PI 7.31 introduces a Java only version of PI. This obviously is much more efficient for message processing. However, many existing XI/PI customers have built processing logic on ABAP stack.  In this blog, we’ll look at the steps that can be carried out to create similar functionality on Java stack. I hope the information will be useful and I welcome any suggestions/comments.

I’ll take a sample use case – dynamic receiver determination based on custom table entries. ( i.e. based on file name, route the      message to different receivers ). For our discussion, the table will be very simple – it has three columns : id, filename and receiver. Id      is primary key and filename is the field that is compared to pattern match with the message’s filename to determine the receiver      business system. The table is too simplistic and data won’t be normalized but let’s ignore that for now .

As shown in the below diagram, a message may arrive / leave at Java stack but the scenario used ABAP development infrastructure. Of course, it was not mandatory but given ABAP skill set being more widespread in SAP landscapes we had the below situation in many cases.

So in a file to file transfer, the FTP adapters (on Java stack ) will receiver / send files and an ABAP map is used to perform lookup to find the receiver.

The following approach could be taken to create similar functionality on Java stack:

To keep the model simple, we can perform database operation in the servlet itself via JPA and not really go via EJBs. EJBs can be used for more complicated scenarios.

Hence, our development objects will look somewhat like this. 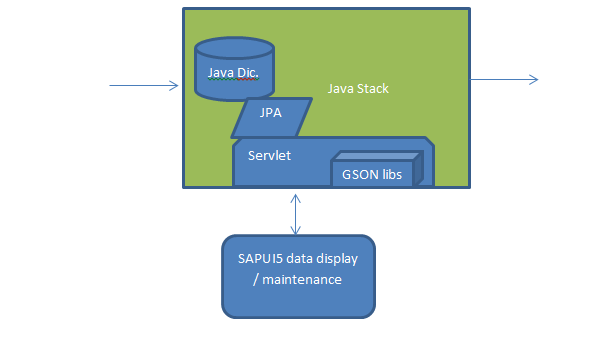 Some customers may still want to maintain the database on ABAP stack ( e.g. in their ECC system / SOLMAN etc .)  and have it replicated to Java stack. In these cases, the messages can be sent to Java AS over HTTP via a RFC destination by tying it in with changes over ABAP tables. In case servlet expects/ returns JSON messages, we can use the standard ABAP class /SDF/CL_E2E_XI_ALERT_JSON_DOC / use SCN’s code exchange to get the JSON tool in case your ABAP system doesn’t have this standard JSON processing class.

In this case, the scenario will look like as below. 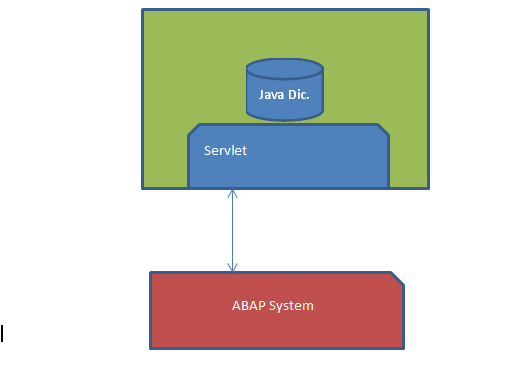 2. Create a dictionary DC. It’ll have an ID column and FILENAME and RECEIVER columns. Based on FILENAME, we’ll determine the      RECEIVER.

Create dictionary and deploy it to SAP Java Server.

3. Create an EE application of type “Web Module” and perform the following steps:

It should already have the below annotation.

As we’ll use key generation from a different table (TMP_KEYGEN) , the below annotations are required.

Update persistence.xml to change the transaction type as Local as we’ll be managing transactions in servlet code while persisting data.

RetrieveData servlet will return all values in the database. 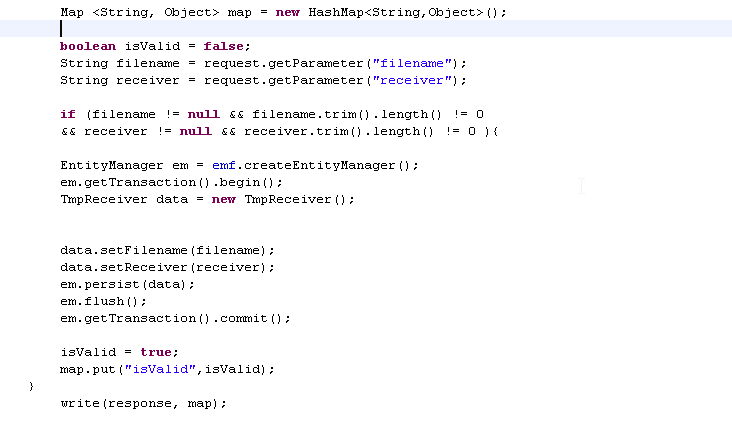 write( response, map ) is a helper method has been written to write the JSON response – it’s the last 3 lines of the previous servlet.

Nothing too fancy in html file – it calls the main view.

And code to trigger POST. We just display an alert message . 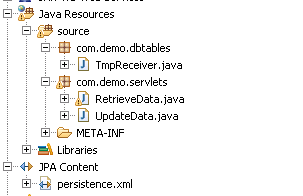 and files for UI in the web module: 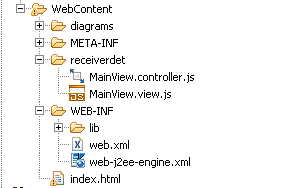 This is how the project DCs look.

Dictionary DC was created and deployed separately as it doesn’t have to be part of this EAR.

detcvr: It’s the webmodule – It has servlet , views as well as JPA generated entity file.

dtrcvear: It is our EAR to deploy the application to SAP AS Java.

This is how the screen turns out to be. We can maintain values :

And entries are dsiplayed using the “Display Routing Values” tab.

To test in PO, create an iFLow with two receivers, one default and the second one will be determined based on Java map which will perform a lookup on the table to get the receiver business system based on filename. Configure Routing with Dynamic Message Router

and process two files: First with an arbitrary name and second one has name starting with IN which was updated in our dB by SAPUI5 application. Based on the table entry, the message is routed to BS_DUMMY_IN business system.

The code for this project can be referred at https://github.com/viksingh/PIDYNAMICRCVDCs .