I watched this webcast yesterday with Jenni Lewis who is an SAP Solution Architect with Global Sponsorship. She said she has the “best job in the world” as she is loves tennis and loves to travel.

What I especially enjoyed was that Jenni showed the business scenarios and then the technology behind it.  I haven’t watched tennis myself in years but I was impressed with the great story and business problems resolved.

Amounts of data created being driven by growth of middle class, with more access to data, technology, data is doubling every 18 months, with the velocity of data – frequency of changes

Jenni explained that in non-grand slam tennis tournaments that coaches can walk on the court with their match statistics, deliver statistics courtside so can have conversation with player

SAP has tennis “Ambassadors” such as Andy Roddick help tells the stories and do appearances.  SAP has sponsored two tournaments  – one was the SAP Open which ended as it moved to Brasil. SAP is the main technology sponsor for Sony Open in Miami in March.  SAP built the tournament app.

Last month SAP announced partnership with WTA, Women’s Tennis Association.  WTA is a small business, but also is global entity, 54 tournaments in 32 countries.  WTA reaches all staff and tournaments in a timely fashion, with a small IT department.  They use a cloud solution – database and BI view 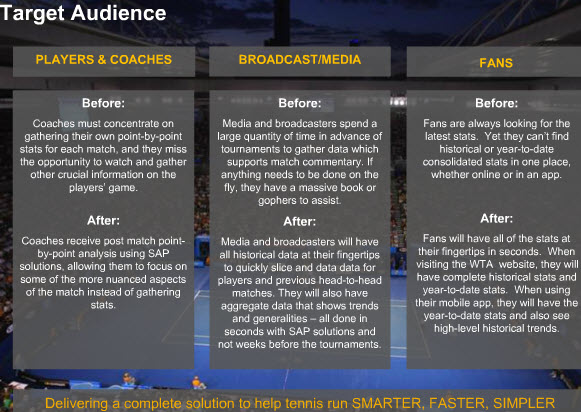 Figure 1 shows the target audience of the tennis applications.  Most of the webcast focused on applications for the players and coaches. They signed an agreement to have access to 54 tournaments a year so they can look at season performance. 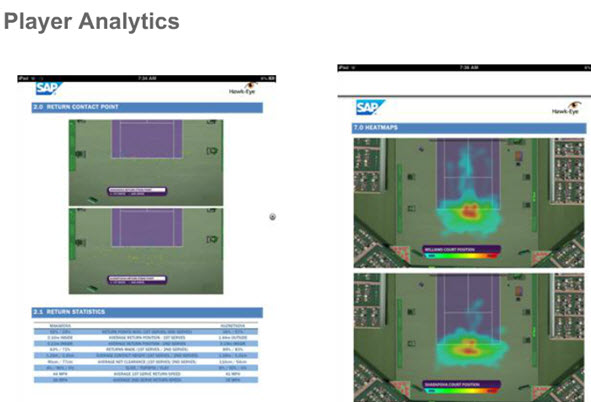 Left of Figure 3 shows player analytics and the court position Serena stands in the middle of the court

Serena is aggressive and doesn’t care who serves her,  will serves

Coaches can slice and dice 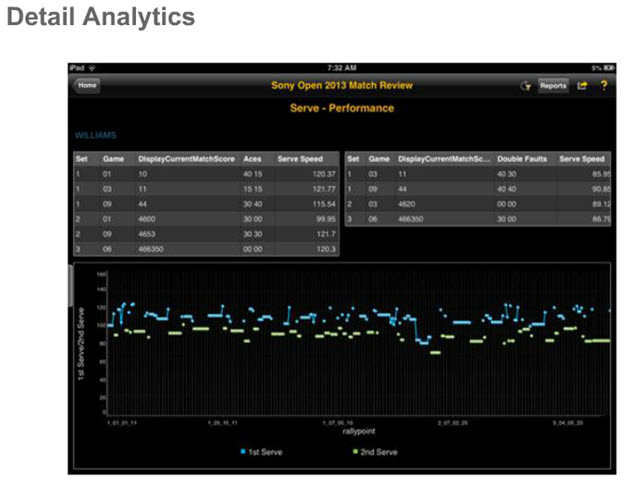 Figure 5 shows the analysis of Serena’s serve and when she was serving those aces; you can drill and see

Patterns of play will let you see what is going on

Is there a trend across multiple matches?  Mornings and evenings?  This is information for her coach. 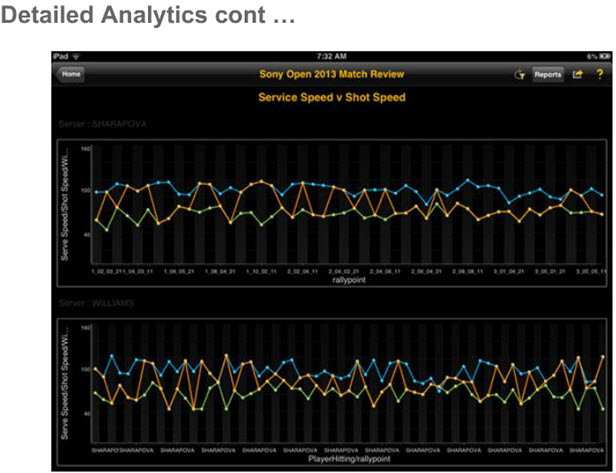 Figure 6 shows Maria Sharapova and Serena’s speed shots and whether they won the point.

This is a Web Intelligence report behind the scenes. 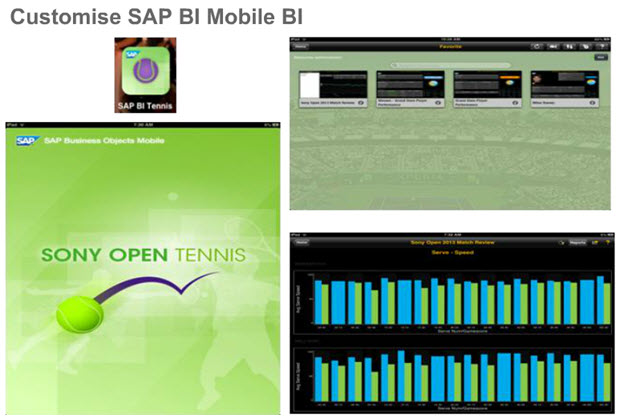 Figure 7 shows the technology used, including the SAP Mobile BI app.  The Mobile BI SDK  was used to customize the look.

The out of the box solution and re-skinned using SDK

This application is used by the players, coaches, media 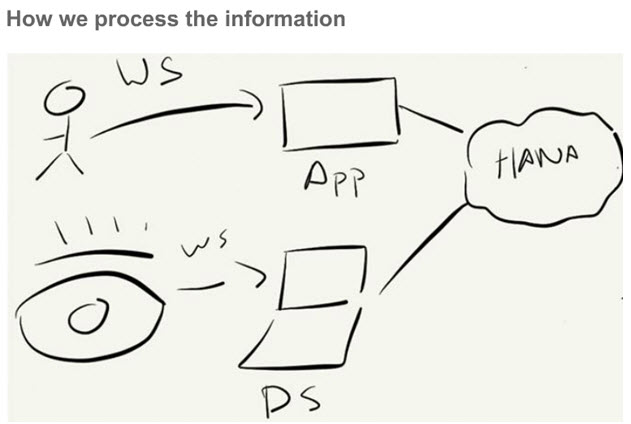 From umpire – built an app to interpret that

Jenni said they use Data Services from Hawkeye for data cleansing, manipulation, both are fed into HANA in the Cloud

They have real time and process information 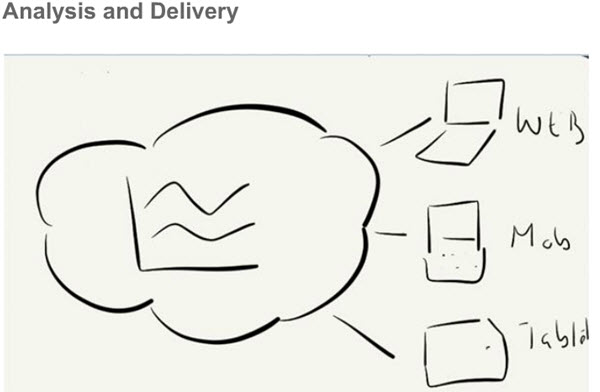 The WTA staff uses BusinessObjects Explorer and look up obscure things asked – number of nationalities are playing; not everyone travels with PC – access with mobile

The media uses it to tell story, use images, and look up what is going on 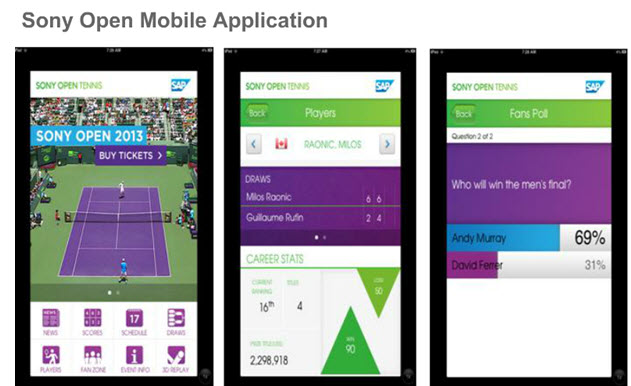 Figure 10 shows the fans Sony mobile application, so fans can have their say, and see what everyone else is saying 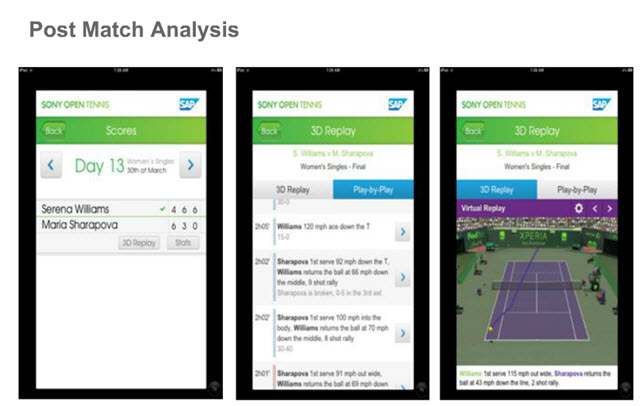 It also offers a virtual replay – coaches; analyze “what Serena was doing” without watching 3 hours of footage 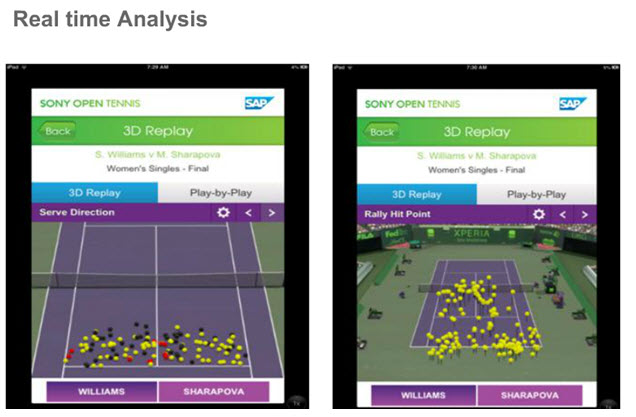 Red balls are the aces she served

For me?  No, I am not up to speed on tennis...will defer to Kirby Leong , a true tennis expert.  But great idea just the same 🙂