The Start of a “Beautiful Friendship”

SAP Mentors make a real difference to SAP business, technology and community ecosystems. The Mentors are a super-smart, engaged global cohort of nearly 130 experts in all things SAP—customers, partners, employees, bloggers, consultants, business people and technical wizards—nominated by peers in the SAP Community Network and selected by SAP. Blog posts like this one aim to demonstrate SAP Mentors’ effectiveness in enriching the culture, and the business value, of SAP.

In May of 2012, Bloomberg reported that SAP AG was acquiring Ariba, Inc., an industry-leading business commerce network, for US$4.3 billion. According to SAP’s co-CEO Bill McDermott, the purpose of the acquisition was to obtain “the DNA in the cloud” because “SAP is probably the most strategic player in the cloud space.” Four months later, in October of 2012, SAP announced the acquisition’s completion; despite this, the overall implications for SAP customers and partners remained vague.

What did the acquisition really mean for SAP customers and partners?

During acquisition and post-acquisition phases of a merger, customers and partners are typically in the dark, unable to tease out important implications, in part because Securities and Exchange Commission (SEC) regulations state that “materially relevant” communications are prohibited before the acquisition gains regulatory approval. In the case of Ariba, this meant that SAP employees could not openly share what the acquisition might imply, making it hard for key SAP stakeholders to mitigate potential risks—or plan for emerging opportunities.

During this process, Mark Finnern, chief community evangelist for the SAP Community Network, was struck by a brainwave. He realized that those SAP Mentors who were not SAP employees—and that’s most of them—were permitted to discuss the acquisition. So at the SAP Mentor Monday monthly webinar series, he opened the floor for SAP Mentors to comment on the Ariba acquisition.

SAP Mentors as well as SAP customers and partners participated in what turned out to be a dynamic, engaged and interesting call. But Finnern didn’t realize there was a surprise in store—an Ariba executive was listening in. That executive, it turns out, was Joseph (Joe) Fox, vice president of strategy at Ariba.

During a “silent period” when Fox couldn’t speak freely about the acquisition, he came across SCN online, created a public account, searched around and discovered the SAP Mentors.

“I searched the word ‘Ariba,’” says Fox, and there was an SAP Mentor webinar event, which I signed up for. During the call, they were talking about what the acquisition meant. As I listened, I thought, ‘The format is nice, it’s dynamic, but even better there’s a great culture on that call.’”

After the Ariba acquisition gained regulatory approval, Fox by coincidence bumped into Finnern at SAP TechEd in Madrid. He said, “I’m more than happy as VP of strategy at Ariba to have a call and talk about the acquisition with the SAP Mentors.”

So, Finnern scheduled a follow-up SAP Mentor hangout, where Fox discussed the importance of the Ariba network to SAP, which assets of SAP could be integrated with Ariba and other topics. 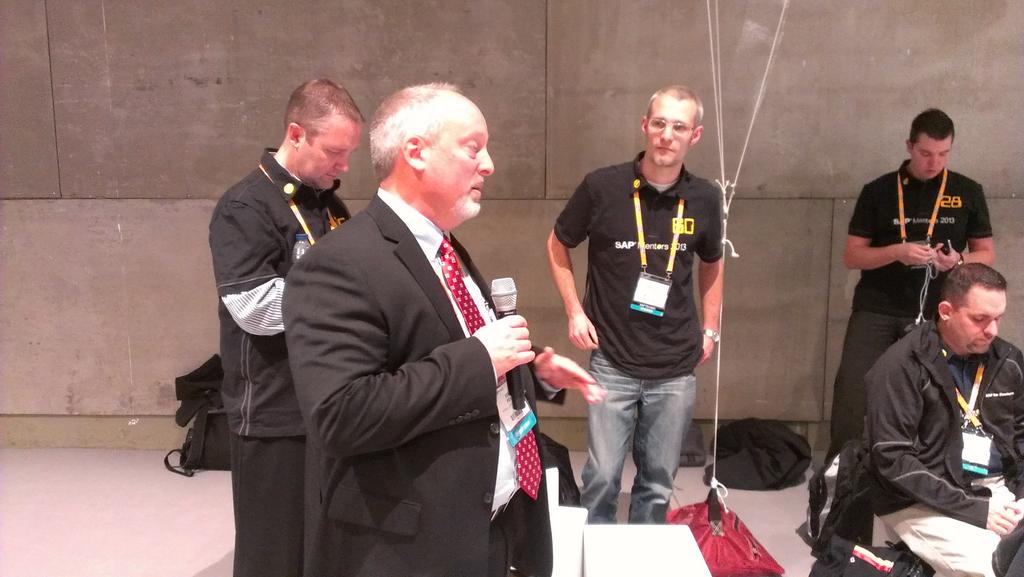 “We have more than a million sellers that are small sellers,” Fox says. “So I sent the idea [that came out of the meeting) of an Ariba business connector that could be built into Business One to our integration team because there was this opportunity to integrate.”

A team within Ariba was formed and the Ariba Business One connector was fast tracked and announced at SAPPHIRE. That said, according to Fox, it was possible that other people within the integration team had also come up with the same idea, so the origin is still not one-hundred-percent attributable to the Mentors.

That said SAP Mentors did indeed play a part.

“The open dialogue during the call yielded a broader set of opportunities,” says Fox. “For example, lots of threads of communication went across the community and the Mentor call brought to my attention a number of new things that were compelling enough that I sent them to the post-merger integration team.

“The SAP Mentors helped me to connect with and navigate 19 different organizations within SAP, so between October of 2012 [when the completion of the merger was announced] and February of 2013, I was busy making connections.

“It was continual and it’s clear that the SAP Mentors provide a great platform for having a dialogue and also for interacting with the SAP ecosystem.”

In summary, the Mentors provided SAP’s new Ariba employees with a channel into the SAP community.

This past July, Fox held a cloud strategy briefing with the Mentors. “As we become more integrated,” he says, “there will be more cross-pollination through the Mentor process and we’ll step up more.”

A: Well, it made a lot of things easier. The Mentors went out of their way to educate us on SAP language, culture and people.

Q: What are your thoughts on SAP Mentors?

A: From the co-CEOs all the way down, I’ve only heard positive input within SAP about the Mentors. People are positive about their value to the whole. Also, the Mentors are representative of SCN members whose careers are tied to SAP, from partners and customers to vendors. So it’s a rich ecosystem.

Q: What’s the status of the acquisition and what do you hope to learn from SAP?

A: The combination of SAP and Ariba is going well. Ariba is traditionally very business solutions-focused company, from on-premise, to cloud, and business network offerings. Now that we’re part of SAP, we need to build a culture of working with IT and the SAP Mentors are helpful with making it easier for us to adapt to the IT culture. We don’t have that DNA and tradition since we have typically sold Ariba solutions to business leaders versus IT leaders. Today, as a result of the Mentors and SAP, we’re making that transition very fast and it’s possible that our cultures are so aligned that very soon we won’t even see an SAP or Ariba difference.