Bill McDermott on SAP and Sustainability: “This is a whole new generation” 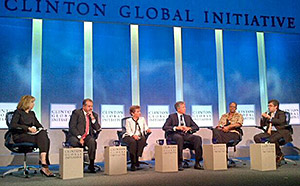 I’m going to venture a guess that most people have never heard of the Clinton Global Initiative (CGI). But for those in the know about sustainability and CSR topics, this initiative — part of former US President Bill Clinton’s foundation — is one of the foremost catalysts to bring global leaders together and address the world’s most pressing challenges.

One of CGI’s main strategies is to connect global leaders from widely diverse organizations. The  panel reflected that, comprising two CEOs (Bill and the CEO of Dow Chemical), the executive secretary of the UN Convention on Climate Change, the director of a Kenya-based “Institute for Peace and Environmental Studies,” and the president of a Latin America-focused development bank.

Nancy Gibbs, managing editor of TIME magazine, moderated the plenary session and started with the idea that, in regard to sustainability, it’s time to “move from sentiment to strategy.” In other words, stop just talking about it and start doing something.

Gibbs addressed the first question to Bill, asking him to talk about one of his favorite topics: industry transformation and its impact on the world.

Noting that SAP was forced to reinvent itself in 2010, Bill said the company was determined to make the world run better and improve people’s lives. He believes this focus especially resonates with younger generations. “This is a whole new generation,” he said. “Millenials have a different set of what is important vs. baby boomers. Eighty percent of millennials say their purpose is to help the world rather than to just do something for their own personal recognition.”

In later comments, Bill talked about SAP’s unique position at the intersection of many groups. “We’re very fortunate because we’re in between the public sector, the private sector and many of the best run governments and businesses in the world,” he said. “We can take best practice, share it, and commercialize it. So this idea of sustainability for us wasn’t just that we were doing the right thing, it’s really good for business.” He also noted that “you have to involve people in the choices that companies make” in order to truly affect change.

Andrew Liveris, chairman and CEO of The Dow Chemical Company, agreed that people are the “touchpoints” needed to make things happen. “We have 38,000 suppliers and 60,000 employees,” he said. “Every single one of them is a point of influence to cause the revolution that’s required in the way the planet has to be run.”

Liveris believes the big businesses represented by the Fortune 200 can make things happen. “That’s my dream,” he said, noting that companies “need to move from dialogue to ‘do.’”

However, the three leaders representing NGOs cautioned that efforts must be “scalable” to succeed in the long term. “As long as we only design for the small scale, we won’t make an impact. We need to put together scalable, collaborative efforts,” said Wanjira Mathai, director of a Kenya-based NGO.

Public-private partnerships are also key, said Luis Alberto Moreno, president of the Inter-American Development Bank. “Countries and industries must work together to conserve resources in the face of huge population growth,” he said. “We have to address the gaps between all the groups working on the same things.”

Hmmm, that sounds familiar, doesn’t it? SAP has built its business on bringing industries together and bridging knowledge gaps within organizations and outside. Modern technology and big data can make an impact on business networks, giving companies transparency into their networks and allowing them to track key sustainability metrics and get alerts when things go awry. This leads to strategic sourcing and companies being more responsible. As Bill said, “You can choose to do business or not do business, based on [what you know about a company’s] sustainability practices.”

But above all, flexibility is key. “Co-innovation and business model innovation” will drive companies in the future, said Bill. “The consumer [will tell] you this is what they need. Technology will change resource use. You will have to completely rethink your business model to meet the needs of the future.”

[You can watch a replay of the panel discussion on the CGI website.]