SCN Ten Years On: Will SAP HANA do for data what Blogger did for words?

In September 2003, a new project called the “SAP Developer Network” approached the advanced BI development team in Palo Alto for content.  I was a writer on that team, and together we decided to put one of the first packages for download on the network, the (clearly famous) XML for Analysis Client Sample.

It was therefore exactly ten years ago that my account was “activated” on the SDN. And that was only the beginning.  We followed this up by using the SDN to publish the greater project we were working on, the BI Java SDK, as well as its full HTML-based documentation set, which was my responsibility and of which I am still mightily proud.  Without the SDN our product itself would not have had this same kind of distribution opportunity.

In fact, the new SAP Developer Network (later rechristened SAP Community Network) heralded a new era of openness itself at SAP. In the months that followed, indeed many seemed to internally scramble to understand how to guide (and control) the fact of being able to publish – seemingly anything – online.  We received messages from Global Communications about how this was an external platform – that things we published could be read by customers – and that we should behave accordingly.  Imagine! People will actually see the things we write!

As a blogger since 1999 (almost since the original Blogger platform launched), I already had a strong sense of the disruptive potential of blogging, but the effect on the enterprise, also internally, was just beginning. Blogging was the beginning of nothing short of the democratization of communication itself – and the disruption of the related communications related industries, and, a bit more slowly, internal communications. 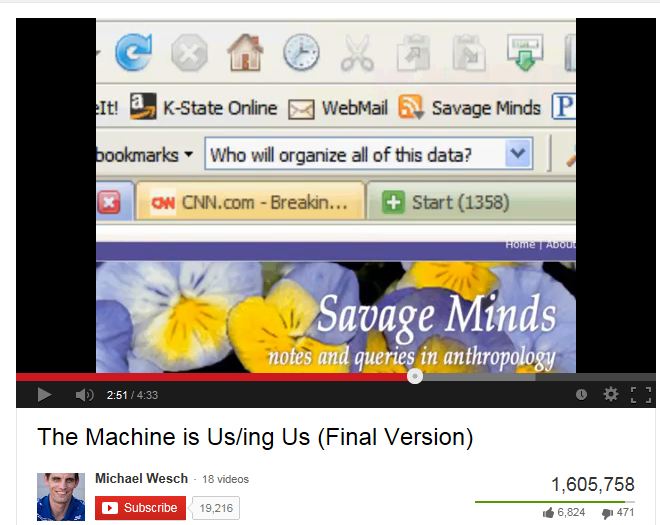 It took the unique perspective of a cultural anthropologist from Kansas, Mike Wesch, to contextualize this artfully, technically, and insightfully. (It was writing about the privilege of meeting this fellow that led me to one of my most rewarding relationships at SAP, with Marilyn Pratt.)

“Text is linear,” Wesch began in his seminal Web 2.0 video in 2007 until finally he ponders: “Who will organize all of this data?”

We will.
You will.

We’ve already spawned our own “Mike Wesch’s” here on the SAP Community Network who write about the new opportunities.

“The emergence of a new breed of enterprise applications that combines the best of both worlds and brings analytical insight to the operational applications where users make real-time business decisions,” writes SAP Mentor and SAP HANA entrepreneur Thorsten Franz in Betting My Livelihood on the OLTP-OLAP Convergence: Meet operatics, Thorsten’s HANA Startup.

Analytics, once the province of a specialized training, will be accessible at fingertips from those who enter the data to those who walk around with devices capturing and sensing the data in the first place.  We can only yet imagine what world you — we — will create.  I can’t wait to see the changes in this world ten years on from now.

Happy Birthday SAP Community Network, and many many more! Hello World! or: How I Learned to Stop Listening and Love the Noise (2008) –  by Jason Eppink on Flickr via Creative Commons

The Democratization of Data

Wow, impressive that you have that first e-mail and congratulations on 10 years and cheers to the next 10+ 🙂

Right Tammy Powlas ? Pretty geeky of me to save those mails (yes there are others I saved - from Mark Finnern : )   )

Nice blog Moya. Amazing 10 years journey! Am much impressed by your first e-mail from SDN; You joined SDN on September 23,2003 and published #SCNis10 blog on September 24, 2013; exactly 10 years and coincidentally both are Tuesdays 🙂

really impressive with that email notification.