Happy tenth birthday SCN! It’s been an amazing ride – I’ve been a part of the community for 7 of its 10 years.  Through my involvement, I’ve learned what the secret sauce is behind authentic, effective social media engagement.  It’s this: When there is substantive sharing of valuable information between people who are passionate about their community of practice, a kind of commerce emerges where those who receive benefits give back, naturally, out of genuine caring about the entity they are creating together.

Before I digress and start preaching about “social media – reality vs. hype”, let me stay on point, which is what happened in 2009. As amazing as it sounds, it was only 4 years ago that a small band of renegades agreed to harmonize the various social channels SCN had on Facebook, Linked In, You Tube and Twitter into a coherent set of unified channels that were an extension of SAP Community Network. Here’s a video where I share my thoughts on being a part of this moment in SCN’s history:

This was a novel idea. I’m going to be a bit of an anthropologist here, telling the story from the bones I find in my emails and saved files. 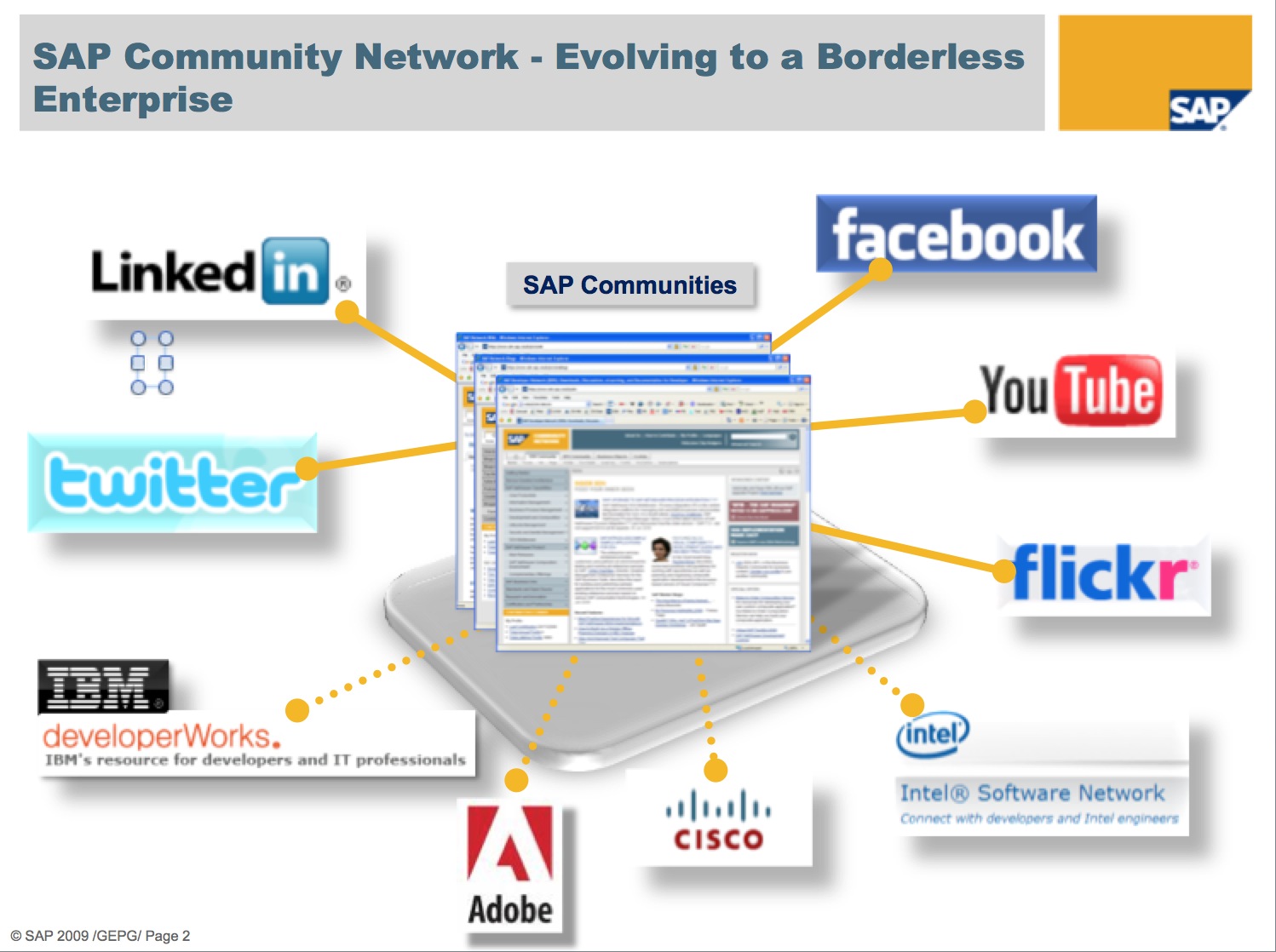 At this time, the core pitch for SCN was still the features, forums, blogs, wikis, eLearning, articles and downloads. This is where the heart of SCN’s success remains. This is illustrated in a slide from July 10, 2009, a pitch to partners: 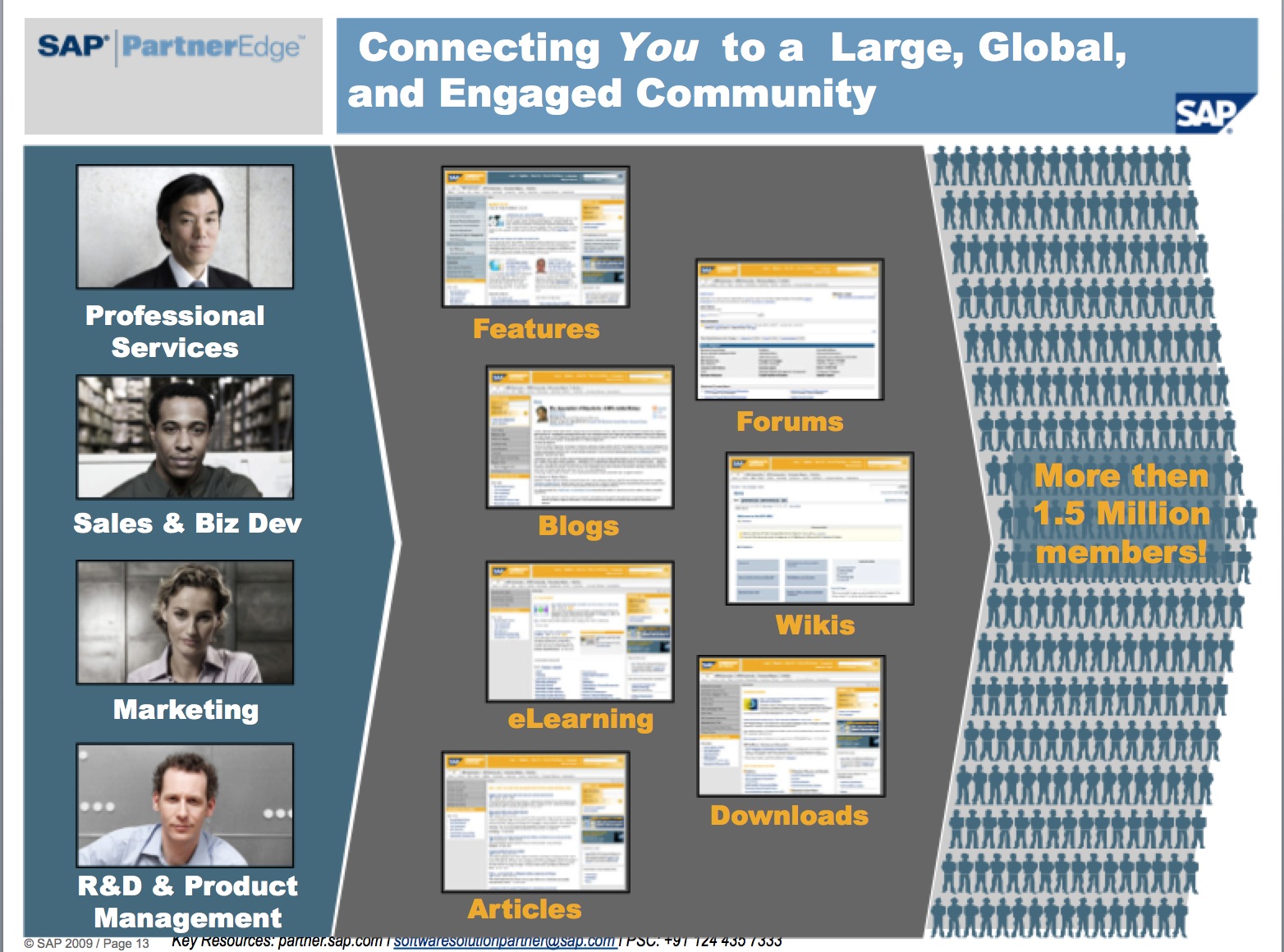 Between July and December 2009, we roped in all the activity and branded it as SAP Community Network. What happened in between to create these channels?

As I scroll through emails from late 2009, I see the following names:

Sylvia Santelli (officially joined  Jan 1, 2010, but a big part of the story)

The specified item was not found., of the Social Media Group

Craig Cmehil Cmehil had the Facebook page and had set up the SCN auto-feed for SCNBlogs.

Marilyn Pratt Pratt had a hand in our Twitter presence too.

Mark Finnern had an active Twitter presence with the SAP Mentors.

We went about the work of creating templates that were uniform, messaging that was uniform, designing a community manager “role” and performing it at the same time. “Building the plane while flying it”, as we used to say.

Here are some now shocking views of the early channels (My, how UI has changed!) 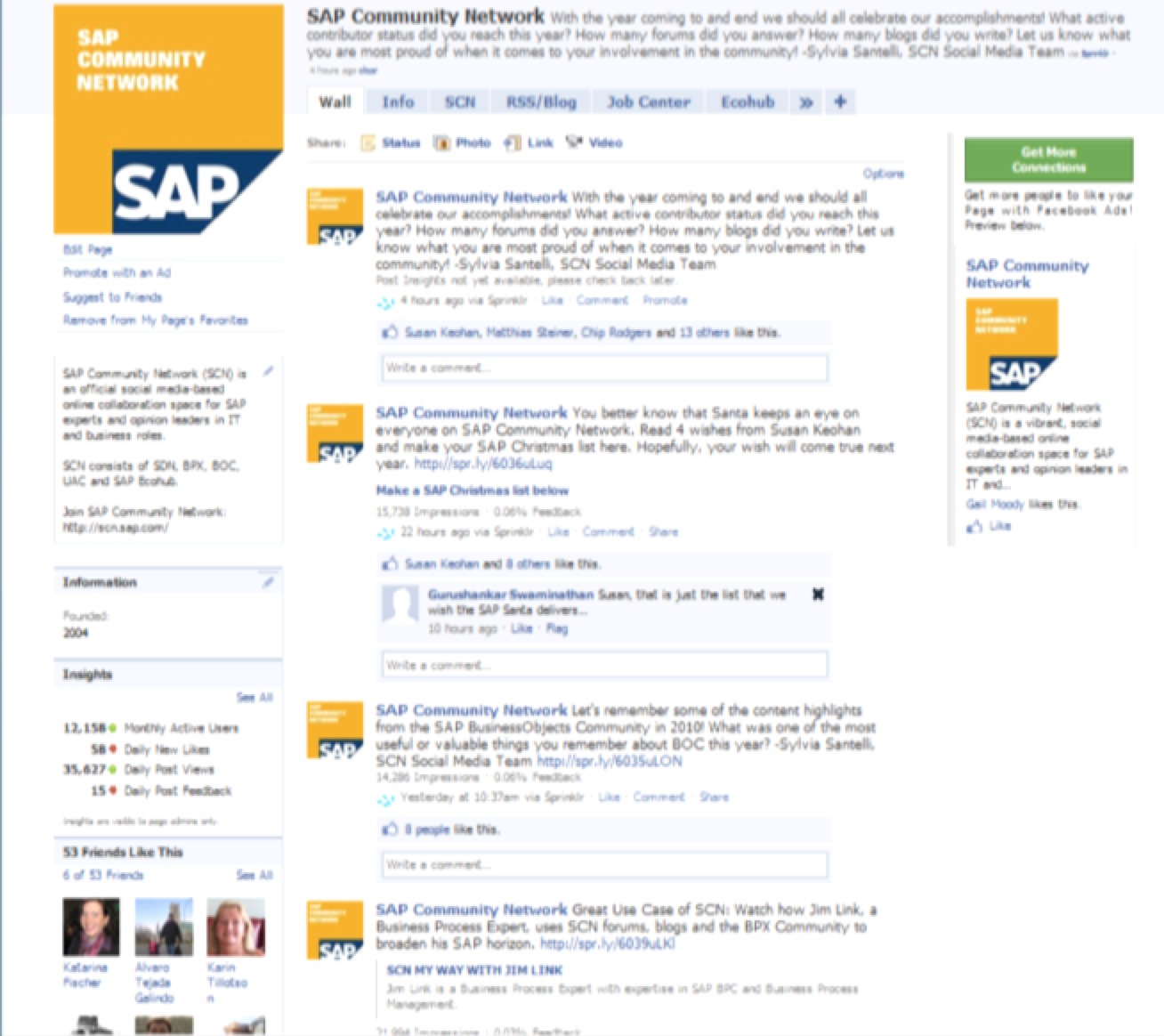 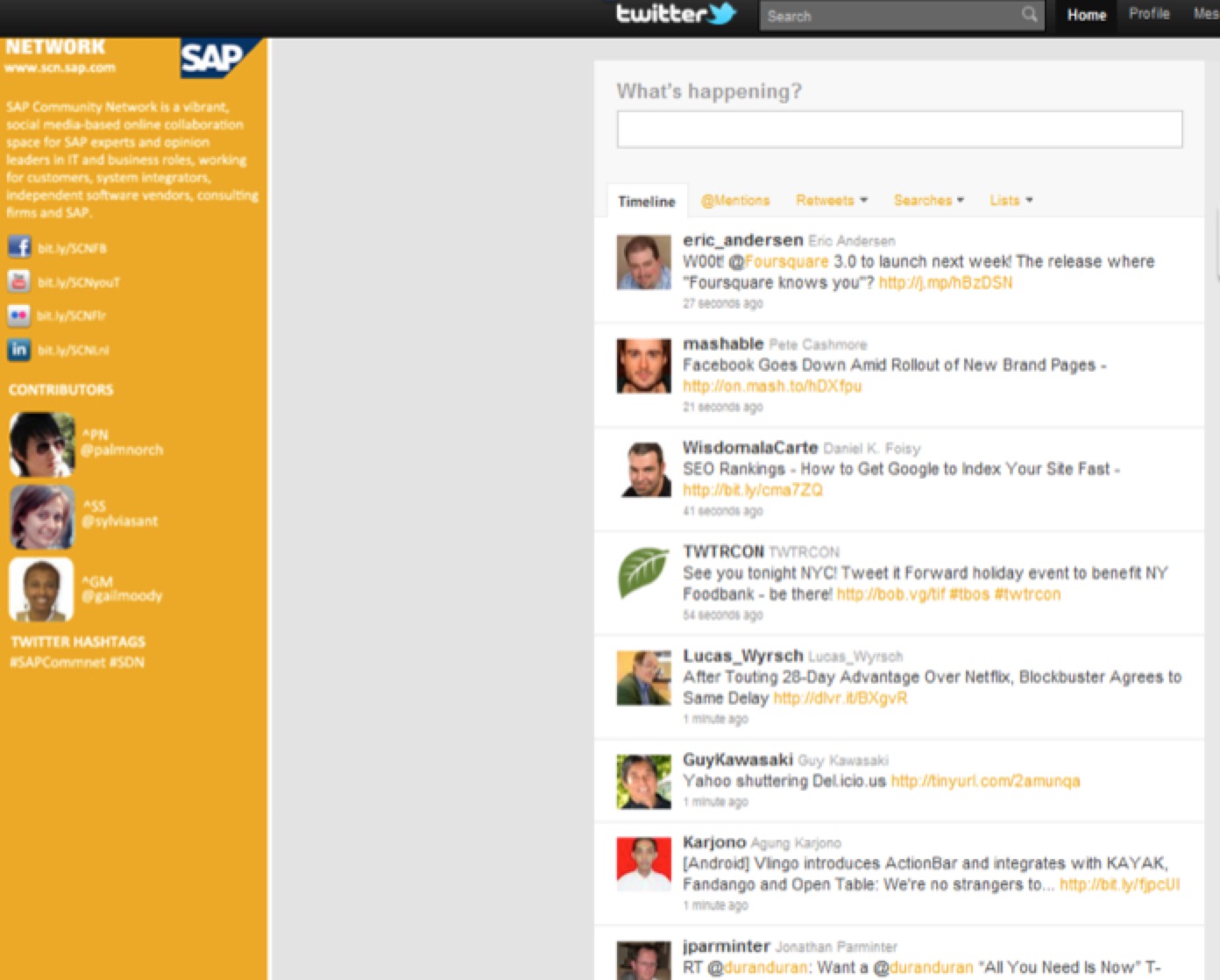 Before I close, a personal note about the importance of SCN personally for me over the past 7 years. This is an amazing community with so many impressive people who live lives of integrity on a personal and professional level. I have been welcomed and even encouraged to embrace my inner girl geekiness by the attitude of the community to show up “as your authentic self”. From Marilyn’s early Design Thinking workshops, through 7 SAP Tech Eds, to all the SAP Mentor marketing and the Jive re-launch I have grown a tremendous amount, in a good way, through my interactions with the community. It’s been a life – altering event that I treasure immensely.

Anyone else remember the social channels launching in 2009?

Thank you. What made it interesting to you?

Your video and the history about the SCN channels!

that does bring back a flood of memories.

Ironic that we worked with The specified item was not found. early on and now she's "THE BOSS" :-).

Wishing SCN a wonderful next 10 years. I am sure Maggie will take it to the next level. It's so inspiring that she joined, I almost wish I were still there (if I did not enjoy working for myself so much) :-).

Yes, funny how the world works. I have fond memories of all of us figuring it out together. Seems so long ago, especially looking at the screen shots. Those were good times and gave us hard core lessons on how this works. Miss you - wish you were here too - to help make the place ROCK even more! Come by sometimes.

thanks for the kind words.

I have to agree, without SAP, I would possibly not be in social media right now.

As John Lennon said: "Life is what happens when you make other plans" :-).

SCN has grown and so has the social media side, which continues even further with SCN on Flip-Board managed by Jason Lax - I find the Flip Board is really good at capturing SCN information I may have missed.