Just a couple of weeks back, when I was surfing other forums\spaces in SCN for one of my reporting requirements, I came across the Data Geek Challenge and subsequently SAP Lumira ;some initial analysis followed and I made up my mind to take up this “Challenge” 🙂

So, lets start……In today’s World arena, population growth is one of the key factors in determining the Country’s future, as it impacts both the economy and the environment. Rich and poor countries alike are affected by population growth, though the population of industrial countries are growing more slowly than those of developing ones.

In this blog, I have tried to analyse the population growth in the Australian Continent across its States and the Local Government Area’s (LGA) over the last 11 years (2001-2012) with the help of SAP Lumira.

For performing my analysis, I have used the statistics available in the catalogue number “3218.0-Regional Population Growth, Australia, 2012″, from the website of Australian Bureau of Statistics (http://www.abs.gov.au/).

(a) Area (in Sq. Km) for each of the Local Government Area (LGA) for each state.

(b) Population for each of the LGA for each State

(a) What is the trend of the population growth in Australia over the last decade?

(b) Which States contribute to the population growth trends?

(c) Whether the population growth trends has any dependency on the States in terms of area/sq. km over the last decade?

(d) Which Australian Cities\Local Government Area have the potential of being termed as “Crowded Cities” in future?

Lets see… if SAP Lumira can find out the answers for me…. 😏

The data set that I used contained Area (Sq.Km), Population and the Population density corresponding to each Local Government Area (LGA) and States for years between 2001 and 2012 as shown below- 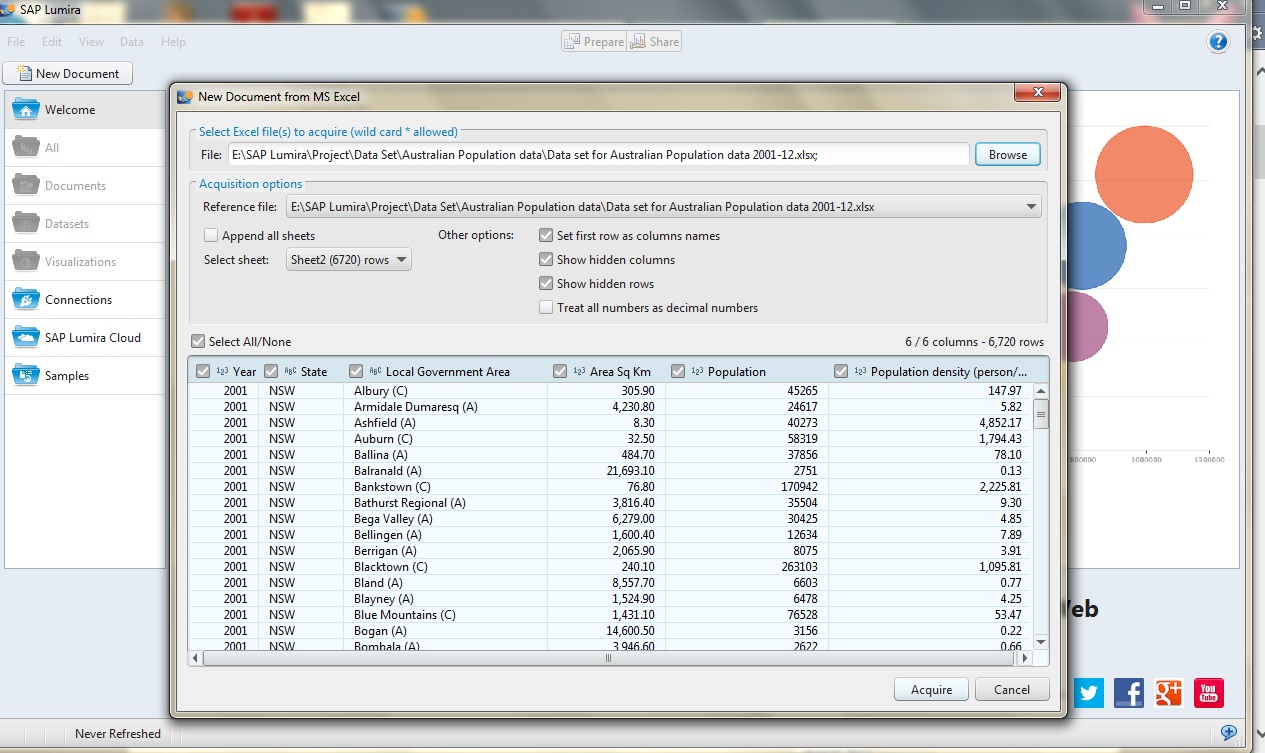 It took only a split of second to upload the data;liked the response time. 😉

(a) Population Growth Trend Over the last decade.

To find the trend, I created measures for Population and Area (in Sq.Km) and placed them on the Y-Axis and year on the X-axis respectively and got the following visualization- 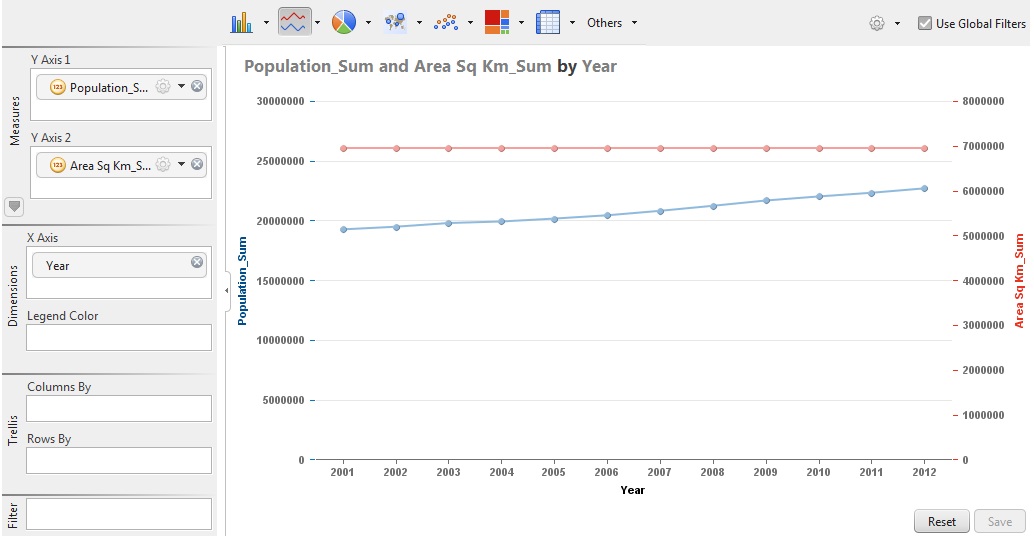 This graph clearly states the increasing trend of the population over the last decade. However, increase has been significant over the last five years starting from 2007

(b) States Contributing to the Population Growth Trends

To find the States,  I created a measure for Population Density and placed them on the Y-Axis and year on the X-axis respectively and filter them out by States by putting the State attribute in the Columns by axis and got the following visualization- 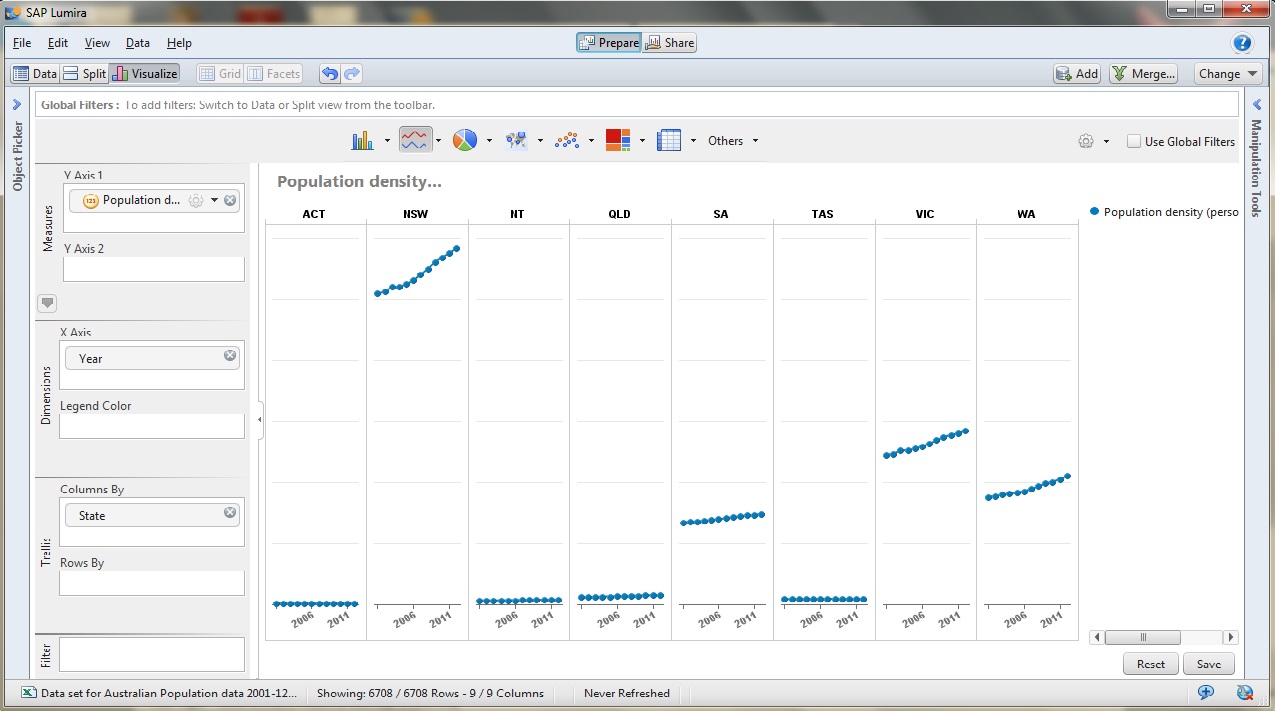 From the above visualization, it can easily seen that the NSW (New South Wales) is the main State which is contributing to this increasing population growth. The other states that follow are VIC(Victoria),WA (Western Australia) and SA(South Australia).

(c) Dependency on the States in terms of area/sq. km for the Population growth over the last decade

Firstly, I found out the States in terms of their area and got the following visualization- 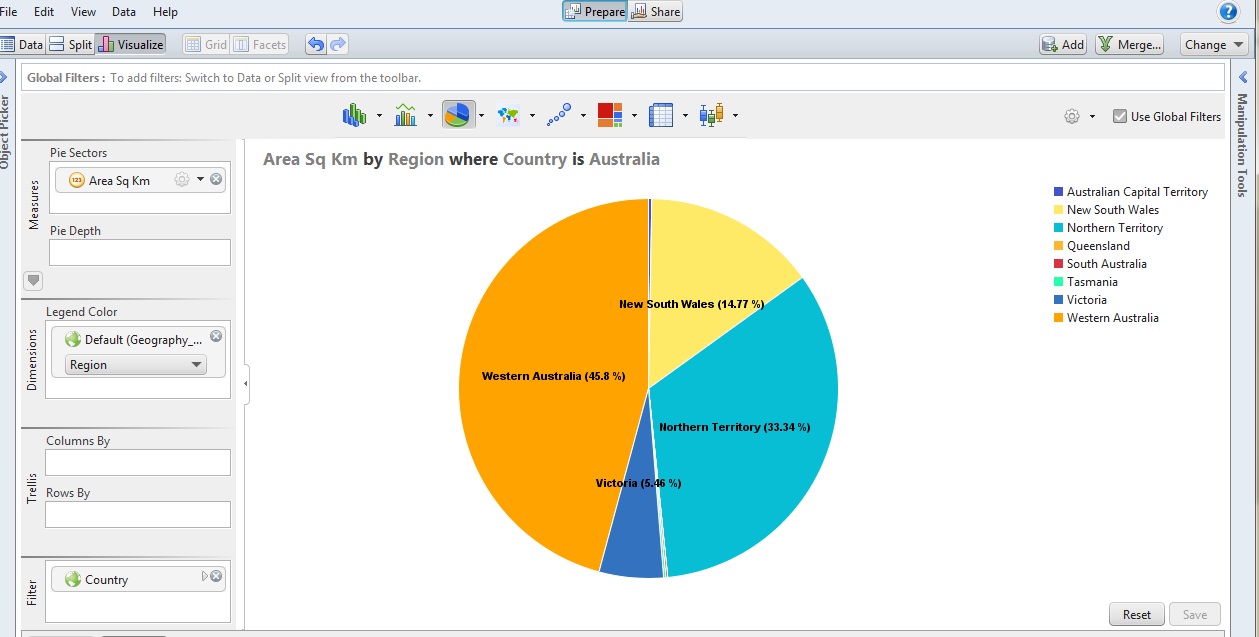 So we can see, Western Australia alone comprises nearly half of the area of total Australian Area followed by Northern Territory, New South Wales and Victoria.

However, when I plotted the Population against the various States, the results were quite un-believable.. 😯 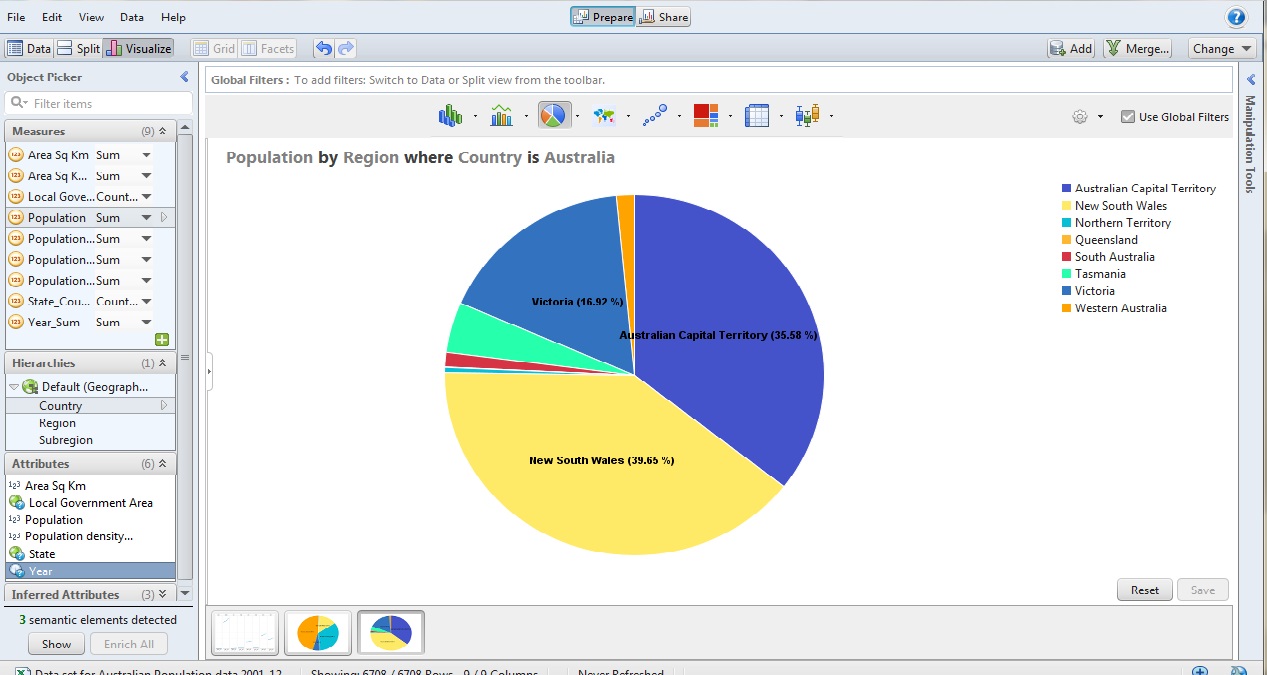 1. Western Australia and Northern Territory are the largest two state in terms of Area, are not listed in the top three states in terms of Population.

2. Australian Capital Territory  (ACT) which comprises only 0.28% of the total area is the second largest state in terms of population.

So we can clearly infer that Population is not Area dependent in Australia. Moreover, we also infer that the three Eastern Australian States comprise more than 90% of the total population. 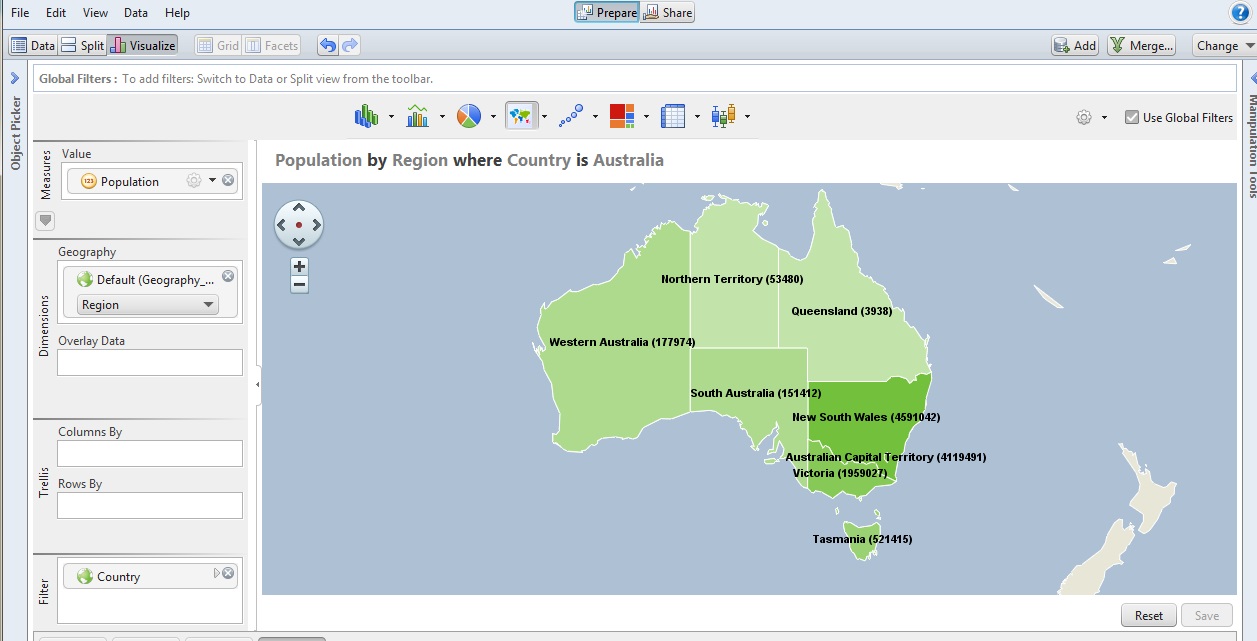 For performing this analysis, I used the Population density measure in Y-Axis and used the local Government area in X-axis and get the following results- 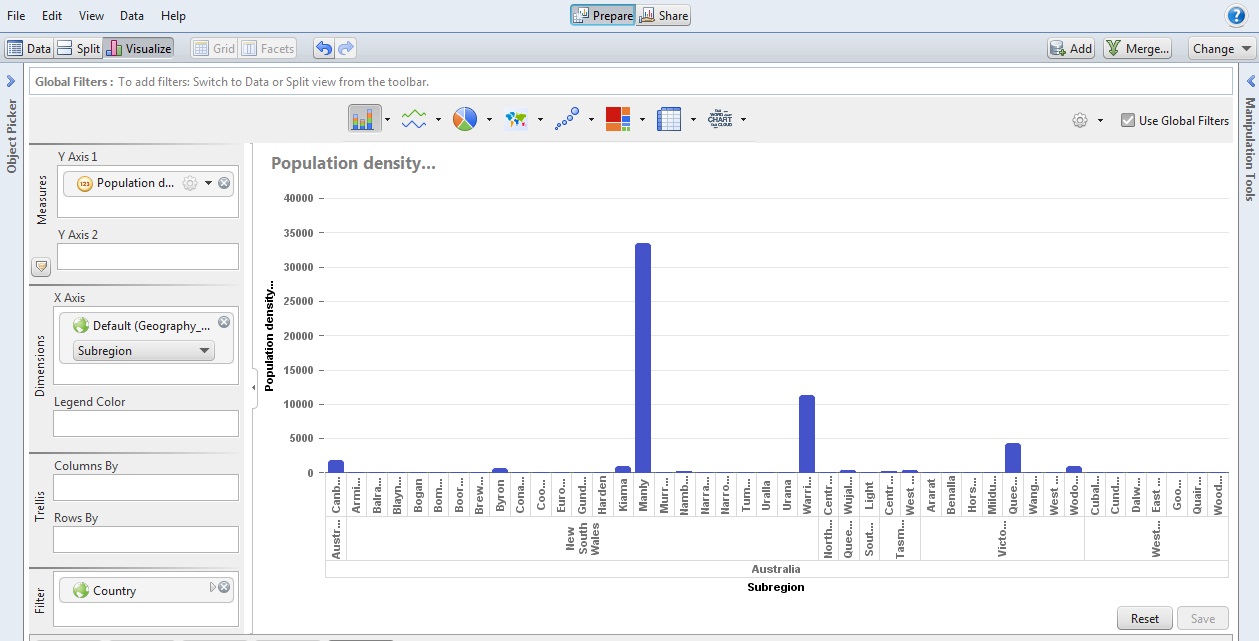 Selecting the top 3 cities over the last decade we get-Manly and Warringah in New South Wales and Queenscliffe Borough in Victoria. 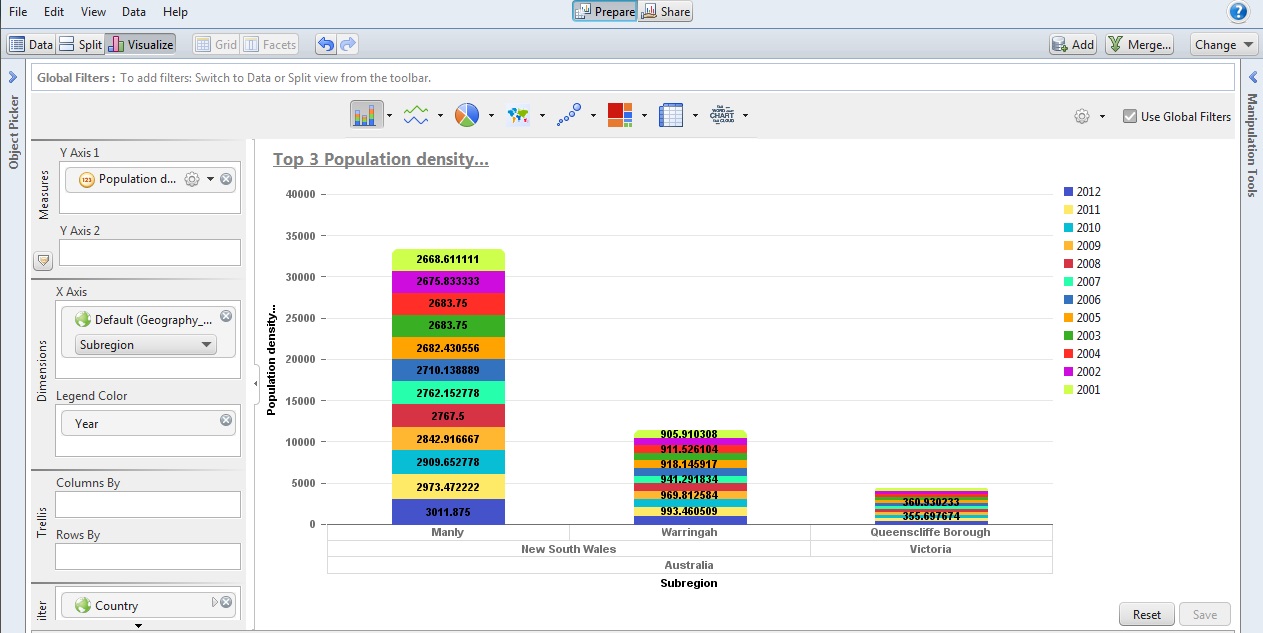 The Population density is the highest for these three LGA’s in Australia and is having an increasing trend over the last decade.

So, that’s it…..SAP Lumira have answers to all my queries and within a stipulated time.

I think its quite a useful tool for analyzing data, drawing meaningful inferences from them and can take decisions based on the inferences.