Audit objects are used to collect run time audit statistics about the objects within a data flow. Using the Audit feature we can collect statistics about data read into a job, processed by various transforms, and loaded into targets.

We define audit rules to determine if the correct data is processed. Also in the event of audit rule failure there is a provision to generate notification of audit failures.

Auditing stores these statistics in the repository for further future analysis. In event of any mismatch in source/target row counts or sum of measures notification can be set, to highlight the audit failure for our immediate action like reload, identify incorrect source data etc.

Now let us see how easy it is to enable Audit option in Data Services. Find below a sample dataflow on which we will Audit the count of Source and Target record count and also will verify the HASH value of character data type columns between Source and Target.

We can enable the Audit option property of the dataflow either by right-click the Dataflow in Workspace or from the Local Object Library. 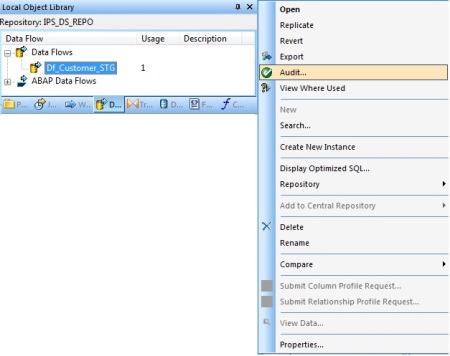 On selection of Audit, we have two tabs namely Label And Rule which is described in details below. 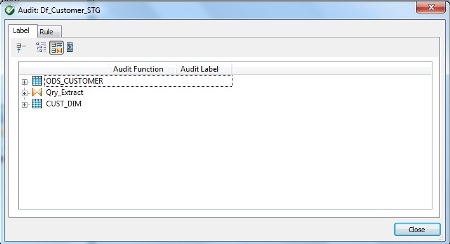 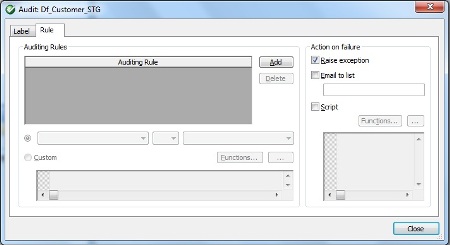 Following are the various available features of auditing:

§  Define Audit Points to collect run-time statistics about the data. E.g. Number of rows extracted from Source, Processed by Transforms, Loaded into Targets

§  Define Audit Rules for the audit statistics to ensure expected data at the audit points in the dataflow.

§  Generate run-time notification for the audit rule that fails i.e. Action on failure and the values of the audit statistics for which the rule failed.

§  Display Audit Statistics after the job execution to identify the object/transform that processed incorrect data in the dataflow.

Auditing Objects in a Dataflow

§  Audit Point – This is the object in a dataflow where audit statistics is collected. i.e. Source, Transform or Target.

§  Audit Label – This is a unique name generated by BODS for each audit function that is defined on an audit point to collect the audit statistics.

§  Audit Rule – A Boolean expression which uses audit labels to verify a job.

The software generates a unique name for each audit function that we define on an audit point and are editable.

If the audit point is on a table or output schema for the audit function Count, the software generates two labels namely $Count_objectname and $CountError_objectname

If the audit point is on a column, the software generates an audit label namely $auditfunction_objectname

There are four Audit Functions available in BODS.

§  COUNT function helps to get the audit information on a table or output schema. The default datatype is INTEGER.

BODS collects two types of statistics when we use a Count audit function. Good row count for rows processed without any error. Error row count for rows that the job could not process but ignores those rows to continue processing. When we specify the Use overflow file option in the Source or Target Editor we can handle the error rows.

Let us now see how to define the Audit Points and the Audit Functions. We can also modify the default Audit Labels generated by Data Services if necessary. 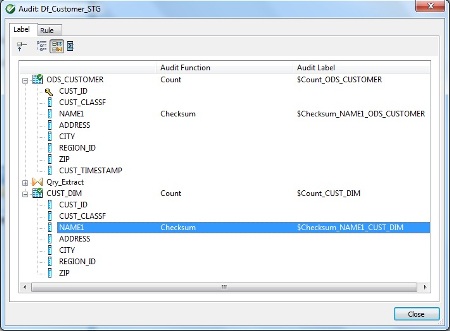 The following Boolean expressions are examples of audit rules:

There are three types of Actions available for Notification in the event of an Audit Failure namely Email to list, Script and Raise exception. We can select either all three actions or can choose any combination of the actions. Find below the order these actions are executed in the event when all the actions are selected as a part of notification for audit failure.

§  Email to list — BODS sends a notification of which audit rule failed to the email addresses mentioned for this option.

§  Script — BODS executes the custom script mentioned for this option in the event of Audit rule failure.

§  Raise exception — The job fails if an Audit rule fails, and the error log shows which audit rule failed. The job stops at the first audit rule that fails. This action is the default. We can continue with the job execution if we place the audit exception in a try/catch block.

We need to the define the Audit Rules related to the Audit Points or Audit Labels. Based on the success or failure of this rule we will generate error message. 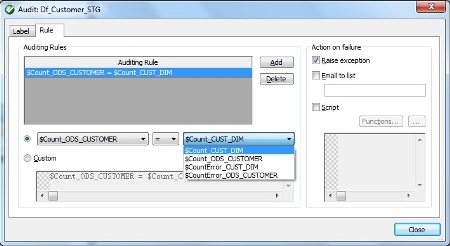 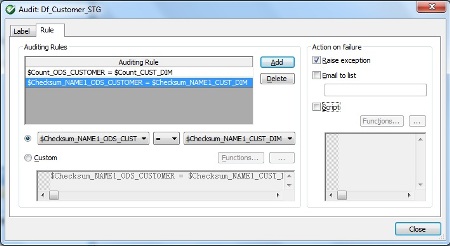 We can find the audit status in the Job Monitor Log, when we set Audit Trace to Yes on the Trace tab in the Execution Properties window of the Job. We can see messages for audit rules that passed and failed. If the audit rule fails, the places that display audit information depends on the Action on failure option that was selected.

§  When Raise exception action is selected and an audit rule fails the Job Error Log and the Metadata Reports shows the rule that failed.

§  In case of Email to list we get notified of audit rule failure via Email message. Audit rule statistics are also available in the Metadata Reports.

§  For failure action type Script the custom script is executed and the audit statistics can be viewd from the Metadata Reports.

§  Passed — All audit rules succeeded. This value is a link to the Auditing Details report which shows the audit rules and values of the audit labels.

§  Information Collected — This status occurs when we define audit labels to collect statistics but we do not define audit rules. This value is a link to the Auditing Details report which shows the values of the audit labels.

§  Failed — Audit rule failed. This value is a link to the Auditing Details report which shows the rule that failed and values of the audit labels.

In case we want to capture or log the Audit Results to Database tables we can use the custom script as:

Thank you 🙂 Very useful and informative