It is Monday morning (a very wet, windy and miserable Monday morning by any standard here in not so sunny Liverpool) and I’m back at my desk, mentally reviewing my experiences from Saturday’s SITMan – SAP Inside Track Manchester…

Firstly, I’d like to thank the organisers – Tim Guest, DJ Adams & Philip Kisloff for pulling it all together for us – the combination of SAP meddling followed up by pies & beer were a definite winner for me, just a shame I was driving and had to disappear early so missed out on lots more beer tasting later on!  Another thanks goes out to the rest of the attendees who were all really friendly and open to sharing – this was my first SIT event but definitely won’t be my last.

Aside from the starting and ending group presentations, there were two streams throughout the day, roughly split as “Coding, etc.” and “Ideas, etc.” which was a perfect way of setting the day up for me.  I went through the following sessions: 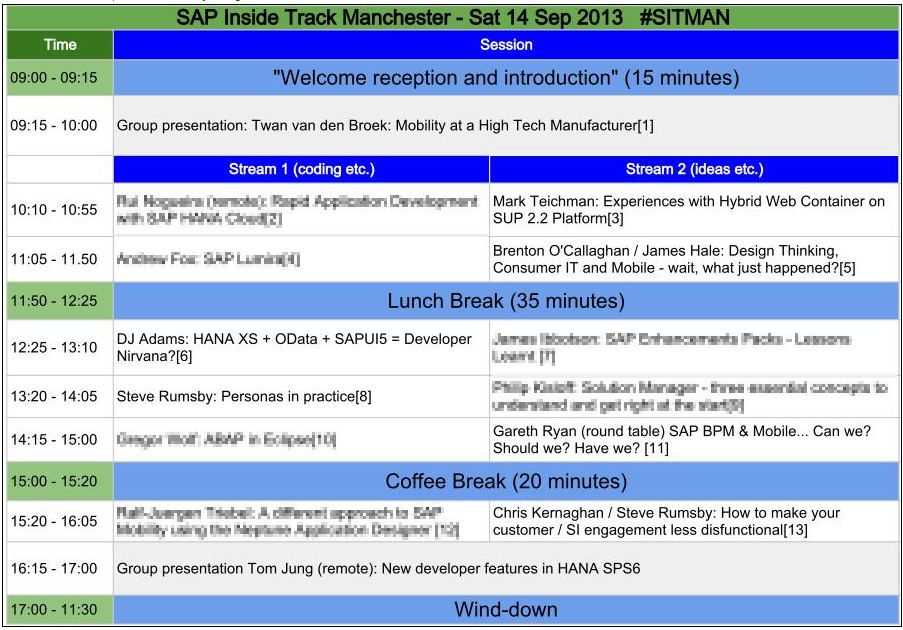 It was clear there was a very definite, almost sub-concious, underlying theme to the content of the day, and that was all around user experience both in terms of technology and ideas.  I think it says a lot about where the industry is currently heading and being challenged, as partners, customers and SI’s all shared war-stories and success stories that were re-assuringly similar.

The morning’s sessions around mobility from Twan van den Broek and then Mark Teichmann (who incidentally won the un-official prize for best shirt of the day) set the scene.  Both sessions generated lots of discussion and questions from the audience, and it was clear everyone in the room was facing the same sort of challenges around mobility within SAP’s Ecosphere.

Twan in action starting the day off: 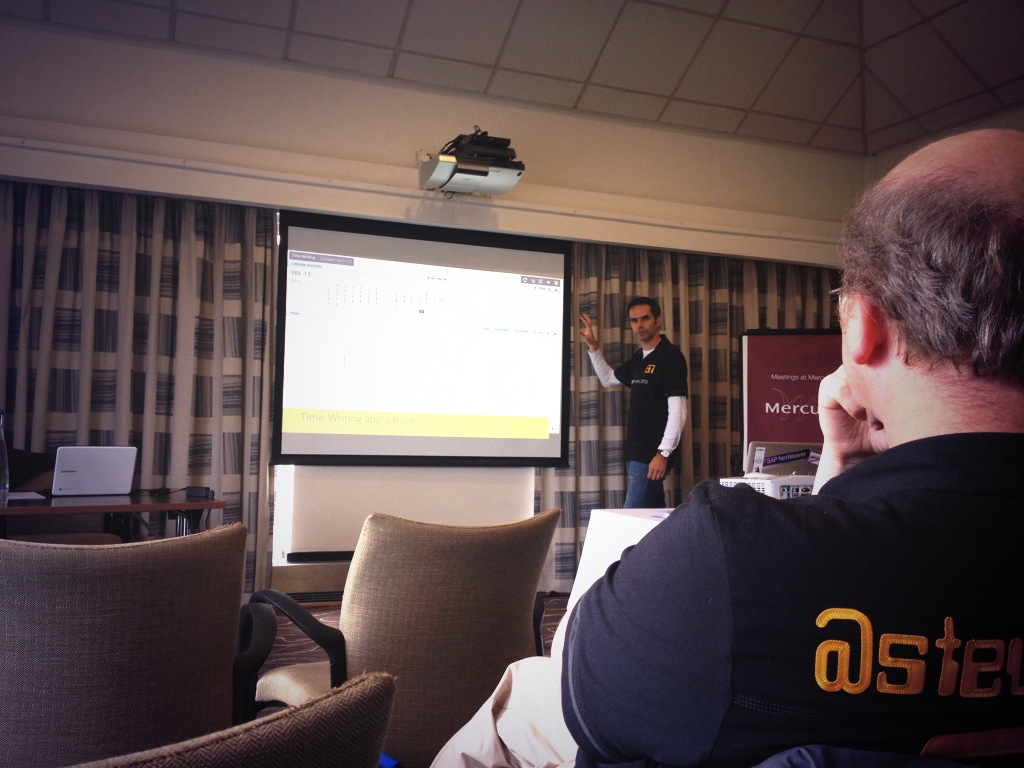 Mark getting into his mobility stride: 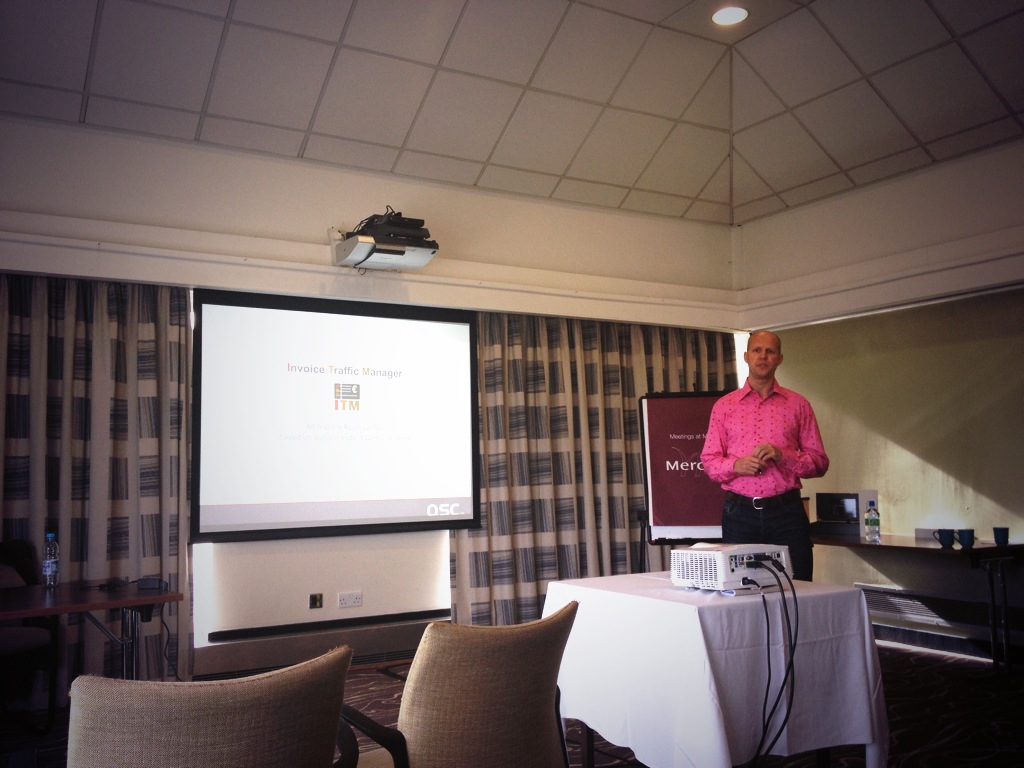 I tried my best to annoy everyone by repeatedly asking “Would your project have been lots easier if you didn’t have to cope with off-line scenarios?” at any and every opportunity.  It became clear as the day went on that this is one of, if not the biggest pain point in any mobile project.  Twan summed up our general consensus with this tweet:

Brenton O’Callaghan and James Hale furthered the discussion, focusing on the consumerisation of enterprise mobility and how design-thinking and putting the user first are key to success: 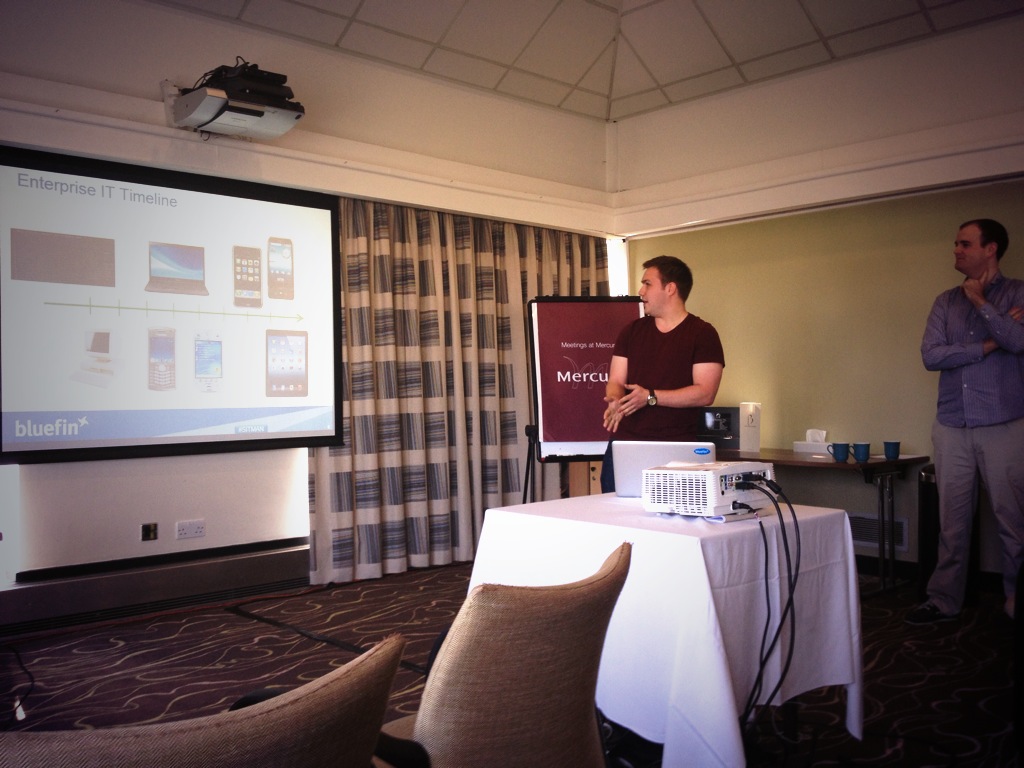 Again, lots of audience participation, a smattering of “salesman bashing” and more general agreement of the challenges and opportunities that abound in this part of the SAP world were all really positive.

After a quick lunch break and an opportunity for people to re-cap and exchange ideas from the morning’s sessions, DJ Adams launched into a very interesting talk on the chances of us seeing “Developer Nirvana”: 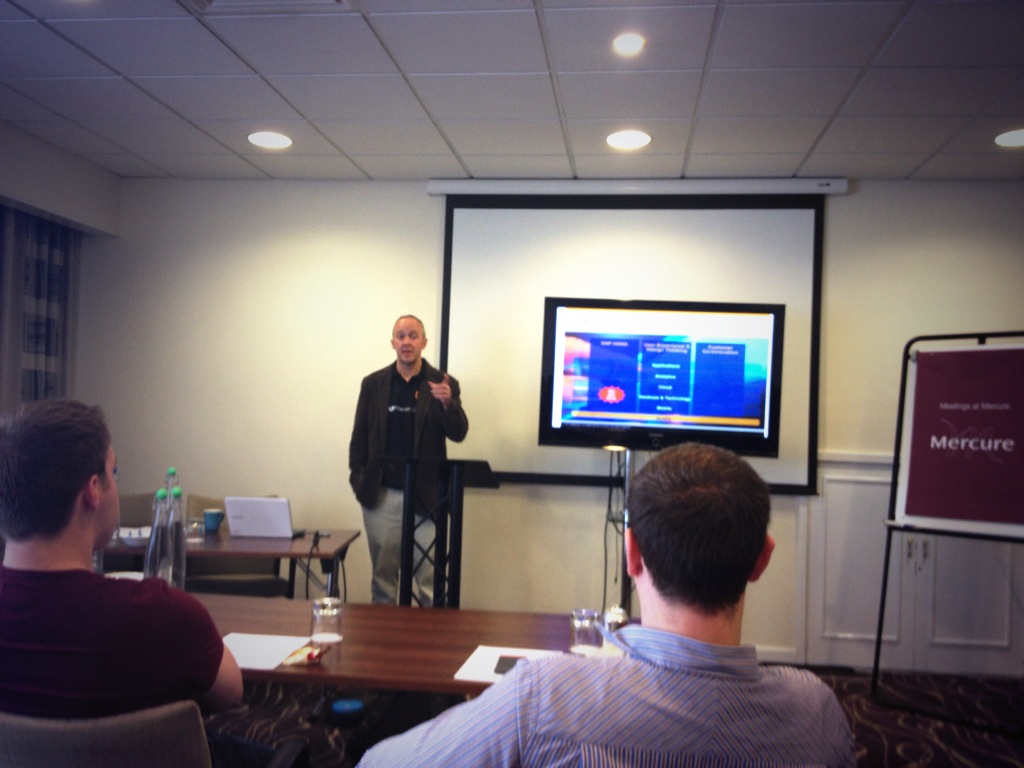 Brushing off ridicule for feeling the cold due to his age, he received lots of agreement that the current availability of HANA XS, OData and SAPUI5 were really very close to delivering Nirvana for us.  The room agreed that if SAP could make OData support offline, we’d be there.  It really feels like we are teetering on the precipice of this Nirvana and SAP’s recent focus on enabling the development community is now really starting to deliver on it’s promises.  Of course, knowing how SAP works, the rug will have been pulled out from under me whilst I’ve quickly composed this blog and no doubt everything has changed in the last 30minutes… 😉

Another area of focus in the user experience world is the launch of SAP’s Personas platform, for which Steve Rumsby braved dodgy wifi to deliver a really interesting live demo of just what you can do with the product given a bit of time and inspiration: 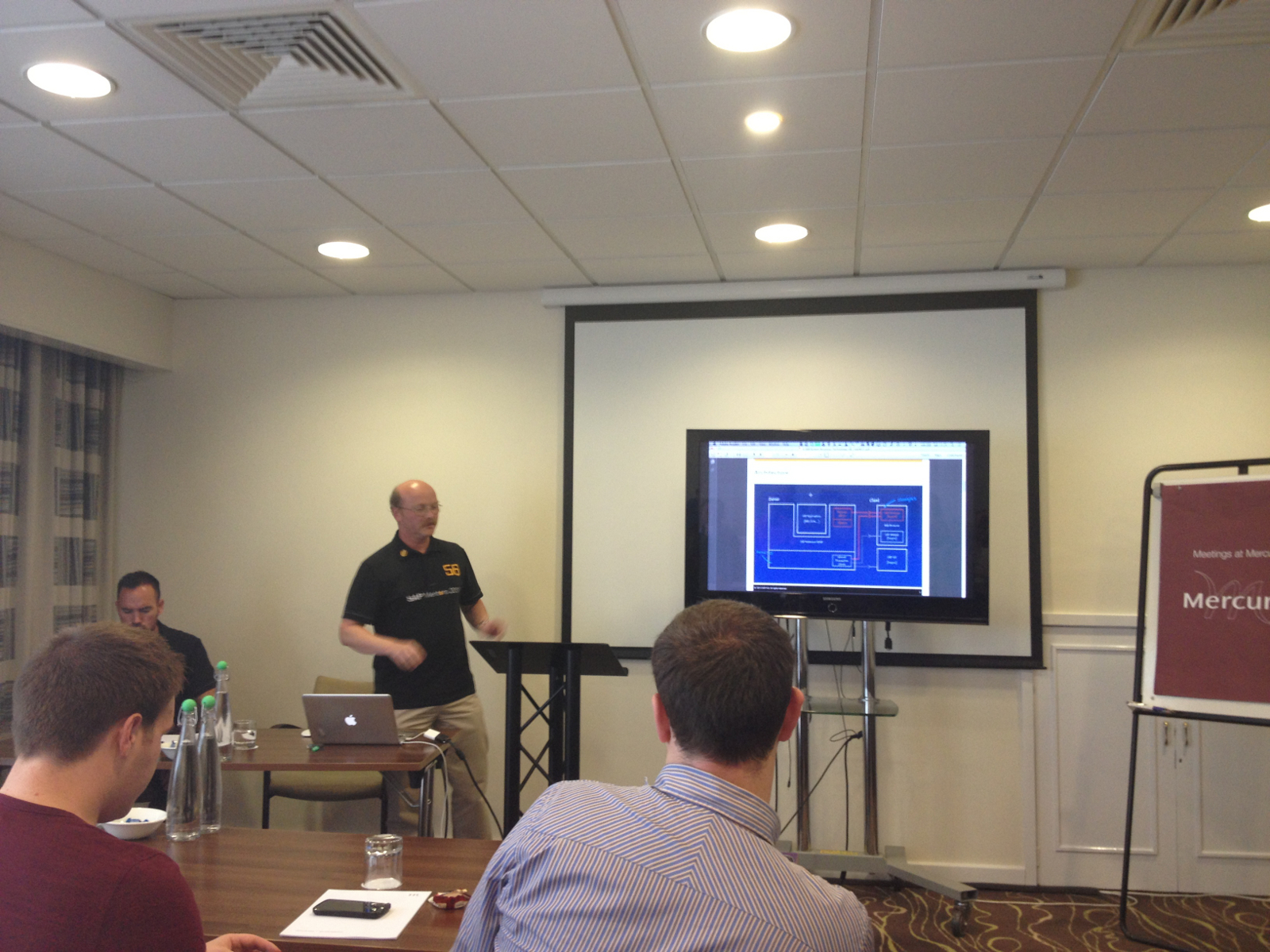 I’d attended a lunchtime presentation back in Atos just the day before where my colleague Benjamin Daw had run through an overview of this new platform so it was great to then get Steve’s view, as a customer and user, of where the strengths and weaknesses lay.

At this point, I then ran a round-table type session to discuss the cross-over of mobility and SAP BPM.  Going head-to-head with Gregor Wolf in the session stakes meant I wasn’t too optimistic of a full room but thankfully, there was a decent audience and as expected, I learned a lot from the questions and discussions my session drove out.  The key message for me, and hopefully others in the room, is that SAP needs to put more focus on enabling and integrating the BPM platform within the broader mobile and user experience strategy.  A business process is often a key part of any project and BPM is, in my opinion, the perfect platform to offer this functionality in the solution stack.  I know things are happening, maybe they just aren’t happening quick enough or maybe I’m just being typically impatient?!

Luckily for Steve Rumsby and Chris Kernaghan by the time of their session discussing the challenging relationship between a customer and SI Partner, my iPhone battery was struggling and hence I don’t have any pictures of them in action.  Shame, as the full on MMA style conclusion where the room was split into teams of SI’s and Customers was one of the highlights of the day for many.  Sadly, just as we were all about to join forces and target a common enemy (just who did kidnap and bring the poor IT Salesman*?!) the session was over and I think we’d all gained some great insight into how the commercial, cultural and personal relation across SI & customer can and should be improved for all.

Before we all headed off for pies & beers, we were treated to a final live session from Thomas Jung show-casing some of the new HANA SPS6 features.  You could really feel the enthusiasm throughout his live session and sense that in a world where SAP change there minds and focus on technology more often than I change my socks, it is clear HANA is around to stay and there is lots and lots lined up for the future of this technology.

So, what did I take away from the day?

When are we doing it again?!

* No Salesmen were harmed during the course of this session.  Honest.

That's a brillinat summary, and you must have come a close runner up with your shirt! 🙂

As I said to you before, your talk was for me very thought provoking. It generated a wonderful collegiate discussion which I thought typified the whole of the day's sessions.

Specifically, you hit the nail on the head highlighting the wasted opportunity enormous potential of combining NetWeaver BPM and REST technology to open up dialog steps to mobile apps, instead of marooned in SOA and the UWL (excuse the hyperbole for dramatic effect).

I'll take that as a complement 😉

I'm glad you found it so interesting - if I only engaged with just one person in the room, I'll call that a win and any more was a bonus!

For me, it's a no-brainer.  SAP should/could/must* begin consolidating all of its tremendously powerful technologies and application stacks so that we as developers/integrators/meddlers/architects* can really gain the advantage.  An artificial barrier between SOA and REST paradigms is of no benefit to anyone - the real benefits come when the entire technology stack supports any and all protocols, depending on what is most appropriate for any given scenario.

For the record, my demo was run over a mobile broadband connection because I couldn't get the hotel WiFi to work fast enough! Thankfully Personas doesn't seem to mind too much - traffic from server to browser is compressed so it is supposed to work OK over limited bandwidth connections. I'd not actually tried that before, and that wasn't really the time for the experiment, but it is nice to know it works.

And thanks Chris Kernaghan for the use of your MiFi. I was going to tether to my phone but the MiFi was a bit faster 🙂

Excellent summary Gareth.  I thought it was an excellent day, with a lot of learning and consensus.  I particularly liked the way that everyone was very open, whoever they worked for.

The pies followed by beer tasting was excellent and we all continued to have excellent discussions in the pub afterwards, both about SAP and non-SAP topics.  Steve Rumsby will be pleased to know that I have now downloaded an astronomy app.

Yes, that is good news indeed. Next time the ISS is passing over in the evenings I expect you to be out waving at it. I'll check the satellite photos to be sure... 🙂

Yes, next time (and there definitely will be a next time) I'm planning further in advance and getting my brownie points stored up so I can get my pass out 🙂

Great write up Gareth. I have some points to share when I get time to post! Thanks for your contribution both in session and as an active participant. I thought the whole day was very relaxed and conversational.

Great write up. We had a really good time at sitman, I enjoyed every presentation and accompanying discussion.