The team over here at NIMBL and I have been supporting multiple Change Request Management (CHARM) deployments since the Solution Manager 7.1 release.  With the release of SP05 and then SP08 – we’ve seen even more traction in the SAP community to begin leveraging Solution Manager 7.1 CHARM to control both SAP and non-SAP changes in the landscape.  Often times we still find environments where Incidents and Problems are managed outside of the SAP landscape – but the SAP customer wants the best-in-breed workflow and control of CHARM.  Typically the decision is to move forward with CHARM and then we’ll add an external reference field for Incident/Problem numbers.

Slam Dunk – Right?  No need for custom table and no need to develop a custom report for it to work!  Beautiful.  Here’s how it works – the system we used below for screenshots was running Solution Manager 7.1 SP08

You’ve added the field to the CRM UI – nice work!  Test by inputting data and saving your RFC.

We’ve done it!  We added an External Reference field to Change Request Management in Solution Manager 7.1 SP08 without any coding or development.  And we’re able to report on the field via standard SAP reporting.  We have not had time to validate if the above Config is also used in ITSM Analytics.  Will post an update once we’ve had time to confirm. 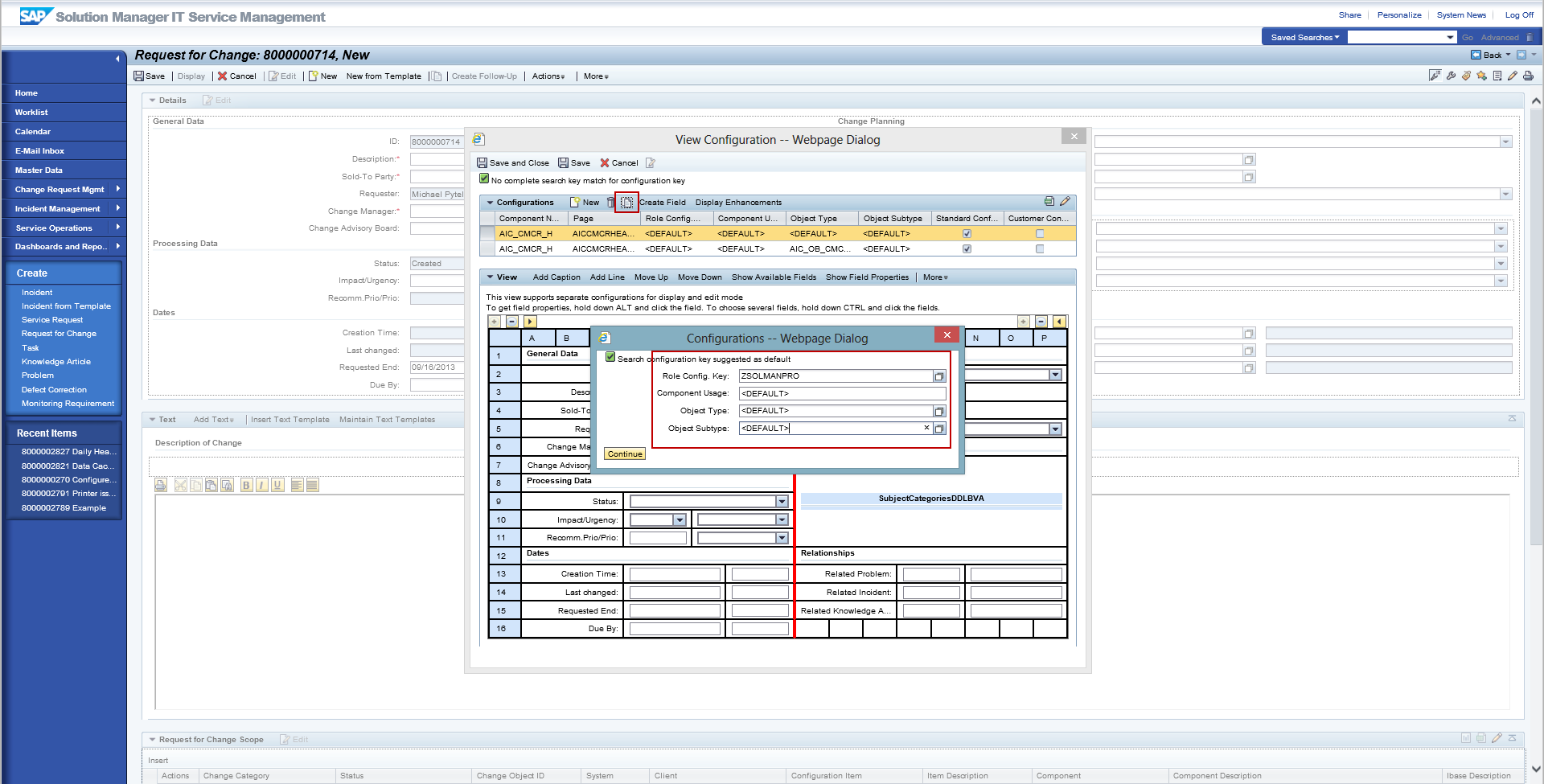 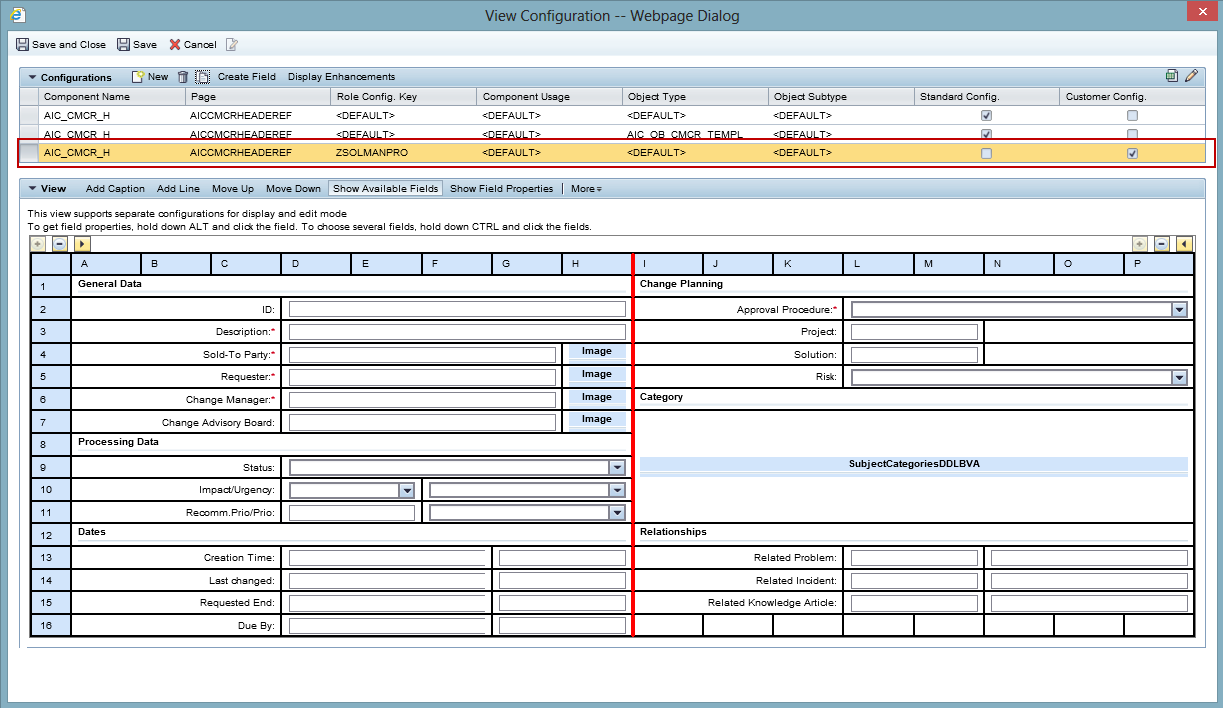 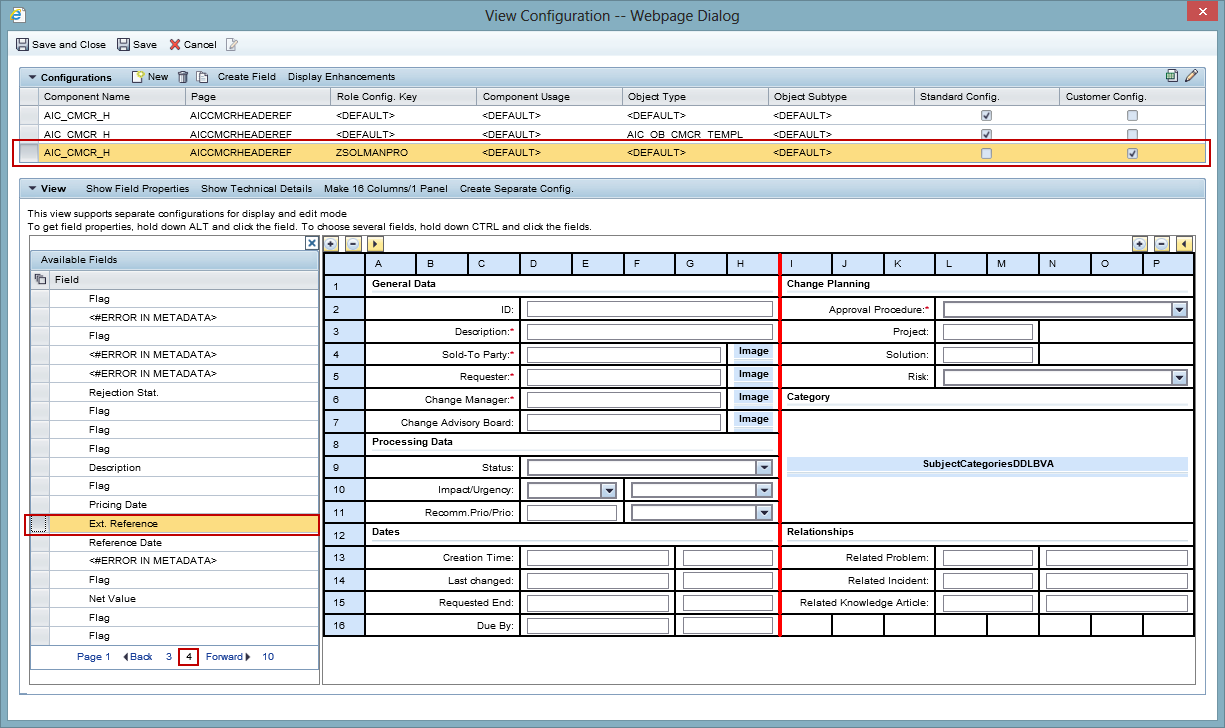 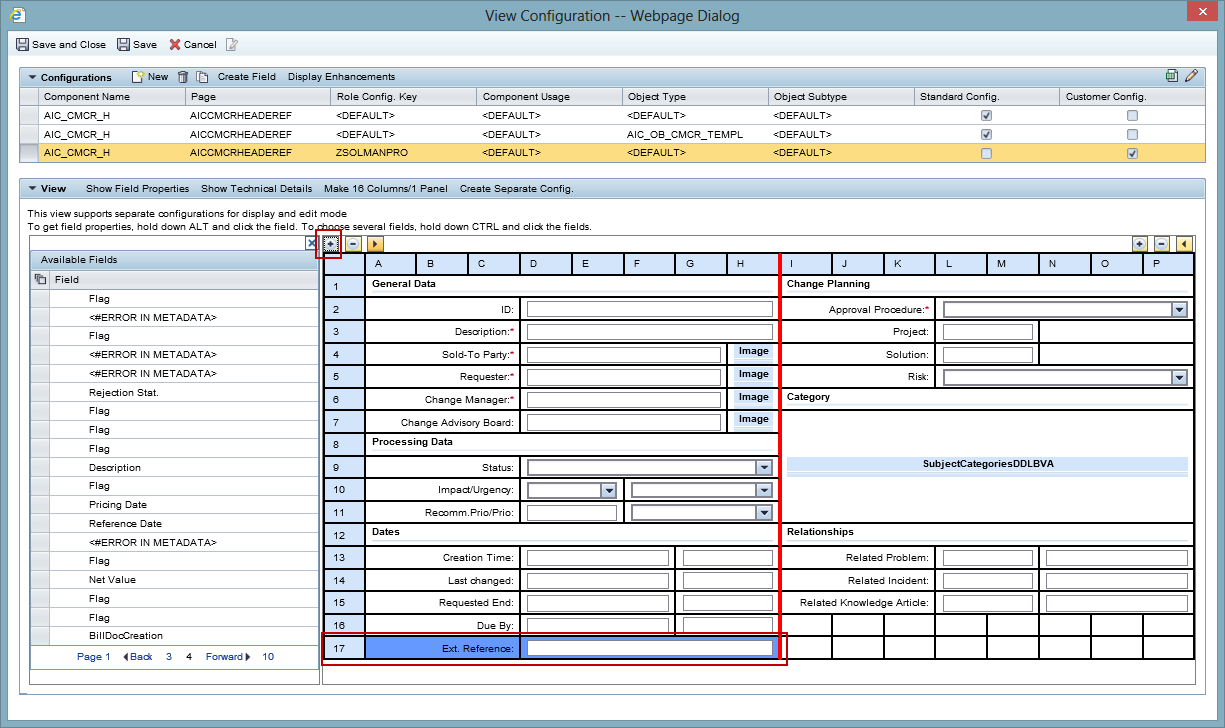 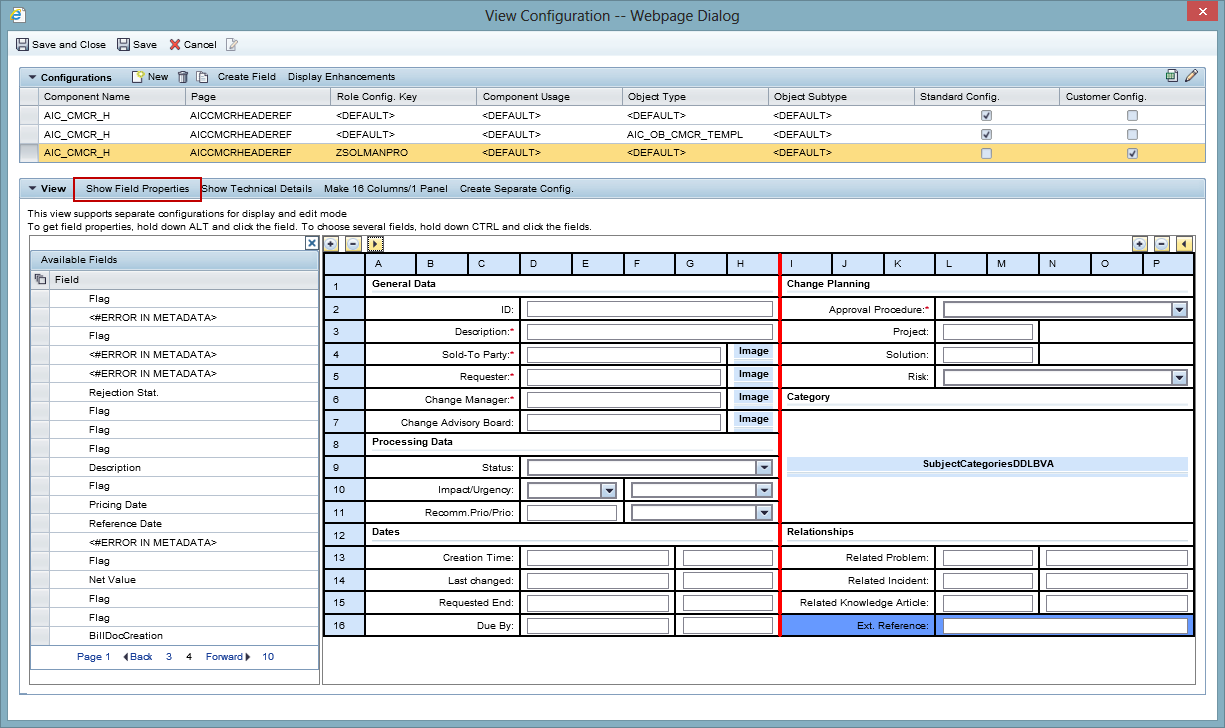 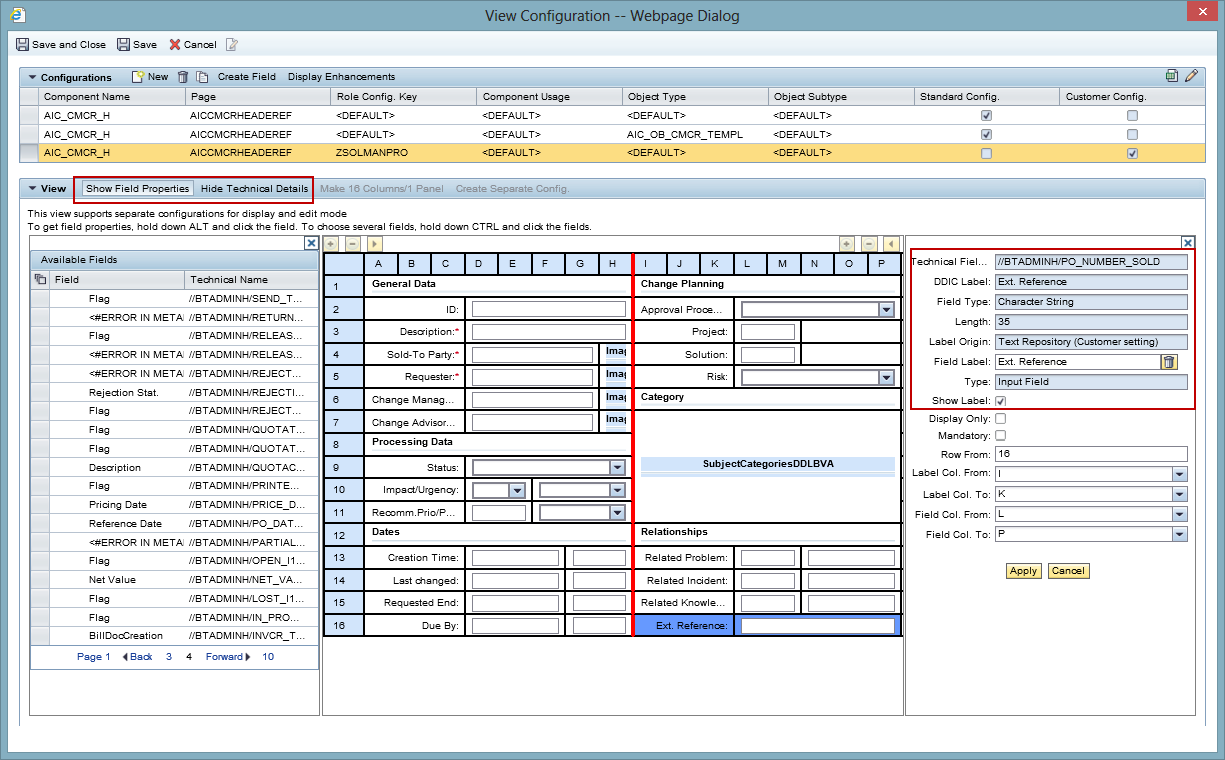 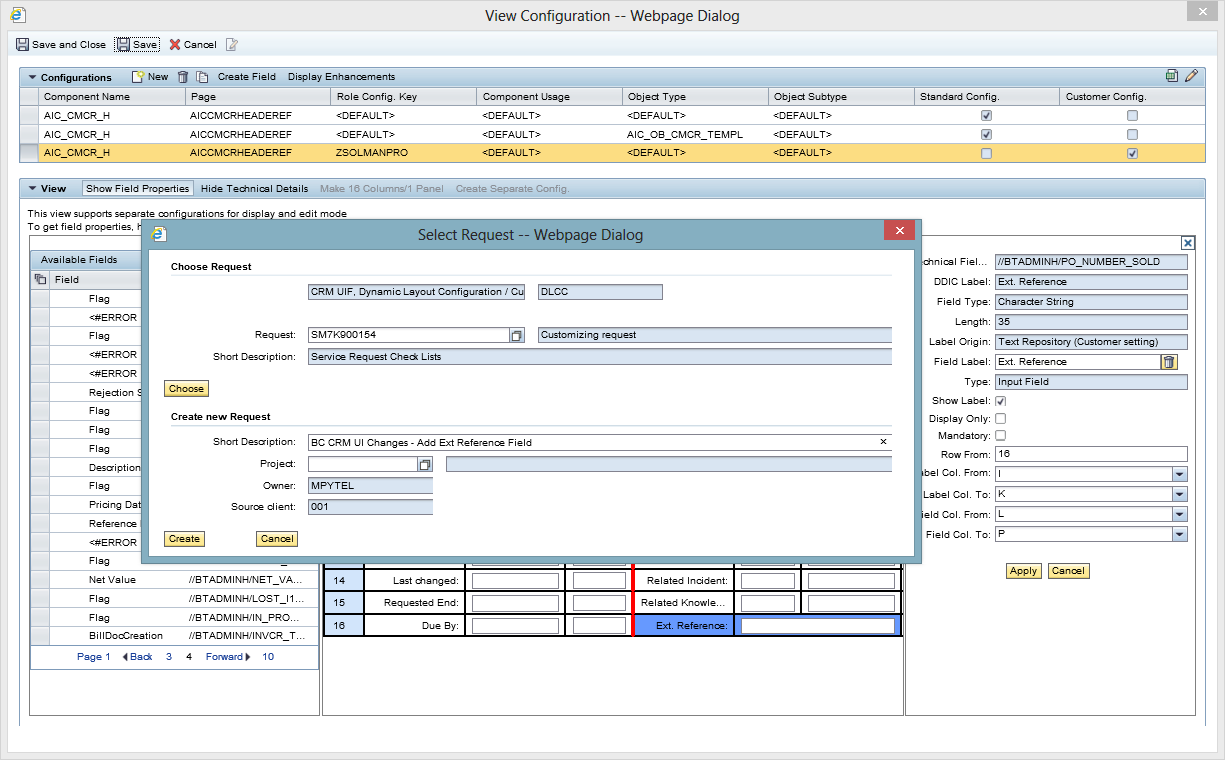 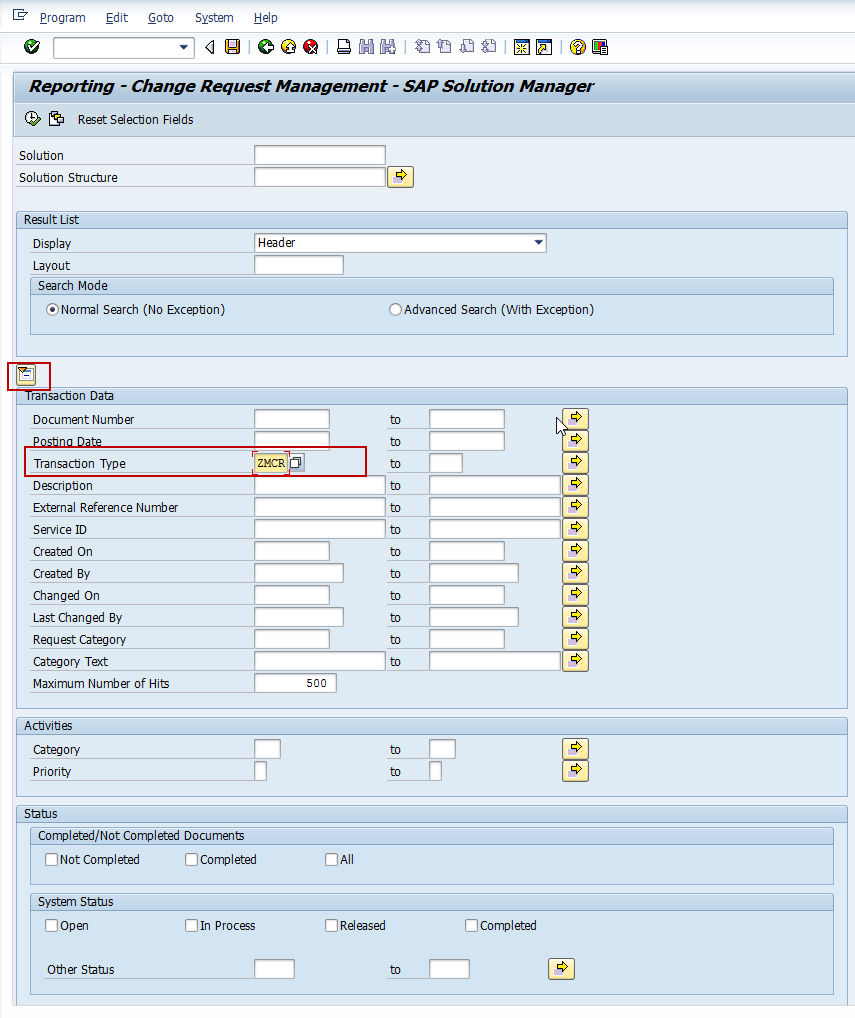 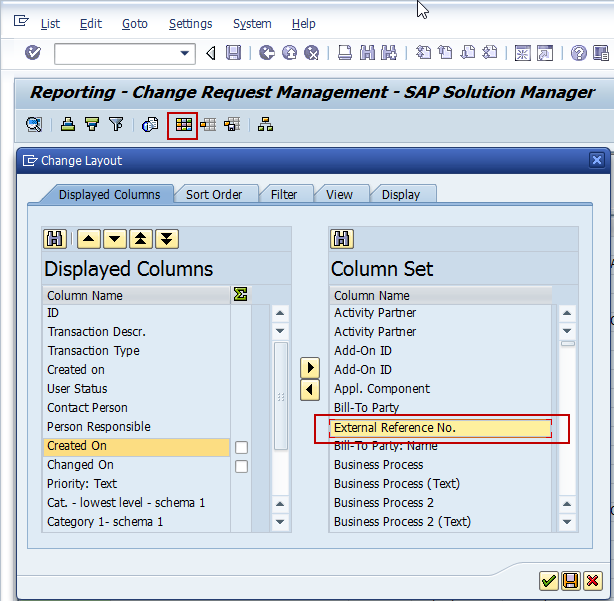 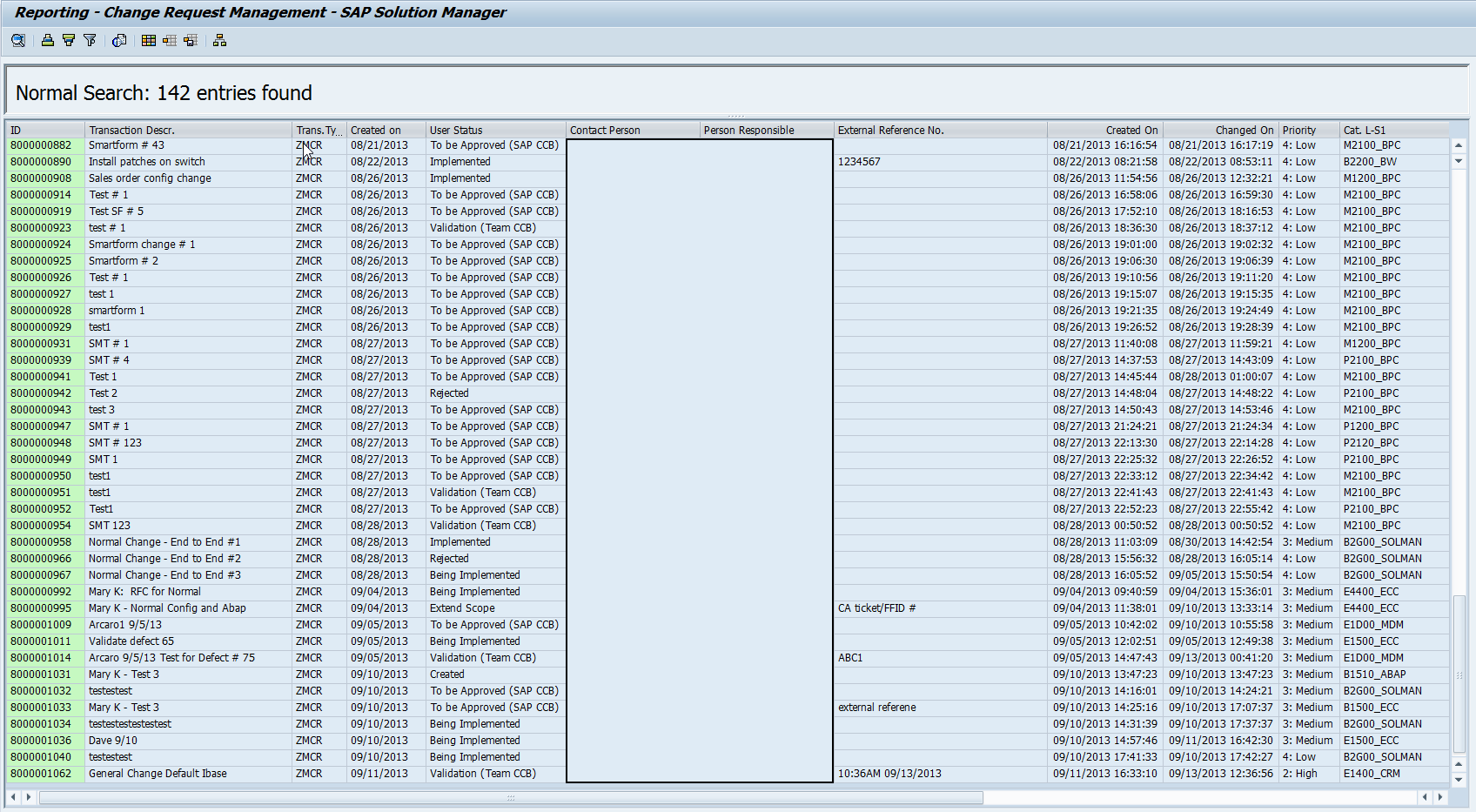 I totally agree with you when you say that "SAP customer wants the best-in-breed workflow and control of CHARM".  Since 7.1 was released, ChaRM has been more well accepted by SAP customers and it's very hard to find another tool so efficient to control changes in SAP Solutions as this one. Of course there are many other ITIL tools, but none of them has a Change Control so integrated to SAP systems as ChaRM. As many customers need to control changes in SAP and non-SAP, with the improvements of 7.1 they realised that they could control changes in their whole landscape with one single tool that is already included in their license. In my 8 years implementing ChaRM I have never seen so many customers interested on it as in the last 2 years (in the first year after the release we basically only had ramp-up customers and few early adopters running SP01 to 03, at least this is my perception). SP05 last year brought great improvements and SP09-10 (FP2) that will be released this October will be even better.

- In order to see the 'Show Configurable Areas' button, besides the correct authorization you also need to flag the "Enable Configuration mode" in the Personalization area of the web client. (Click the "Personalize" button in the upper right corner of your CRM UI and choose Personalize Settings. Well, this is included in the Guide that the reader is supposed to have followed, but just in case...

- the field External Reference Number is not available yet in the Search and Result view of the Web Client, only in the Details as shown in the blog. It must be included via enhancement, not so simple as it is to include in the ABAP reporting for ChaRM as the Web Client UI component must be enhanced.

Note: CRM_UI_PROFILE with * should only be used temporarily if you want to see the whole list of existing Business Roles. It's intended for consultants to quickly test out Business Roles on Dev or Quality. End users should not have this parameter in their user profiles.

By the way, nice to see you blogging here 🙂

The strange thing is that the field is avialable for Search in the Worklist. Very strange it is not available in the normal search.

since SP10 this field is included in the Search. We don't need to enhance the Search View anymore.

Very nice!  So I added the field to my change req. and to the change document.  Sadly, data added to the C/R was not copied over to the C/D. True, it's obviously possible to get from one to the other, but it would be nice to copy the new field over.  Maybe you've solved this.....

You can customize that via Copy Control Rules (>Capabilities>Change Control Management>Standard Configuration>Change Request Management Framework>Make Settings for Change Transaction Types). There is a checkbox that defines if the Ext Reference should be copied or not.

This was a very nice write up, and highly relevant to most companies as an external non-SAP Change Control tool is already in use.

By the way, I attended one of your Solman workshops at Admin2014 in Orlando.  You guys did a great job.

How to add the external reference filed in SM_CRM search filed, i am using SP08 and SP10 system. SP10 it will show in default.