These are my notes based on what I heard at the time.

His keynote takeaways from yesterday, with the innovations making in BI suite, he is asking his team how fast can get on BI4.1:

Steve talked about the future of data in a connected world

He said he questioned the super hero theme but now likes it and encourages everyone to see the trailer.

He said during Hurricane Sandy, the  phones were down but people could tweet

He talked about the “Context of massive tweets”.

He said “Analytics is here to stay, survived test of time”.  He said “BI4.1 is just the beginning”.

Do we remember when we first went to the website?  When we went to Amazon?

We connected to Internet but it didn’t connect to us

Every person has a mobile phone, every 30 seconds is sending a ping – telecom knows where you are, who you call, and the massive amount of data

What are you doing – we live in an interconnected world, and it is getting only more connected

“We talk to things” by typing, and searching

Steve said “things will talk to other things”.  An example is his house – lower shades –could the air conditioner talk to the shades?

Cloud computing – what does it mean?  Is it HANA Enterprise Cloud? Facebook?

Data is having its “cloud moment” says Steve Lucas.  It covers a lot of ground

“We all have big data” – social, mobile, unstructured on the left

Need material components to acquire, analyze and act on it.  This is important for big data

HANA is underneath with a Real Time Data Platform Figure 4 covers “delivering the tools – will show more”.  Tools to help you analyze and track the information

During the keynote we received a tour of the Big Data bus at sap.com/BigData

Inside this bus there is a smart vending test drive, telemetric data from bus, a Hadoop cluster & HANA system on the bus, with mobile technology 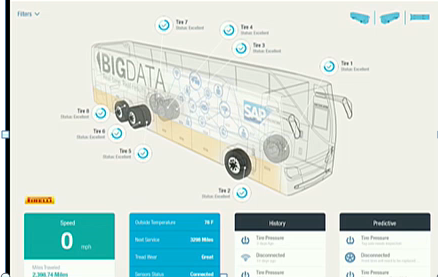 Figures 5 and 6 show the bus has sensors, to interpret tire wear, and read the data bus.  Steve said they will “Bring the show to you”

Steve said with his new leadership team, they have a new vision, roadmap, to continue to build quality to product.  They want to engage business users with products have a reason to exist and compelling- real time.  He said that “Batch is a dead concept”. 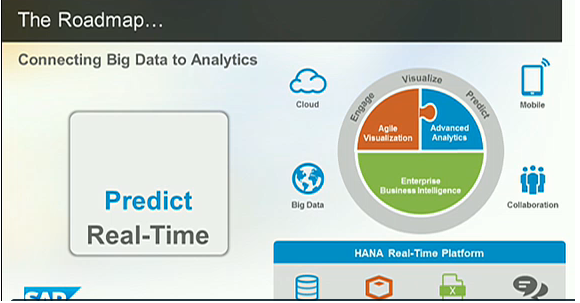 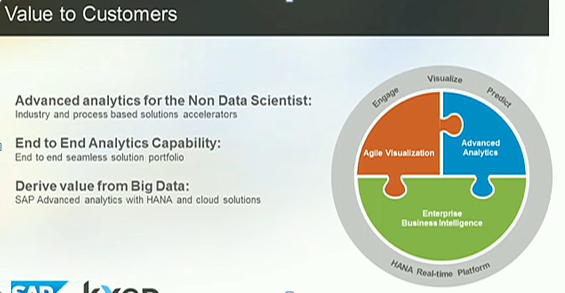 How KXEN is for predictive, ease of use, speed, address business user, and he said that SAP core apps would benefit from predictive.

KXEN was used in the Obama campaign

Summary with Preview of Tomorrow’s Announcement

Steve said it is not about the product, it is about being committed to success

BI4.1 is the step in the right direction, he stated.

Steve said “Innovation doesn’t happen with just one company”.  With the HANA start-up program, 35 startups already have solutions in production, in 22 industries, 9 line of business

He said “Volume, velocity, variety can be tough to deal with” with a Big Data challenge

It is not about data scientists, it is about business analysts

He announced the Big Data Challenge – see http://www.sapbigdata.com/challenge/ – Enter and submit use cases for how you have applied big data