In this challenge I will try to show you a analysis of high-tech exports from several countries, using SAP Predictive analyis. High-technology exports are products with high R&D intensity, such as in aerospace, computers, pharmaceuticals, scientific instruments, and electrical machinery. Data are in current U.S. dollars.

I collected the data from This link from 1988-2011. First of all we need to download the data, then save the data in excel (.xlx).

format the data is presented as the table below, the Country Code will very helpful to facilitate in determining the position of a country. After that I made ​​a meansure by year and country.

Below is a visualization of the formed:

Table: in the form of tables will provide more detailed information, the following is the number of 20 countries with the highest export of High-Technology in 2011 in U.S. dollar

Pie Chart: in the visualization of Pie chart, Look China export value in 2011 is comparable to the 3 biggest exporting country below china. Very fantastic! 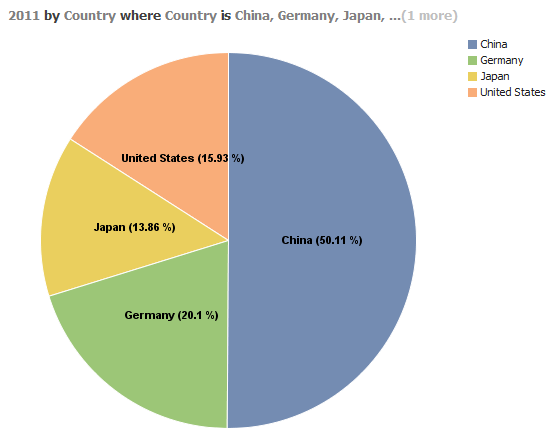 China also controls almost one quarter trading of High-Technology in the world. Next below is the view in map, here shows which countries become exporters High-Technology in 2011 and we compare with 10 years ago.

Seen 10 years before America was the one who controlled, with japan and europe trade of High-Technology.

Next we will see the growth of the country’s largest exporter of High-Technology in 2011 from 1991.

in the form of a 3D coloum chart, we can see countries that are trying to become the largest exporter, is seen starting in 2005 singapore starting compensate for export japan. then seen a steady growth in Germany. American growth fell in 2008, then back again to China shows his superior ability in increasing foreign exchange through export.

The line chart below can show more clearly the growth of export High-Technology:

The next is a comparison of the growth 5 country, measured by the distance of 10 years. China look shows a very high jump from 1991 to 2011 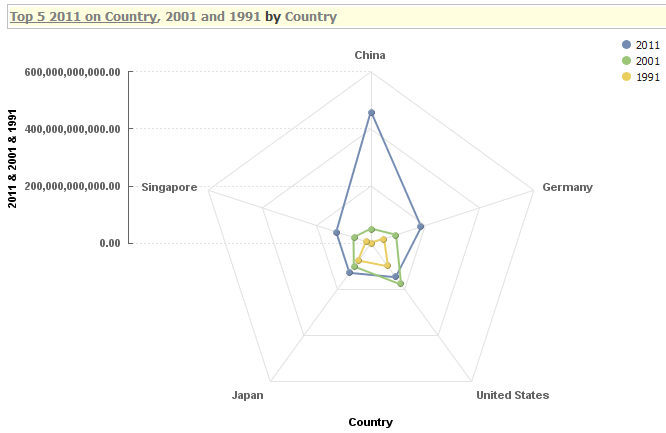 To clarify we can take a look into how much the increase in exports of High-technology, Compared with 10 countries under china’s based on largest export in 2011.

In SAP Predictive Analysis, there are still some visualization models that can be used, of course, according to the analytical model that wants to do. This is very helpful in getting information fast and fun.

Some other visualization with SAP Predictive Analysis, I try to look as 25 states with the largest export in 2011.

Final word, i closed my blog by following analysis with Area chart, which shows the state with the highest export value since the year 1988 to 2011.

and the state sequence is:

I hope this blog gives all new inspiration in presenting raw data more fun and colorful.