I made a simple analysis using SAP Lumira to help everyone know about the potential of various states in India for producing energy from renewable resources.

Renewable energy is energy that comes from resources which are continually replenished such as sunlight, wind, rain, tides, waves and geothermal heat. The share of renewables in electricity generation is around 19%, with 16% of electricity coming from hydroelectricity and 3% from new renewable. New renewables include small hydro, modern biomass, wind, solar, geothermal, and biofuels.

India is blessed with an abundance of sunlight, water and biomass. Vigorous efforts during the past two decades are now bearing fruit as people in all walks of life are more aware of the benefits of renewable energy, especially decentralized energy where required in villages and in urban or semi-urban centers. India has the world’s largest program for renewable energy.

I got the apt dataset as shown below for analysing state wise potential of various renewable energy resources in India from http://data.gov.in/ 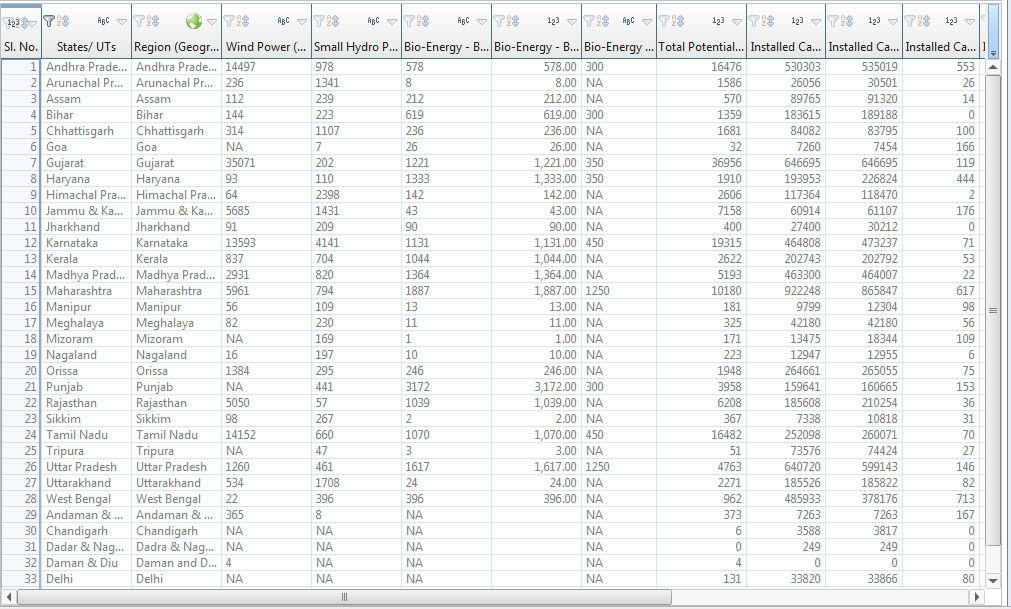 My analysis would positively help to answer the following questions:

SAP Lumira helped me to find the answers to the above questions with its apt visual display. 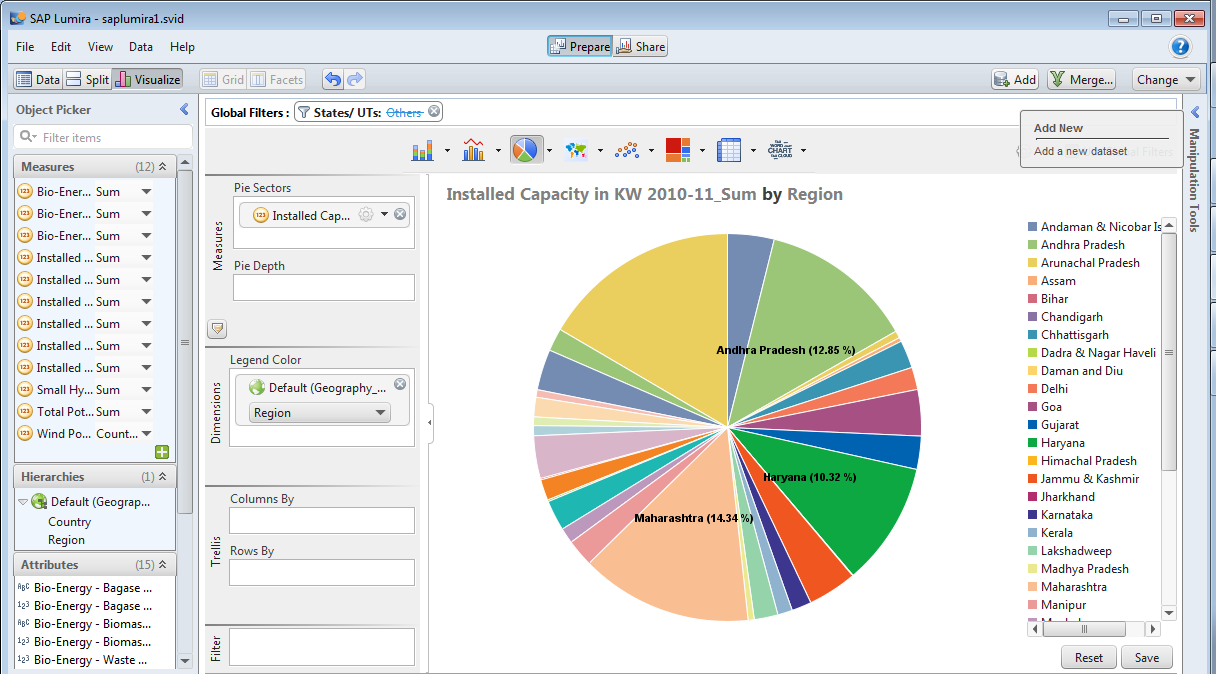 The above pie chart shows the state wise potential of various states in India distinguished by different colors. 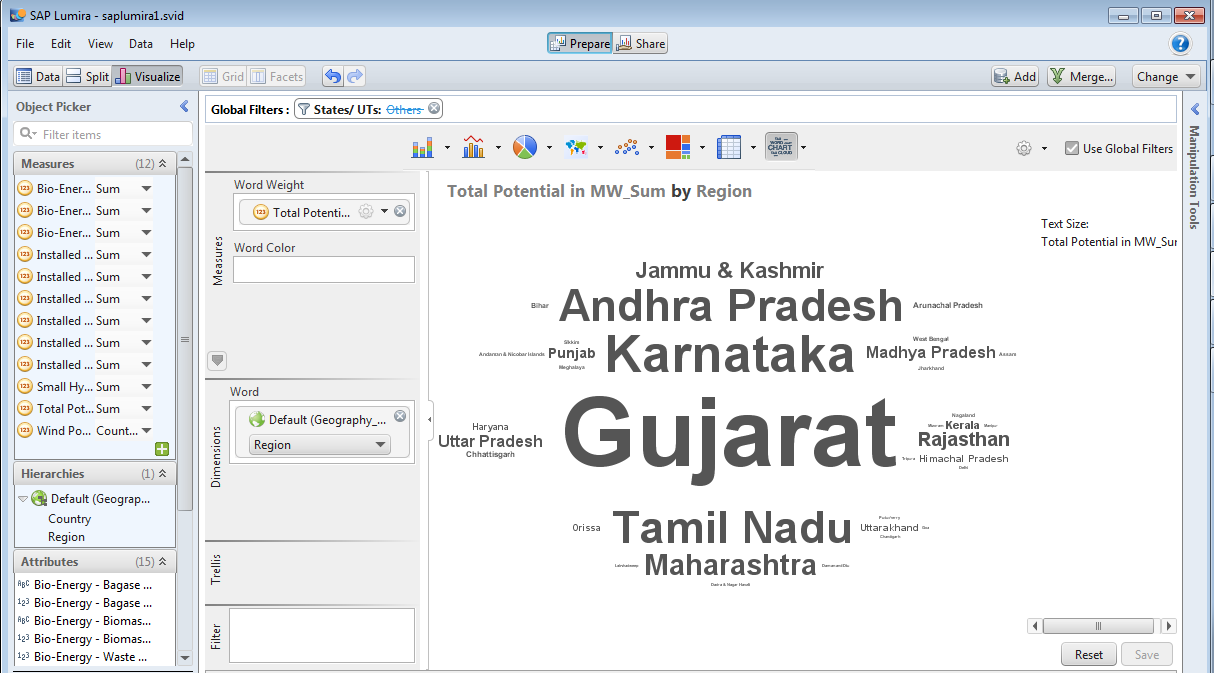 Amongst all the states in India , Gujarat has the highest potential for producing energy from renewable resources which is clearly evident from the above tag cloud of SAP Lumira.

This can also be visualized using geographic representation of India . 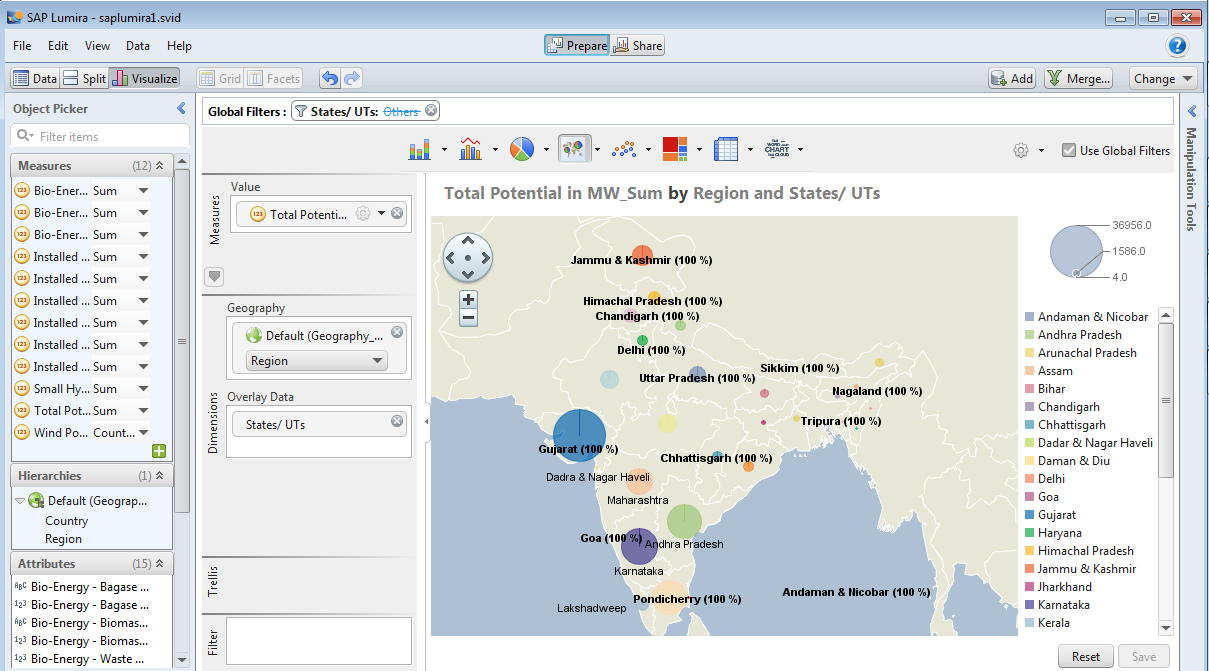 2. Comparison between states in India with respect to potential of various renewable energy resources

Considering small hydro power sources , we get to know that Karnataka has highest production of production of energy followed by Himachal Pradesh and Uttarakhand using Tree Map of SAP Lumira.

Hydropower or water power is power derived from the energy of falling water and running water. Next we will take energy produced from bagasse into account. Bagasse is the fibrous matter that remains after sugarcane or sorghum stalks are crushed to extract their juice.

Using Donut Pie Chart of SAP Lumira,  we can see that Maharashtra and Uttar Pradesh have contributed maximum ie 25% each followed by Karnataka and Tamil Nadu ie 9% each. 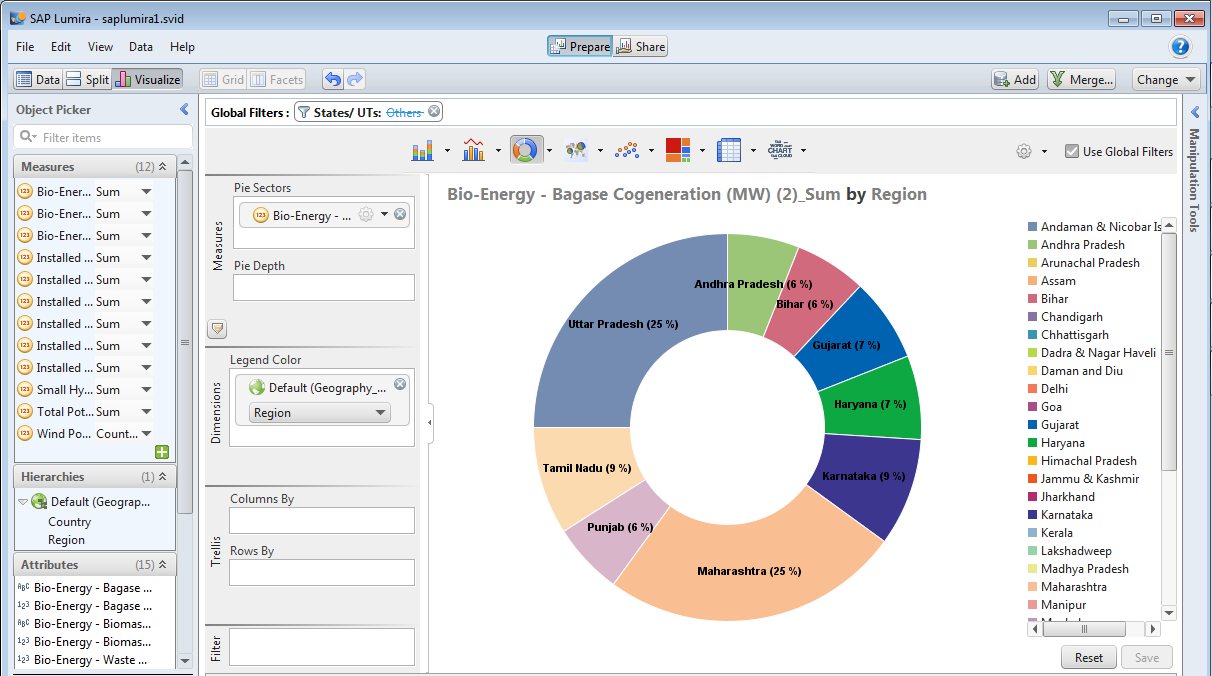 Next ,  one of the largest contributors to producing energy , is Biomass. Biomass is biological material derived from living, or recently living organisms. It most often refers to plants or plant-derived materials.

In this ,  Punjab leads from front with largest production of energy using biomass followed by Maharashtra and Madhya Pradesh. 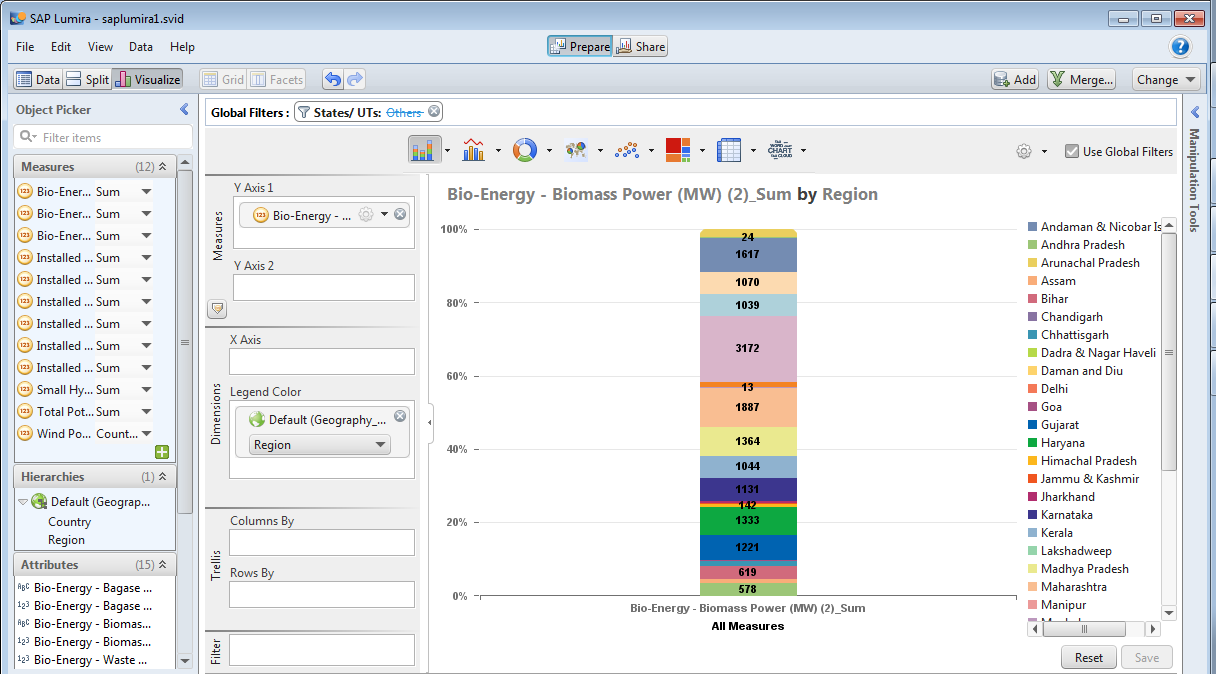 Now we will consider ,  waste as a source of energy production . Waste production will never stop till there is existence of mankind  .So transforming this into energy is a wonderful concept 🙂 .

In this again , Maharashtra leads followed by Uttar Pradesh . Energy generation from waste should be encouraged worldwide which would not only give us energy for usage but would also take care of waste produce.

Recently, as reported in a daily newspaper , one country fall short of waste for producing energy and had to import waste from neighboring country. 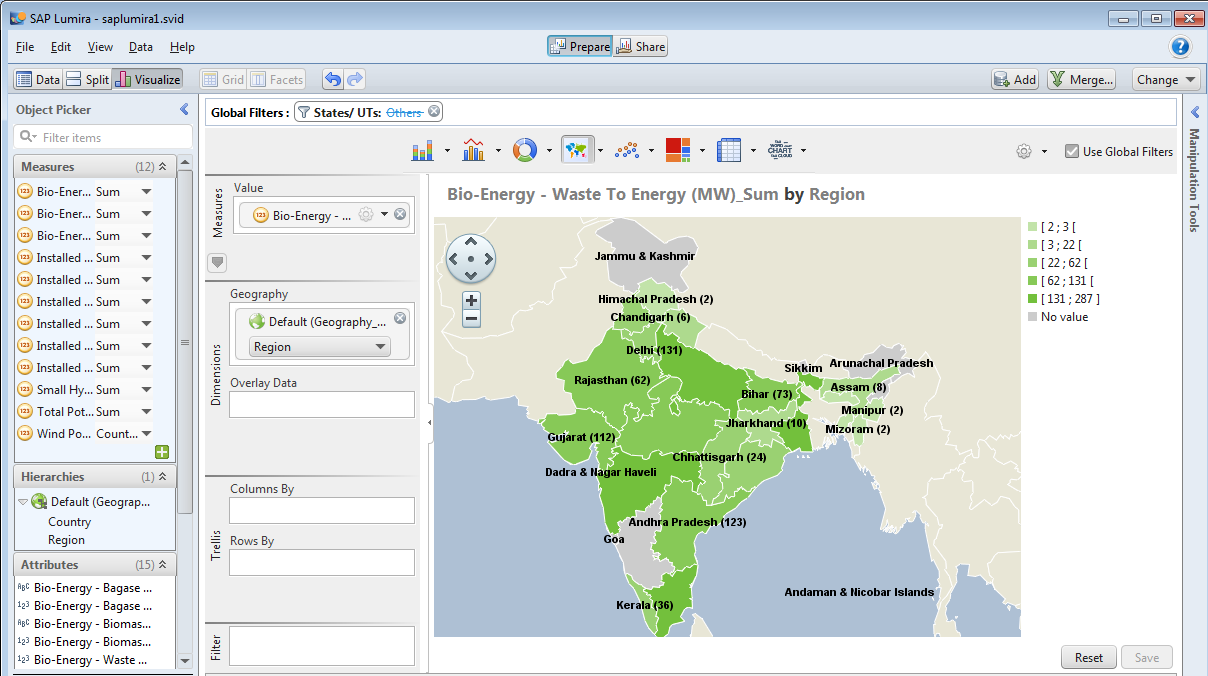 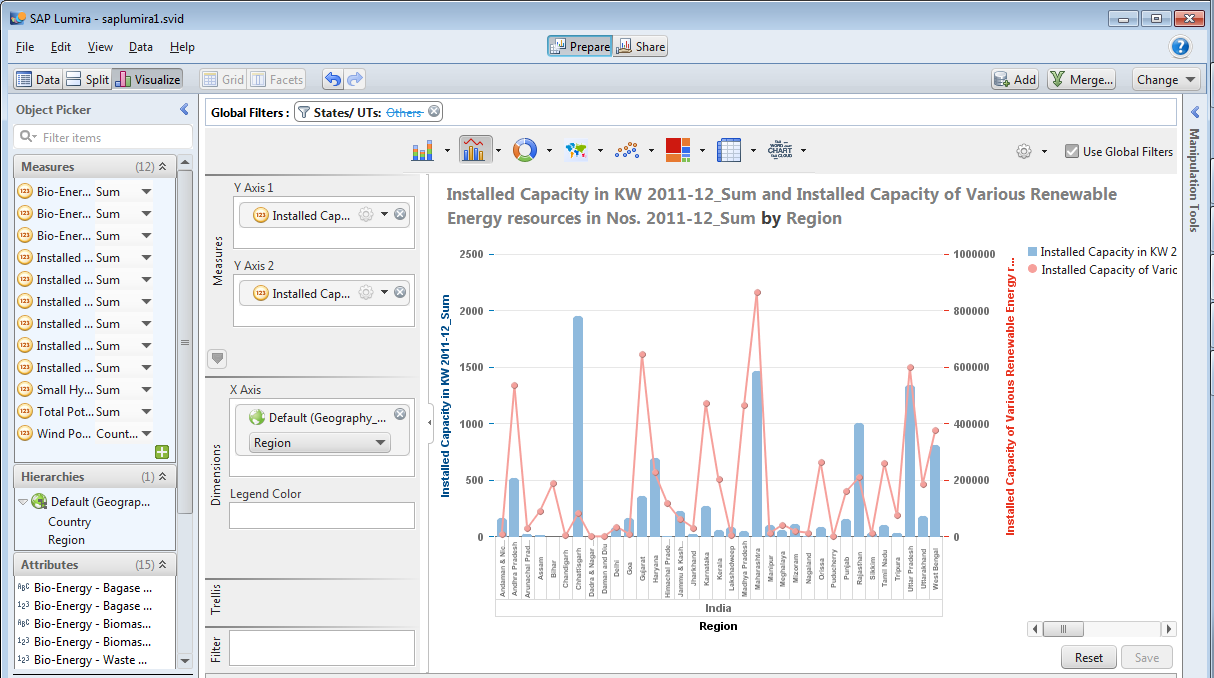 From the above charts it is evident that very few states have used the installed systems to its optimum level. 5. Comparison between the number of installed systems for producing energy from renewable  resources in 2010-11 and 2011-12 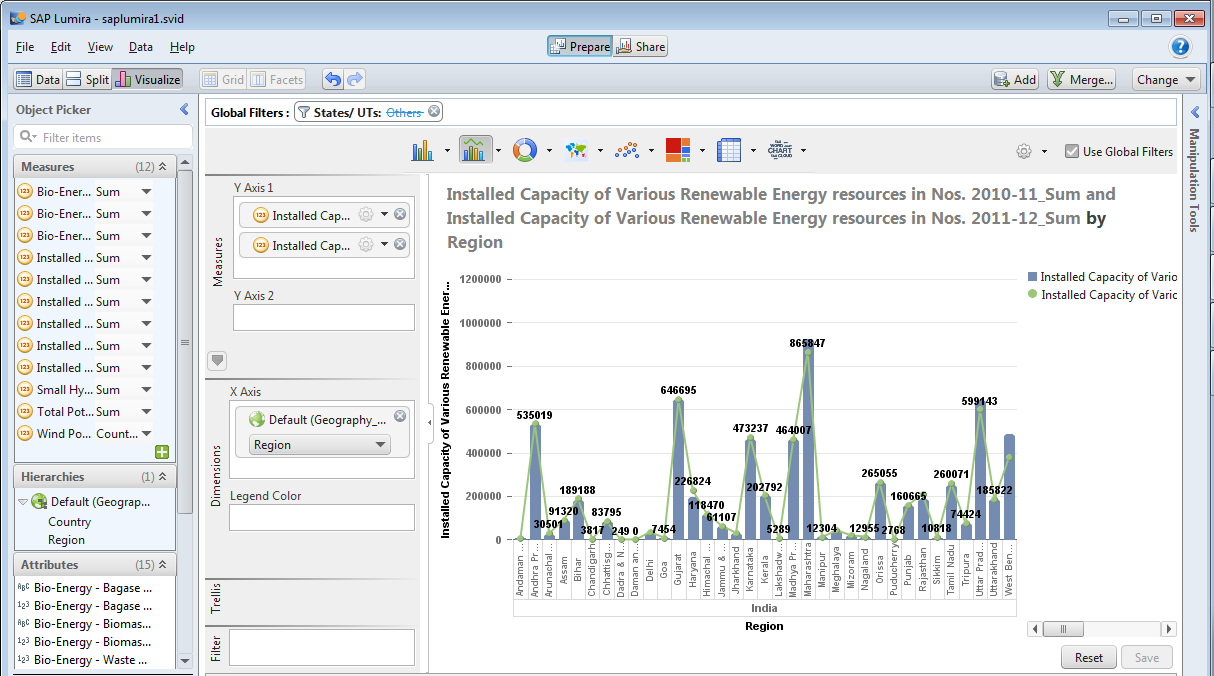 The technology of renewable energy production being a boon to the environment should be used to its optimum level. This can save the rapidly depleting sources of energy and also the environment 🙂 .

Thanks to SAP Lumira , completing my analysis became a lot more easier. I hope this analysis using SAP Lumira would help the government and people of India in focusing on this aspect of energy production from renewable resources 🙂 .

interesting analysis. Got to know about different process for energy production from renewable resources.

Its very informatics and knowledgeable as well as very interesting. very strong analysis and energy renewable resources. I have just send your blog to my all friends.

Thanks for sharing and keep it up.

Thanks Arshiyan for the appreciation and encouragement!!! 🙂

Liked the way you have done the analysis!!

I hope your work helps everyone to keep a check on energy production from Renewable sources.

Good Visualisation Poonam, Lumira is indeed a welcome platform for us to proove and put forth our arguments and ideas!

Thank you Kumar for the appreciation!! 🙂

Your analysis is Rock!!! better then SSAS 🙂

Thanks a lot Mehboob!! 🙂