It’s All About the Numbers

Hello sports fans!  In my previous blogs I documented my March Madness picks using SAP Lumira, and came within one Michigan win from winning my bracket pool.  Having played Bracketology numerous times in the past, I tempered basketball knowledge with statistics and felt reasonably okay with my results.

So how will I fare playing fantasy football?  This is the first time playing so I’m going to lean even more on fantasy statistics.

The fun thing I learned about fantasy football involves drafting strategies based on the type of league one participates in.  Take a look at this flow chart from The Fantasy Fix for example:

I’ll be playing in a 2 QB league with 8 teams in total, playing head-to-head weekly matchups.  Total points at the end of the year won’t matter, I just need to beat my opponent on a weekly basis.

Most fantasy experts will argue that quality QBs are readily available mid to late draft, placing emphasis on RBs instead, even with a 2 QB strategy.  There are always exceptions to the rule, particularly when rating players by tier and factoring position scarcity.  We’ll get to that in a moment.

Not knowing exactly where to start, I consulted cubicle neighbours and fantasy football experts Ryan Glanville and Ryan Oliver on drafting strategies.  Their tips and tricks:

– Group players by tiers, based on their fantasy point averages and totals

– Draft based on scarcity (if 4 of 5 QBs in the same tier are drafted before you and you own the next pick, draft that last QB)

But how do I differentiate two similar fantasy players?  Strength of schedule. 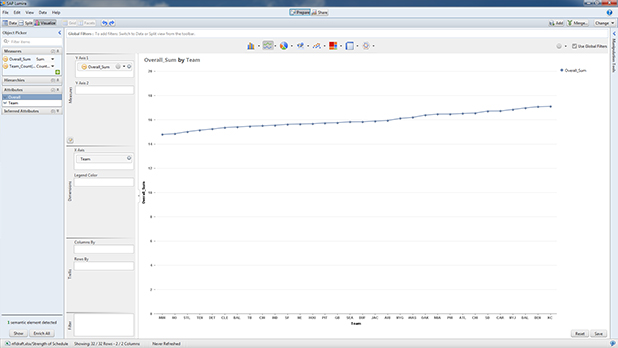 This is based on the number of points a team scored against each of its opponents in 2012, then averaged over the team’s 16 game schedule .  The lower the points, the tougher the team’s opponents.  So if I had to choose between a similar fantasy player from Minnesota versus a player from Kansas City, statistics will pick the player with the easier schedule.

Based on the points per game and strength of schedule, it’s clear that Aaron Rodgers and Drew Brees are the consensus 1-2 top QB picks.  Strong cases can be made for Peyton Manning and Tom Brady, but I have concerns over Denver’s strength of schedule and Brady’s receiver corps overhaul.  But the top QB picks are pretty clear, which means if the draft is trending QBs in the late first round I need a top-6 QB pick.

Colin Kapernick to Russell Wilson are considered the tier 2 quarterbacks based on Lumira data.  If I want a consistent weekly performance I need QBs from the first 2 tiers.

This is where it gets really interesting.  Adrian Peterson is the clear cut top RB, followed by Doug Martin and Arian Foster.  Foster however, has injury concerns and is expected to drop in the draft. 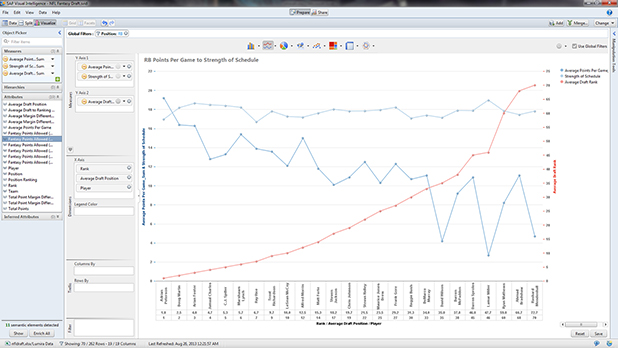 Marshawn Lynch and Alfred Morris are the real steals here.  Their performance drop off from Doug Martin and Arian Foster are minimal and I can probably grab them late second round to early third round.  I’m looking to take at least one of these RBs, if not both.

Top tier receivers start at Calvin Johnson to Brandon Marshall.  There are however 8 very similar receivers at the second tier level.  Looking at strength of schedule, Wes Welker is a steal mid-draft.  I think he will benefit significantly playing with Peyton Manning, so if I can grab him in the 7th or 8th round I will. 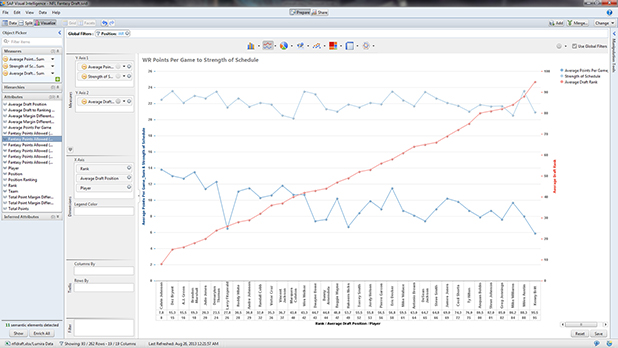 It’s Jimmy Graham, Gronk, or bust.  Jason Witten and Tony Gonzalez are old, and Vernon Davis had a pretty silent 2012.  I’d be shocked if anyone found a steal here. 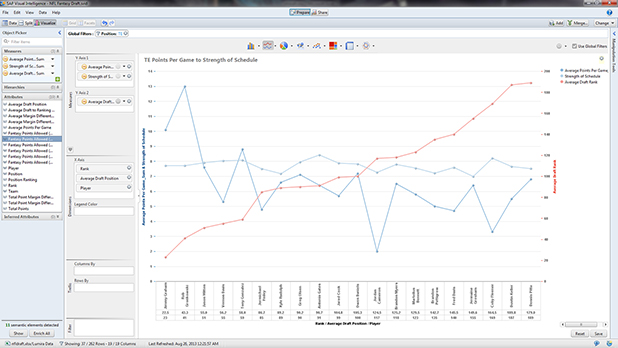 Again not much to say here.  It’s fairly even after the top 3 picks and my pickwill fall in the top 8.  On a bye week I may pick up Josh Brown off waiver to cover. 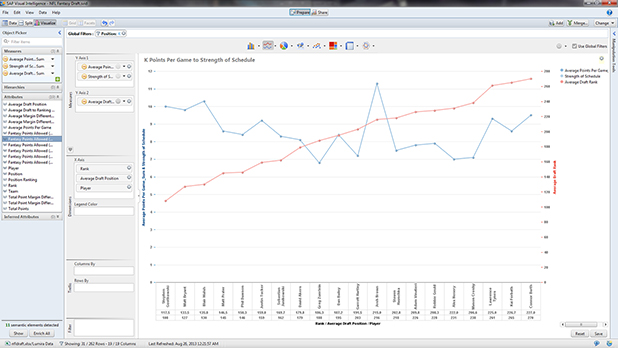 So how did I fare in my first fantasy football draft?  Not bad for a first timer, I think!  I created an average player draft ranking using 5 mock drafts from FantasyPros and compared my own results to it.  Dark blue represents the pick I used to draft, and light blue represents average draft ranking. 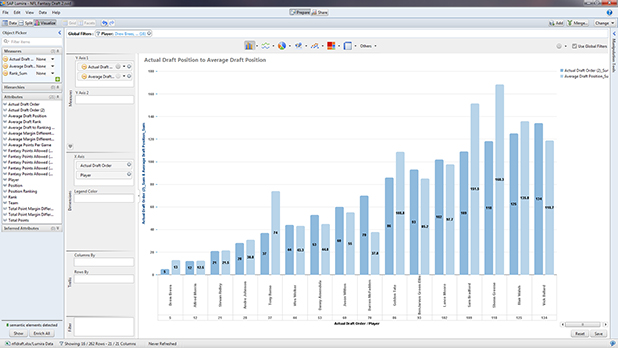 So it looks like I reached for Drew Brees a bit, and took him way earlier than what Lumira data suggests.  I’m okay with this decision, and was really surprised he was still on the board by the time I picked.

My next 3 picks were fairly even to average draft ranking.  I took Andre Johnson 3 picks early but I’m given a choice of receivers still on board (Larry Fitzgerald, Roddy White) he was the best choice.  In retrospect would I have taken Julio Jones if he was still on board?  Absolutely.

I reached big time by drafting Tony Romo.  Even in a 2 QB draft the data does not favour quality QBs.  I could have went with another receiver but I think the statistics were fairly even with remaining WRs and I could get away with a few steals.

Wes Welker will hopefully have a huge season playing with Peyton Manning, and I was happy to still see him on the board.  Amendola and Witten fell later than expected.  Darren McFadden was a huge steal.

If I had trouble anywhere it was late in the draft with picking my bench players.  Looking back, Sam Bradford and Shonn Greene were mistake picks.  I’m okay picking Blair Walsh one round early, and I’m betting on Vick Ballard to pick up the slack for an unhealthy Ahmad Bradshaw.

It was closer to a 50/50 split between statistical knowledge and player/league knowledge.  As an approach, I went with a set strategy of drafting RBs and QBs and it definitely showed in my draft order.

60 seconds in between picks (and sometimes less) left me with no room for instant analysis.  But overall, I am still fairly happy with my picks.  I really wanted Alfred Morris and Wes Welker, and managed to draft both in the projected rounds.

How did you do with your fantasy draft?  Why not download a copy of SAP Lumira and show us your results?

OK, so the Charles Gadalla in me wants to ask, why not try using this with SAP BusinessObjects Predictive Analytics - could that help with our fantasy picks?

LOL !! You're absolutely right, Tammy.  Could do all this analysis (and more) with SAP Predictive Analysis.  Sam, happy to take you through a regression analysis on Position by Weather by Conference by Opposing Team.  We actually did it for the NFL, and we are powering their Fantasy Football page with SAP!!  Compare your analysis with the (SAP) algorithms we've put up here: http://www.nfl.com/fantasyfootball

Thanks for the offer Charles Gadalla!  Don't be surprised if I stop by your desk sometime this week to ask!  I'd love to do a follow-up blog with NFL and Lumira. 🙂

Sam, great stuff here and a good use of Lumira. As Charles said I think you'll get a lot of distance out of the NFL Player Comparison tool for your matchups week in and week out now that you've drafted. But for a first time drafter I think your use of Lumira helped you a lot here!

Thanks Drew!  I signed up for fantasy draft at NFL.com (the only way to access the comparison tool) but got a bit lost.  Would still like to see it though.  Is there an easier way to access it?

Sam, yes you do need to join a league and start a team and then should be able to utilize the player comparison tool, heres a blog I put together walking you through some of the processes -