It’s hard to believe that SCN turns 10 years old this year.  I joined the SCN Team in November 2006, and since then I have had a chance to experience and influence many of the changes and features you see today.  One of those features is the Career Center. It was four years ago on August 23, 2009 when Mark Yolton’s announced, Introducing the Career Center, Part of the SAP Community Network.

The Career Center was originally conceived in 2008 where the business case was developed and socialized within SAP.  This established the project for execution and launch in 2009.  The main goals of the Career Center were to:

While this sounds good, you may ask yourself, “Why a job board?  Do we really need another one?”  This is certainly an understandable question, but the reality is that there is unmet market need. Other career sites tend to be either:

Great!  So, what happened?  How was this service accepted by the community?  In just a few short months by the end of 2009 there were some very promising statistics:

And there were some setbacks as well: 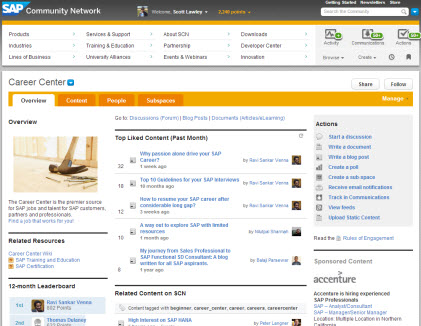 So, let’s fast forward to today.  The Career Center is alive and well.  The vision and mission remain the same.  Let’s take a look at what we have learned.

Although there was some success immediately following the 2009 launch, the effects of the 2009 economic downturn were coming into play.

This did impact the usage of the service early on, but we have seen growing demand throughout 2011 and 2012.

The Job Board Solution

Community complaints about a lack of integration to SCN has been somewhat addressed by the migration of SCN to the Jive platform.  This new community platform provides a consolidated view of blogs, discussions, and documents within the context of SAP Careers, and better overall integration with SAP systems.  Enhanced social sharing features also enable broader visibility of recruiters and job seekers.

The talent recruitment market is changing, and SCN continues to be a leader for attracting SAP talent. Traditional job boards like Monster are moving into survival mode, and online communities are quickly becoming the effective talent discovery channel as they retain talent over the long term.  I certainly do not have a crystal ball that allows me to view the future, but I can tell you that demand is strong for community-driven recruiting, and SCN will continue to play a leading role.

Special thanks to Kuhan Milroy for helping with the historical content.

Scott Lawley that's fantastic journey. Thanks for sharing it.

Nice blog, but in the case the positioning of SCN will change from a knowledge sharing community to a job hunting portal wouldn't it?

You have expressed a valid concern, one that some folks at SAP shared prior to launching this service.  First of all, SCN has been and will continue to be an online community of professionals who are part of SAP's ecosystem.  SCN is a popular destination for developers to access the latest information about SAP products and technologies, and to ask questions and give answers.  And finally, given what I have just mentioned, SCN is a place for professionals to shine, to show the community how much they care and how good they really are at what they do.  Putting the Career Center aside for a moment, I wonder how many SCN members were able to secure a job because of their involvement on SCN.  I don't have hard statistics, but I do know the number is significant.  If this is happening now, what threat then does a job portal connect pose to SCN?

Thank you Scott for giving this overview about the Career Center.

I knew it was there and I had moved some content into it which was posted originally in the technical spaces, but I actually never browsed its content.

Good to know that the Career Center is that much integrated. I hope many more people will read this blog and give their content then a second thought before submitting.

I am certain I will share this blog many times.

I do seem to agree with Omkar that professional forum like SCN should be kept seperately from Job Hunts.

Thank you a ton for giving this overview.