With CodeJams back to back in Bangalore, I would really not want to wait to share the overall experience but would share my experience of attending CodeJam for the first time. I was among the list of people who had registered last time and couldn’t make it. (Craig would hate me for this) Anyone wanting to understand the concept of CodeJam should watch this video.

But before I start, I must say that it was the first time I met Craig in real world and he turned out to be just the same as I had figured out by seeing his innumerable videos and blogs at different sites. Event was scheduled from 11:00am to 5:00pm and it started very precisely on time. With Craig giving the introduction, the expectation from the event was clearly set ‘Play with the technology made freely available on your own’ and of course under the guidance of experts. There was also statistics shown as to how CodeJam is growing rapidly across the globe and the numbers were impressive. With that the stage was taken by NetWeaver Gateway product manager, and he briefed the crowd with Service Builder for developers. He gave us more than enough guidance to get started with.

So did it have a smooth start?

Well, I could be called silly for comparing events but I would say it was much smoother than in TechEd wherein if systems or link do not work, they do, not, work. We had authorization problem in using the prescribed SAP system but that was quickly resolved and we were provided with another application server details to be added in SAP GUI. Now the problem could be if people did not have their laptops ready with GUI and had to install it then. Wi-Fi speed was good and I really did not face any issue there.

I had never thought that soon after entering the CodeJam room, I would become determined to generate a service and would like to consume it via iOS. That actually helped me keep going with little hiccups here and there. I was accompanied by one of the other participants and we were able to generate the service successfully and then play around with URL generated. After generating the service we had realized that there was no data. It was great to see the quick turnover in loading of data by the Gateway team helping the participants. I must say that the group was very actively involved in helping the participants keep going. I could not consume the service via iOS but then had the option to do it via android SDK available here. These certainly get added in ‘things to do after attending CodeJam’ .

What could have been better?

At this point, I really think it to be ‘How could I have been better’ than anything else. It was good that I had a fair understanding of the topic and hence did not get lost there. In general, participants would certainly get more out of event if they at least prepare with the Learning Materials sent by CodeJam team before the event and attend it with some goal in mind. Anyways, the knowledge shared was good enough to come back and start with it.

Had a participant not said Craig, that he had used the term ‘Free Food’ six times already in a short span of time, he would have created a record today. Later he started saying ‘Food is available’ and not ‘Free food is available’.

Gateway product manager at times got into real intricacies and then had to stop himself by saying ‘SAP training would dislike me if I go further’. I don’t often get responses like ‘We don’t intend to build a product like this’! Many participants were attracted to see Craig’s pebble watch and I would see that tomorrow. Lastly, I don’t know why my ipad was said to be looking like a book!

With 11 to 5 timeline, I think I am very satisfied with the event. Not only did I get to gain knowledge but also expand my network with some amazing people. I found the event to be well planned and organized with good lunch and evening snacks break. The food was real tasty and of course free! There was a discussion regarding the ratio of participants registering for CodeJam and actual number turning up on the day. Looking at the no. of attendees, of course it was good but bad when compared to huge no. of registrations which actually does not let few genuinely interested people join. With all this, I am all set to join tomorrow’s CodeJam on HANA with a group photo of today’s CodeJam! 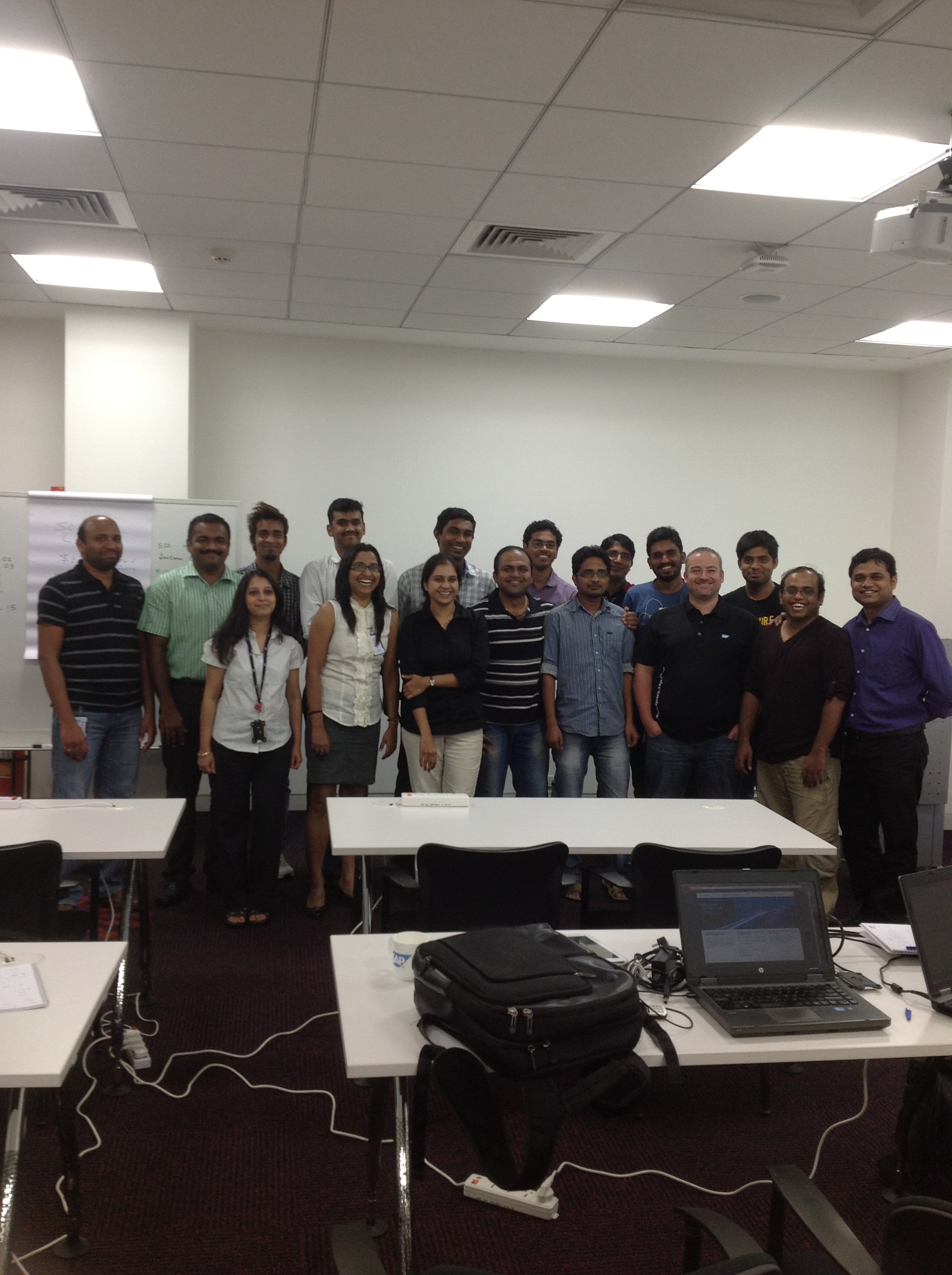 All the photos related to Bangalore CodeJam Sept.6 could be found here.

When I attended Code Jam, I for sure wish I had spent time learning the materials.  For sure I had expert help with me the whole time from fellow attendees.

I look forward to hearing about your SAP HANA code jam experience tomorrow.

also i like to join InnoJam 2013 and Sap Teched.

Thanks Tammy for the encouraging words as always!

A personal commitment forced me to be out of this. Nice to see CodeJam in India and especially in Bangalore but disappointing to see fewer participants.

Can you also let me know dates of InnoJam as well ? And yes when is the SAP Inside Track India being planned ?

SIT for Bangalore has been already announced by Somnath Manna

I would have to find out about Innojam though.