With the announcement of iOS 7 in June, Apple introduced a controversial redesign of their tried and trusted mobile operating system. Designers, critics and style gurus took opposite sides and started fighting.  It certainly was entertaining to watch the Internet space for a while. Some approved of it- they talked and blogged of how awesome, sparkling, elegant, playful and yet simple the experience is. On the other hand- Apple was attacked: “Ugliest ever, crap, unusable, unfinished, designed by a junior designer”- these are a few examples of tweets and opinions coming from Apple skeptics.

I have installed iOS 7 beta in order to have a better understanding of what iOS 7 is all about. My first reaction when I launched the all-new OS: I was speechless, but not in a good or a bad way. I couldn’t make up my mind of whether I really like it, or I really dislike it. First few days I was leaning towards the Apple skeptic’s side. Then I started liking it, or maybe just getting used to it. Some of the new features look quite cool, whereas I wouldn’t be a fan of some others.

In my opinion, iOS 7 is not a groundbreaking innovation, which maybe we shouldn’t even expect. Instead, I think Apple was inspired by, borrowed and tweaked ideas from the competition. I could see influence from Windows 8 and Android. 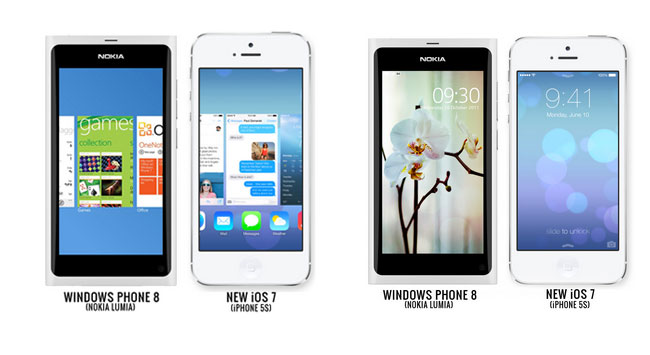 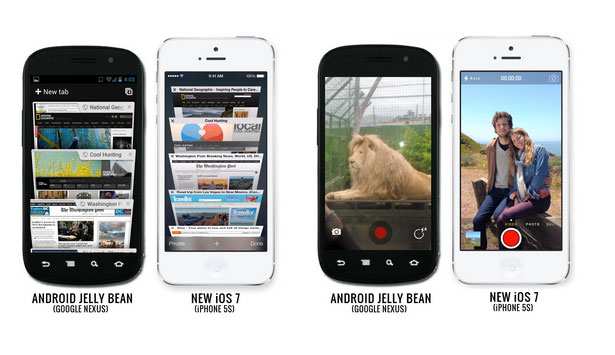 Skeuomorphism in the digital world means that applications are designed to have elements of real world examples.

Historically, the term skeuomorphism derives from the Greek term skeuos, meaning tool, and morphè, meaning shape. In ancient times expensive items were very often re- created from cheaper materials for general public. A modern, non- digital example of skeuomorphism today is a plastic copy of the Adirondack chair, originally made of wood.

Steve Jobs championed skeuomorphism in Apple products believing it would be easier to recognize and computer could be used on instinct alone. It was probably not a bad idea back in the 80s, when GUI was introduced. It allowed users to easier navigate through UIs giving them visual cues that draw comparisons to real world actions and objects. skeuomorphism is not only used by Apple, is widely used in interface design everywhere. Scissors, printer, brushes, pencil, paint bucket- these are all elements of skeuomorphism. 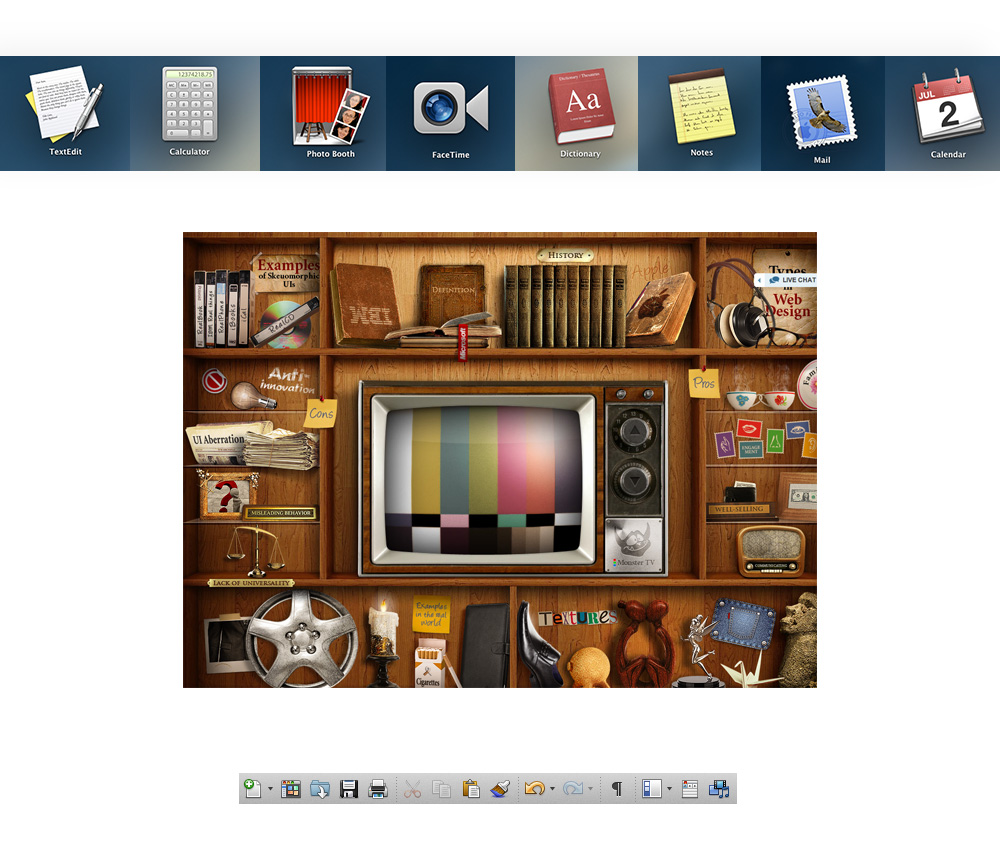 Minimalism is an art style where elements are reduced to leave only absolutely necessary items.  Flat design is defined by flatness of style, such as removing drop shadows, textures and gradients, and it lives in a 2D space.

Some argue that flat design is minimalism, however minimalism can be achieved with any design style.

Windows 8, or Modern UI is a great example of flat design. It was inspired by Swiss Style, which emphasizes cleanliness and readability. Microsoft design language, or Modern UI, previously known as Metro, is a design language where typography and content are the main features. 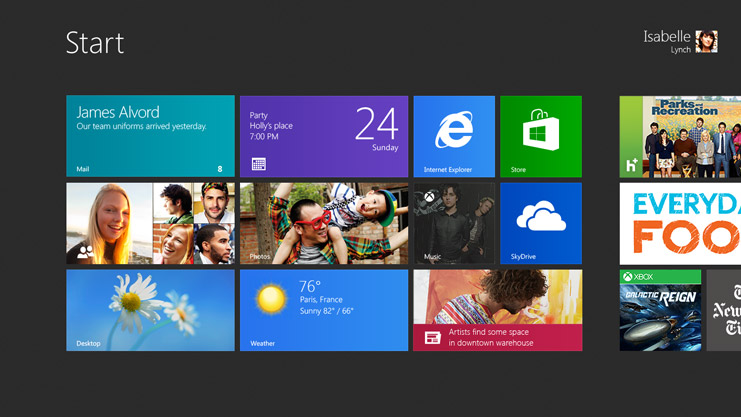 Over the last while, there has been a long debate over which style is better, sexier and more usable: skeuomorphism or flat design. The Internet has been flooded with endless blogs and articles demonstrating advantages and disadvantages of each style. Creatives are divided into two groups, each trying to prove the superiority of their choice over the other.

Many designers state that flat design is a perfect fit for any UX experience. But, there is no ‘right’ design style. Both of them have their own advantages and disadvantages. A good designer should know all of the latest design trends and techniques, but every app should be crafted based on the problem being solved, and not a preference for design.

IS SKEUOMORPHISM DEAD WITH THE INTRODUCTION OF iOS 7?

I think the death of skeuomorphism is greatly exaggerated. Apple did not get rid of skeuomorphism: it enhanced it and made it more elegant and simple. Unnecessary details and ornamentations were removed, making it more airy and light. Textures such as stitched leather, green felt, wooden shelves, curling pages were stripped away, but designs still mimic real objects. Clock, Camera, Video, Facetime, Calendar, Compass icons, rain, snow, sun in weather app, all these designs still represent real world objects, but are executed in a different way. Apple introduced much more animations through layers; it creates sense of dimension and realistic motions, which relate to skeuomorphism. That said, I think it will take a very long time before skeuomorphism will actually die, if ever. 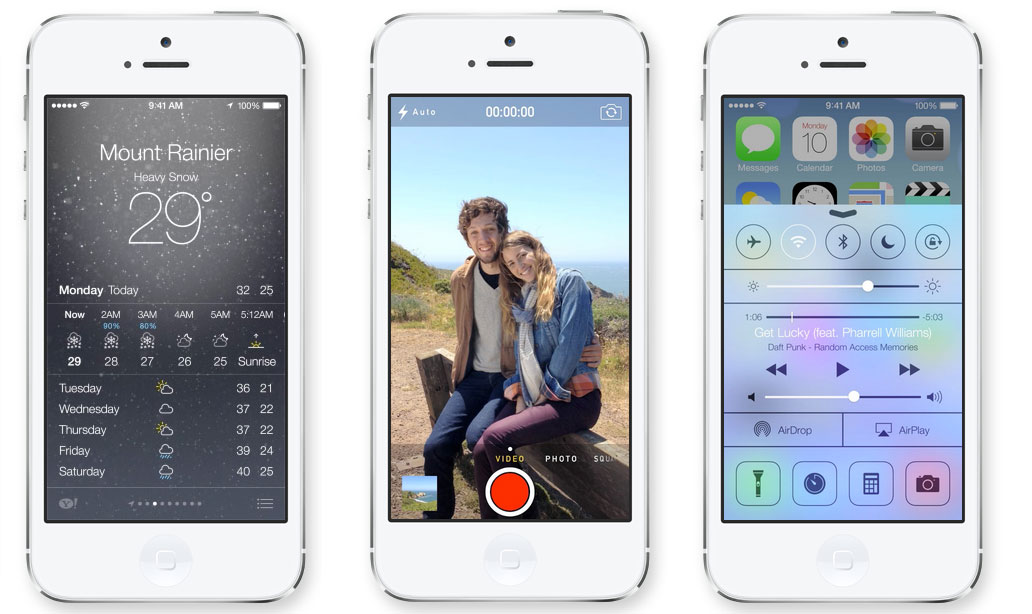 Apple hasn’t had a major design change for iOS since 2007; therefore users were simply getting bored. Apple is known for their intentions of perfection in their products. iOS 7 is far away from perfection, but at least they are heading the right direction and getting rid of unnecessary items. I don’t think it is a major innovation, but definitely a great enhancement. Apple’s fans are not going to disappear, and very soon we will see a bunch of new apps being designed iOS 7 style.

Apple created a lot of turbulence with the iOS 7 and very soon you will be able to judge for yourself whether it’s a fiasco, replication of existing UIs, or a great innovation.

Disclaimer: I have not discussed any undisclosed features of iOS 7. All information relating to iOS 7 is freely available on Apple’s website.

Thanks for giving your first views on IOS 7. So I am concluding that there is no much innovation in the IOS 7 too 😐 .

Great article Egle. Can't wait for the announcement today and for ios 7 to be out for general release. Change is good, although the radical UI change that Apple are planning might have an impact on several aspects of development. I think all developers must be ready to test that the transition to ios7 does not affect their apps in any way.

I read another good article about it at: