I just made this simple analysis using SAP Lumira to let people know about gun crimes in America. US has the highest gun ownership rate in the world according to the reports there are 89 guns for every 100 Americans, compared to 6 in England and Wales.  In this blog, I tried to analyze the gun crimes in various states of America in the year 2010 with the help of SAP Lumira.

I got this latest data from FBI Uniform crime reports which provide the interesting picture of the use of firearm crimes across America. The dataset that I took contains the data related to firearms murders, robberies and attacks and I downloaded from the below link.

I hope this analysis will answer the below queries:

1. Which state is leading in total fire arms murders?

3. What is percentage change when it is compared with previous year?

SAP Lumira helped me to answer above questions and it will helps to take measures to reduce the gun crimes in US for the coming years. From the above it is clear that California is having the highest total fire arms murders with 1,257 and next to that Texas is in leading with 805 firearm murders. The least number of firearm murders took place in Vermont and North Dakota with 2 and 4 murders respectively. 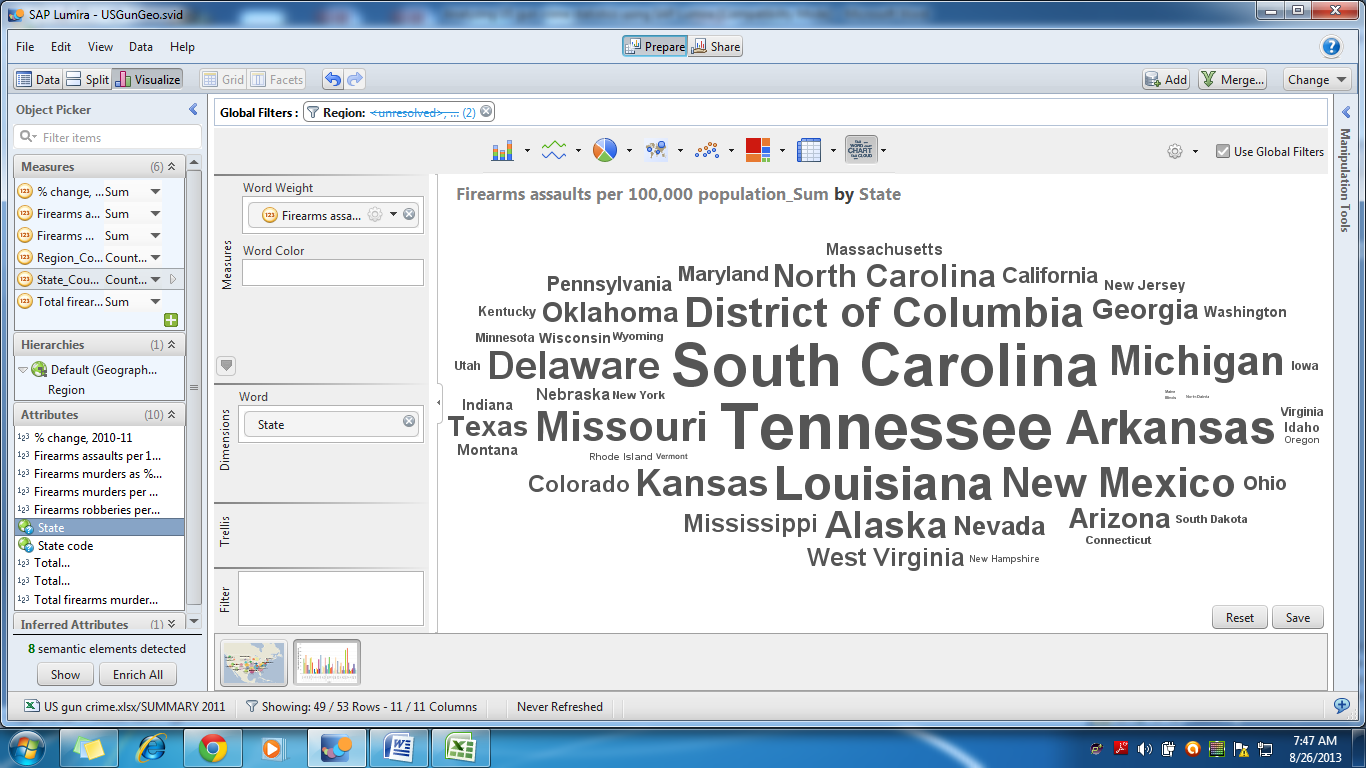 From the below graph it is clear that Tennessee is leading with 137.57 firearm assaults and next South California with 127.8.  Maine and North Dakota having least number of firearm assaults with 4.52 and 4.79 assaults respectively. Wyoming and Vermont are having the highest % change with 120% and 100% respectively, which means firearm crimes in these states are increases to more that 100%. Hawaii is having -85 % and Rhode Island is having -65 % changes in firearm crimes. 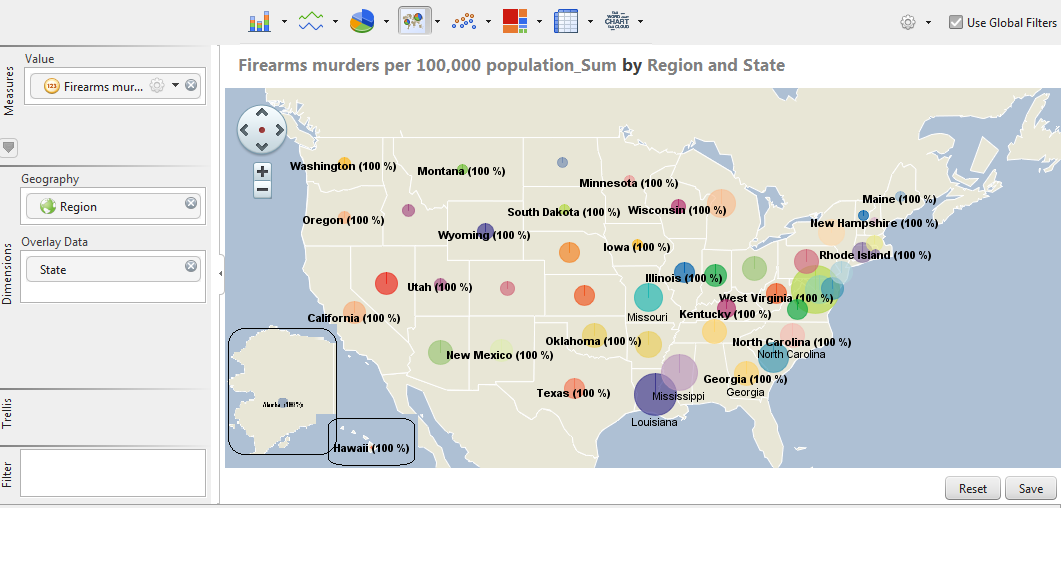 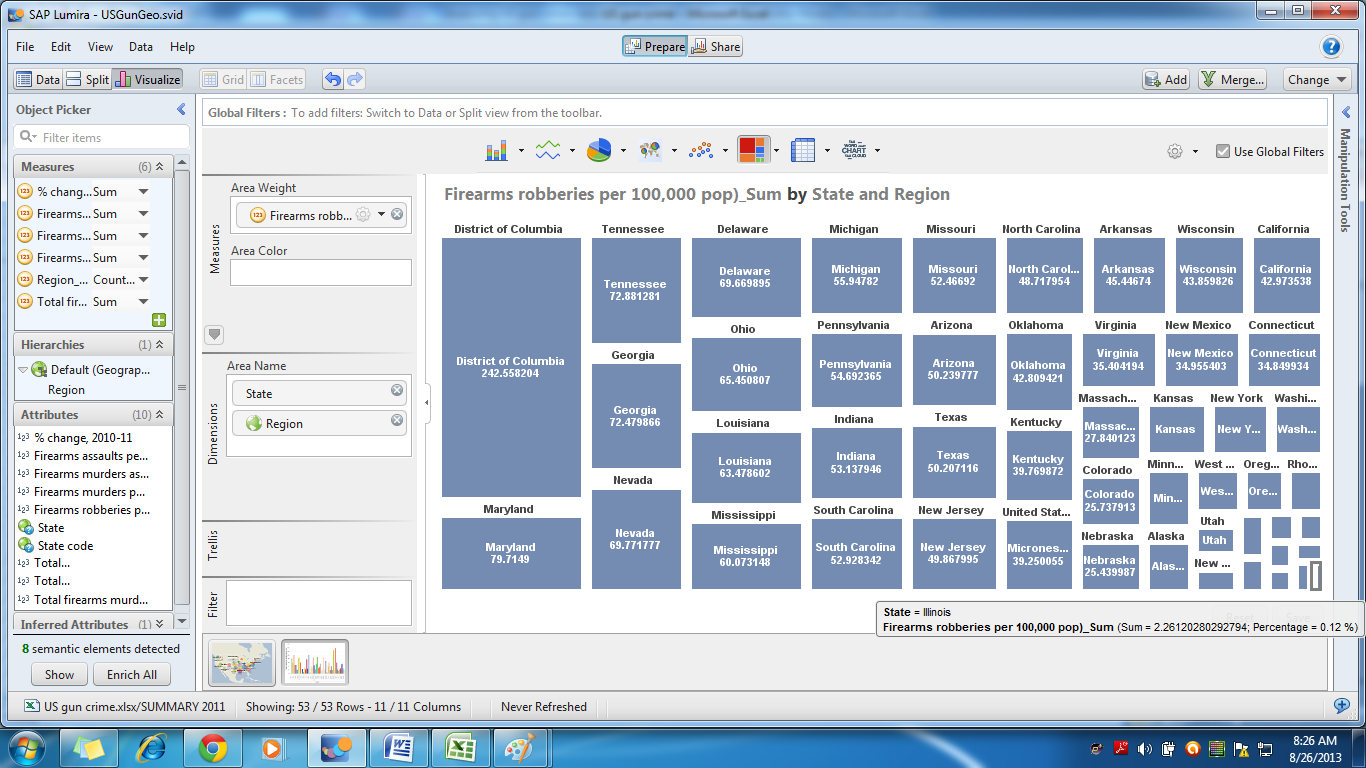 Even though gun crimes has been reduced a lot when compared with last 2 decades still it has to come down when comparing with other countries. I hope this analysis using SAP Lumira will give idea to the governments and local authorities to define policies and strategies to reduce gun trafficking and violence in different states of America.

Fanastic Blog, I know the importance of this website.

When I was in United States, one person showed me gun! I cannot forget that incident.

Thank you so much for sharing this effective blog.

You have faced horrible situation hari 😯 . I hope everything is alright.

Now do the statistics for Mexico.

Sure. If i get the data set for mexico.

Interesting!! Thanks for sharing.

Excellent example of the capabilities and different presentation methods available in SAP Lumira. How long did it take you to complete all the analysis?

Thanks Chris. It took time to select the topic for the analysis Lumira made my task easy, just a weekend.

When I read the conclusion, I was expecting something that correlated the level of gun ownership to the level of gun related murders, but did not see any conclusion based upon data analysis.  Identifying the states with the highest and lowest levels of firearms crimes does not lead to corrective action because it does not have any actionable results.  I would recommend doing some statistical analysis using the same data and possibly involved the SAP-SAS team products for that purpose.

Thanks for your sincere and honest comments. As of now I dont have any SAP tools installed and the data is also not sufficient as it is. Anyway i will write a new blog for "Data Geek Challenge 2014" and corelate things better than this.

I have to agree with You Michael.

Not comparing numbers of gun attacks/crimes to number of guns in population, population density and other figures you had mentioned gives us nothing relevant.

Then we can see tendencies to limit gun possesion over the world which in the end is a villan big advantage. They don't have to be worried that they might get killed during the attack.