Mobile technology hasn’t prevented more than two years of violence in Syria from spilling across the border into Lebanon via firefights, car bombs and more, according to a Financial Times report on Monday. But early-warning apps on smartphones are helping the residents manage.

“For most Lebanese who lived through a devastating civil war between 1975 and 1990, the crescendo of security incidents is something to navigate rather than flee,” Financial Times stated. “Often, as after a politician’s speech at Friday prayers, the sound of shooting will break out in Beirut and residents will try to reach each other by phone and Twitter to work out where it is and what is happening.”

So a Middle East-based startup developed a crowd-sourced app that warns users of gunfights, roadblocks, fires and more. Scryptech’s founder and CEO was inspired to create Ma2too3a following a violent encounter in Lebanon that his wife and daughter barely escaped.

“The best way to know instantly about the beat on the streets is to allow everyone with a smartphone to contribute and alert others about threatening news happening around them,” Mohammad Taha told MSN News, adding that the app had been downloaded more than 80,000 times.

A similar app recently released by the Lebanese army, LAF Shield, lets users share security updates, locate danger zones in conjunction with Google Maps and even send an SOS call, according to Google Play. And a Lebanese telecommunications engineer is developing an app called Way to Safety, which would identify the type of gun being fired and, when reported by multiple users, determine the location of the shooting.

“Particularly useful for nerve-frayed residents of a country where manic partying often overlaps with political violence,” Financial Times stated, “Way to Safety aims to allow users to distinguish between the sounds of fireworks and ballistics.”

“Penn State: Getting Straight A’s for University Facilities with Mobile Solutions from SAP” 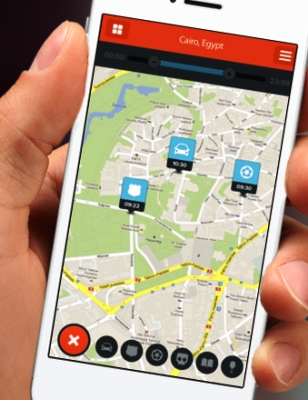