As autumn slowly creeps its way in, pushing the lazy days of summer away, American football fans everywhere recognize that this marks the beginning of high school, college and professional football season. But maybemore importantly, for well over 32 million people it marks the beginning of a new fantasy football season, giving all those that finished 3-12 last season- hope that with a good draft and some luck, this year will be different.

In fact, this year will be different, because the NFL has teamed up with SAP to offer fantasy football fans a better experience. NFL recently implemented HANA as well as Lumira Cloud to offer the Fantasy Player Comparison tool. Now tough football decisions that were previously made by “gut instinct” and justified with “but dude, Manning never plays well in the cold” can actually be backed up or disproved by the undeniable numbers.

The Player Comparison tool utilizes advanced predictive R-algorithms that factor in variables like weather, stadiums, and matchups to name a few. But what happens if you’re a firm believer in always picking the best player regardless of playing conditions? Well they’ve thought of that too, giving the fantasy player the ultimate control to go back and change the weight of certain variables like past performance and playing conditions and then rerun the calculation. So what kind of advanced appliance could possibly handle 750 users running their own specific advanced predictive algorithm at the exact same time? Glad you asked- HANA.

HANA has the ability to handle all of these advanced forecasting calculations being run simultaneously because unlike yourtraditional databases, HANA runs those calculations all-in memory, ultimately giving you sub second returns on your own customized calculation. Combine that with the fact that it’s updating variables like the weather for each game every 5 minutes, and you have yourself a powerful decision making engine.

But what does that mean for your fantasy football team? Let’s take a look at a couple scenarios that the Player Comparison tool can help us with.

Every week during a football season, each fantasy football owner inevitably goes through at least one debate of which player he wants to start and which player he wants to keep on his bench. Speaking from experience, numerous Sunday mornings have been toiled away agonizing over whether to start the consistently better player, or play to the strength of the matchup. Now, the Player Comparison tool can help make those decisions easier.

Let’s take the decision that I’m facing for Week 1 as an example. I have two quarterbacks for Week 1, Tom Brady and Matthew Stafford, who do I start? Now to many this may seem like an easy decision, but I figured we would let the computer decide- 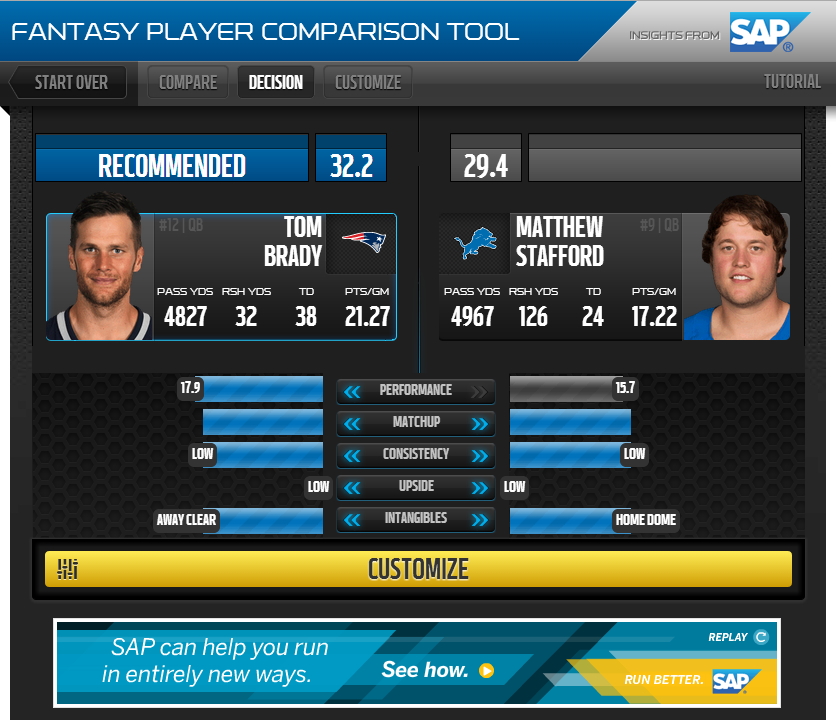 Probably a lot closer than a lot were expecting, with Tom Brady getting the slight nodover Matthew Stafford by a margin of only 2.8 pts. That’s the beauty of going with the numbers, it has no preconceived biased towards Tom Brady just because he’s the top quarterback in the league (is it too obvious that I’m a Patriots fan?)

But let’s dive a bit deeper into this. Brady and the Patriots have a Week 1 matchup with the Buffalo Bills, who as of the time of this analysis are starting a rookie undrafted QB ,while Matt Stafford is going up against a surprisingly tough St. Louis Rams defense. But let’s say we don’t want to put too much emphasis on matchup, as we think it won’t be a huge factor for either team. I can hit the big “Customize” button and use the sliders to customize my calculations dragging the “matchup” slider all the way to the left and re-analyze. 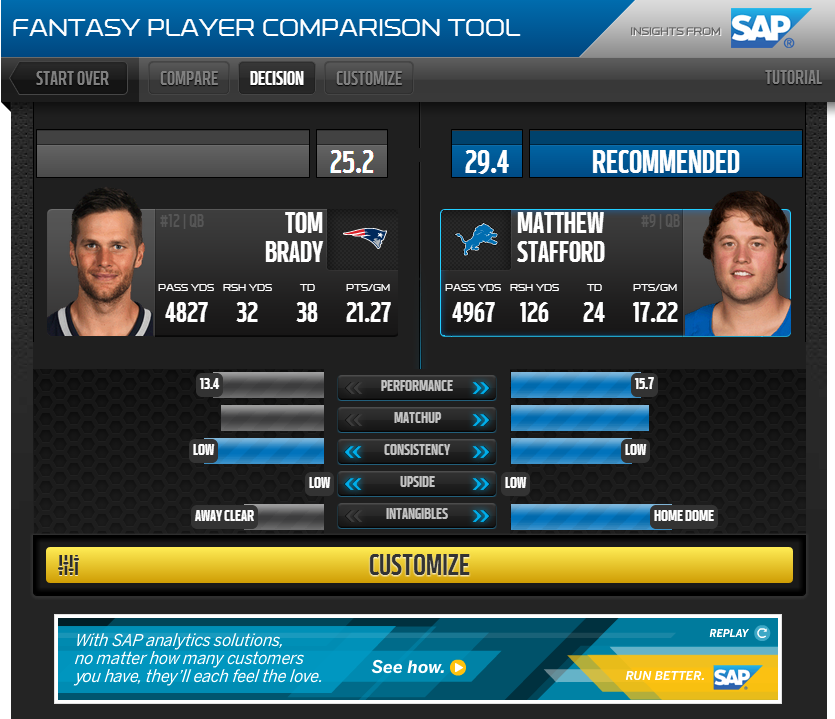 Now with the new analysis we actually see the suggested pick has changed to Matthew Stafford. With less of an emphasis on matchup and factors like Stafford playing at home in a dome weighing more heavily, he gets the higher projected points. That’s why you have to love the numbers; they keep emotion and favorites completely out of the decision making. So with this in mind, who am I starting for Sunday? Yep, still Tom Brady.

Now that we have made our decision of who to start, let’s take a look at a second popular scenario: who to trade.

Now unless you have that fantasy owner in your league that has completely given up by week7 and is happy to trade whoever, trading players can be a very difficult task. Each team wants to make sure they’re getting the most out of a deal, and often times it can lead to hours of repositioning multi-player trades. But with the Player Comparison tool, it will calculate the net worth of both sides of the trade, giving you an accurate assessment of combined players worth, and giving you a baseline for a fair trade.

Let’s go back to the HANA Hawks for another example of the Player Comparison tool in action. My team clearly is all set at quarterback, but I am looking to improve my running back situation. Looking at the various teams I notice that the PLM Pirates have a wealth of running backs and one my favorites, Marshawn Lynch. So I propose a trade of Alfred Morris and Randall Cobb for Calvin Johnson and Marshawn Lynch. While many football fans probably would not need any advanced math to tell you that this wasn’t an even trade, we put it into the Player Comparison tool. 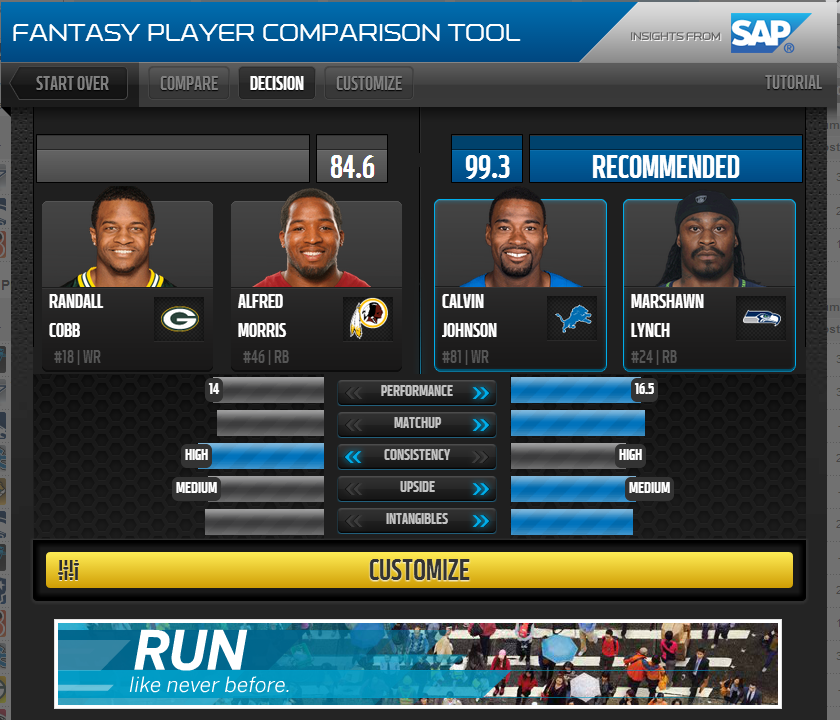 As we can see, unless the PLM Pirates are okay with a total mutiny of their team, they probably would not be accepting this trade. So I can go back into the tool and select other players to make this deal a bit fairer and a bit more realistic. 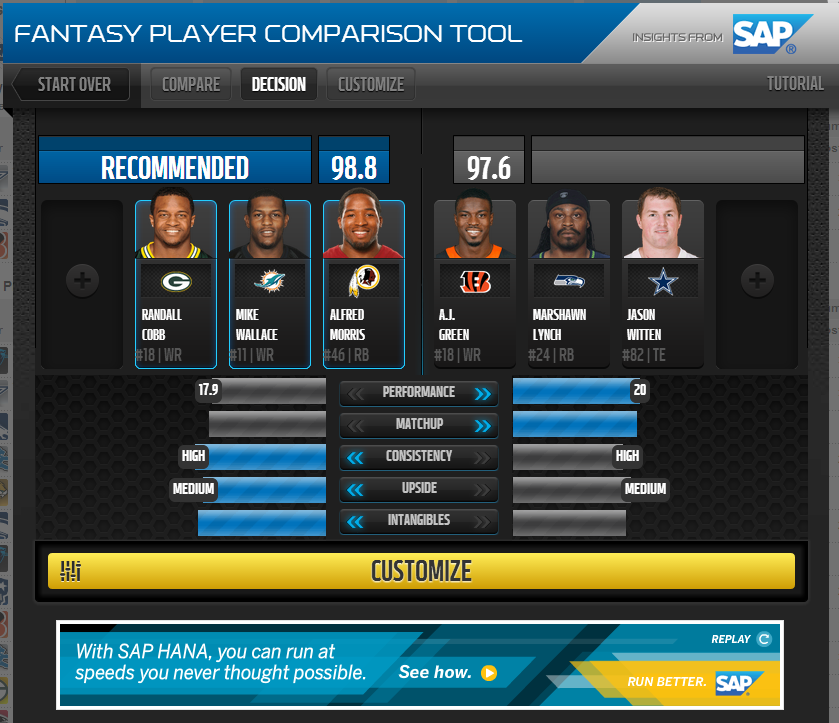 Afterplaying with various combinations of players and running the calculations each time, I am finally able to come up with a perfect match for both sides, showing a point value of 98.8 to 97.6. I now get the running back in Marshawn Lynch I was hoping for while giving up only a few pieces.

Now if I had wanted to go even further I would be able to customize the trade like I did last time, giving a greater weight to factors like matchup, injury statuses or past performances.

In closing, the Fantasy Player Comparison Tool allows users to explore matchups and trades like never before, effectively taking the subjectivity out of those tough decisions. For the first time, users have advanced predictive algorithms at their fingertips, brought to the masses by the in-memory power of HANA. Happy drafting and good luck with Week 1!

Great article, Drew. This is a great reminder that I better review my lineup to ensure I have the right players in the lineup for tonight's game.

Thanks Steve! I was so busy with the analysis I almost forgot to set my lineup as well!

I have a SAp account, but can not seem to find the analysis tool to use it for my fantasy league?

You can access it from the NFL site - http://www.nfl.com/fantasyfootball

You need to set up a fantasy team and league and then access the player comparison tool.

I love the tool, but after I use it a few times I get the message 'Fantasy Player Comparison Tool is over capacity'. It says to wait and try again, but there is no indication as to how to solve the problem. I cannot tell if I have done something, or if there are just too many users.