Below is a brief description about the demographic indicators:

1. Total Population: It is the total number of people living in a country.

2. Population Growth Rate: It is exponential rate of growth of midyear population over a period of an year. It is expressed in %age.

4. Crude Birth Rate: It is defined as number of live births per 1000 of population.

5. Crude Death Rate: It is defined as the number of deaths occurring during the year, per 1000 population estimated at midyear.

6. Fertility Rate: It may be defined as average number of children that would be born to a woman if she lives to the end of her child bearing or reproductive period and bear children in accordance with age-specific fertility rates.

7. Infant Mortality Rate: It is the number of deaths of children below 1 year of age per 1000 live births.

8. Maternal Mortality Rate: It is the number of women who die during pregnancy or within 42 days of termination of pregnancy due to any cause related to      or aggravated by pregnancy or its management.

These indicators are very essential for the governments of the countries to plan for the services and facilities required for its people in future.

I have created my dataset from the data provided by www.worldbank.org for the purpose of my analysis. The dataset contained the country name & code, indicator name and their corresponding values for years 2006 to 2011 as shown below: 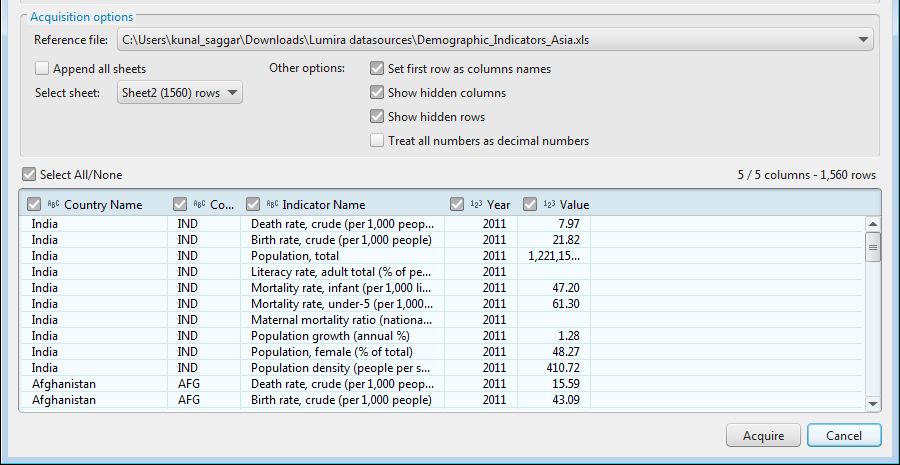 After acquiring the data, i was ready to proceed with my analysis.

The first and perhaps the most important aspect for planning for any services for the country is to find or estimate its total population. Once, the total population is known, proper planning can be done keeping in mind the required scale of services. For comparing this, I plotted a ”3D Column Chart” for the indicator ‘total population’ for years 2006 to 2011 as shown below:

It was clear from this chart that India and China are by far the most populated countries. They are followed by Indonesia, Pakistan, Bangladesh and Japan.

The relative ‘total population’ among these countries can also be viewed with the help of “Tag Cloud” visualization:

From this visualization, i was bit surprised to find that Singapore has the highest population growth rate of over 3% over the period of 6 years. So, i created a “Donut Chart” to see the growth rate in Singapore for each of these years.

From this chart, it was clear that the average population growth rate is highest in Singapore largely due to years 2007 and 2008 and that post 2008,  the growth rate has decreased.

To find which of the countries are densely populated, i plotted a “Geographic Bubble’ chart as shown below:

It could be inferred from this that Macau and Singapore are most densely populated.

The average value of Crude birth rate and Crude death rate of different countries in Asia & Pacific can be found with the help of a “Line Chart” columned by ‘Indicator Name’ as shown below:

Rate of 2 children per woman i.e. fertility rate of 2 is considered as replacement rate for population. Anything above 2 means that the population of country is growing and rate of below 2 indicates that the population is decreasing in size. The below “Geo Chloropleth Chart” displays the comparison between different countries in the region:

It can be inferred from this visualization that population of Australia and China are decreasing with time and their governments whereas Afghanistan has the maximum fertility rate among the countries in the region. Since the ‘total population’ of Australia is very less, Australian government needs to make policies to encourage higher fertility rate.

The “Heat Map” Visualization below shows the values of both of these indicators:

It can be easily inferred from this visualization that Papua New Guinea has the maximum average of Maternal mortality cases followed by Afghanistan, Bangladesh, Pakistan and India. One can also conclude from this chart that the Infant mortality rate is highest in Afghanistan, followed by Pakistan, Mynamar, India and Papua Guinea. Thus, providing greater health care knowledge and facilities for the new borns and their mothers need greater attention by their governments.

The “Pie Chart” visualizations below displays the relative comparison of Infant Mortality Rate across different countries of the region:

Maternal Mortality Rate can also be represented in a similar way as shown below:

Thus, with the help of various charts/patterns provided by SAP Visi, i was able to compare different demographic indicators and was able to determine which countries need to address these to provide better services and facilities for their citizens.

I hope that you like this blog and I am looking forward for your comments and suggestions..

A great insight about the Demographic comparision of APAC region.