What has really fascinated me over the years was the growing population resorting to the web world in order to achieve so much! I have always been curious to know how many users flock to a particular site, which site is the most popular, which is the fastest, on which site do users spend most of their online life, and particularly from which region of the world.

Data geek challenge through SAP Lumira gave me a way to gain insights into such demographic metrics. Not only in fascinating ways can we visualize the data, but also there is no limit on the kind of analysis we can partake using the SAP Lumira Tool. The tool is user friendly too, allowing us to come to conclusion in minutes, if not seconds!

So, here is my data story about Websites Popularity or Web Traffic analysis of various popular websites that are up & about these days, that are the most bookmarked sites in world today.

The data that I have gathered took a while for me to extract from alexa.com. Nonetheless, it was an effort worth the results. It is taken from the metrics of the last three months (June, July, August 2013). Therefore, this data reflects the current scenario of the online internet industry today.

Here is the data (excel file) I uploaded into the SAP Lumira: 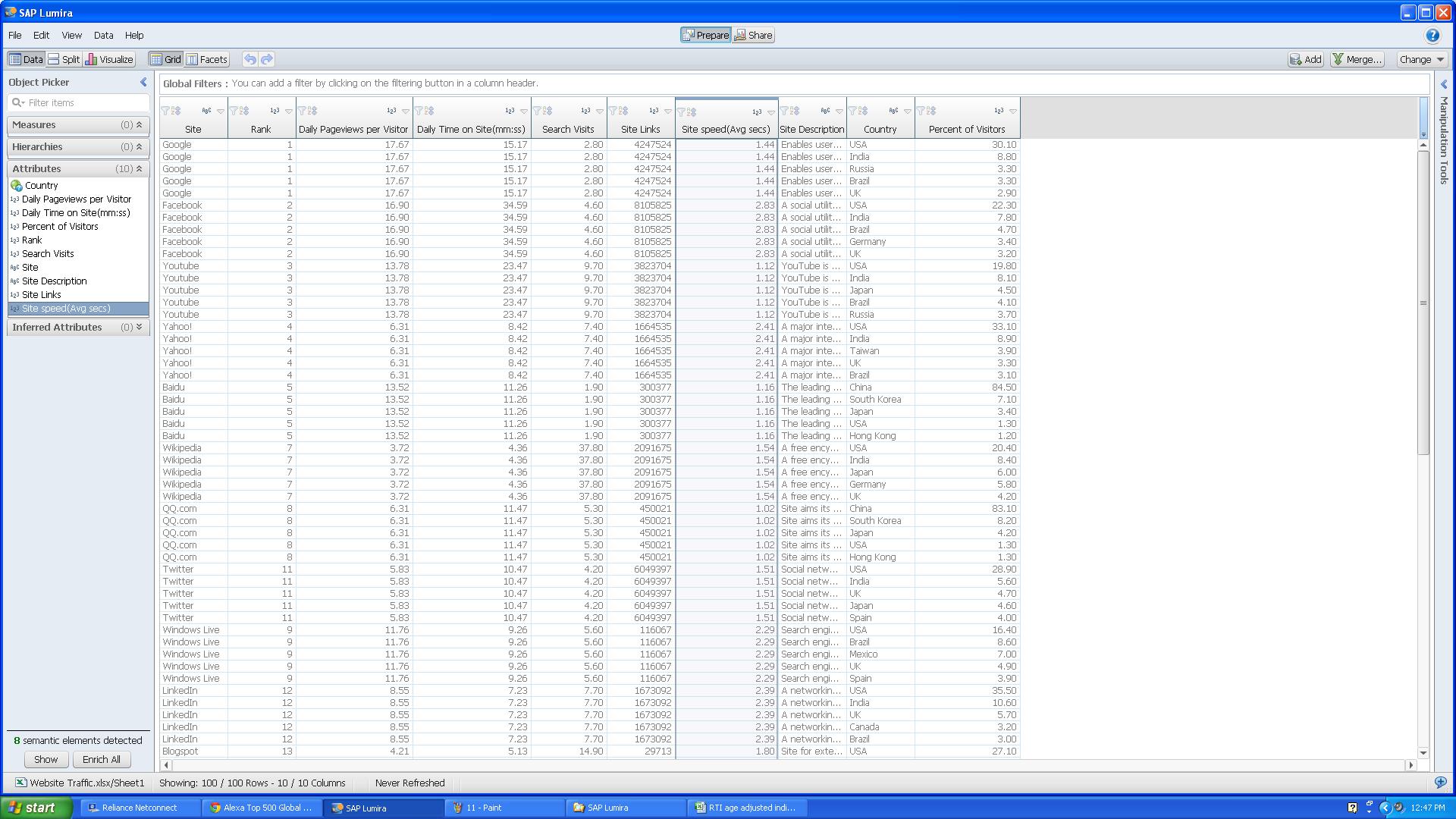 Here is my first analysis in a bar graph format.This view shows on which site the users spend most of their of online life (in blue) as well as the estimated daily unique pageviews per visitor on that particular site(in pink). 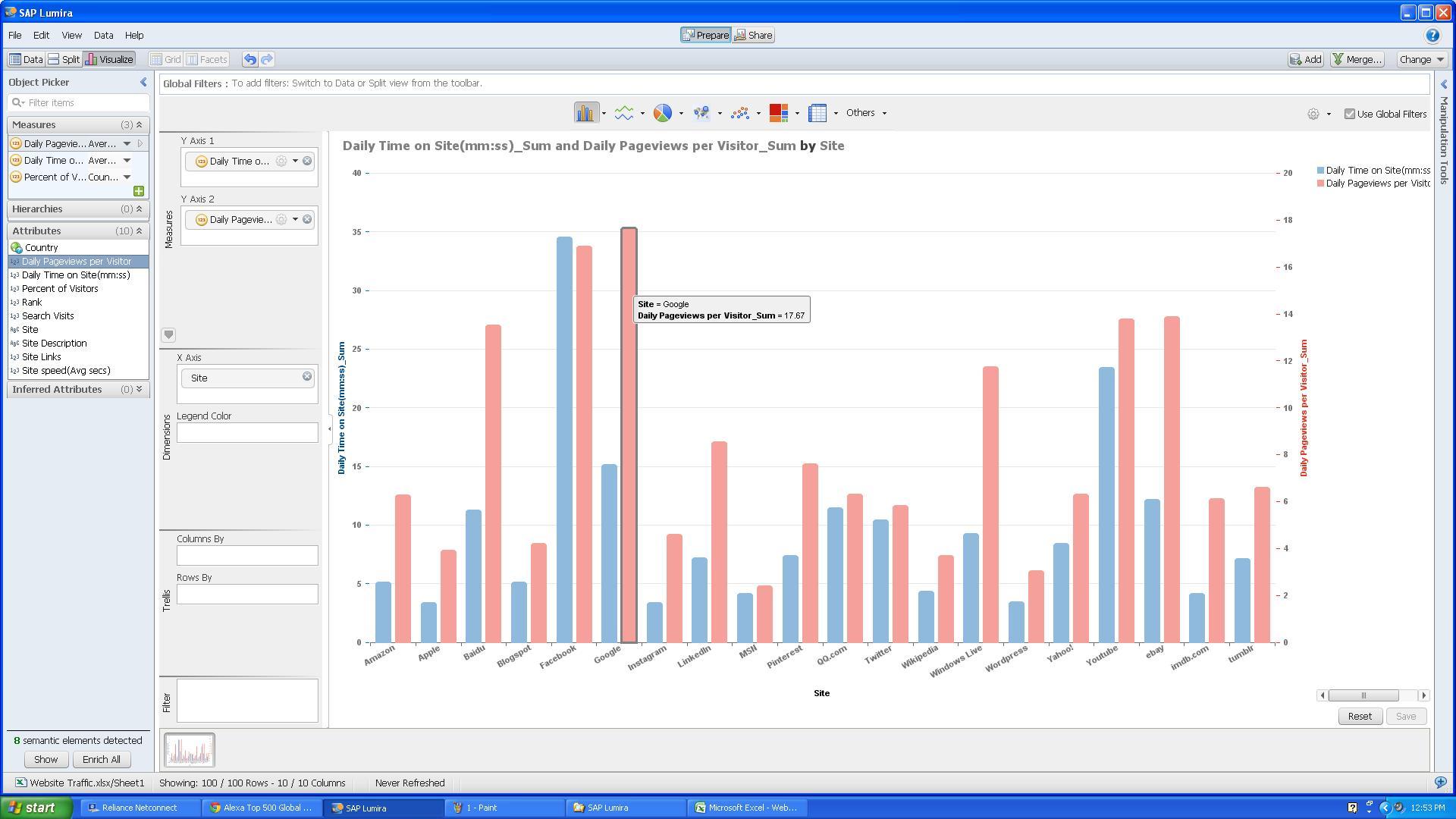 Following similar data in pie chart format also contains depth for Daily pageviews that’s Estimated daily unique pageviews per visitor on the site. It is no wonder facebook, google and Youtube has the most. 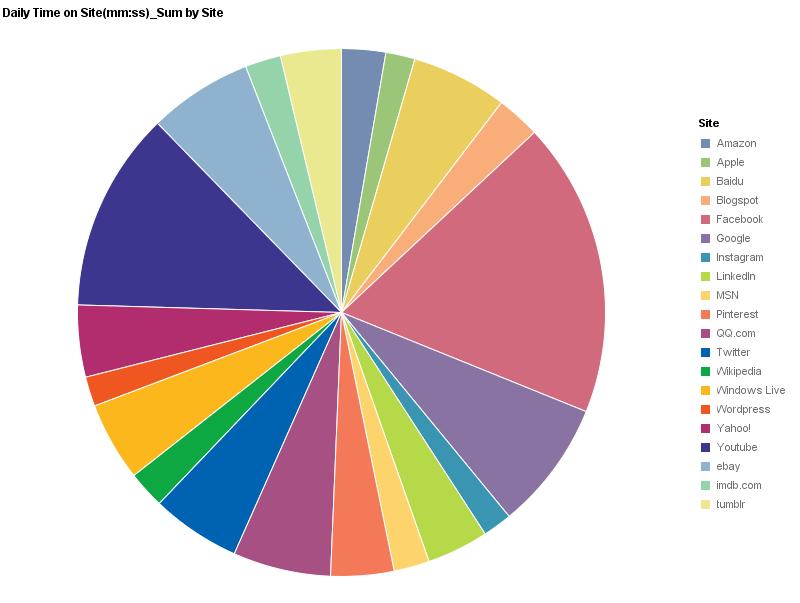 Following shows the percentage of visitors on each site in various regions of the world. USA being the hub of the internet, obviously has the most number of visitors. Interesting observation is that Amazon & ebay being its most visited sites show a lot of online shoppers are from this region. N the other hand QQ.com being mostly popular only in China, US has the least while India and Brazil have no visitors.

Following two show the popularity of sites indicating what percentage of visits to this site come from a search engine. This information will be useful in case of web crawlers & for the adveristers. Site link indicates the sites that link to this particular site. 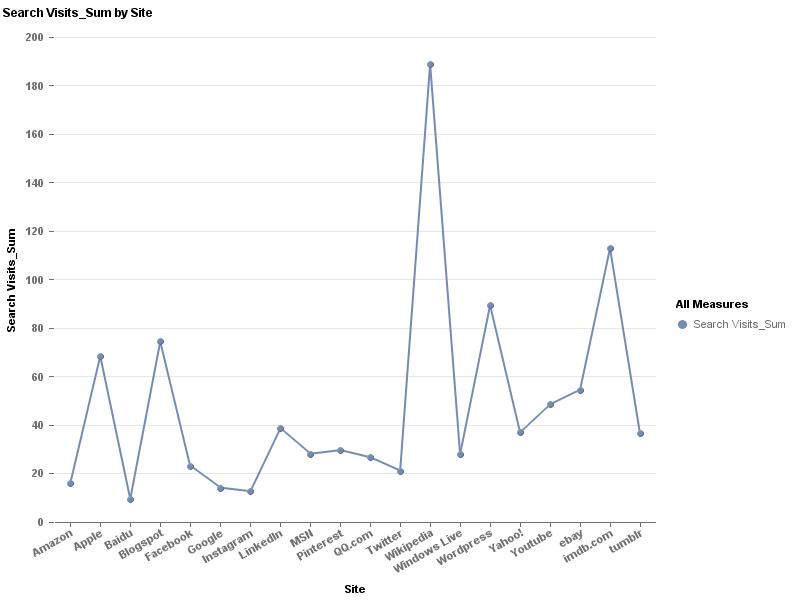 This one contains filtered data only for the first 4 ranked websites: 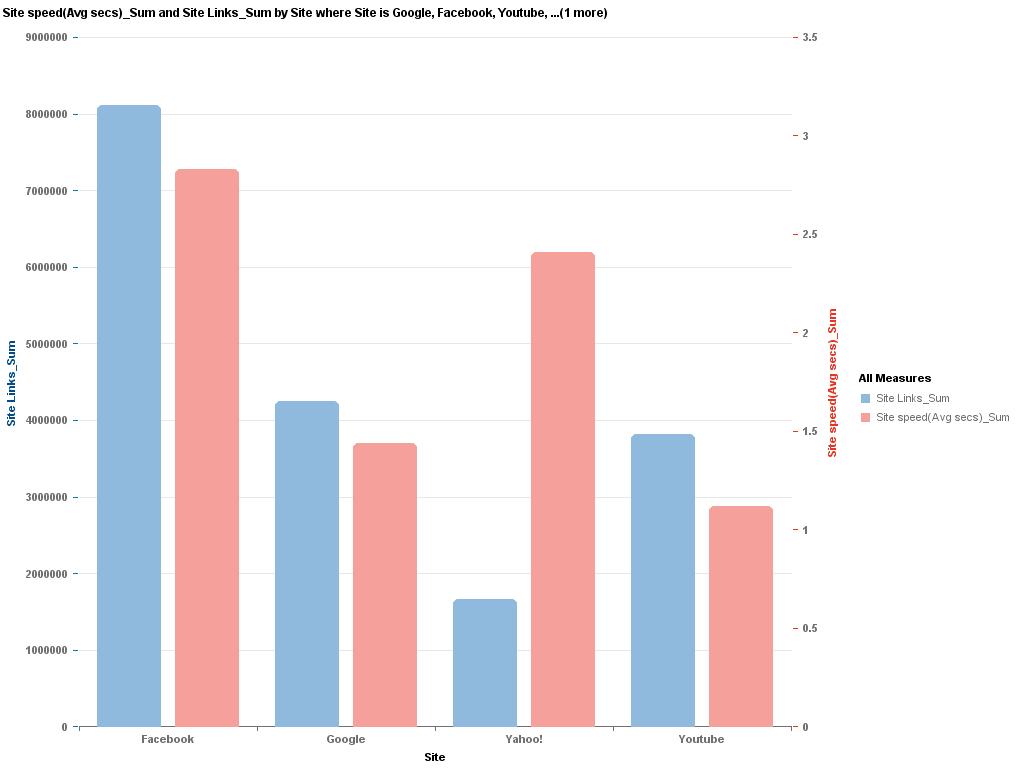 Following shows geographic maps. First showing percentage of visitors in various Countries (USA being the most) while the second showing statistics for all websites in that particular region. 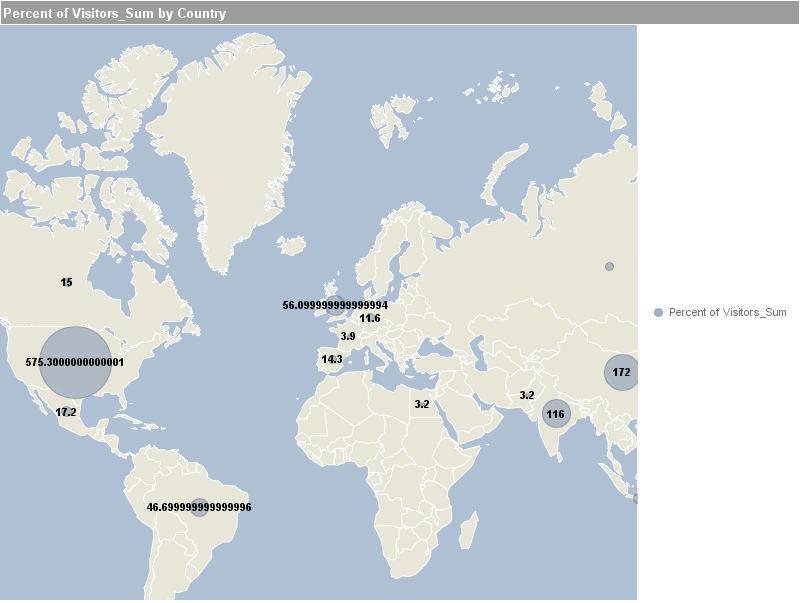 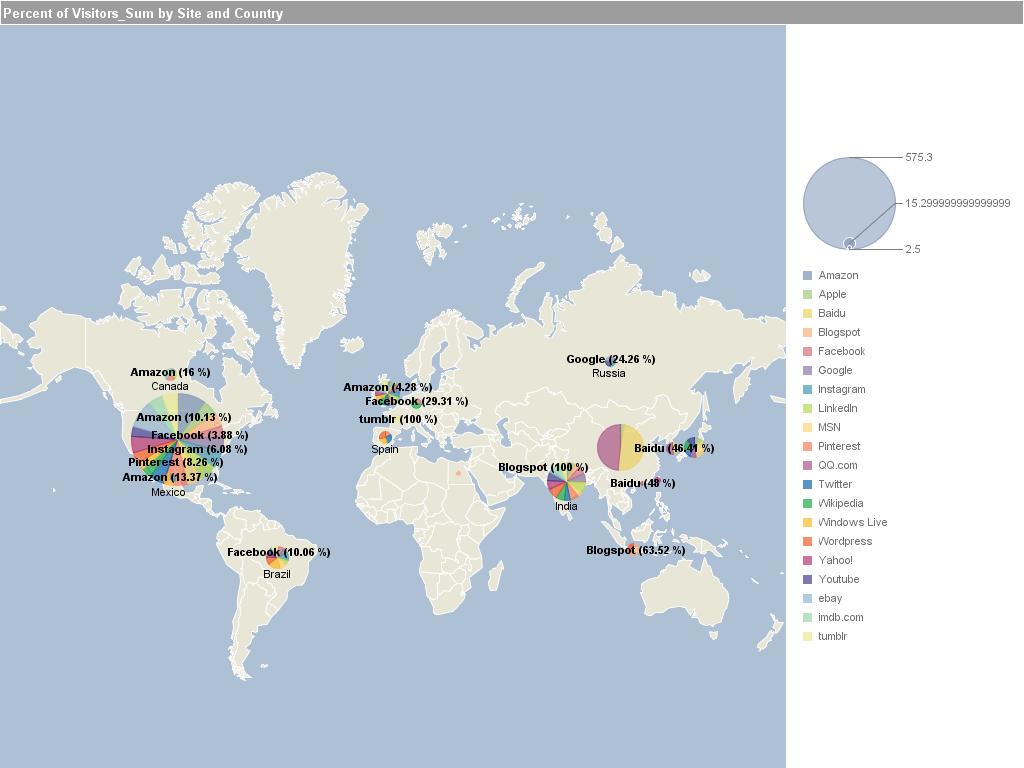 Following shows the sites most reached by crawling from other sites (by area) and the most sites links present on other sites that link to this page(by area color).

Following show tag clouds – first showing the first 3 ranked websites (Google being the first) obtained by “ranking” the statistics from “Bottom”, while the second shows the fonts in descending order of percentage visitors for various countries of the world. 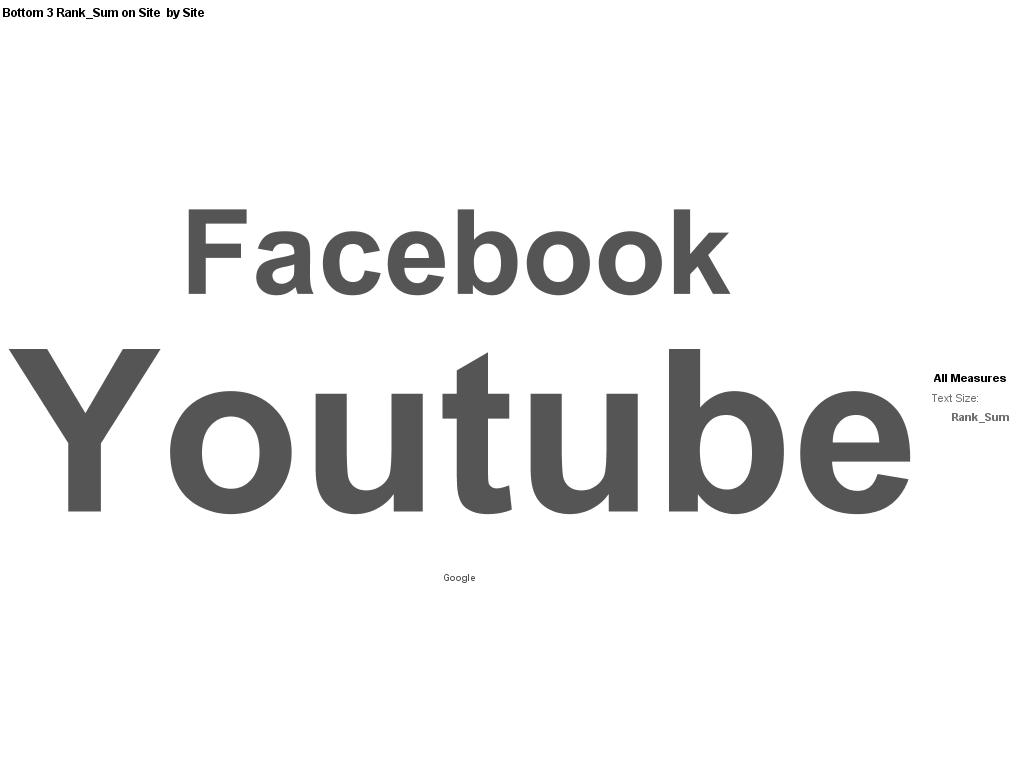 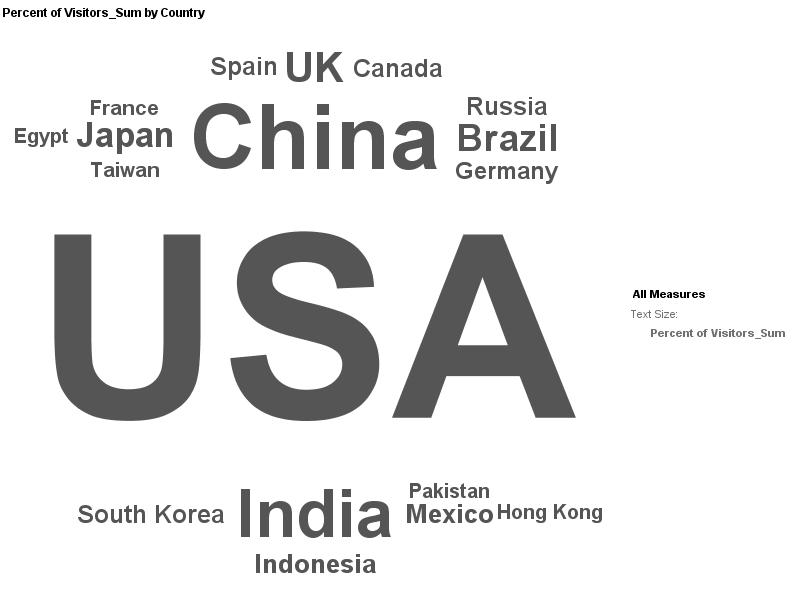 Following shows visitors per site along with the site speed (nstagram being the fastest while Facebook being the slowest) arranged in ascending order(of speed). The latter chart shows filtered data for four countries only.

Following line chart shows users, on an average, spend most of their time on facebook as compared to other sites and google has earned a Global First rank. 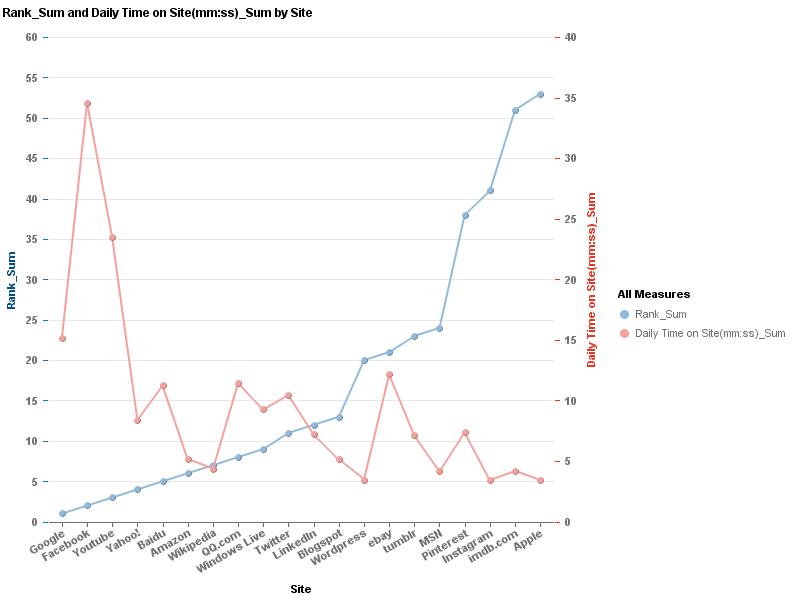 Following scatter plot visualization lets us visualize a lot of information: Rank on the X-axis, Daily pageviews on the Y, the bubble width lets us compare the site speeds whereas the bubble color denotes the website.

We can produce countless more visualizations using the above data & come to conclusions on so many different aspects.

Here is a video that shows how to go about in the tool & how to easily play with the data in order to get useful information. Video.

Thank you so much Jitendra Kumar Kansal ! Glad you liked it! 🙂

It is simply awesome ...