SAP Insider APJ is upon us next week, September 3-5. We’ll be at the fabulous Marina Bay Sands Hotel in Singapore, and have we got a show for you.

If you were at last year’s event, or followed along, you’ll remember that amazingly, it was the first ever Insider event in APJ. It was long overdue. We had a very enthusiastic response. People saw the value, and a lot of them are coming back and telling other people. We’re expecting about 600 people or so. 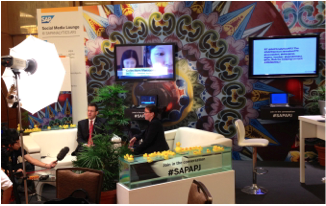 We’re going big this year. The conference will be three full days, with four full tracks—GRC, Finance, BI and HR. We’ll have over 100 sessions from SAP experts and from customers who are using the solutions and can speak to the business value they’re getting.

Some of our #SAPAPJ mentors will be on hand—Alex Andrenacci from Accenture, Clint Vosloo of EV Technologies, Marek Kowalkiewicz with SAP labs and Josh Fletcher from the DSLayered gang, along with a ton of global SAP executives. This is part of our investment in closing the skills

We’ll have twice as many exhibitors and partners as we did last year. We’ll also have at least twice as much social media activity.

The talk of the show last year was the social media lounge, the first ever at an SAP event. Now you’ll find social lounges at many of our events. So not to be outdone, we will have two lounges. The first one will be in the common area where we’ll have flat screen TVs for watching the social streams and the leaderboards for some of the events and contests we’ll be having.

The second one will be on the show floor and it will be an area where people can gather and  you can come and practical tips and hands on help for growing your social presence from our social media team, including the famed SAP BI blogger Timo Elliot (@TimoElliott) and from Drew Calin, a social expert from LinkedIn’s Singapore office.

And, there will be ducks. Last year’s lounge featured a tank full of yellow rubber duckies, representing the theme of “ducks in the water”—when it comes to analytics (or many things in life!) you don’t need to wait until you have all your ducks in a row. Just get some ducks in the water. The ducks were a big hit, with people stopping by to photograph them in their tank, and eventually they made their way all over town. 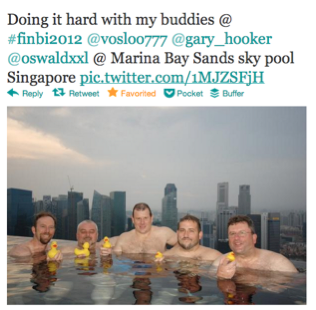 This year, we’ve got ducks in every color of the rainbow. I also found some designer ducks that are really cool—my daughter wants one, and everyone in the office has been fighting over them. We’ll be giving them out as prizes for some of the contests.

We have more firsts for APJ, with pre-events for just about everyone on Monday. On We’re co-hosting a free CFO summit with Deloitte for about 100 or so CFOs and VPs of Finance from all over APJ.

We’ve also assembled the first regional BI Strategic Advisory Council, bringing together some of our top BI customers in Southeast Asia to share their knowledge and best practices.

Finally, there will be a partner summit, which I’ll be speaking at, with over 85 partners from the region coming together. The first part will be focused on sharing what’s working in the region sales-wise and what’s coming down the pipe in terms of products and promotions, and the second part will be one-on-ones where partners can sit down with SAP experts for some really meaty discussions and Q&As.

It’s not too late to register, and why not make a week of it? Take in a Monday event, come to Insider, and take your duck on the town Friday. Hope to see you there!

Last years FINBI2012 SAP Insider APJ conference at Singapore was simply awesome! This years conference sounds even bigger and better!  I still have one of those yellow ducks in my fish pond at home.  I learned so much at the conference sessions and really enjoyed meeting people from other APJ countries. The food and atmosphere was electric. It was really great to share our experiences with each other as we are all on similar journeys.

Someone, please send me a rainbow coloured duck to add to my collection!

All the best and have a great conference this week.  Get your ducks in the water and get started !! 😉