Follow RSS feed Like
0 Likes 573 Views 2 Comments
On June 13th 2013, studentsof three different faculties: Faculty of Organizational Sciences, Faculty of Economic and Business (both membersof University of Maribor), and from Faculty of Business Studies, came to Brdo pri Kranju to attend SAP Forum Slovenia. But the majority of those students  came to attend 1st Student Design Thinking Jam@SAP Forum Slovenia. After inspiring keynote “Re-imagine theFuture of Your Business”, delivered by Kai Finck (Senior Vice President for Office of the CFO Solutions), 1st SAP Student Design Thinking Jam@SAP ForumSlovenia has begun.  18 students attended Design Thinking Jam, while other 6 students decided to attend various presentations which happened during the day.
During the Design Thinking Jam
Workshop was organized and run together by SAP University Alliances and SAP E&C Solution Center. Everything started with introduction of the Design Thinking methodology and how to apply it.  At the end of presentation students met their challenge of the day: »Zakaj ITi z vlakom?« in English »Why to go by train? – How to popularize the usage of train transportation among young population with help of technological innovations”. 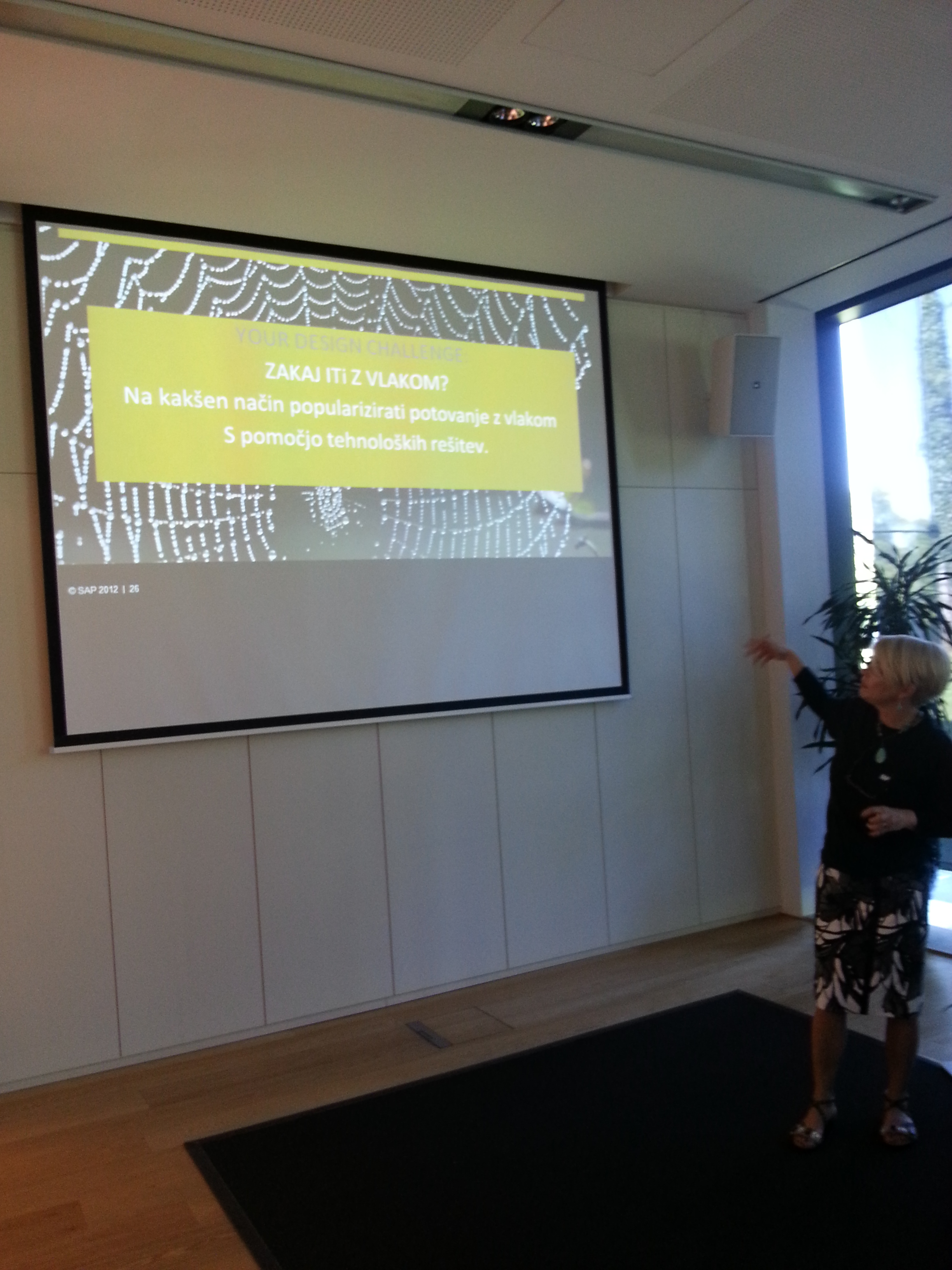 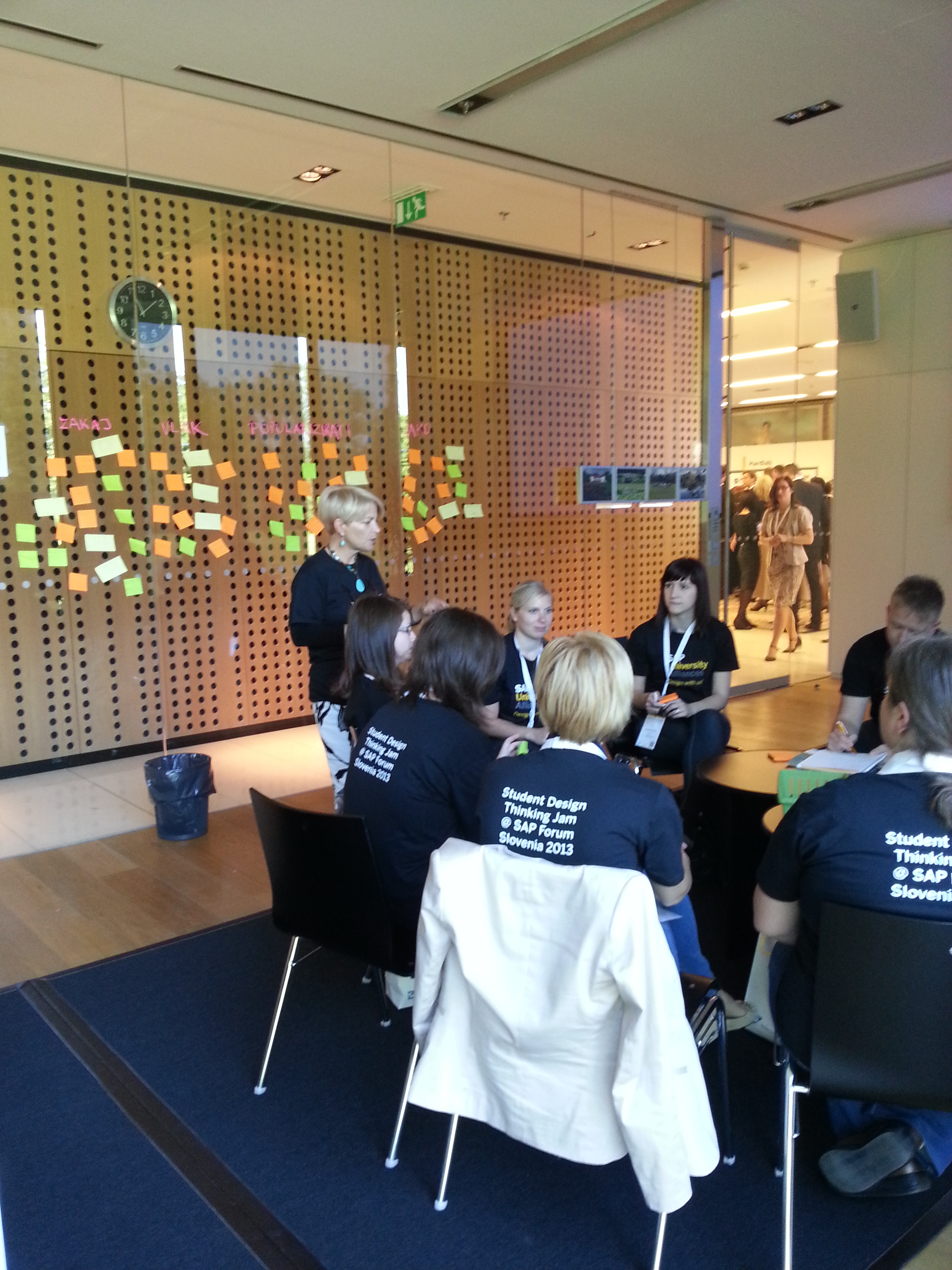 Students were randomly divided in two groups, based on their answers to three simple questions. This phase was also used as “warm-up” for students. After students were warmed-up, the show began. Till the lunch students participants went thru the phases of Understanding, Observing, and Defining point-of-view. Students understood what their task is, which they approached with fresh out-of-the-box thinking. 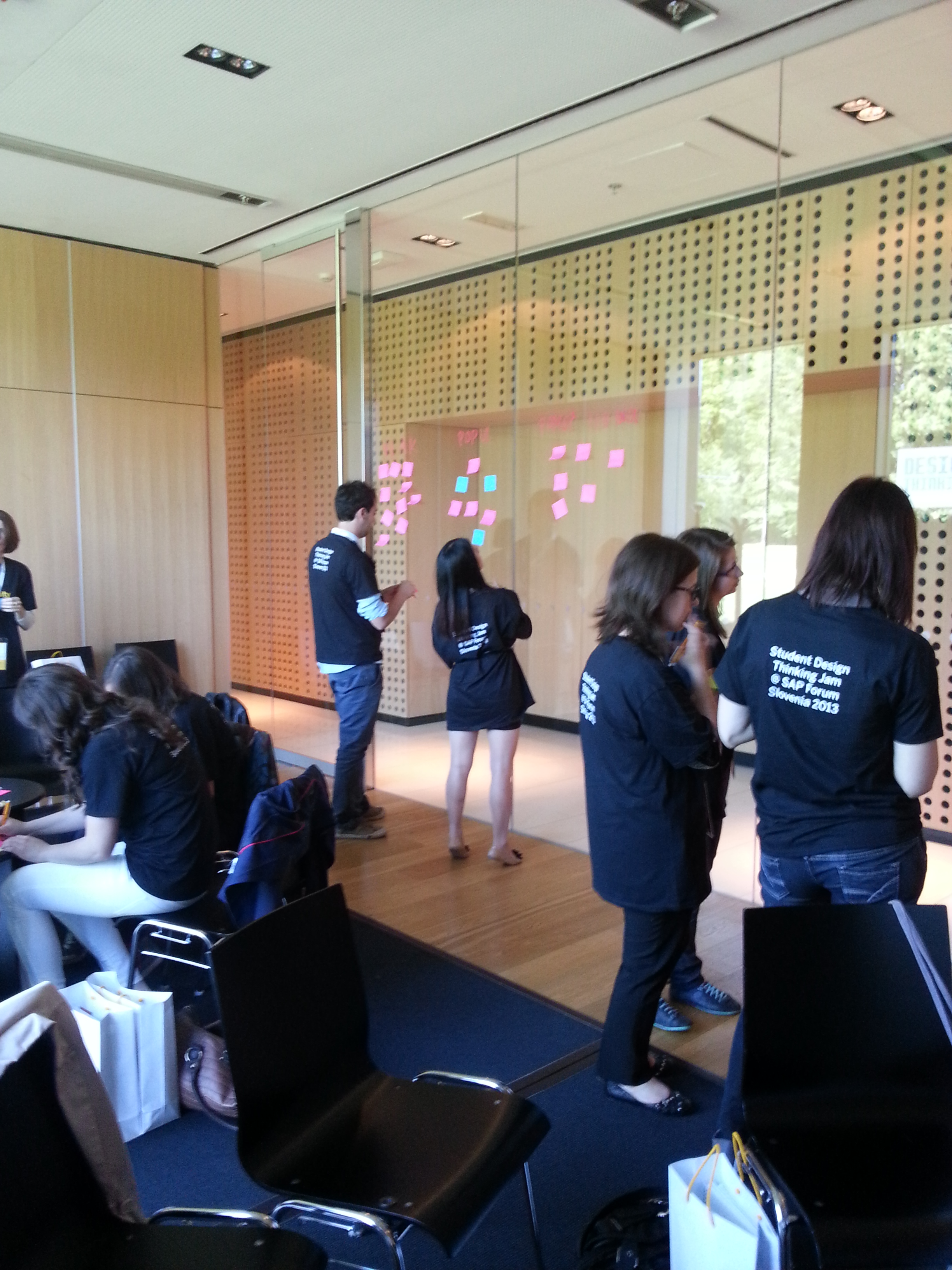 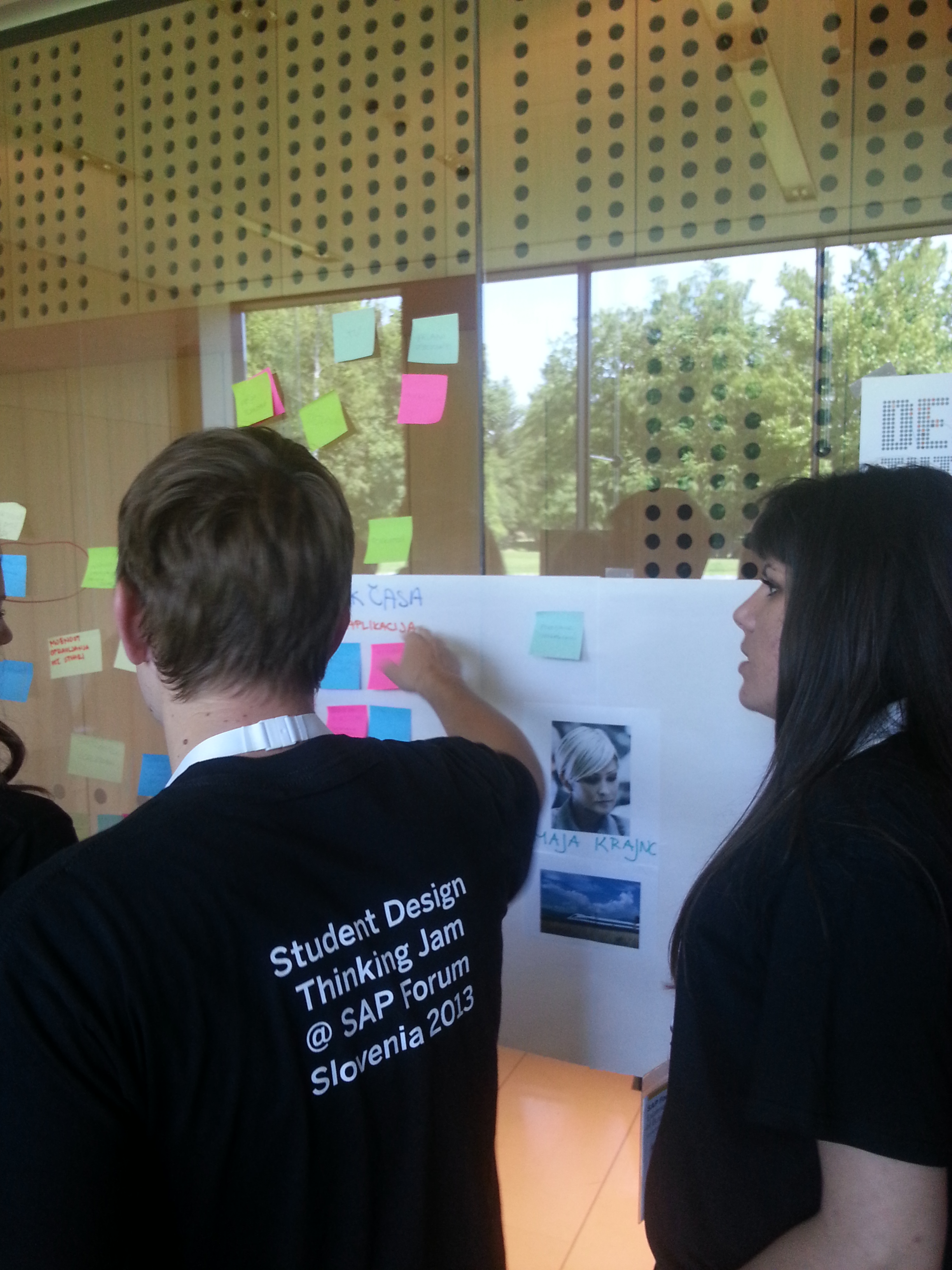 During the lunch students had time to refresh themselves, and some of them also used the opportunity to test themselves  in basketballfree throws challenge.  As Slovenia is hosting Eurobasket 2013, this was the theme that accompanied this years’ SAP Forum in Slovenia. After the lunch students continued with further phases of Design Thinking, and they were getting closer and closer to their final prototype of the solution.
After  five hours of hard work on one side, and also a lot of fun on the other, each group  presented their prototype to the other. The prototypes were quite similar, so they took the best parts of both prototypes and put together the final one.  After 10 minutes we all moved to the biggest conference room, where the presentation of final prototype took place on the main stage of SAP Forum, in front of  200 SAP customers and partners. SAP Forum attendees finally found out what was going-on in »glassy« conference room covered with post-it notes, and presented prototype was rewarded with long applause. 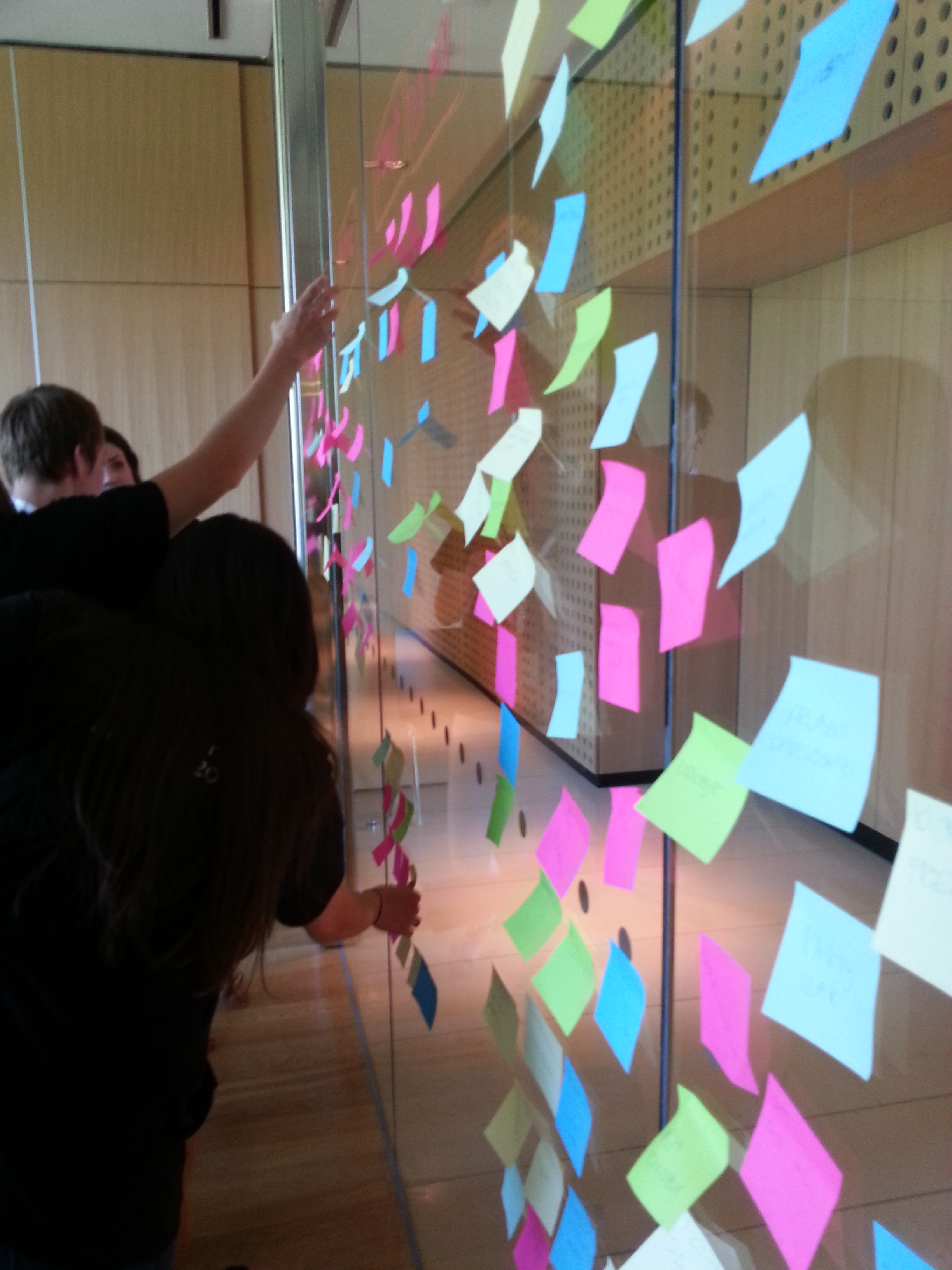 Right after presentation, SAP Slovenia colleagues made a short play – Railway transportation in 21st century by SAP, with which they showed how SAP is transforming the railway industry unsing HANA, ANALYTICS, CRM & MOBILITY. Four students also took part in this play as pasangers on the train. It is interesting that students’ prototype of mobile application had many components which were later-on presented as part of SAP Mobile Solution for railways. All in all, students and professors were exicetd about the whole Design Thinking  Jam, and they are looking forward to attend similair events in the future.