My #SCNis10 Story, or SDN/ SCN memories over the years

Honestly, my memory is a bit fuzzy as to exactly when I first became aware of SDN, but I suspect it must have been at my first teched, in 2005 in Boston.In previous years, ASUG had its own fall meeting for the technology groups (as we were known back in the day), but in 2005, ASUG volunteers held forth and led networking sessions in our first ASUG lounge at TechEd. That lounge was way, waaay up in the sky-high nosebleed section of the convention center in Boston, while below us swirled a sea of humanity who all seemed to know one another from somewhere else. That somewhere else was SDN, but to be honest, it didn’t seem to offer much to me, as I was a security analyst, not a developer, and I was a customer, whereas the majority seemed to be consultants.

Still, I was intrigued enough with it all to submit an abstract via ASUG the next year, and TechEd 2006 was my first time to speak at a TechEd. What a nightmare it was! There were several hecklers in my audience who were unexpectedly (in comparison to my years of speaking as ASUG events) rude and disruptive; I shook it off over some tall, cold beverages but swore off speaking at TechEds ever again. Who needed that stress? – certainly not me, as I had plenty keeping me busy holding multiple volunteer roles within ASUG on top of my day job.

Being invited to be in the charter class of SAP Mentors brought me into the fold of SDN, and I soon made friends outside my circle of ASUG colleagues.  It still seemed very developer-centric to me, but I started taking notice of people and activities in the larger community and slowly started to participate.

When I became aware of the fledgling BPX Community was when I first felt like there was a home for me. The mural created at SAP TechEd 2007, which was used to illustrate the cover of Process First: the evolution of the Business Process Expert,

showed the larger SAP ecosystem, including SDN, BPX, ASUG, and more, all interconnected, and it made a powerful statement. 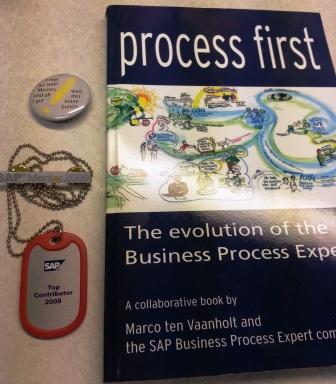 Another important memory was the Process Design Slam event at #TechEd2009 in Phoenix. I had written it off as too far out of my areas of expertise, but Marilyn Pratt  encouraged me to attend, and I surprised myself at having something to contribute to the conversations. As far as I am concerned, Marilyn is the living, breathing embodiment of inclusiveness, and she is one of the key drivers of any successes I have had on SCN. It was she who encouraged me to start blogging on SCN; I had my doubts that anyone would be interested in anything I had to say, but she and my longtime ASUG volunteer colleague and almost-twin friend Jim Spath mentored me, and before long I found my voice on SCN.

Eventually I got past that first awful experience, and I have been speaking again at TechEd yearly since 2010 to report progress on our (still ongoing) Security Influence Council. SCN has given me a platform to share my personal views on SAP security and GRC, my looks forward to and reports from TechEd and ASUG/SAPPHIRE, and topics of more general business interest.  The SAP Mentors has been a wonderful experience for me; I have met people from the around the world and in all corners of the SAP ecosystem, with expertise of all kinds. While it still seems to me that the developers and consultants are the strongest voices in SCN, there are customers, partners, analysts, and SAP employees who share their own unique and interesting perspectives. What I have found is that, like so many other things in life, SCN is what you make of it; there are opportunities for everyone to participate in discussions, comment on blogs, and share your own ideas as a blogger. The new gamification elements encourage me to step out of my comfort zone and try new activities, and I invite all SCN members to give something new a try and add to the tapestry of SCN history of the next 10 years and beyond.