Before we go into detail, one might ask “why combining virtual and physical cluster nodes in one cluster at all”. Fair enough. Maybe the answer “because it’s possible” is a little thin, but in our test scenario, this was exactly what we wanted to prove. Potential use cases for such a setup are:

So let’s frame the idea from bird’s-eye perspective: we’re running a high-load system on two physical nodes. During maintenance windows where we take off one node, we want to secure the running resources against unplanned downtime with a fallback node that can easily be provisioned and that doesn’t consume nor occupy resources when it’s not needed. Hence, a perfect candidate for a virtual machine. 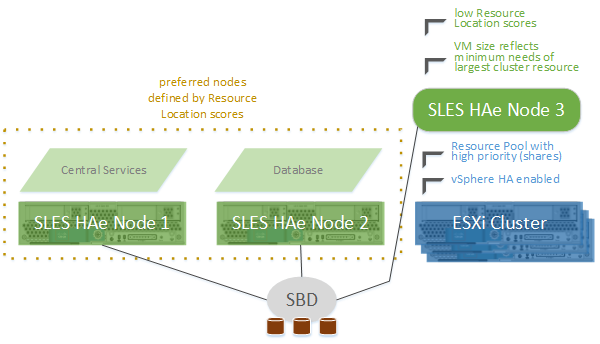 The typical fencing agent we use is SBD (aka. storage-based death, stonith block device or split-brain detector). In its configuration with three devices, it provides one of the most resilient fencing methods. With a single storage system, the SBD devices should be distributed among several physical enclosures to avoid outages of single LUNs activating the fencing mechanism. On this first example, the data volumes belonging to cluster resources are held by filer head A, therefore quorum is built on this controller.

In a setup where we have some kind of replication mechanism, we want our cluster properly decide on which nodes the resources should run after the primary, “active”, storage side is down. To avoid scenarios where the whole cluster shuts itself off because the majority of the SBD devices cannot be reached by any of the nodes, we need a mechanism which ensures a correct quorum decision. For this purpose we (mis)use a resilient part of the infrastructure, which provides the 3rd SBD device usually via iSCSI, as a tie-braker. 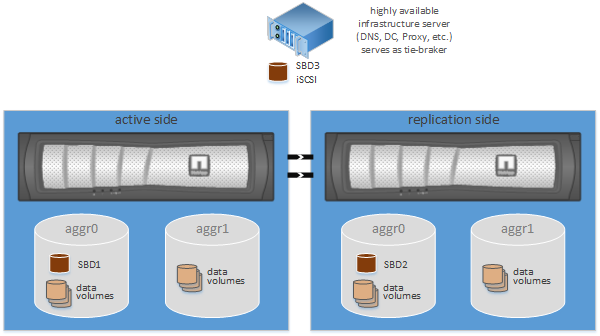 To configure storage-based fencing on a virtual node, the steps are:

Should the scenario be extended by using multiple virtual nodes in parallel, or when setting up a cluster which is completely virtual, the RDMs pointing to the SBD LUNs have to be added to each virtual node. But as VMFS usually locks a VMDK – no matter if the VMDK descriptor points to a container file or to an RDM – in order to prevent inconsistency caused by writing to the same disk from multiple virtual machines simultaneously, we manually have to un-lock the VMDK by setting the multi-writer parameter.

There are surely some spots that could have been elaborated in more detail, but as I mentioned in my previous blog, SUSE maintains a human-readable cluster manual as well as a considerable library of SAP best practices. Nevertheless, your comments are welcome!