Well, if you haven’t heard yet, Miley Cyrus put on quite the show at the 2013 MTV Video Music Awards. The VMAs is certainly getting its fair share of media attention and the social web exploded with sentiment as Miley took the stage and has continued through the night. With SAP Social Media Analytics by NetBase, you can see what all the fuss is about.

Outrageous performances are nothing new. There will always be performers that like to push the envelope and there will always be debate as to whether or not things have gone too far. Imagine if social media were around when Elvis introduced his revolutionary sound! And no, I am not comparing Hannah Montana to the King. Let’s dig into the sentiment and get an idea of what people thought of Miley’s performance. Click on the graphics to enlarge view.

Looking at the past 24 hours, we have a summary of the sentiment as well as a timeline that highlights the net sentiment. The minute Miley hit the stage, people took to social media. Miley touts a Net Sentiment score of -18% which indicates that she is basking in a negative light. The Net Sentiment line shows that Miley was generally in the positive until she performed and then her score took a nose dive.

The top terms and emotions let you see what people are associating with the topic. Clearly there are a lot of mentions referencing the VMA performance itself. There is also mention of Robin Thicke, a fellow performer with whom Miley “danced”. There is plenty of Miley love being shared when looking at emotions but then there is some hate and ugliness as well. There are those that believe that Miley is being victimized and there are those that ask that she simply stop. When you want to drill into the specific sentiment, whether it is a tweet, Facebook post, or article, it is only a click away. 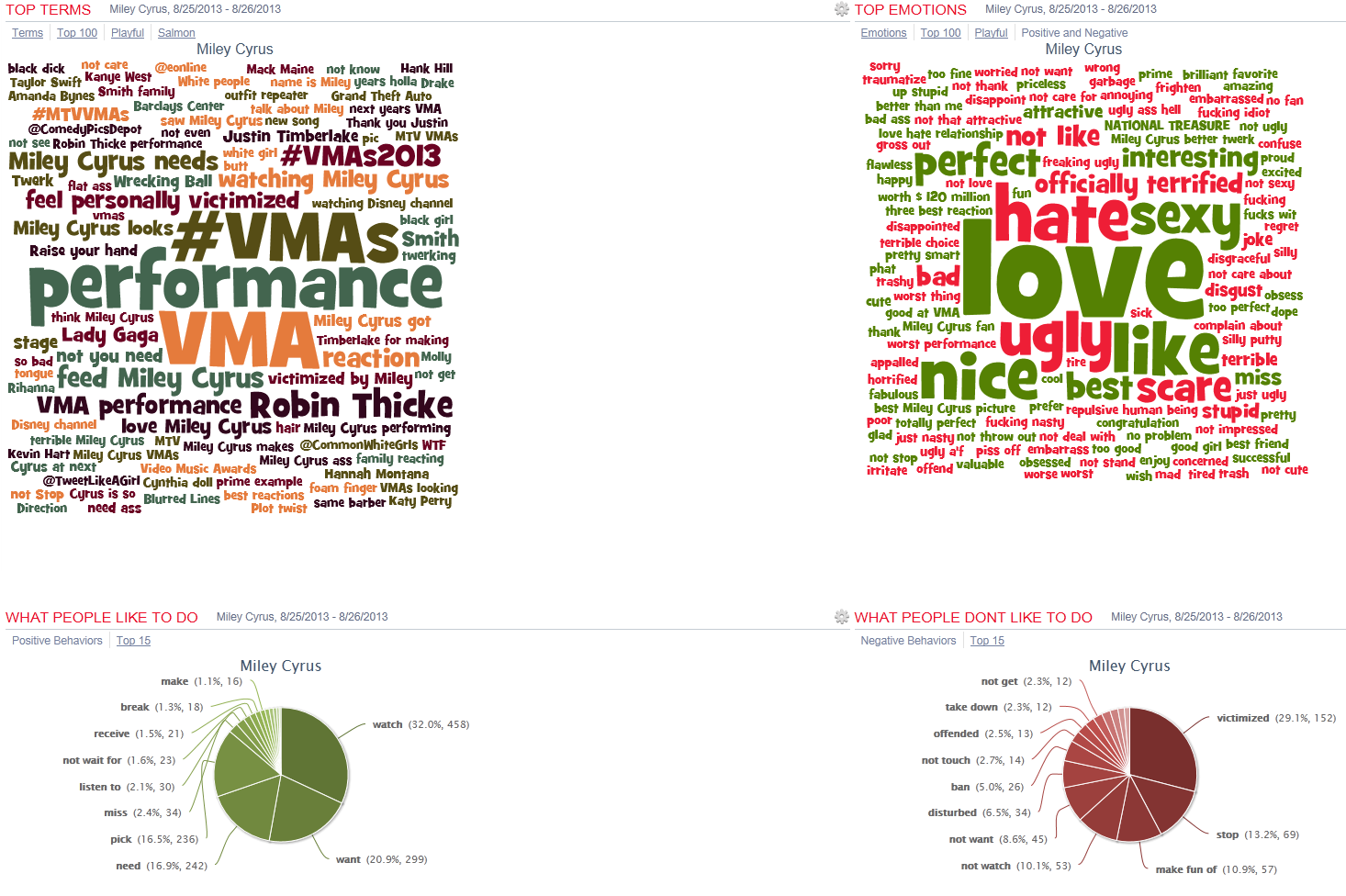 A breakdown of the authors and sources provides a wealth of information. You can look at the author with the most mentions, the authors with the most followers, and the authors with the highest influence or klout. All the news sources have been focusing on Miley, and of course entertainment blogger Perez Hilton has chimed in. The Miley conversation was taking place overwhelmingly on Twitter. Facebook posts came in a distant second. Perhaps people didn’t want to waste their time typing too much about Miley?

Miley was worse than Lady Gaga according to this viewer. Is that a good or bad thing?

Don’t worry Miley, you still have some fans.

I think Will Smith and his kids sum up Miley Cyrus’ performance perfectly with their facial expressions. I didn’t catch the fiasco live, but I sure did see the activity on my social networks. What do you think? Did Miley go too far? She certainly is getting some attention which seems like the objective the VMAs and Cyrus had in mind. She sure upstaged Lady Gaga this time around…