In Chip Rodgers’ recent blog, “10 Year Anniversary for #SCN!  (#SCNis10)”, he highlights the 10th year anniversary of SAP Community Network, and some of the activities that will take place throughout the rest of 2013 to celebrate. Now that the plans are refined, we’re sharing the specifics so that you won’t miss out on the fun!

Each week, leading up to a big celebration at SAP TechEd Las Vegas, there are activities planned for the Community, by its members, for its members. Here are the highlights:

Longtime members are sharing their experiences over the years in milestone video blogs that will be posted both in SCN and on the SAP Facebook timeline. Check out the 2003, 2004 , 2005 and 2006 milestone posts. 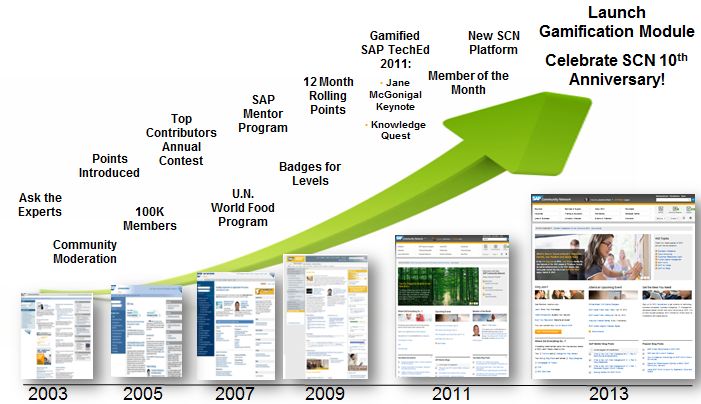 There are two missions that you can complete related to #SCNis10. Blog about your experiences with SCN and how it has influenced your career (and maybe your life) in the “SCN and Me” challenge. Contributors will receive this special badge, as well as an extra 5 points in addition to the usual 10 for a blog. But make these blogs good ones. We will be checking to insure that entries qualify as blogs. Including a video in the blog is a big plus. Winners of the best blogs will be highlighted at SAP TechEd Las Vegas.

The second mission is the “Real Founder of SCN” poll, where you can vote for your favorite founder of SCN.  Now we all know that Shai Agassi was probably inarguably the true founder back in 2003. But just for fun, we’ve asked some of the key players to tell us why they should be known as the original founder. Watch the interesting video submissions from Shay Barry, Craig Cmehil, Mark Finnern, Etay Gafni, Marilyn Pratt, and Jeff Word, and vote for your favorite. You will receive this badge and 1 point for voicing your opinion. The “founder” with the most votes will be announced at SAP TechEd Las Vegas.

We plan to have a physical representation of SCN, past, present and future, in the clubhouse at TechEd this year. If you attend, this will be a “must see”, with rolling videos of key milestones from the past and present. There will also be an area where you can make your mark about what SCN could be in the future.

Also, watch for party activities at key TechEd events like balloons, streamers, and maybe even birthday cake to commemorate this important milestone for the Community.

Thank you to those of you who have already contributed to the celebration, as well as those of you who are committed to participate in the near future. Here is the lineup of activities week by week:

Thanks for providing this easy reference guide to the celebration blogs.

I also particularly enjoyed reading the first new entries to the

“SCN and Me” challenge.

Looking forward to the upcoming publications and catching up with those already out there.  Loved openning up Chip Rodgers ' link to

original SDN on the Wayback Machine from July of 2003. Awesome! (also see there is a reference to the welcome message to SDN from Shai Agassi although recording is no longer available).

Will check back to your blog to remind myself of upcoming posts.

Thanks for this quick guide.

I am already excited to attend the celebrations at TechEd Bangalore!

We all are excited and waiting to attend Teched in Bangalore.

Nice blog post Jeanne! And I like the subtle "to do" list in the table 😉
I am very proud of being part of such a vibrant, professional, serious - and also fun - community.

I'm just reading up on all the scnis10 blog posts but in somewhat reverse order. Now reading this blog post of yours the penny dropped!

It's a great initiative and a fine example of how gamification enables specific challenges and missions, which give the whole platform a boost!

I can't wait to join the celebration at sapteched_2013 Amsterdam!

SCN has been helpful in getting to know about SAP features, especially for people  starting new into SAP. The new features of SCN makes it even more interesting to use!

I shall be happy to share on Dec 9 at TechEd Bangalore my first brush with SDN in later part of 2006 and attending my first ever SDN event - Community Day 2007 where I met Craig, Mark Finnern, Marilyn, Gali and Gregor Wolf. NOTE I mentioned SDN as it was known those days.

PS: We are planning to have SCNis10 celebration session at SIT Bangalore on Nov 17th

You put the awesome thoughts out here.

We really feels great to be part of SCN 😳 , which gives us awesome ways to share our thoughts & exchange our views.

Congratulation for 10th Anniversary of SCN Community .. Its my pleasure  to be part of SAP ...

Thanks everyone for your feedback and comments!  I'm looking forward to seeing some of you at TechEds this year. I'll be in Vegas, Amsterdam and Bangalore!

For those of you who can't make it. We can still meet virtually!

Great, looking forward to it