Let me set the scene:

Here’s a little snapshot from the cover page of the original business plan: 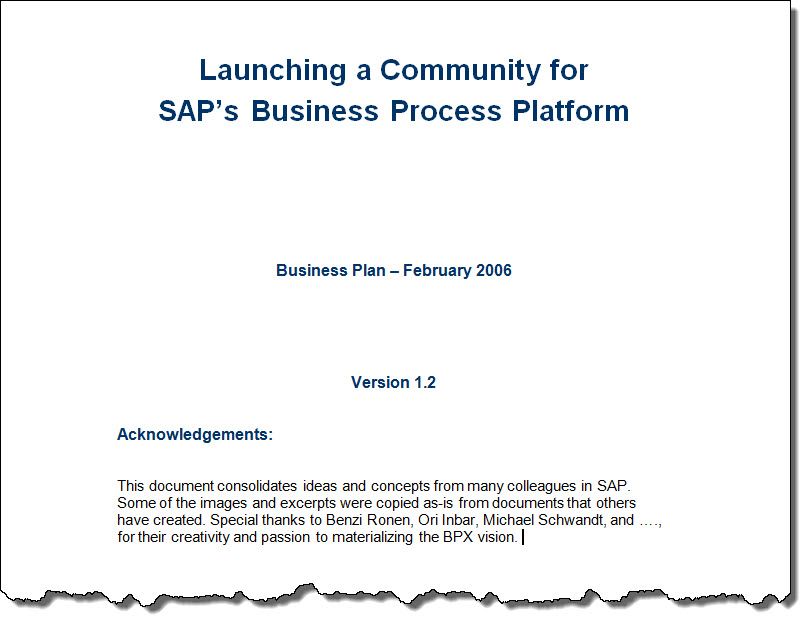 What was this BPX they were talking about? Well, SAP and Shai Agassi had the vision of SAP NetWeaver as the platform to help businesses take advantage of enterprise services with robust business and industry content built into the platform. Using this business process platform, companies that had relied on software developers alone to solve their business problems with customized applications and extensive technology integration could turn to an additional resource in their organization – the Business Process Expert (BPX) – who could effect strategic changes.

And here’s an early visualization of the business process expert role: 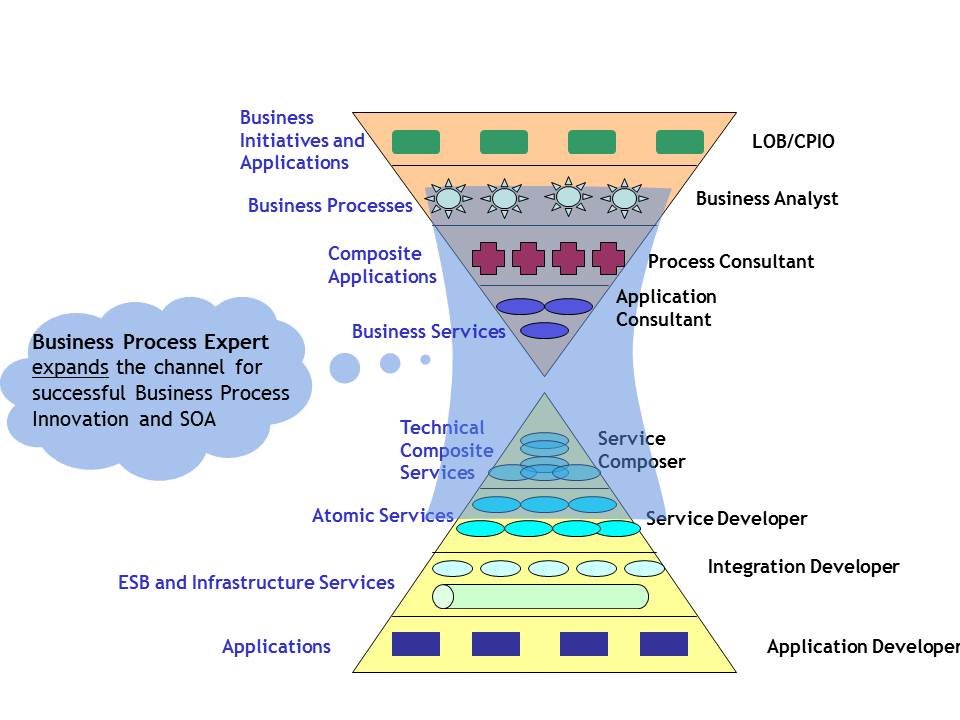 So it was February of 2006, and the target launch date for this new online sister community to SDN was mid-May, in time for the annual SAPPHIRE event. We had all of three months to put this together!

Joining me in the launch team and bringing her extensive SAP technical and business-oriented background along (as she describes in her #SCNIs10 anniversary blog) was Marilyn Pratt. We recruited some SAP consultants with deep process knowledge to help us seed the business-oriented content for the community: BI expert Helen Sunderland and Charlie McMaster, whose background was Supply Chain Management.

While Marilyn concentrated on finding business process expert bloggers and others who could fuel discussions, Christine Merten  and I put together the information architecture for the community, and I set about collecting content like white papers and other publications. Our designer Jodi Fleischman worked on the visual design of the new community along with Alys Longworth, and Aleksandra Swerdlow poured blood, sweat, and tears into the production of the community webpages. During this time, Marco ten Vaanholt also joined the project.

Finally, on May 13, 2006, the Business Process Expert Community had our soft launch, with our then-new VP, Mark Yolton, quietly publishing a blog about it. Marilyn started one of the first discussions about the new community – Who Is a BPX? – which received a lot of feedback!

But it wasn’t until September 8, a week before SAP TechEd Las Vegas that year, that the community was ready to make a splash on the scene. In the months since the soft launch, we had brought our first industry area – Consumer Products – on board, with the help of Frauke Hassdenteufel.

Here is that official launch homepage from that fateful day in September 2006 (click on the image to see a larger version): 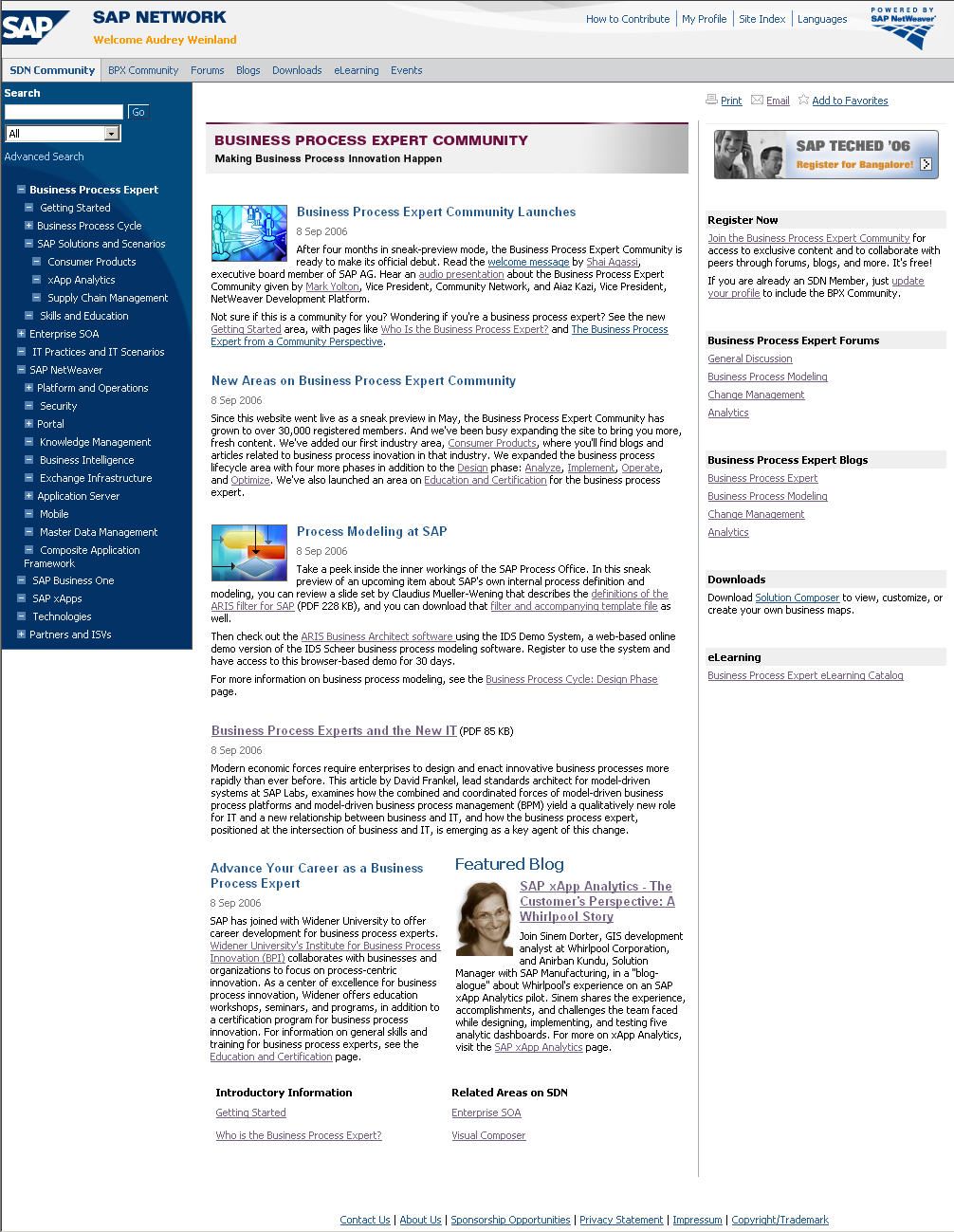 And here I was at SAP TechEd introducing the community live and in person (credit to Marilyn Pratt for the photo): 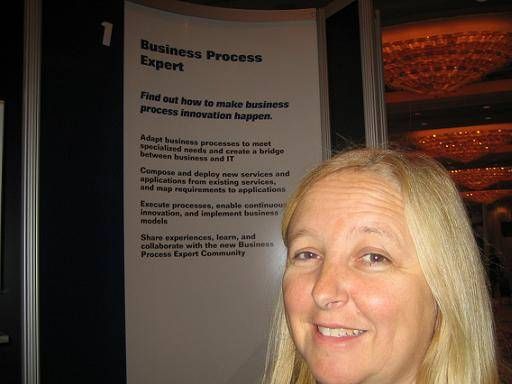 SAP released its SAP Business Process Management software in 2008 (now part of SAP Process Orchestration), and the BPX Community went on to bring more and better business-oriented content to the SDN community as the years went by, eventually moving out from under SDN to stand beside it as a full sibling. Under the parent umbrella of (newly coined) SAP Community Network, or SCN, the BPX Community continued to develop, but its mission remained unchanged: bridge the gap between business and IT, help the geeks and the suits talk to each other and come together to drive business innovation in companies everywhere.

Here is another snapshot from 2009 (click on the image to see a larger version): If you’re new to SCN, you’re probably wondering just about now: So what happened to that community? Where is the Business Process Expert Community now?

By 2012, SAP Community Network comprised three communities: SDN, BPX, and BOC  (the BusinessObjects Community, for data analysts). As we were preparing to move to a new platform, Jive, we saw a golden opportunity to bring technology, business process, and data analytics closer together again. Instead of two (or three) separate camps, we needed to make it easier to share information and tighten the sense of community between the techies, the suits, and the data analysts.

So we pulled all three communities back together into the single, overarching structure, the SAP Community Network. This is the SCN you now know and love. The SCN homepage highlights content from all corners of the community, with a diversity of voices and an interesting mixture of viewpoints. The new SCN is inclusive, and that inclusion of diverse viewpoints continually adds to the ongoing vibrancy of the site. Now it’s 2013, SCN is 10!!, and I can only feel that the best is yet to come. The community continues to evolve and grow. Together with Laure Cetin, Sean Yang, and Oliver Kohl, I helped launch advanced game mechanics on the site, which have added an element of fun and better ways to earn and show reputation. New missions like this one, “SCN and Me”, keep things interesting!

Who knows what lies around the corner? Will we still use computers in 2023? Will I type my 20-year SCN reunion blog by simply muttering it in the general direction of my smartphone or eyewear (or whatever device is hip then)? More importantly, will I be able to auction off my BPX t-shirt and live comfortably off the proceeds? 😉

I can’t wait to find out!

What’s your vision of the future of SCN?