I have analyzed the census of most developing and emerging BRICS countries.

BRICS is the acronym for an association of five major emerging national economies: Brazil, Russia, India, China and South Africa.

As of 2013, the five BRICS countries represent almost 3 billion people i.e. more than 40% of world population, with a combined nominal GDP of US$14.8 trillion, and an estimated US$4 trillion in combined foreign reserves.

Every country needs basic information on its residents for purposes of planning, development and improvement of the resident’s quality of life. Good planning is based on reliable, up-to-date, accurate and detailed information on the state of the society in the country. This information makes it possible to plan better services, improve the quality of life and solve existing problems of BRICS countries.

I have used the data set from the below World Bank site for analyzing BRICS gender statistics:

The rationale is to gather information about the general population, in order to present a full and reliable picture of the population in the country. I have divided the population into five groups as population between 0-14, 15-64, 65 and above age groups for both males and females.

The main purpose of population census is to collect data and production of information for government ministries and local authorities, for budgeting purposes. The below chart represents the population of BRICS countries. I took country name as dimension and last 5 year’s population as measure. 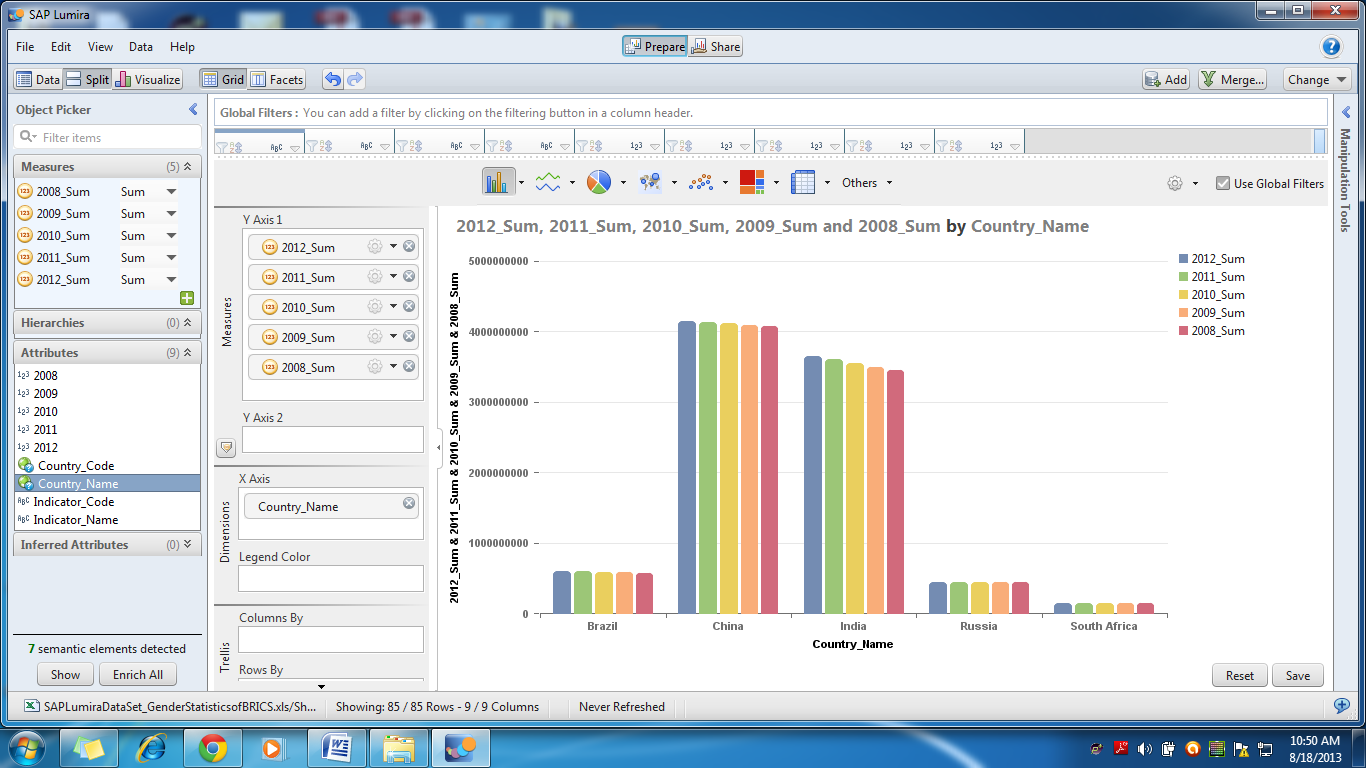 The same is represented as 3d column chart 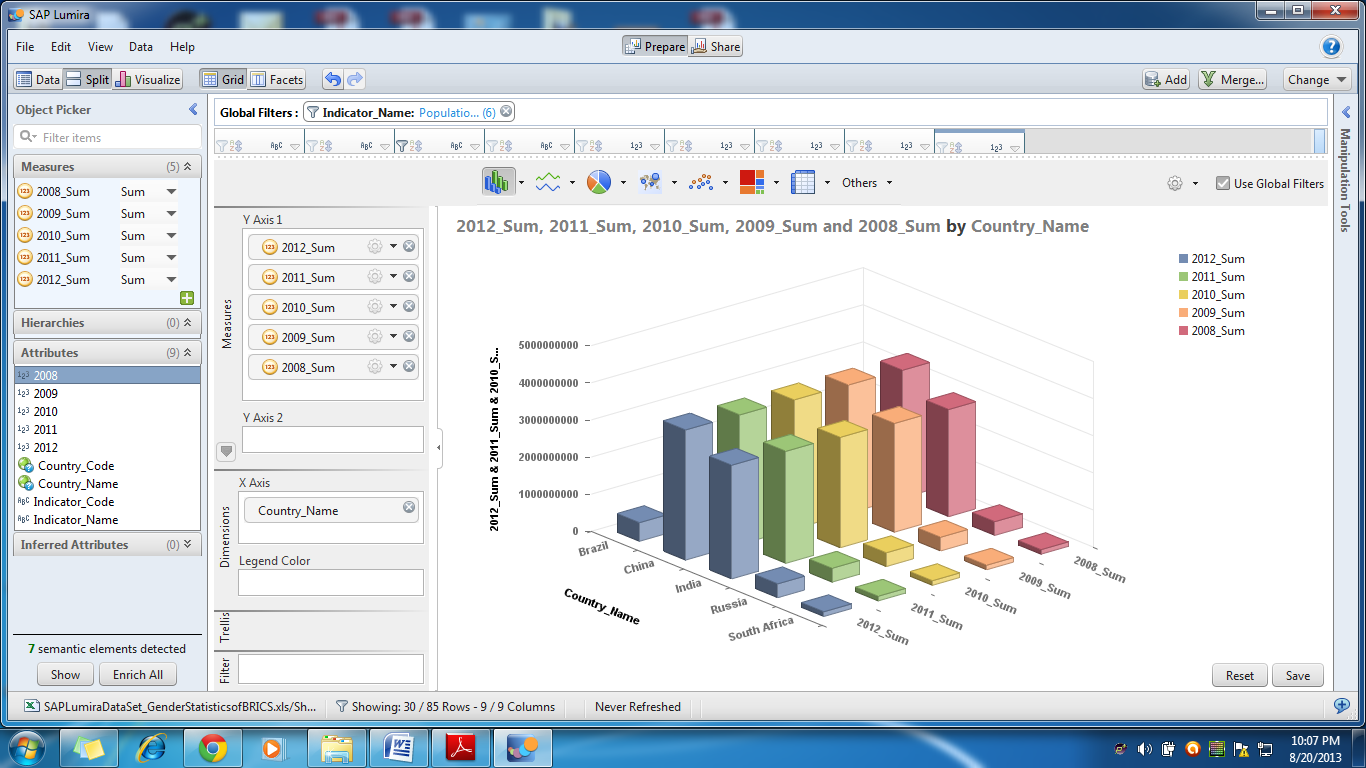 The below is the geographic representation for the last year’s population of BRICS. 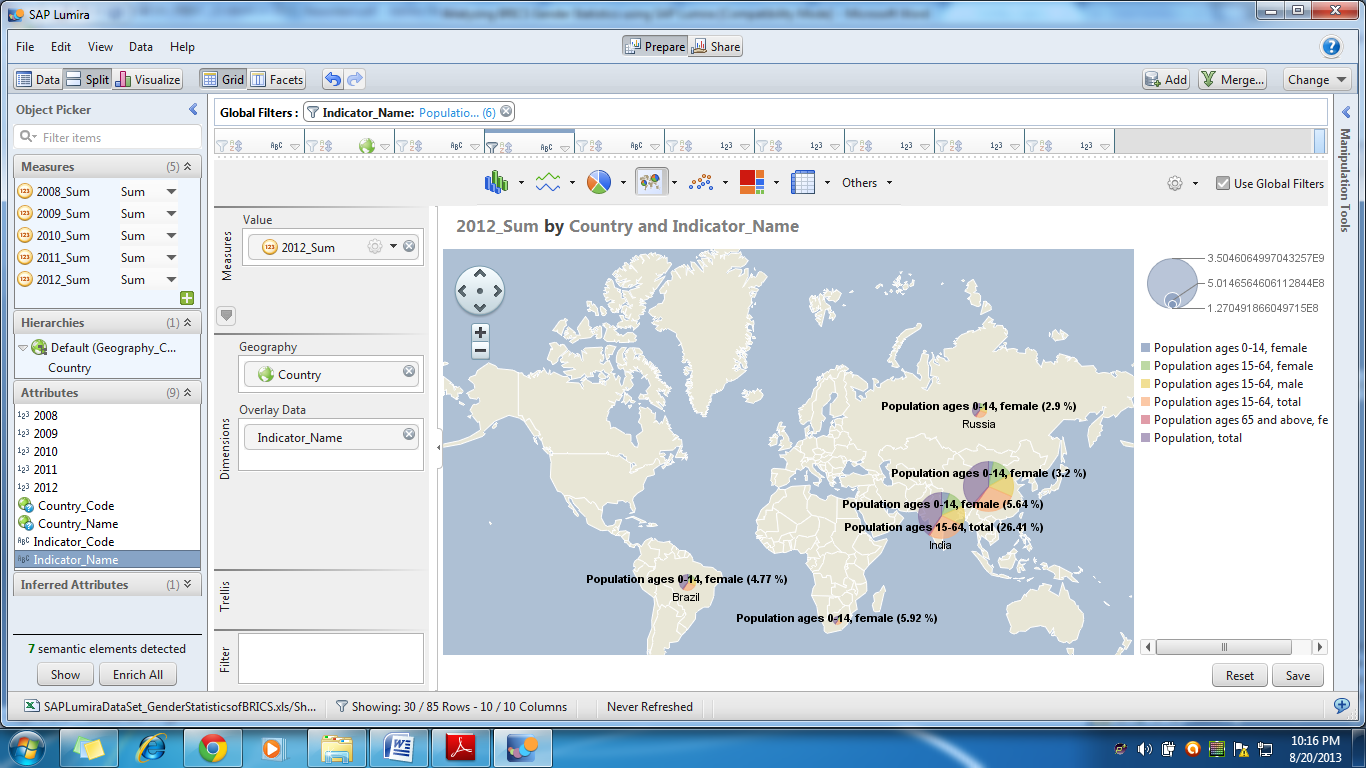 Total fertility rate (TFR) represents the number of children that would be born to a woman if she were to live to the end of her childbearing years and bear children in accordance with current age-specific fertility rates. The number, which ranges from more than 7 children per woman in developing countries in Africa to around 1 child per woman in Eastern European and highly-developed Asian countries.

The below is the fertility rate of BRICS countries represented in the form of Tag cloud chart. Here I took country name as dimensions and previous year data as measure. 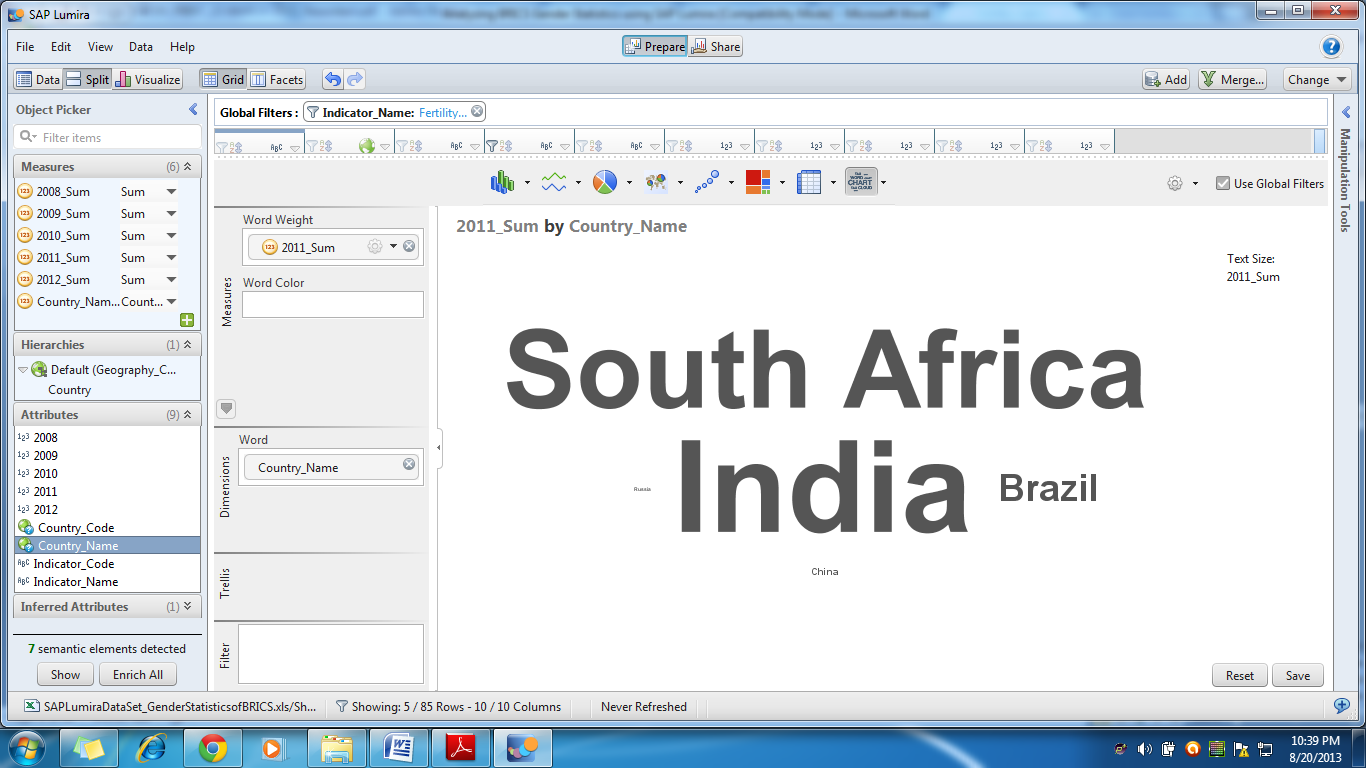 The same is represented in the form of pie chart. 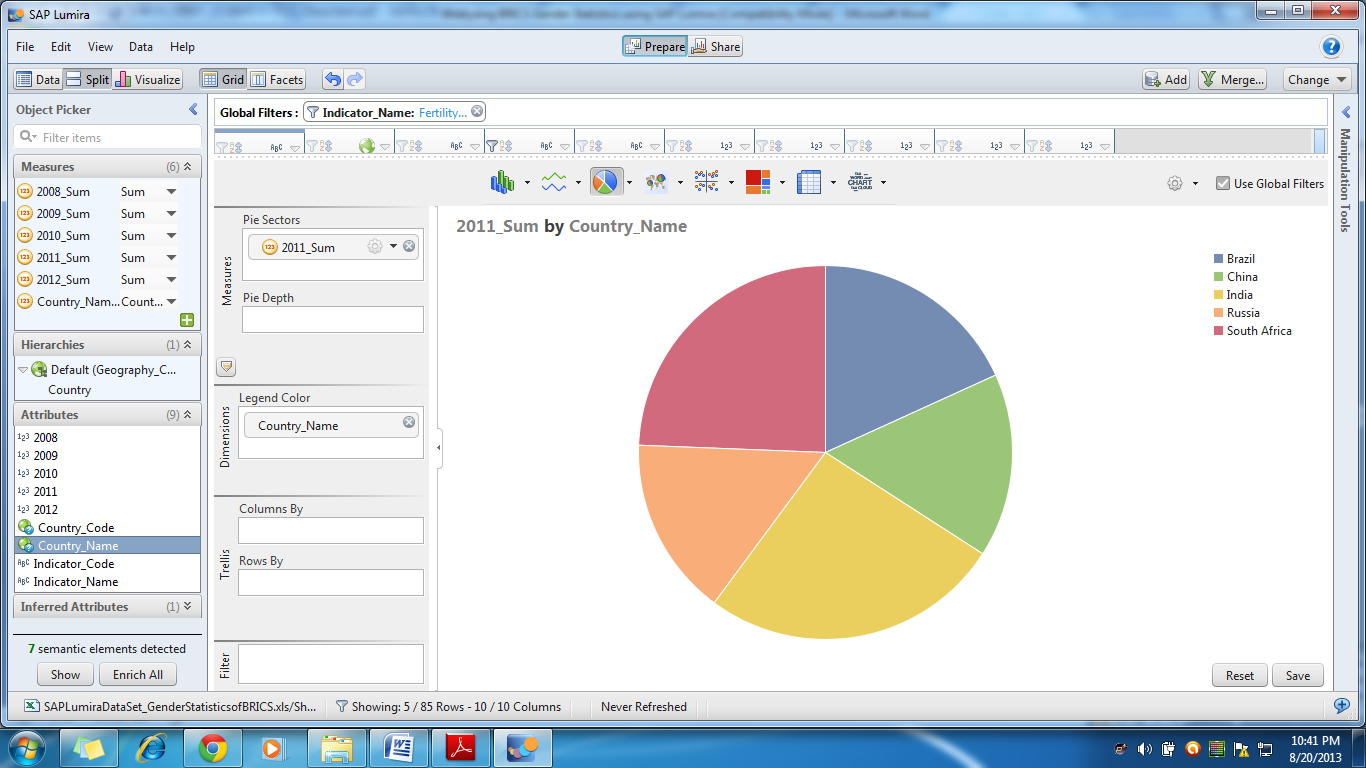 The below is the geographic visualization of fertility rates of BRICS countries. For the below graph I took country name and indicators as dimension and last year data as measure. 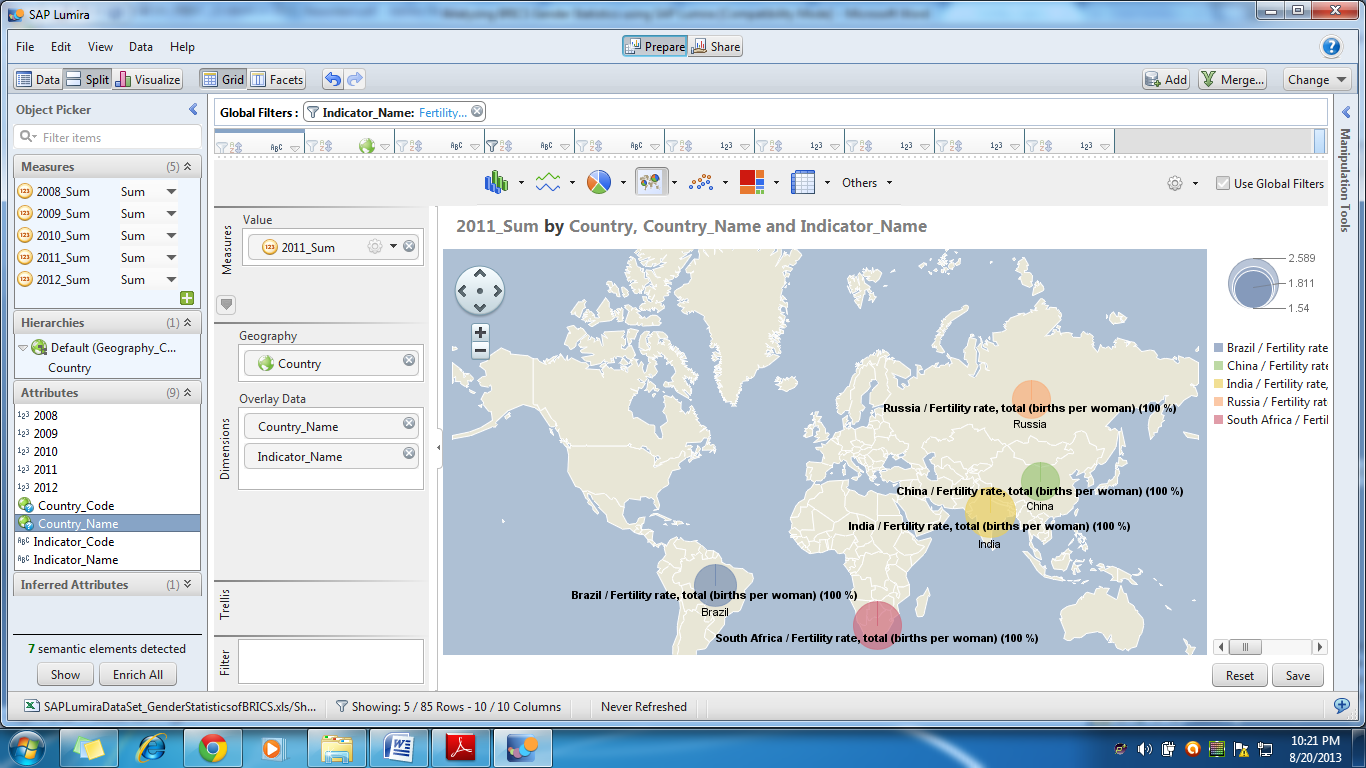 Life Expectancy shows the average number of years to be lived by a group of people born in the same year, if mortality at each age remains constant in the future.  Life expectancy is one of the factors in measuring the Human Development Index (HDI) of each nation, along with adult literacy, education, and standard of living. It is also used in describing the physical quality of life of an area.

The below is the area chart representing birth rate, death rate and life expectancy for the last two years. 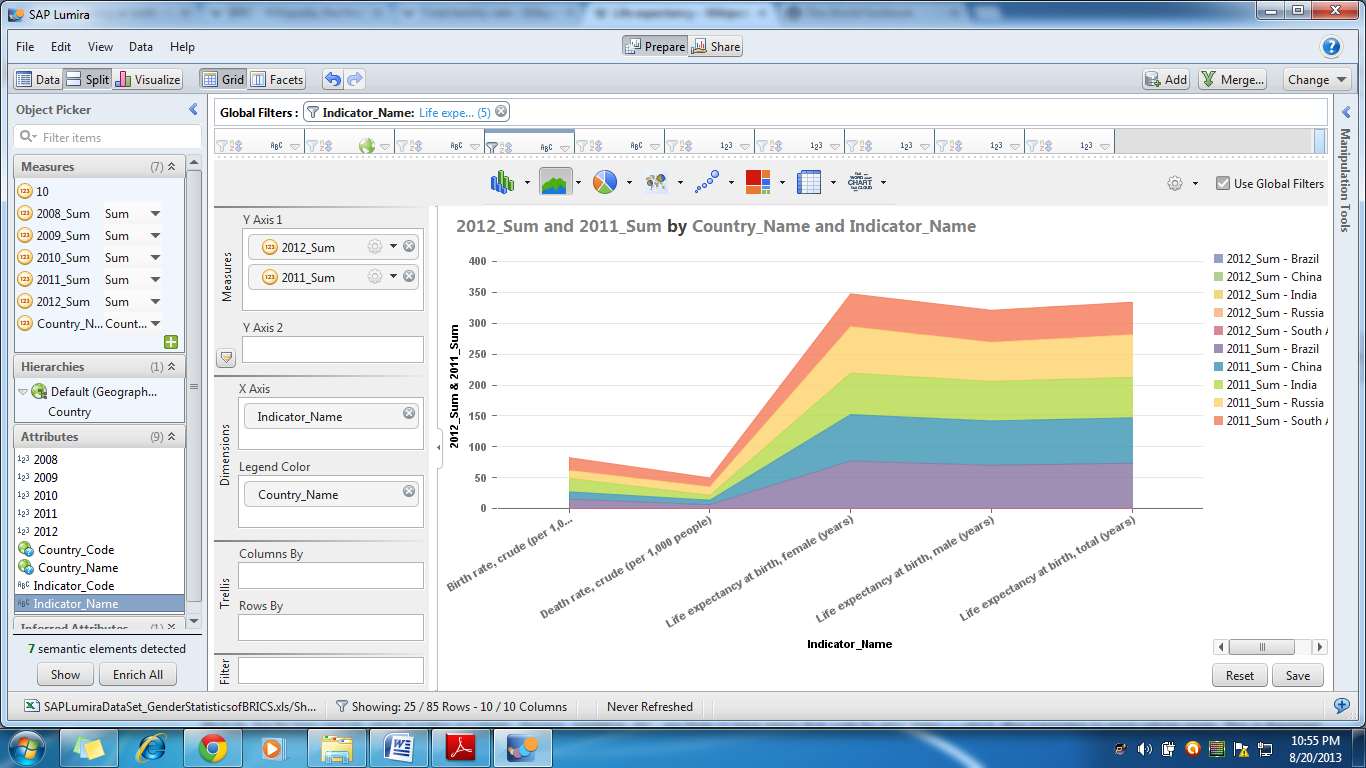 The below is the tree map chart representing birth rate, death rate and life expectancy for the last year. 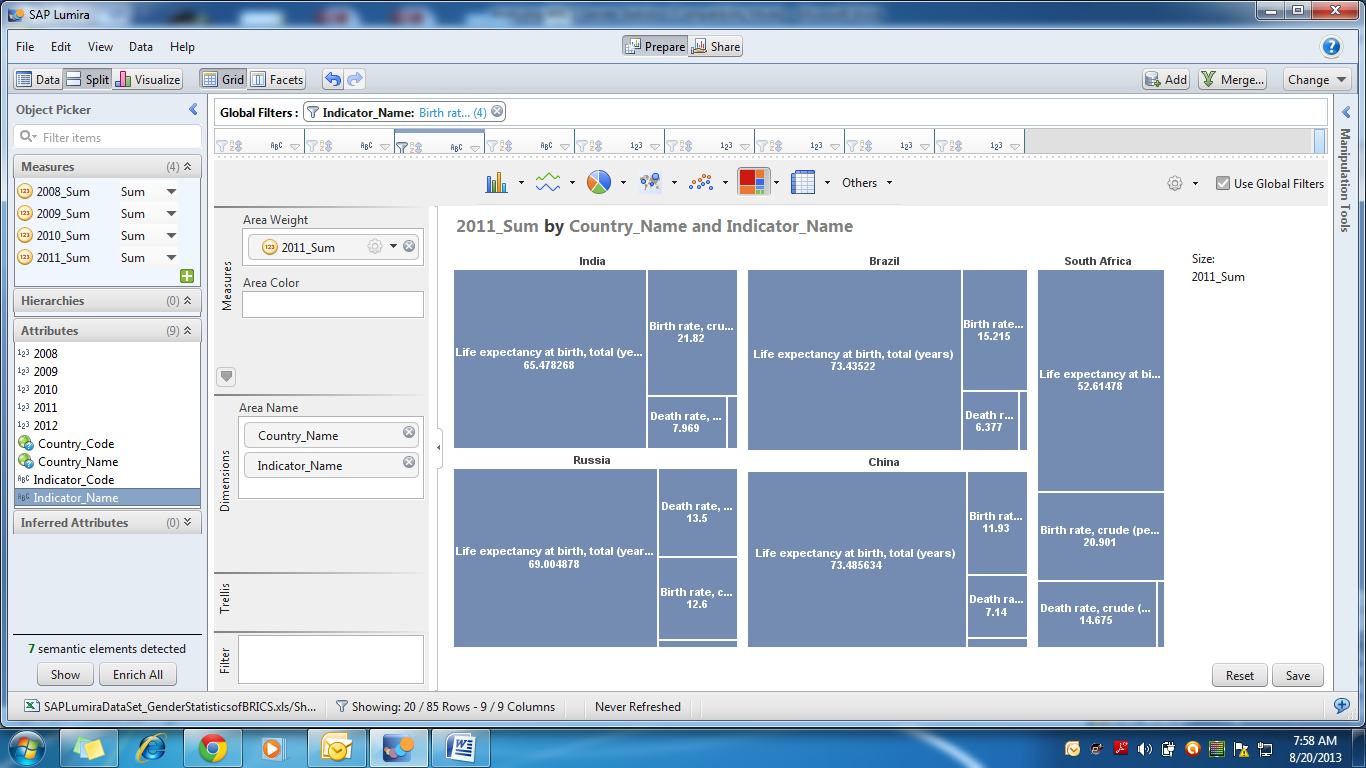 Population growth of India and china are very high it must influence their development activities so they must take measures to control the population. The fertility rate of India and South Africa seems to be average global total fertility rate (TFR) so they must plan to maintain the same rate for the coming years and at the same time TFR for Russia is very less it should take steps to increase the rate gradually for the next coming years. The crude birth rate of India and South Africa are very high they should have to take immediate steps to control the birth rate. Life expectancy rate of South Africa is very less when comparing with other BRIC countries they needs to ensure by making investments in the full range of health and well being policies. It has to support early years, education, employment and income are most important in determining long term health outcomes.

SAP Lumira’s gives excellent analysis which helps BRICS countries can make it possible to plan and provide better services according to the needs of the population which will improve the overall development of the nations.