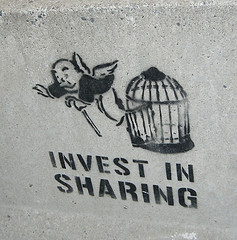 When you grew up I am sure that you were taught to share your toys with your siblings and your friends. It is certainly a value to that I am keen to instil into my children.

When we share we get access to what we could not have done ourselves. It broadens our experience and gives us exposure to things that we might not have come across ourselves.

This goes for algorithms and implementation as well as the latest kitteh movie you found on youtube.

Being exposed to a varied approaches to development can only improve our abilities as coders. A great way to be exposed to other code is to read books with code samples that are annotated and explained or blogs or open source software.

Github has become of late the goto repository for such projects. It is a great place to discover and learn and also contribute.

Having said this it is sad to hear and read about SAP’s approach to such sharing. In response to community enquiry SAP promoted Codexchange based on the SVN source control system and available to developers working on a specially licenced version of the ABAP Netweaver Stack. Codexchange has an uncertain future – it seems to be stuck and not moving forward. The answer to such a problem is simple – use github.

What is the problem with sharing our code on Github? How is it different to adding source code to a blog here on SCN or on another technical site or even in a book?

Github lowers barriers to entry and because all the hip kids hang out there it may even encourage people to get with the grey haired abap gang.

To innovate you need to change and although the ABAP language is changing and introducing new features SAP’s approach to sharing is not.

Thanks to Toban Black for the image