Technology was the real MVP during the latest Yankees home game in their new Bronx stadium, and it wasn’t just because of the ever-present yellow and blue SAP logo located above the home team’s outfield bullpen.

As the Yankees routed the Los Angeles Angels 11-3 thanks to Alfonso Soriano’s two home runs, fans in the stadium were treated to a smorgasbord of stats and baseball data from all sides via electronic boards and displays. These weren’t just the usual stats one sees at baseballs games, such as runs, strikes, balls, errors and outs.

The Yankees have embraced the latest stat analysis technology, so fans could see each team’s entire batting order, as well as each player’s batting average — at all times. When a player was up to bat, fans could see his:

There were also fun facts about each player. For example, Alex Rodriguez is one of three players of all time with 600 home runs and 300 stolen bases, joining the likes of Barry Bonds and Willie Mays.

A different electronic board in the outfield featured a display of stats for the opposing team’s pitcher, including some stats that weren’t even around 20 years ago, such as:

This is all in addition to the scores from other ball games around the league, divided into their respective American and National League sections. Fans saw those on electronic boards with the scores, the numbers of the starting pitchers, the current inning and the amount of outs — designated with little electric red dots — all in real time.

And of course, who could forget the fan favorite and the source for most of the fan involvement, the always enjoyable Jumbotron? With this board — by far the largest of the Yankees’ electronic displays — fans could see themselves pop up on screen when they least expected it.

They were also able to participate in various contests and answer trivia questions to win prizes throughout the entire night. There were even special offers given to random fans, as well as a hilarious group Spanish lesson to help fans learn words in a language that many of their favorite players already speak fluently.

Yes, technology in baseball has come a long way since the days when some old guy would replace numbers on a big board when a team scored. That element is still very romantic to the game — and several markets still use it — but new data analysis technology from companies such as SAP have changed baseball and the fan experience forever.

Players’ stats are on display at every moment of the game, enhancing baseball for the coaches, fans and administrators alike. And of course, as SAP has promised, this is just the beginning, with all of this technology moving to mobile devices too.

One thing is for sure: Rooting for the home team has never been this enhanced, easy or fun. 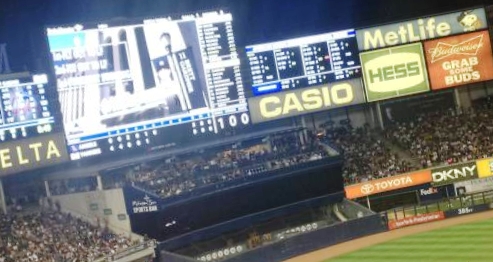