This blog is laying around on my hard drive for too much time. The previous version of this blog series was published over a year ago!. Originally named “Load test Web Dynpro Java with jMeter” this was actually the 1st blog of the 3 part series. During the last year, a few blogs about jMeter were published, but as I do not want to leave the series unfinished, I am publishing now (finally) the last part of my load test your web application blog.

To make it easier a jMeter test plan is attached to this blog. This plan can be used in conjunction with a WDJ application. Both were used for the creation of this blog.

JMeter is a great tool for testing your web applications. And you can even use it to test Web Dynpro Java applications. To facilitate the work of creating the tests, jMeter comes with a proxy to intercept browser requests and add them to the test. This allows for easy and fast recording of tests. 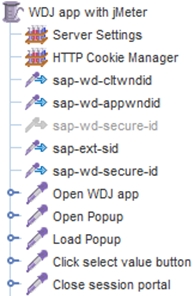 As by default a WDJ application is accessible as anonymous – or Guest – user, authentication is not needed and a test can be executed several times against the WDJ application. Pretty easy but in real life you’ll hit real soon a hard limit. By default ,the HTTP Cookie Manager controller does not delete cookies with each iteration, or: JSESSIONID is not deleted.

Running the test and checking the user sessions in NWA shows that the same Guest session is used.

With that you may be tempted to run the test and to see the load generated by just 1 user. But try to run the test 50 times. After some calls, jMeter shows an error when executing the open WDJ app step. 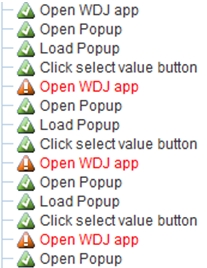 The error message returned from the server is: 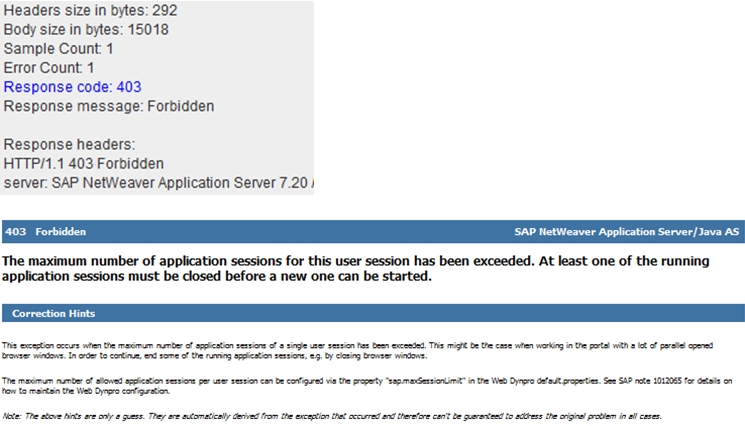 HTTP 403? Yes, 403. Re-using the same session will ensure that you`ll hit a well known limitation. You can now opt to implement SAP note 1012065, but it is better to end the session after each iteration. While only one Guest session is open, the maximum number of application sessions is exceeded: 23

Now let jMeter create a new session with each iteration.

The new sessions are created because the HTTP Cookie Manager deletes the JSESSIONID cookie with each iteration. Run the test 5 times, the open sessions in NWA will show

If now a test with 500 iterations is run, 500 Guest sessions will be created. This may not a problem, but won’t reflect your reality where sessions are ended after the user navigates away. Logging in and off creates additional load, something worth to test too. Besides this, each session occupies some memory. Depending on your test case, this amount of memory can consume quite some substantial part of the free memory, compromising your test results.

The correct way to test WDJ applications is to end the user session after the test is executed, independently if Guest or named users are used. To end the session, all it takes is to delete the cookies each iteration and trigger a logout action: /irj/portal?logout_submit=1 [you have the portal installed in the same instance, right? If not, you’ll have to add your own logoff functionality to the application]

Add this step at the end of the test.

With a HTTP sampler as the last step, each iteration can be started with a new session without overloading the NetWeaver Java server with Guest or user sessions. 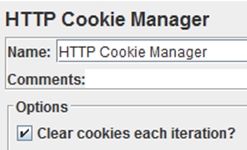 Great blog Tobias, and many thanks for pointing out the max-session-exceeded workaround!

This is something that I have hit before, and never had the time to delve in to solve, so your blog is much appreciated!

Glad you liked it.