TEARS works with a boat donation program run by U.S.-based NGO Operation Blessing International to support fishing communities in north Japan’s Miyagi prefecture, which lost more than 8,100 boats to the March 11, 2011 disaster. Fishing and aquafarming are the main sources of income in that region, and SAP has donated at least 25 boats to fishermen there since the tragedy’s first anniversary.

“When they told me I would be getting a boat,” local fisherman Hiroo Sato told SAP TV, “I was so happy, I couldn’t believe it.” During a test drive of the boat last year, Sato told Oku that he hadn’t steered a boat since the disaster.

But there is more work to be done. The tsunami and earthquake destroyed more than 120,000 Japanese homes and damaged almost 250,000 more. Total destruction was as high as US$308 billion (€231 billion); with around US$17.2 billion (€13 billion) of that in the fishing industry.

So SAP volunteers have planned another trip to the region for SAP’s month of service in October. 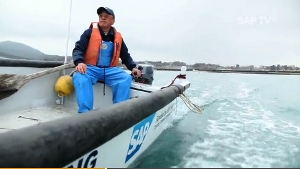