Since I needed to practice Lumira (& PA), I decided to accept the data geek challenge and have a look at some “official statistics” on government income based on our cars. The data I have used is retrieved from http://www.plan.be/databases/database_det.php?lang=nl&TM=27&IS=60&DB=TRANSP&ID=14 and I basically used 2 (out of 3 downloaded) files: 1 containing government income by tax type and 1 containing taxation by fiscal horsepower (which is based on the engine size).

As I attempted to upload the 1st file in Lumira, I immediately discovered some issues…

it seems that our first column contains information on different dimensions, so we should have multiple columns instead. Also my gut feeling was that Lumira wouldn’t be able to handle the “years” very well. In fact, this is a representation of a “restricted” measure (drilled-across by year). Sure, I could create a measure out of each column, but… that doesn’t mean anything now, does it? What had to be done was “transpose” the year information to row level. So I did… in Excel. Now my data became usefull in Lumira: 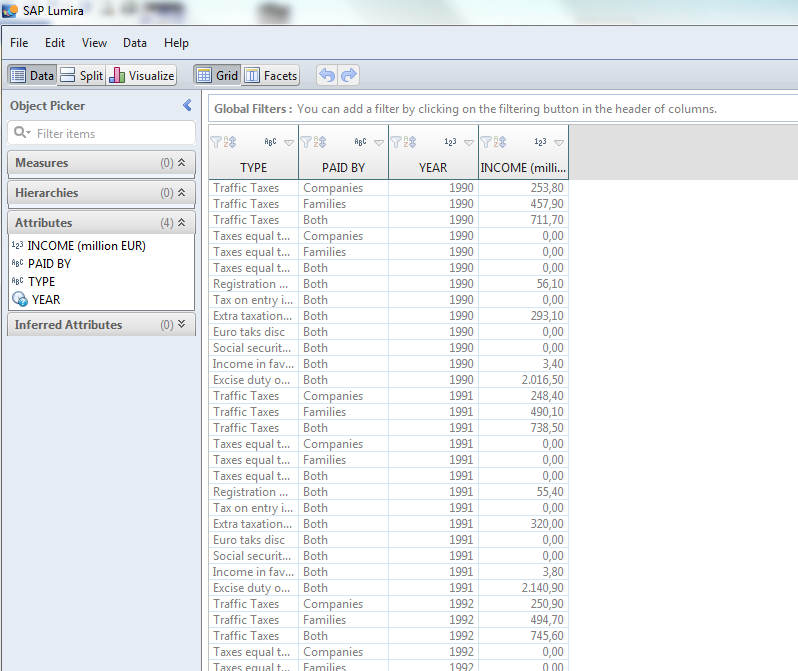 “Game time”! First of all I created a measure out of the INCOME column: 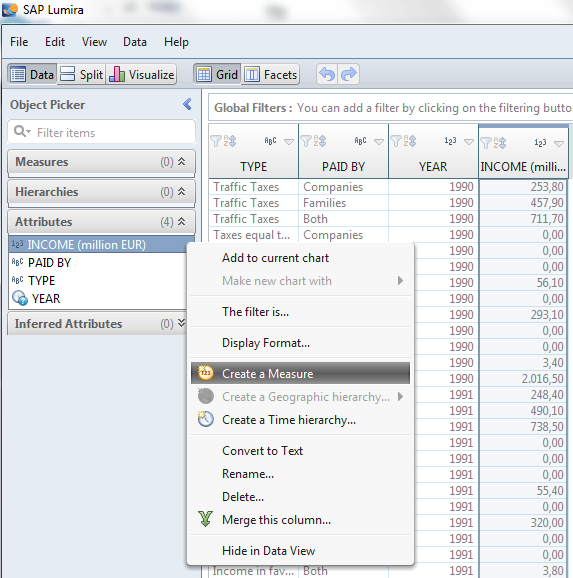 then I was ready for a first chart. This chart actually triggered a little bell… this could be used for PA as well (will be another blog post I guess). Time to upload the other file into Lumira and plot it in a chart: 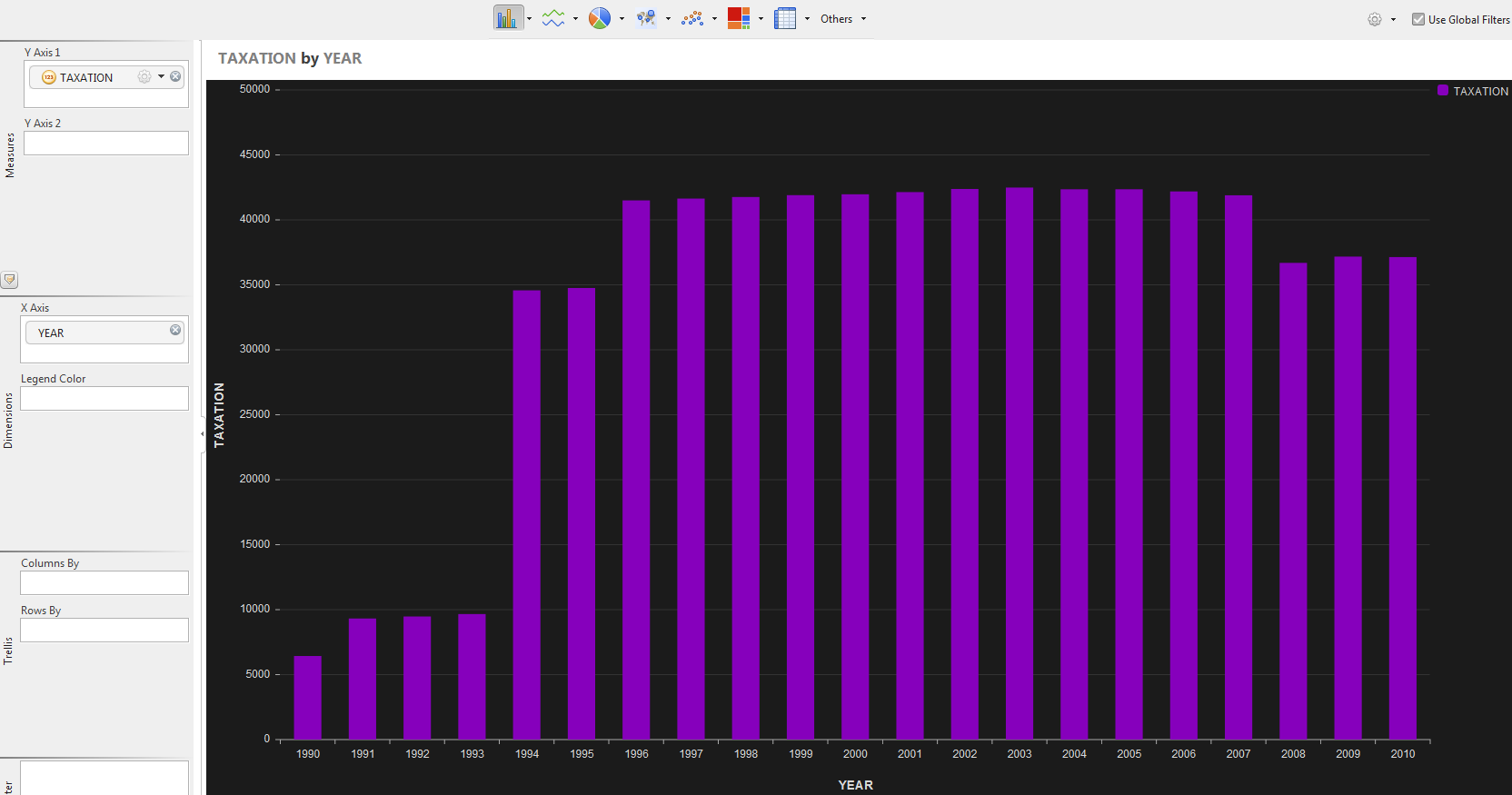 We notice a “drop” in the last 3 years… but is it really positive for us inhabitants? Let’s take a look at the different tax types in the last 10 years: 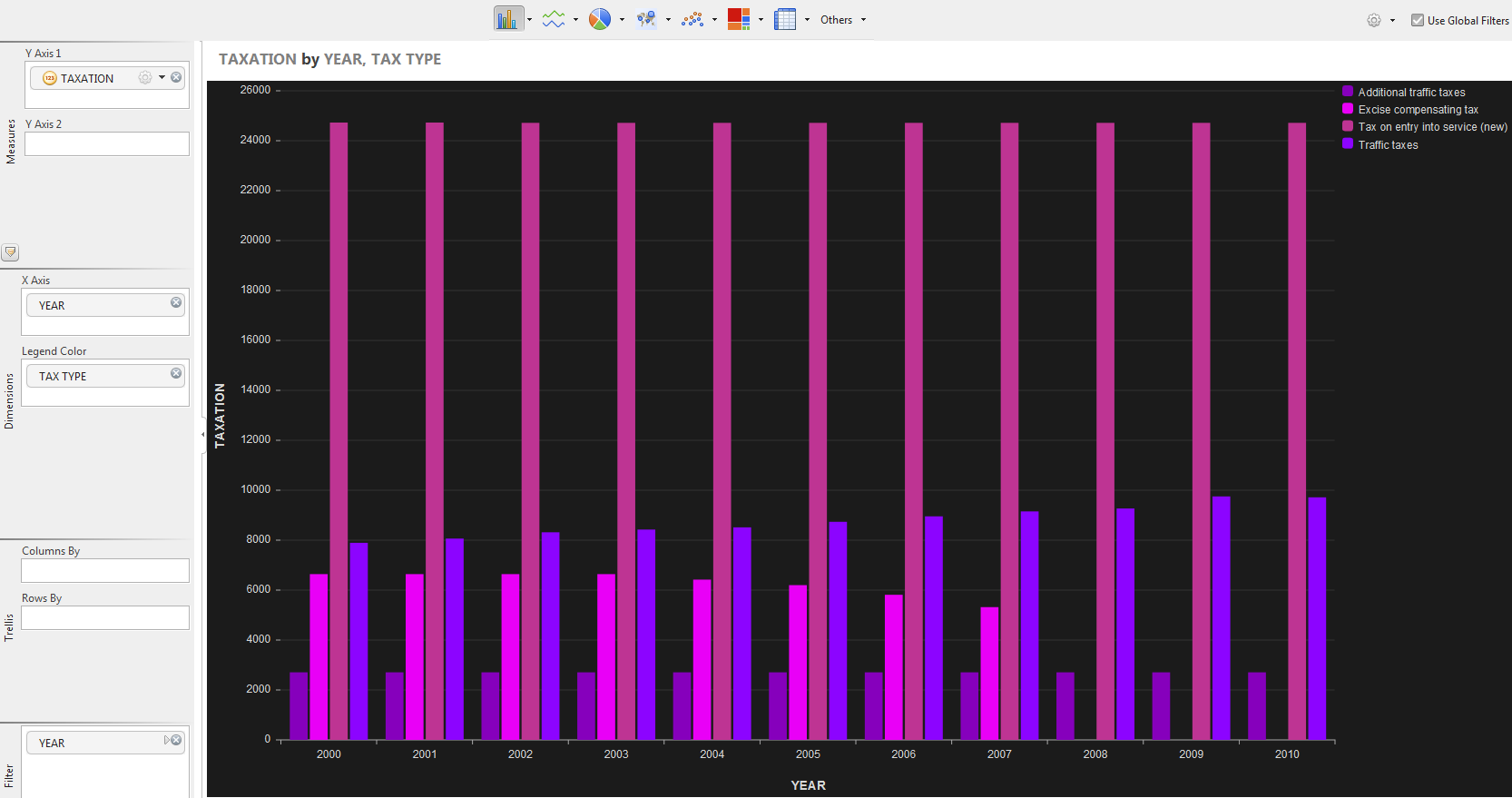 We can clearly see that the traffic taxes are still increasing, but that the excise compensating tax has disappeared.

So, how did our government deal with that “loss” in excise compensating tax? Let’s look back at our initial data set (for the last 10
years). 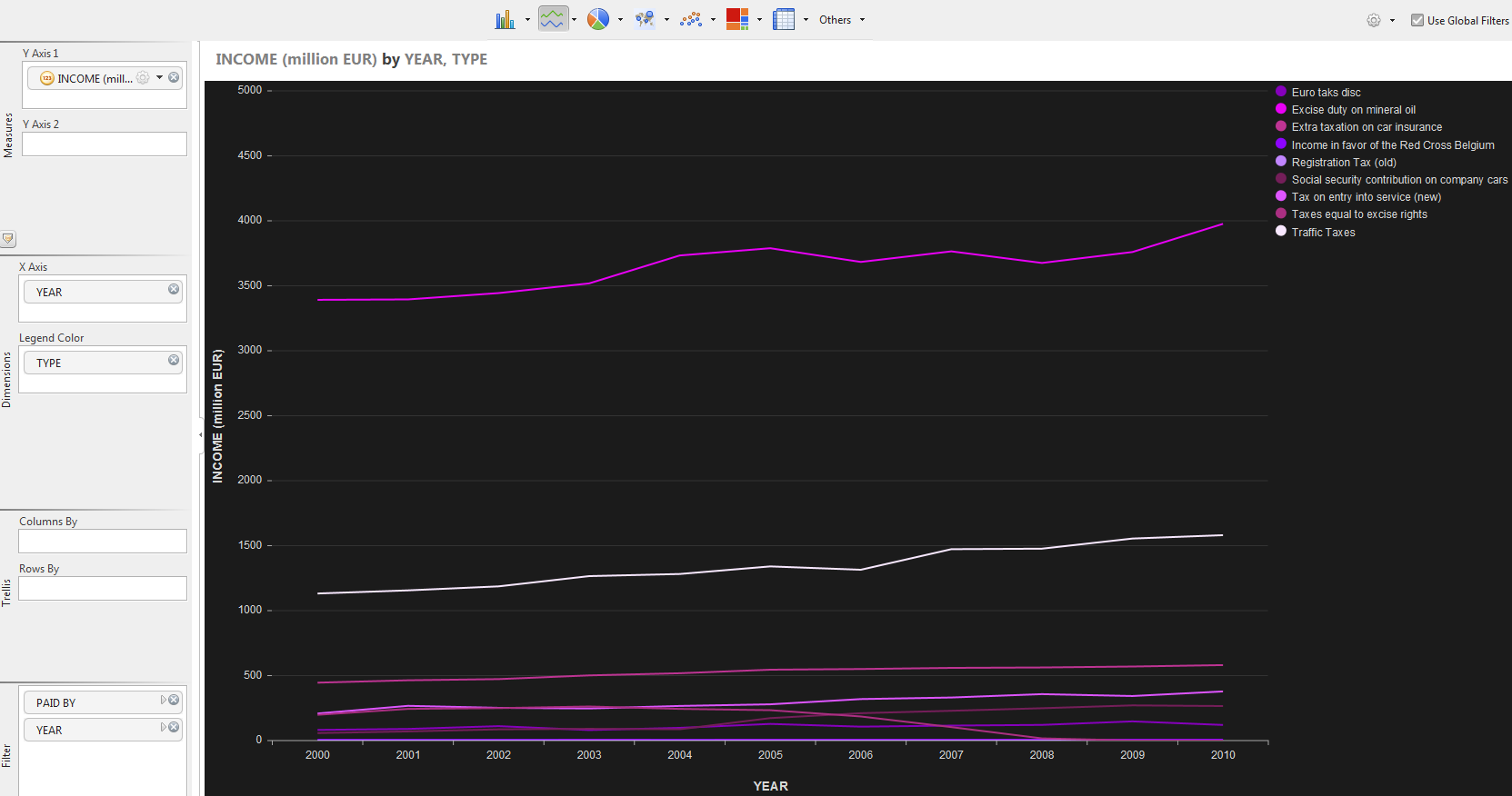 Indeed, the taxes equal to excise rights have “dropped” (nearly) to zero in the last 3 years, but… there are a couple of increases as
well! By playing around with filters on a couple of tax types, I finally kept this chart: 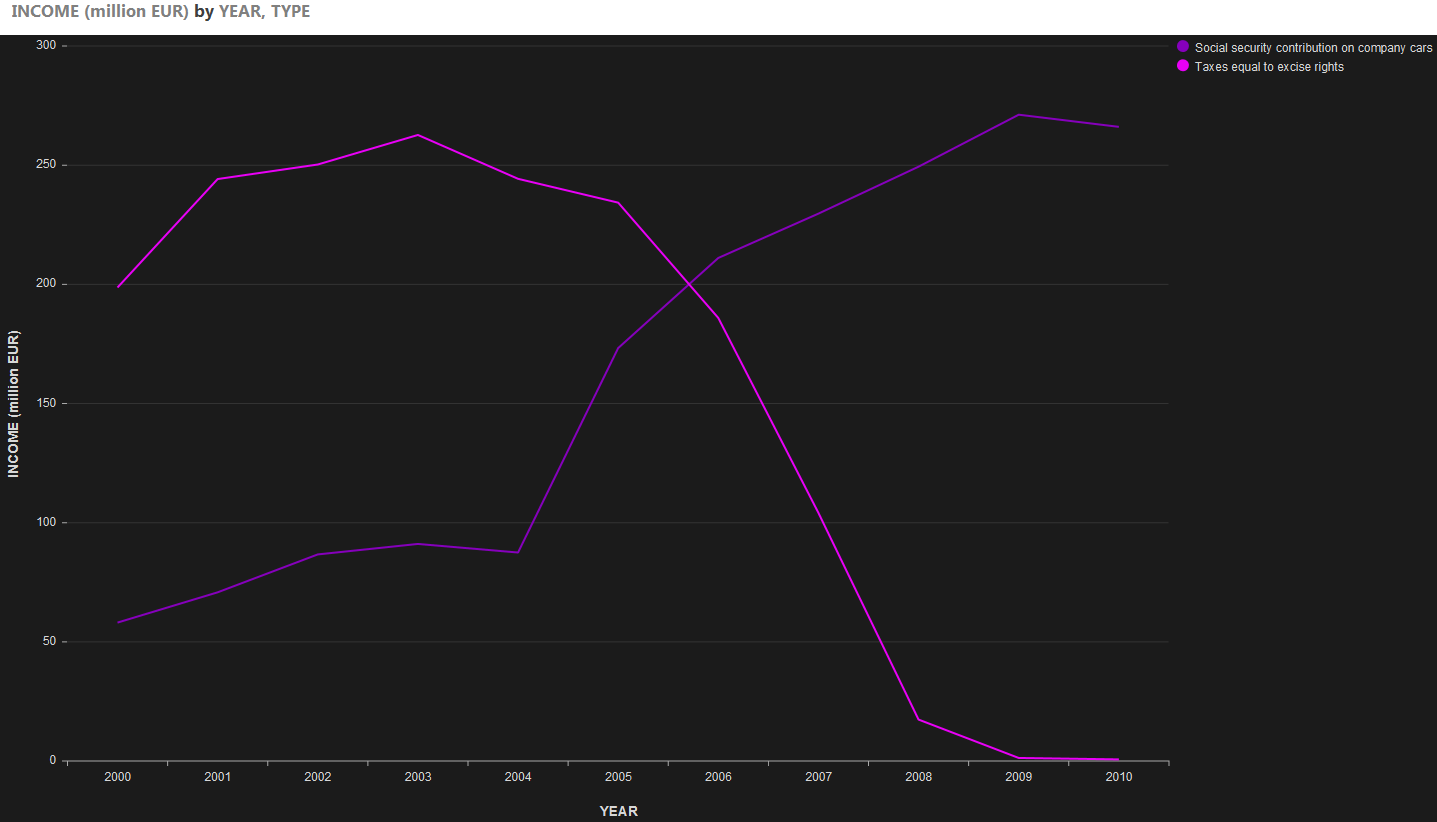 It looks like the increase of the social security contribution on company cars has almost completely compensated for the loss in
taxes equal to excise rights!!! There’s even a slight decrease between 2009 & 2010, but don’t let that fool you… the “rules of the game” have changed
once more with our current government and the figures for 2012 & 2013 will most likely be even more astonishing!

Let’s have a look at the impact of the “fiscal horse power” (depends on the size of your engine) of the cars in our country.
First we need to manipulate our input data otherwise we get a “strange” sort… and while we’re at it, let’s filter the “per additional HP” out as well (which seems to be 0 in our data set anyways): 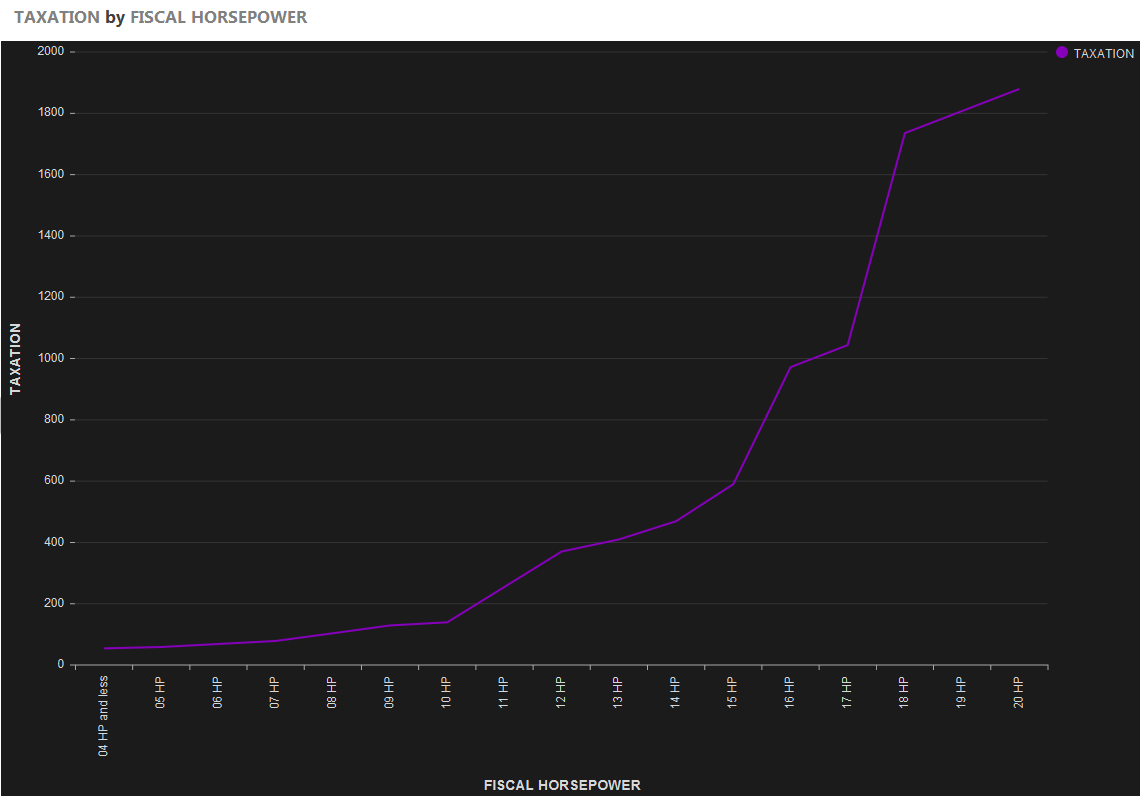 let’s see the impact over the last 5 years: 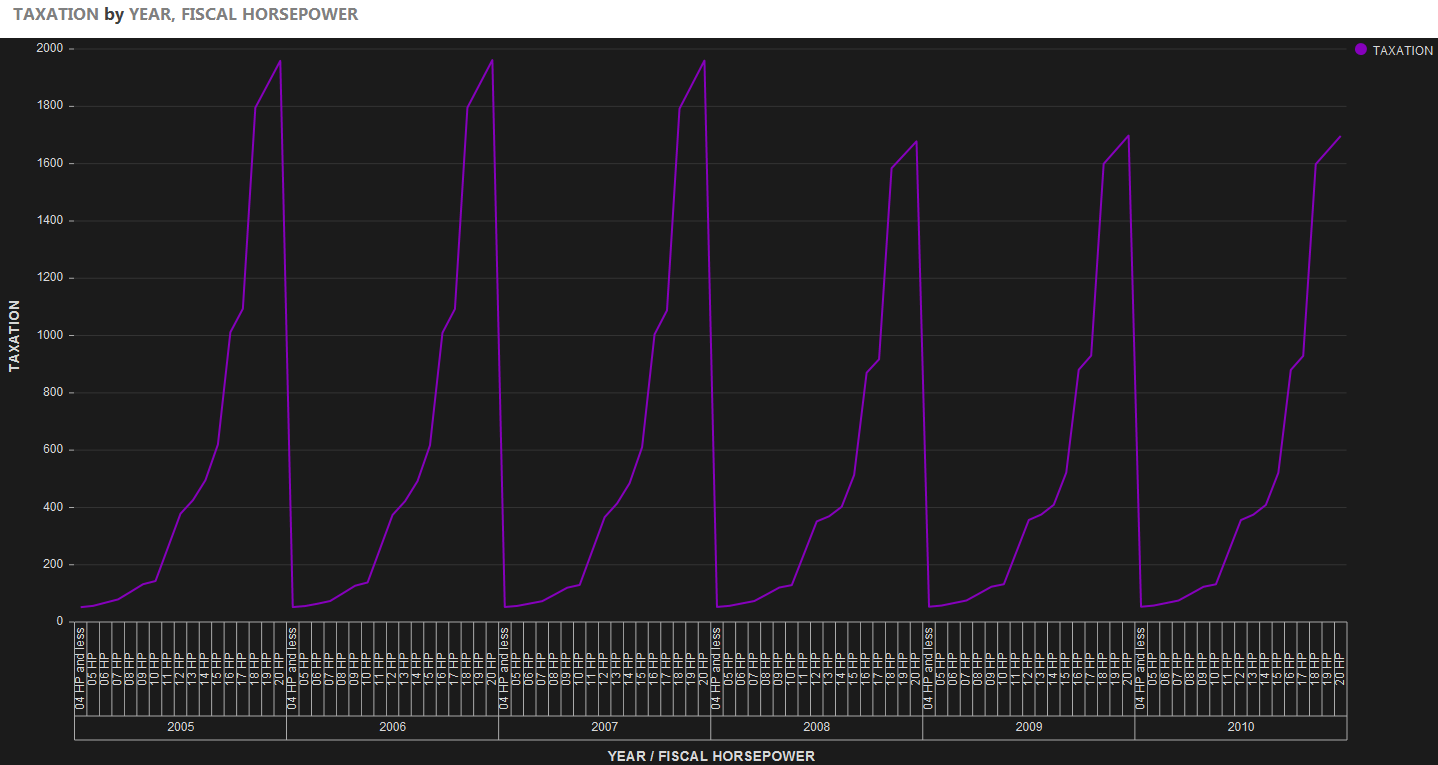 It seems that the tax amount is dropping… but, in the meantime (anno 2013) that’s no longer true.

So the “bigger” your engine, the (exponentially) higher your tax bill(s)!!!