Value Mapping – Which is the best option.

I saw many thread about the Value Mapping options that PI offers to us to solve our requirement.So I decided to post this document to make the decision more clear when deciding for one of them.

In some situations, senders and receivers know the same objects, but under different names. This value transformation needs to be represented by a mapping program.

a more elegant way of solving this task is to use value mappings or value-mapping tables. In this case, the values you need to map are stored in a value-mapping

table and then read during the mapping.

FixValues is a standard function of the Conversions function group; it enables fixed value pairs to be saved in a message mapping (that is, in Enterprise Services Repository).

Advantages and disadvantages of the standard function FixValues:

– No mass upload of values

– Configuration values are in design

The standard function Value Mapping is in the Conversions function group area and you insert it between the source and target fields. You do not save the value

pairs for the conversion directly as the parameters of the function, but instead specify key fields for accessing the value pairs (conversion values). The value

pairs themselves are saved in the configuration (in the Integration Directory), using identical key fields. The entries in the value-mapping table must be assigned to a value-mapping context. This context enables you to distinguish between value mappings from different areas.

Values that are manually maintained in the Integration Directory automatically belong to the context http://sap.com/xi/XI. Alternatively, you can replicate values from outside PI into PI with another context by using an interface.

The actual values are referenced with the key fields Agency and Scheme. These key fields must be reused in the configuration.

You can enter any strings for Agency and Scheme for the sender and receiver. It is also possible to save a placeholder for the Agency field for the runtime constant SenderParty or SenderService (and likewise for the receiver), which is replaced by the current value during execution. The standard function Value mapping can be used in different message mappings with the same key fields, thus referencing the same “mapping table”.

If the mapping of the standard function Value mapping was not executed, the message trace of the converted message contains the following entry: Key mapping from … has not been performed. Check the key fields Agency and Scheme. 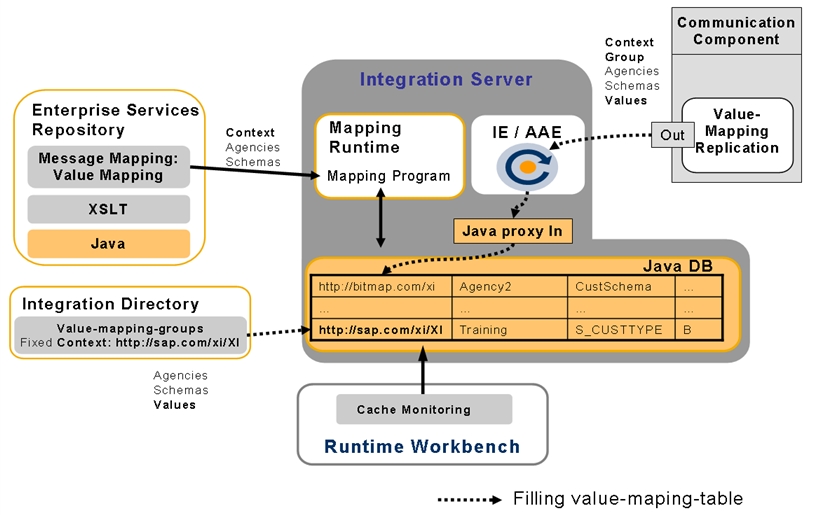 Advantages and disadvantages of the standard function Value Mapping:

+ Possible to change entries manually (not in replication, see below)

+ Configuration values are in the Integration Directory

+ Possible to use values from different message mappings

+ Possible to use Java and XSLT mappings

+ In replication: Possible to use values from the back end

To replicate value-mapping data from other applications in the runtime cache (on the Integration Server), you can use service interfaces (“value-mapping

SAP BASIS 7.30 in the namespace http://sap.com/xi/XI/System. There are four interfaces in total; two synchronous and two asynchronous, or two outbound

the basis (in the ABAP stack of the Integration Server, as in every ABAP system based on Basis 6.40 and above).

The sender can be any system containing values for value mapping. If it is an ABAP system (with proxy runtime), you can use the ABAP outbound interfaces

refer to those blog to get a more clear idea about to configure both type of services.

Mapping lookups access values (tables) in a back-end system during mapping runtime. The lookup can be executed using the standard functions RFC Lookup or JDBC Lookup (see below), or using the lookup API from java coding. The lookup API can be used either in a user-defined function in amessage mapping, or in Java or XSLT mappings.

The lookup API provides methods for generic access to application systems using the RFC, JDBC, and SOAP adapter. There is also a special API for the JDBC

The Java program transfers a payload stream to the API, which the Adapter Engine uses to send synchronously to the target system (but not a complete PI

message with message header). To deliver to the target system, a communication channel must have been set up in the Integration Directory. The response to this synchronous request is received as a stream by the Java program and must be parsed. For more information about these APIs, see the SAP Developer Network at https://www.sdn.sap.com/irj/sdn/javadocs (you will need an SDN user). If the configuration is complete and runtime is active, you can test lookups as part of a mapping program by using the test environment of an operation mapping.

adapter or the JDBC adapter.

RFC Lookup takes into account the request, response, and fault parts of an imported RFC-Signature. To be able to model the lookup graphically, the structure

of the RFC interface must be known. To use this structure in the mapping editor, you have to import the RFC-Signature into Enterprise Services Repository. In the figure below, an RFC lookup is used in a target-field mapping to obtain additional information about the number of available seats on a flight from an SAP system at runtime.

Advantages and disadvantages of mapping lookups:

+ Configuration values are in the back-end system

+ Possible to use values from different mappings

+ Graphical support for RFC and JDBC

– Takes time to learn (programming) when the standard graphical functions

(RFC and JDBC) are not used

you can see these blog refering to Mapping Lookups

Best regards to all of you 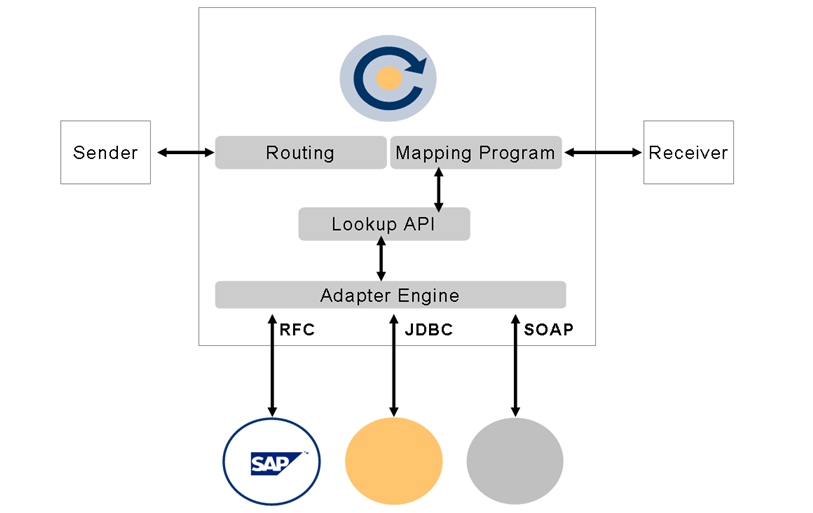