The Power-Saving App For Your Battery and the Grid

You know the “check in” feature on your smartphone’s social media app? The one you never use to let others know where you are via Facebook, Twitter or whatever?

Not many others are using it either. So the mobile powers that be are experimenting with something new: social-local-mobile nexus, or SoLoMo, which includes location-sensitive features running on a mobile device’s background.

“Some apps, like FourSquare and Path, offer ambient tracking of a smartphone so that users can share their location with friends in real-time and receive push notifications that guide them to nearby events, deals or gatherings,” BI Intelligence stated last week. “One big problem with ambient tracking and location-enabled push notifications: the battery drain of always-on GPS.”

So how is one to simultaneously keep everyone from closest family to the most distant of acquaintances abreast of one’s whereabouts without the careless loss of mobile device power?

One way around it is a new development platform based on proprietary algorithms. Geoloqi got acquired last year by SAP co-innovator Esri, and it enables coders to develop powerful, yet battery-friendly location-sensitive features.

Geoloqi-built apps don’t just save power on your mobile device, they can notify you that you left the lights on in your office — and turn them off for you. 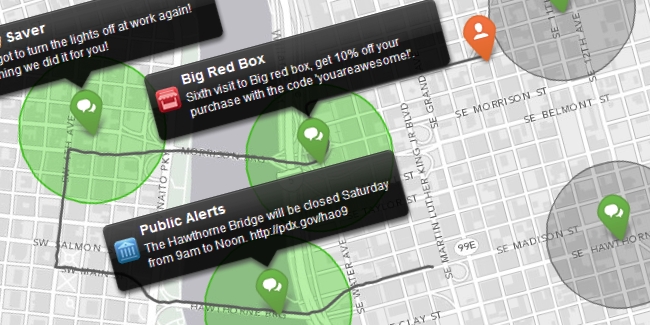