There is a lot of buzz in the marketplace around all things organic.  In my neighborhood there are several weekly farmers’ markets, organic farms, hydroponics farms and other pop-up locations which provide local, alternative sources of foodstuffs.  This is not necessarily a new idea, but the data is new and I want to understand how large the organic production market is compared to the conventional market.

I am using SAP Lumira to look at farming statistics provided by the USDA Economic Research Service (ERS).  I am mostly interested in organic agricultural productivity in the United States.  According to the USDA, organic farming has been one of the fastest growing segments of U.S. agriculture for over a decade.  The true tracking of certified organic farmland was started in 1990 after the introduction of the Organic Food Production Act.

I want to answer the following questions.  How much land is certified organic?  What types of crops are certified organic and what are the production rates?  Also, to get further into the analysis and show how SAP Lumira can uncover insights in data sets, I want to know where these farms are located geographically and is there a specific concentration?

USDA provides Microsoft Excel data sets, which are report friendly, but not in the ideal format for import into SAP Lumira.  I am able to quickly fix that by removing extra rows and columns and ensuring each column had an appropriate header.  This also gives me the opportunity to split some data into separate tabs, which SAP Lumira can import separately or merge depending on your needs.  Once completed, SAP Lumira had no problem acquiring the data and even provides enrichment of certain attributes into measures. 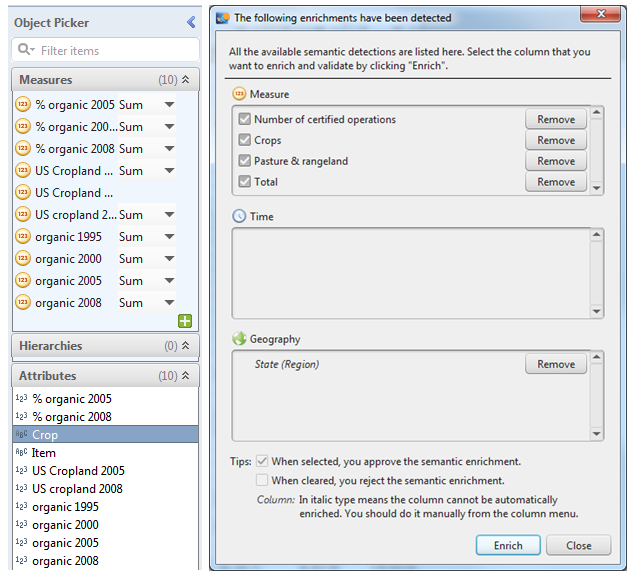 My favorite feature of SAP Lumira is the Geographic Hierarchy.  In my previous post, I created one that had 3 members:  Country, State, City.  For this example, I’m keeping it simple by creating a single member geographic hierarchy based on State. 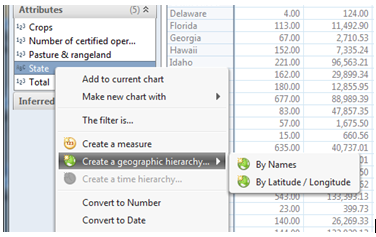 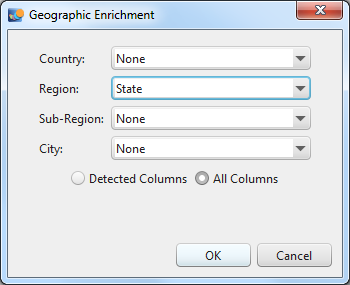 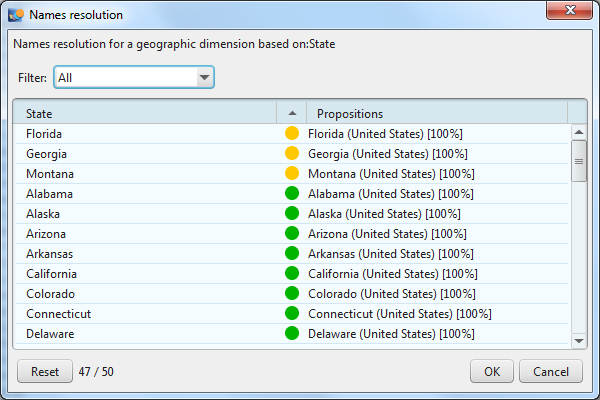 The first visualization is of the total acres of organic farming.  It is obvious from this chart, total organic crop land is on the rise, but pasture land took a downturn in 2008. 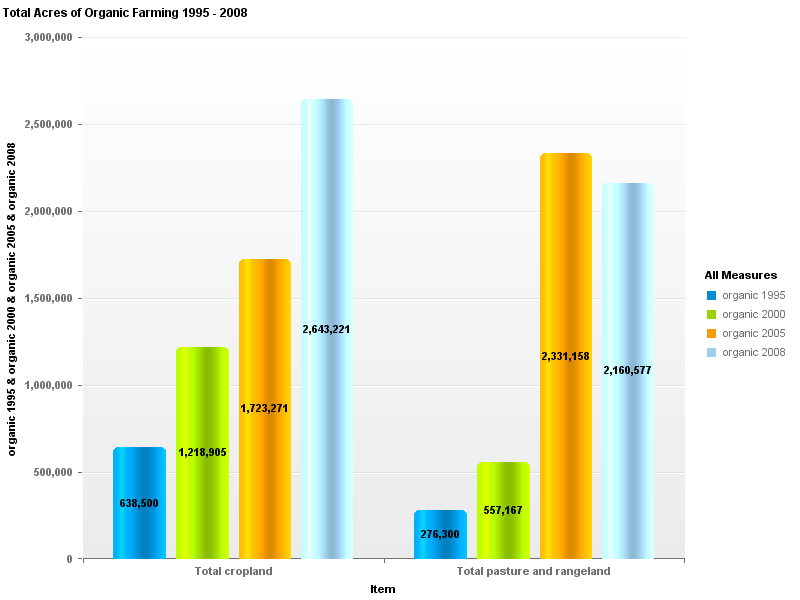 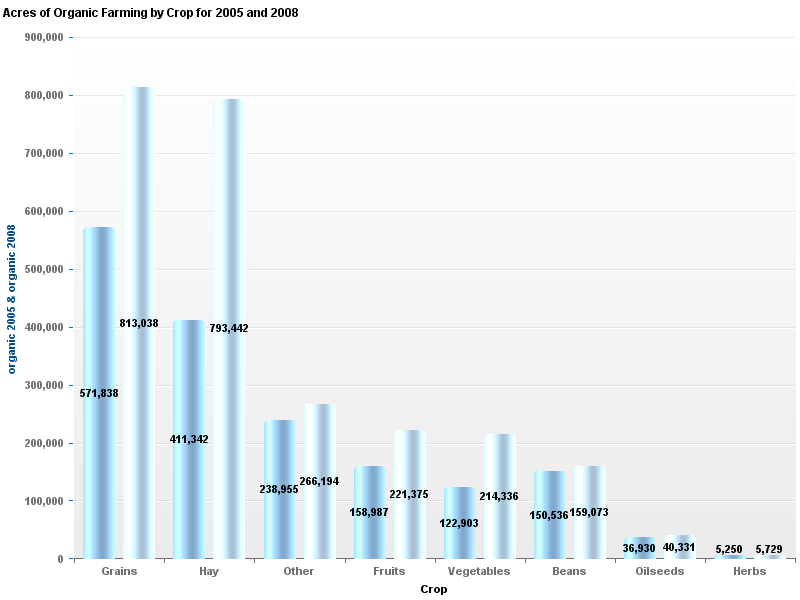 But, what about how this stacks up against conventional farming.  As we can see, organic acreage is only a very small portion, about .5% of total farmland.  What is interesting with this visualization is that conventional cropland and pastureland has steadily decreased since 2005. 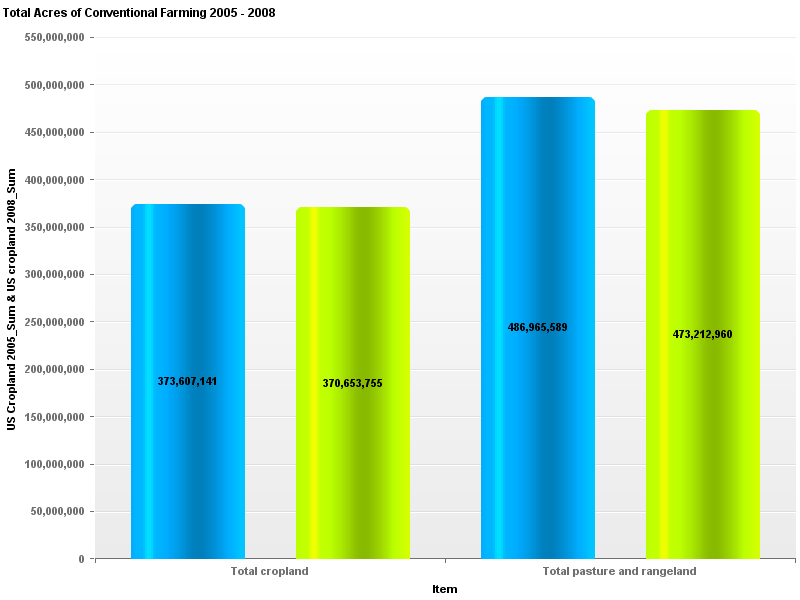 Where are the organic farms?

According to the map, California and North Dakota have the most amount of certified organic crop land.  Texas takes the third spot. 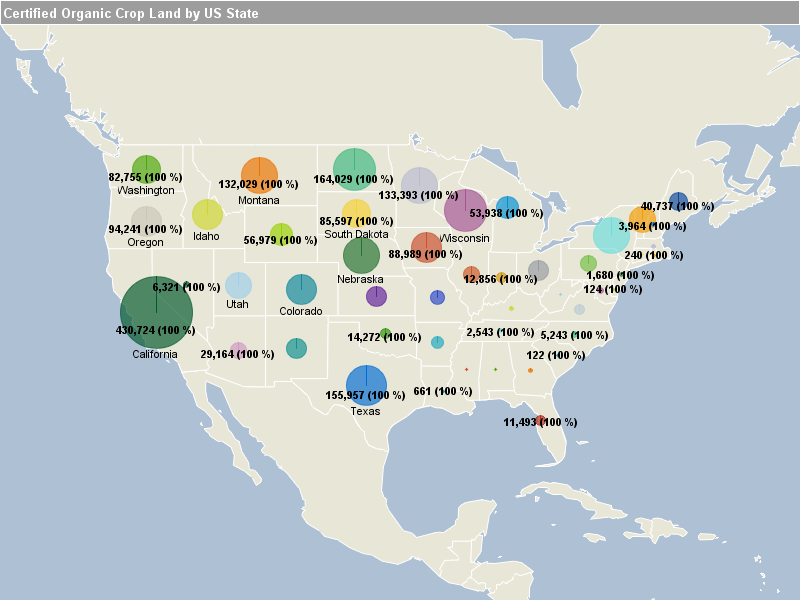 This visualization adds in the pastureland data to show that Wyoming pulls ahead with the largest amount of certified organic pasture land.  Is this a surprise to anyone? 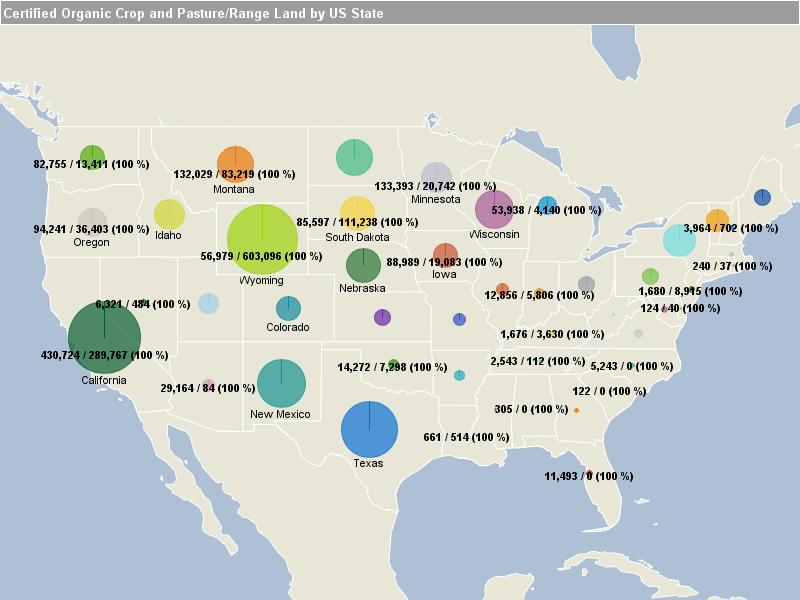 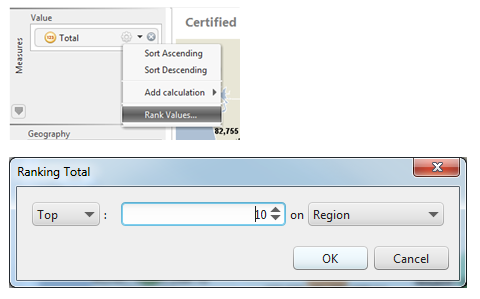 These data show that organic farms are vastly out shadowed by conventional farming in terms of acreage and production. However, the increase in certifications for existing farms as well as the creation of new farms continues to positively increase the organic share, whereas conventional farming acreage is on the decline.

I enjoyed using SAP Lumira to analyze this data.  I am continually impressed that within just a few minutes, I can import data and begin generating meaningful visualizations.