One of the cool things about being an SAP Mentor is getting asked to help out at events like Student InnoJam Dublin. As an attendee of two InnoJams I was happy to offer advice and be on hand during the event.

On the 8th August 40 SAP Interns (most are about to go back to 4th year of University) met at SAP Ireland for the Student InnoJam organised by Martin Gollogly from SAP University Alliances and Alan Fahey, a Support Team Manager at SAP. Yes Alan has a day job and I have no idea how he managed to organise InnoJam as well! Alan was aided by Uwe Kylau who set up most of the tech environments and was on hand for support most of the time. 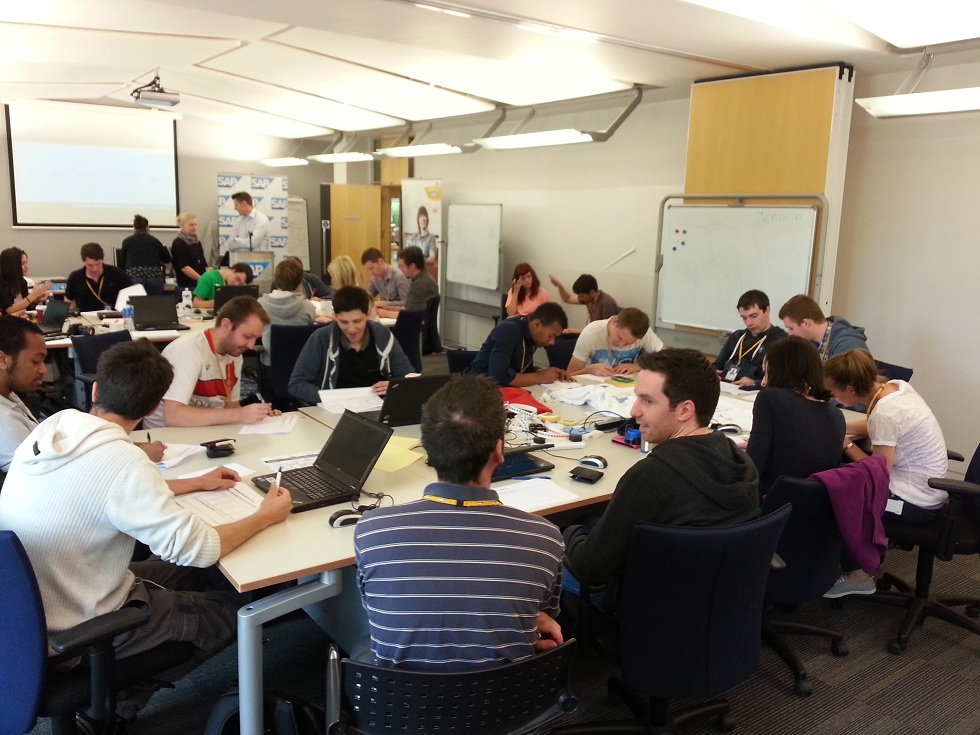 We had a really good mix of students from a variety of backgrounds from Developer Techie to Social Media and Marketing. Before the challenges were set we got busy with the excellent Design Thinking coaches to give them the skills to develop a really user friendly solution. One of the quotes used by the DT Coaches is “A Developer needs to be curious and also develop empathy for end users.” You can spend years developing a solution but if it is not what the user wants or expects it will be useless! The students got involved in a simple excersise to design a wallet for their team partner. It’s a simple excersise but it really got them to understand questioning and understanding of what their partner really wanted rather then what they thought their partner would like.

Once the basic concepts of Design Thinking had been covered it was time to get in to the set teams and start to look at the task in hand. We were lucky enough to have some live data from an SAP customer. A Global FMCG who had supplied 3 months of raw social media data to be analysed by our students!

The tasks were to create and demonstrate real time mobile solutions that offer reactive and predictive analysis for the following challenges:

1. There are a large number of people commenting on our products infrequently. Identify key influencers using social media who comment more than normal and follow them more closely in other spheres. Monitor and measure their influence in the wider community.

2. The effect of type of advertising used during product or promotional launches is of critical interest. Monitor, mp and measure changes in sentiment to specific terms or events to identify the effect of a specific promotion or advertising launch.

The team members introduced themselves, what each others strengths and experience was and also a bit more about themselves before deciding which challenge to attempt. Once selected, the real Design Thinking took place with the help of the DT coaches and Mentors. It is all too easy to get carried away and start coding but the point is to deliver a usable solution! 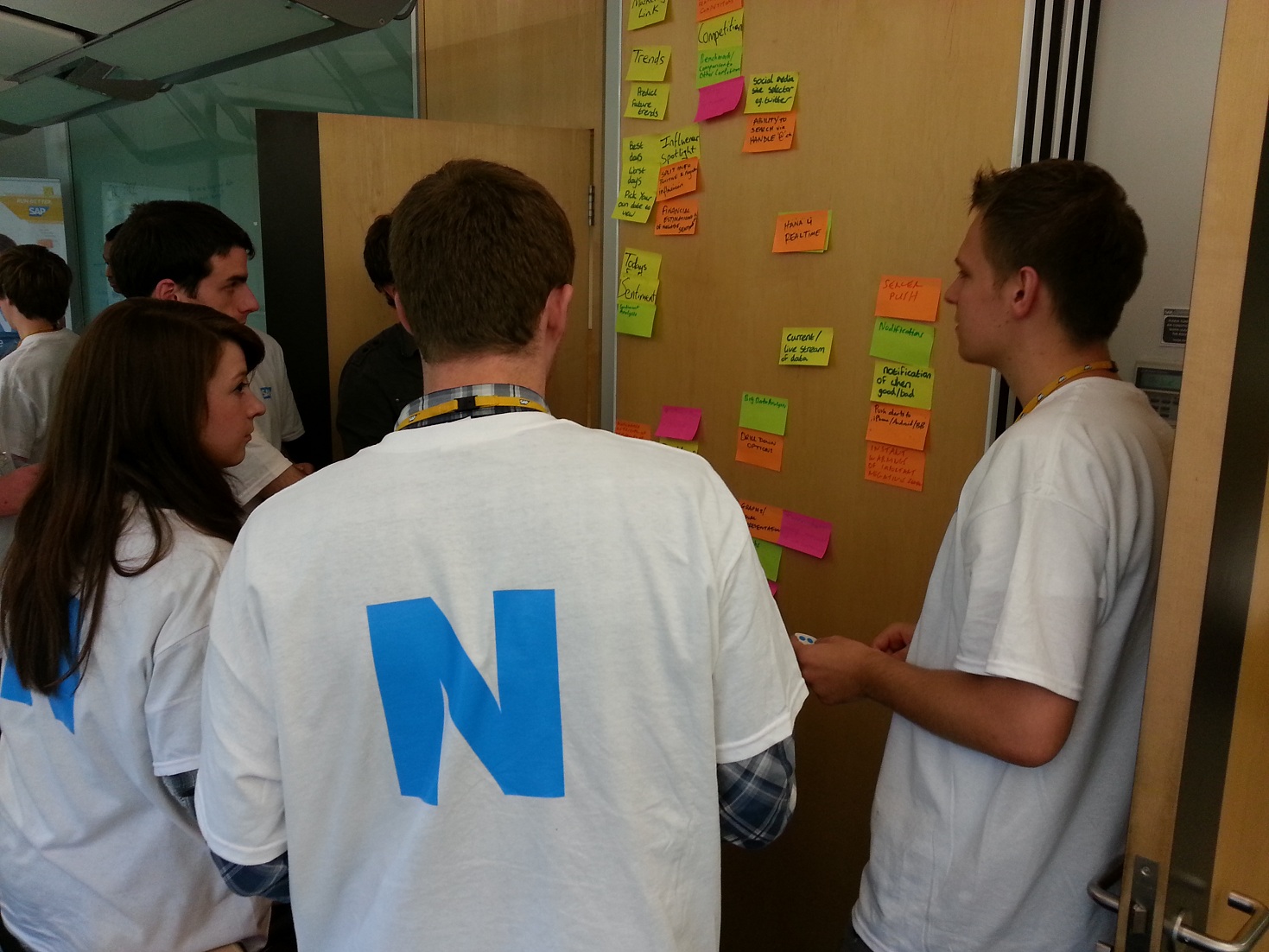 Out came the post it notes and the teams really got to work. Firstly they decided who was going to be the user of the solution. A very important question. Then they were as detailed as possible in looking at this users actual problems and needs based on the question. The Mentors kept them on track and encouraged some very specific personas which was great! The teams all drew up and documented key facts about the end user and it was great to see them pulling on real life knowledge of friends who work in similar roles.

The DT coaches left us mid afternoon and everyone was very grateful for their time. The next task for the Student InnoJammers was to break their challenge down in to tasks, allocate a time and an owner to each task to make sure everything got done and they had something viable to show in the morning. For most, it was their first exposure to project management and they really took to it well.

The teams got to work on the technology. The Students had access to HANA Cloud Platform, Predictive Alanytics, NetBase, SAP UI5 and their pick of mobile platforms.

I was impressed at the technical kowledge of some of the student developers who picked up new skills quickly with the advice form some great Tech Mentors. With only a short break for dinner at 6pm they were off. I’ve worked with University Alliances students before and they have real energy and enthusiasm for the project. I left them to it at 8pm and returned at 7am to find nearly all of the students still there. One guy had been coding solid for 11 hours! 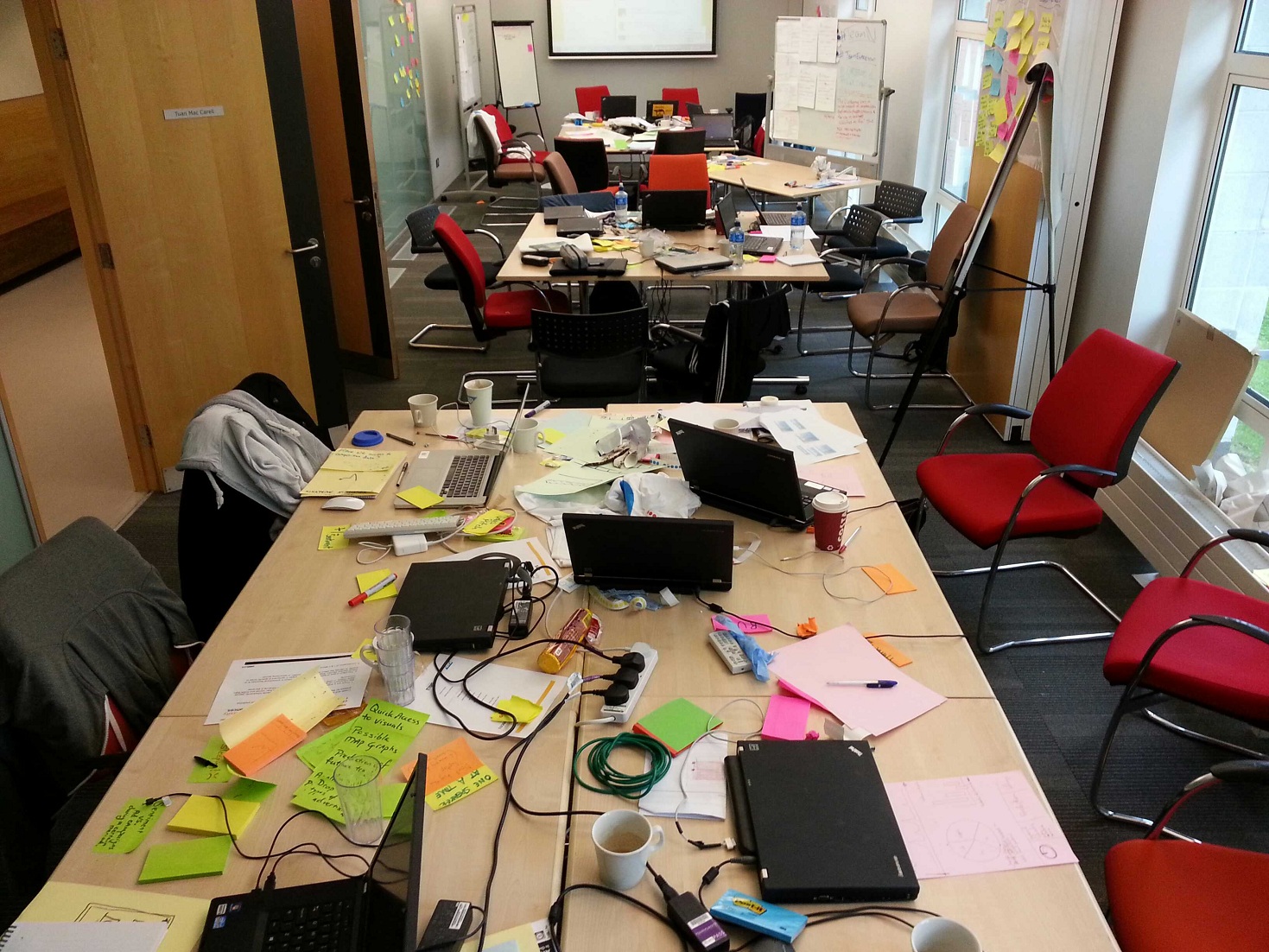 The standard of presentations was very high. Whilst some teams had trouble with HANA and connecting the back end to the front they all had some software to show. We had some very distinguished guests fro the FMCG customer as judges but that didn’t put any of the students off. They grasped that is was a “Proof of Concept” excersise and they needed to show that they understood the problem and give the customer faith that they could solve it given more time. The feedback from the judges was excellent, they could not believe what had been created in the time frame and really felt the students had understood the problem designed something that was going to be usable. This is great to hear as it shows Design Thinking really works and is not some fluffy ideology! 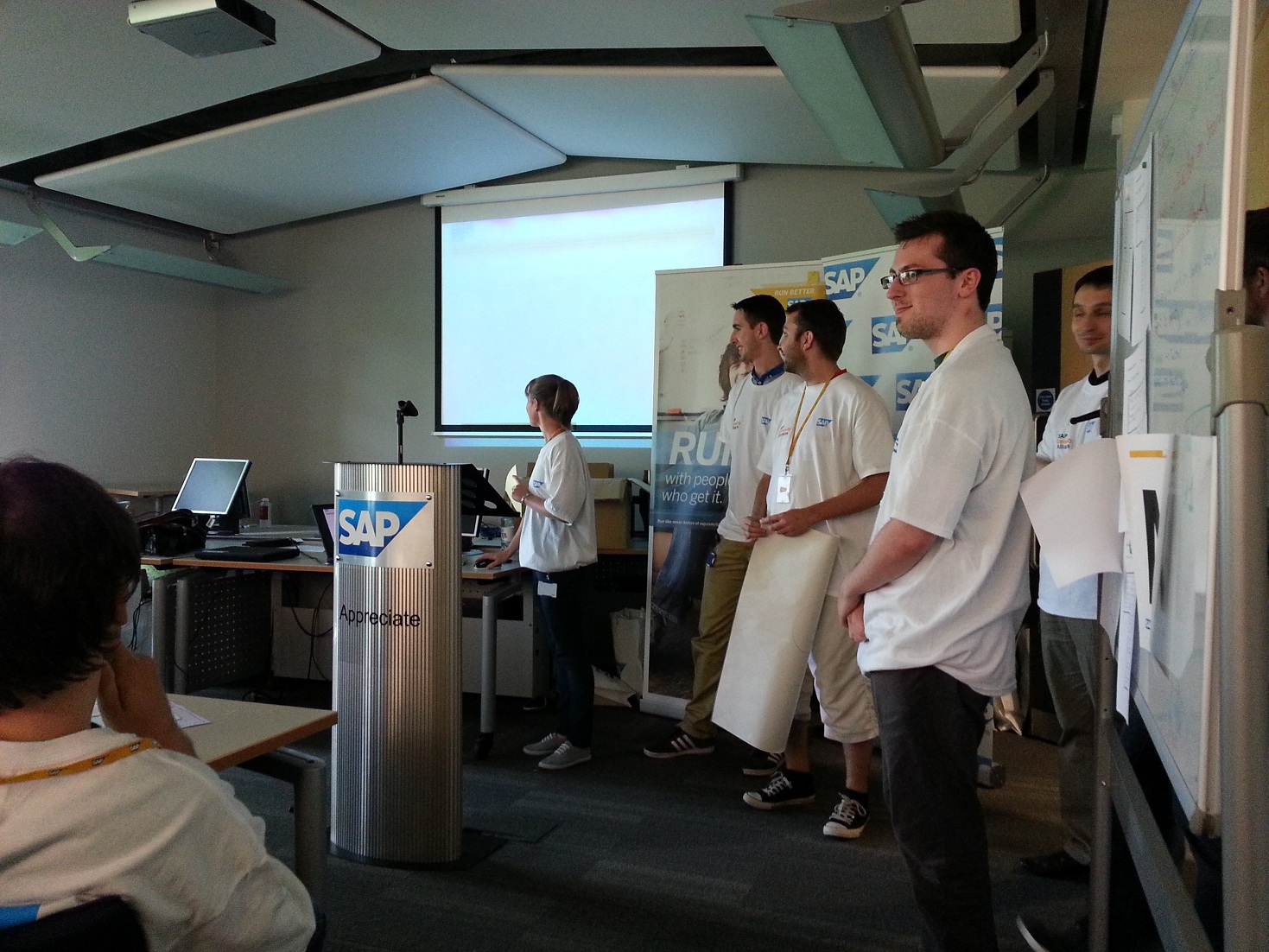 The event was sponsored by Zoedale Plc

Well done, Tim, kudos to you and everyone for taking part.

I've been doing similar analysis myself, using Data Services with Lumira to see what I've been tweeting about.

What a great project and excellent write-up.  Thank you for sharing.

Tammy, thanks for commenting.

On 26th August Mentor Public call I have 3 students presenting their work then being interviewed by @JonERP - I hope you can make it!

Excellent - what time is the public call?  I would like to add it to my calendar NOW 🙂

Sounds great and thanks for telling me

"as it shows Design Thinking really works and is not some fluffy ideology!"

After reading your experience I really believe "Design Thinking" is a great tool which unites different skills to achieve one goal.

You're clearly very enthusiastic about the whole event, and I can only guess why 🙂 .

But seriously: great recap, and I wish I could have been there. Thanks for sharing!

And totally agree on designthinking being more than fluffy ideology.

I agree with Fred. You showed a great enthusiasm and wrote an excellent recap of the event.

Design Thinking process is deeply human and we can see that the students were very focused on the user, on the usability, not only on the functional side.

Tim made an amazing contribution to this event.

He steered me in the right direction while planning and organizing the Innojam and then he worked closely with the students throughout.

Having his experience and input was priceless.

Thanks Alan - I'm flattered! Great event, definitely as good as the InnoJams I've been to at TechEd.

Great piece Tim and well done to all involved! It was amazing to see the great work that was achieved in such a short space of time and I was so impressed watching the guys in action @SAPIreland! Well done Alan on a great event, bring on next year! 🙂

Thanks for sharing Tim! It sounds like the students had an opportunity to learn a wide variety of DT skills while creating something tangible to take away. The most powerful learning opportunities during my college career were case studies which required looking creatively at a customers data and reaching a solution.

One of my colleagues attended the Innojam and had a really fantastic experience! The organisation of such an event takes so much time and precision but judging from the feedback I received from my colleague it has certainly paid off!