It was end of 2002. Exactly 5 weeks before Christmas. I was a consultant at SAP doing portal and KM development for customers. My previous project assignment just finished successfully when my manager asked me to come to his office. “There is a project, where SAP plans to set-up a community on the internet. Base on SAP portal. They are looking for someone who can develop an enhanced upload tool for documents. It is estimated with 5 weeks. Can you take that?” So this is how my story with SCN started. I did that tool and out of the 5 weeks assignment my story of more than 10 years with SCN started.

Before the official launch of the “SAP Developer Network” (SDN) a lot of tools and to be developed and system integrated. The first version that went live was based on SAP Enterprise Portal 5. Some webpages, a search on the document library, the capability to blog and a first version of a discussion forum. This blog by Chip Rodgers shows some nice screenshots and links how SDN looked these days. For the launched as beta version you had to be registered to use any of the platform. So we build the first version of the registration and I was one of the first users registered in early 2003. 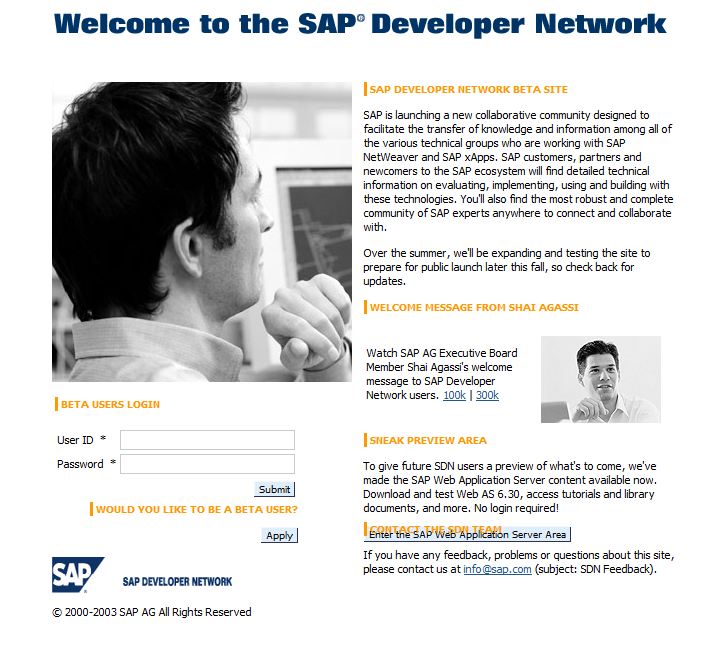 Even though the platform as changed over the last 10 years a lot you can still find the content of that time. E.g the first blog and first discussion thread.

If someone would have told me in 2003 that in 10 years’ time this platform has more than 2 million unique visitors per month I would not have believed this person. In the early days a number of 100,000 users that could be on the platform at some stage sounded so far away that we could not imaging even that number at some stage.

Looking back at the last 10 years I still can remember a lot of fantastic but also stressful moments. Moments where we celebrated big success like migration to new platforms, roll out of new functionality and integrations of new platforms (forums, Wiki, Media Solutions and of course the big migration in early 2012 to the current platform. But also challenging moments. Moments in the early days when the system performance was suffering as the landscape could not be enhanced that fast as the community was growing. Moments when the site went down due to an incident. But in general I recall all the great moments. Moments when we received the feedback from the community how happy they are with the site and how happy they are whenever we improved and enhanced the platform.

My role has changed in the past 10 years. From one of the guys doing to coding to a project manager that was responsible for a lot of the big changes on the platform to a manager of a team. This team has also grown over the years. We are not only working on SCN but also on other internal and external web based solution for SAP. Nevertheless SCN is still one of the biggest areas where the team and I are working on. There is no day in the office were I do not have interactions with SCN.

Am I proud of what happened in the last 10 years? Yes! I am very proud of the achievements we had as a team that could support the grows of the community. I am proud that I could help SCN in various roles and enable the community. I still recall the TechEd presentation I did in 2009. It was a room packed with hundreds of people who were keen on getting insides on the platform and how we operate it. This was definitely one of the many moments in the last 10 years I will never forget.

Quite often in the past weeks I asked myself: How could SCN be look like in another 10 years? Is it another decade of moments and achievements we could not image right now? The more I think about it the more I am confident it will be. I am pretty sure that the community and its platform will expand and further grow. This is my wish for SCN and its future: Be what it is right now – one of the best communities in the world. Develop into areas that we cannot even image right now.