I can has Idea? 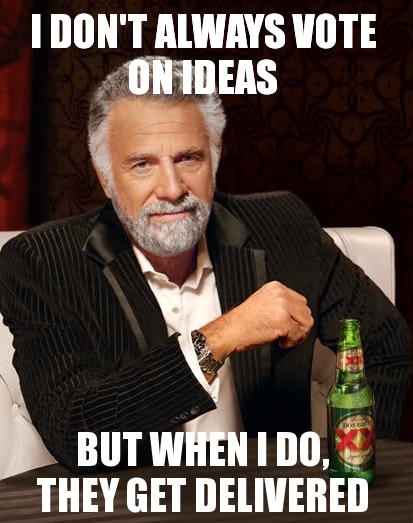 Now that the clever headline (*) got you here, let’s talk about some “submishunz” on Idea Place that totally deserve your attention and an up-vote, shall we? In no particular order I present to you:

Note that I have not included many great ideas that have already passed the ‘Submitted’ stage and (keeping my fingers crossed!) might be implemented at some point. Here is a link to the other ideas that are in ‘Submitted’ status. Please feel free to check it out and vote/comment. Note that now we need at least 15 ‘up’ votes to get an idea considered by SAP.

Yes, there is still no auto-logon on Idea Place (although you may logon with a certificate and S-user) and its’ intuitive and friendly user interface looks like it was brought to you by the creators of the SAP GRC system. But if we don’t vote on ideas then they won’t be implemented for sure, so let’s try to make some lemonade with what we have!

(*) Before anyone calls the Grammar Police – the headline is an homage to the famous I can has cheezburger meme. Thanks, Osvaldo Lopez for reminding me to think globally. 🙂

Disclaimer: the image used is my original compilation based on an image with ‘free to use and modify’ license, according to Google search. The image of The Most Interesting Man in the World from Dos Equis commercials (played ad nauseam on TV in the US) is used here in accordance with fair use license for the purposes of parody.