Prerequisites to know/master on these idea’s is to learn writing ABAP Routine’s like start routine,expert routine,end routine,characteristic routine,dtp routine for filter’s and Info package routine’s for filter’s.

Go through the following help note’s to know about these routine’s.

You can also explore SCN forum to master on these routine’s.

As it is known that transformation generates a standard program where we can see our routine written in start/expert/end routine’s.

-Select Dispaly Generated program in Extras menu as shown below. 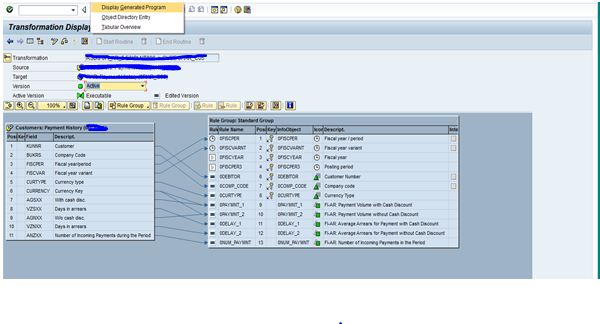 -Find your piece of code in generated program

Debugger screen opens and stops the control at session break-point as shown below.

2.Hard coding in the routine’s.

Go to your respective routine’s hard code BREAK-POINT as shown below.

Control stops at hard coded break-point as shown below.

We have many break-points can be set up while in simulating the DTP as shown in below.

I have checked “Before Transformation” in Change break-points of transformation which creates a break point in simulation mode. Control stops at a point before the transformation code is executed as shown below.

A screen appears with different tabs now select ABAP Command where you want to stop the control again which should be at your code(Start/End/Exper/Characteristic routine’s).

In my example Delete is the command used in start routine so the control stops as shown below. 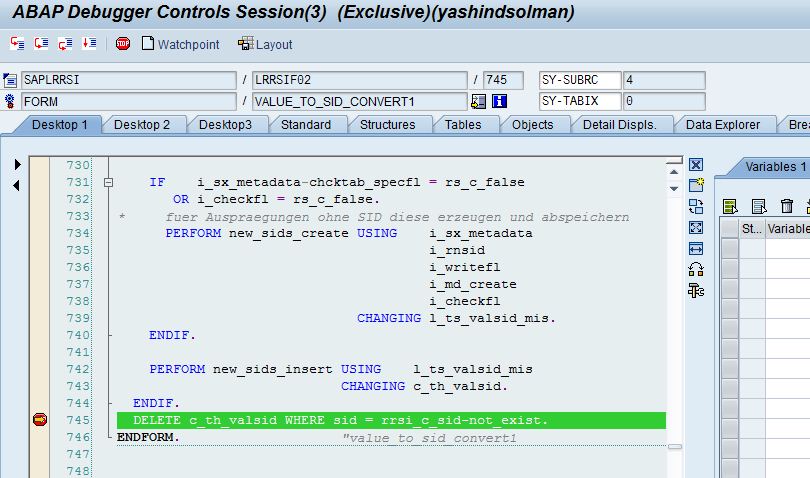 Now go ahead with your debugging come out with successful colors.

Note:Hard coding in the routine’s is least suggested so please give least preference for point no. 2.

For more information Expert mode debugging go through my blog on

Never use a hardcoded breakpoint in that way. Always use it for your own user: BREAK-POINT myuser.

Never let a hardcoded breakpoint into your production system.