Which is the best team ever in FIFA’s World Cups?

I know that as a Brazilian, it will not be big news for any of you that I had to write this post about soccer. So, the intention here is to write about soccer and use SAP Lumira to show you which is the best team ever in FIFA´s World Cups.

I have used Wikipedia as source for all data I’m presenting here. You can find it on the following links: FIFA World Cup and National team appearances in the FIFA World Cup.

So first thing I have done was to insert the data into a nice MS Excel spreadsheet in order to have a consistent source for my SAP Lumira analysis. The spreadsheet look like this:

As you can see in the picture above I have only taken those countries which have won at least one cup. Some of you may claim that is not far, however, if the country has no title it could hardly argue to be the best team ever, isn’t that? Anyway, I believe all field are clear and self explanatory (at least for all those who are interested in soccer) except one: “# weighted podium”. That field reflects the result of the following formula: <# of first places> + (<# of second places> X 0,75) + (<# of third places> X 0,5) + (<# of forth places> x 0,25). The formula has no special statistical function, it is only a way to acknowledge the importance of reaching respectable position on several cups.

Having that said, I have imported the file into SAP Lumira with the following outcome: 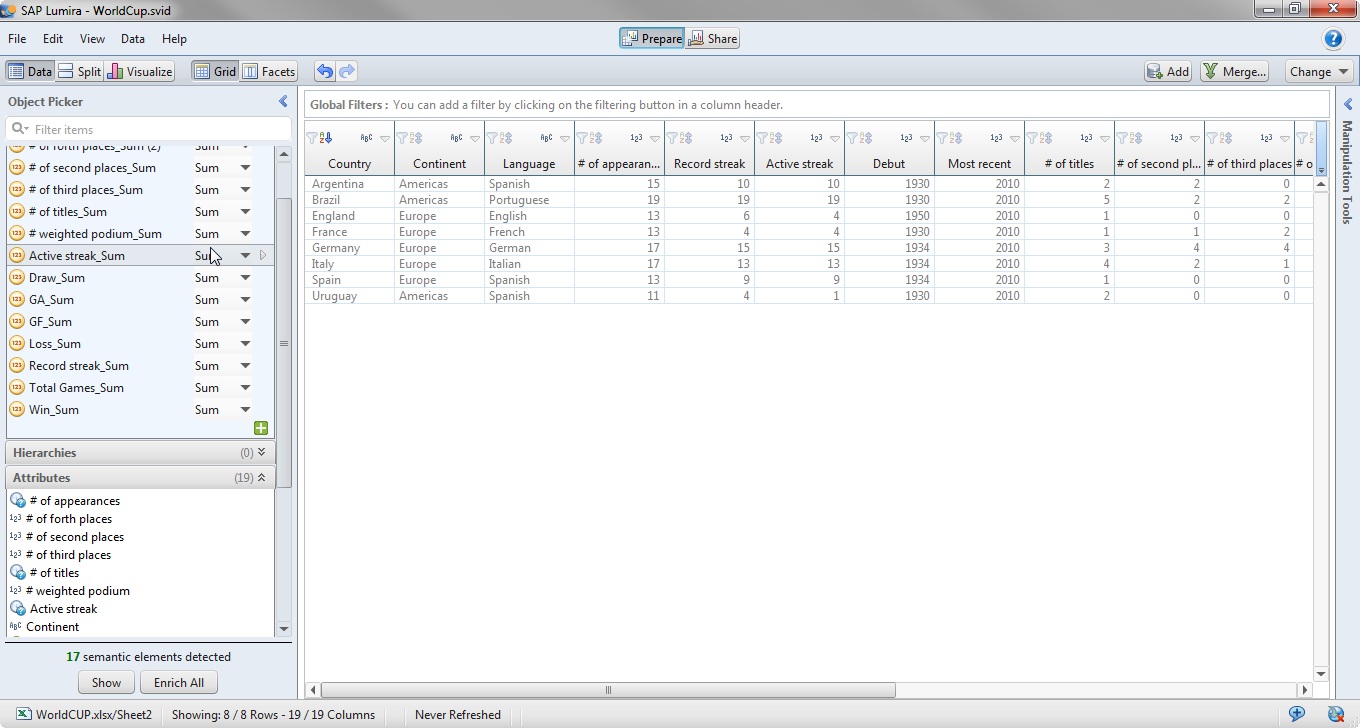 Then it is time to have some fun. Switching from data to visualize tab. If we use the simple criteria of number of cups won, the result is pretty much what we all know: Brazil is the only team with 5 cups as we can see in the following picture: However, when we look the same view with our new measure called “# weighted podium” we will see a different picture: 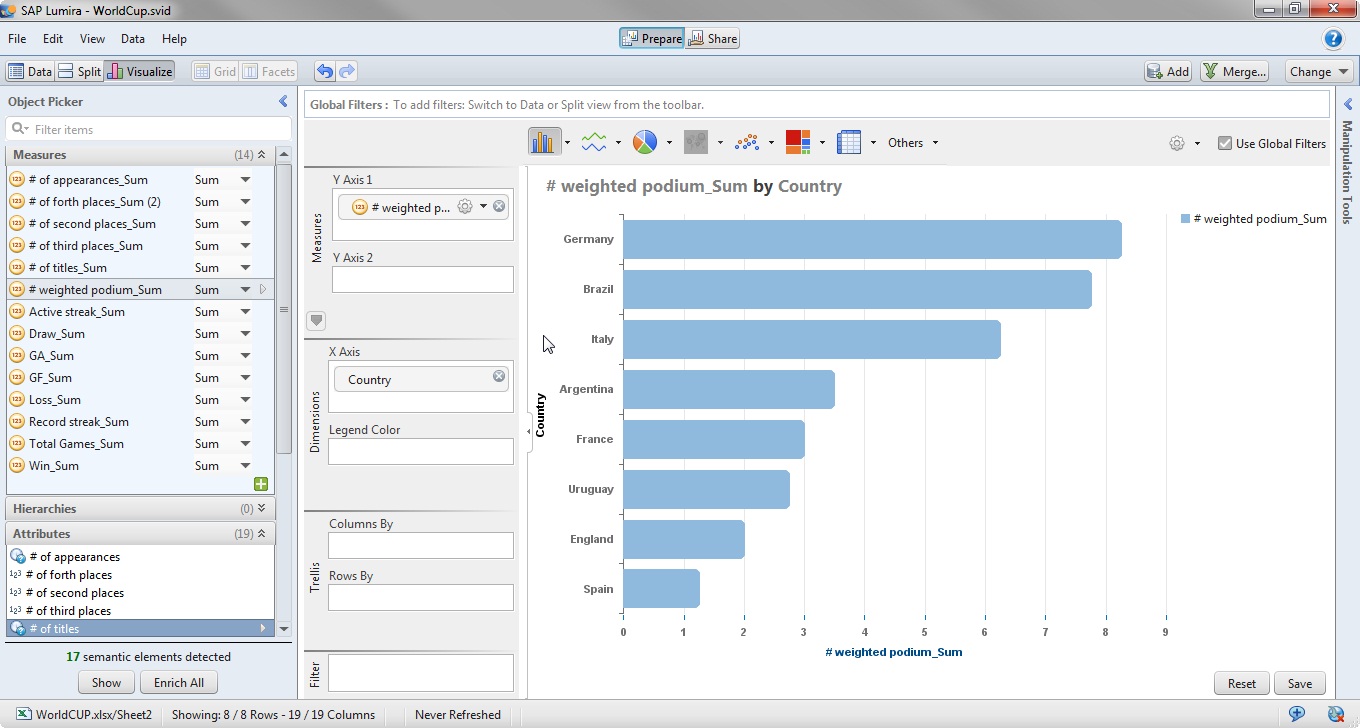 Based on the overall podium results, Germany is the number one country once besides its 3 first places, it also have a good number of second, third and fourth places.

But that is only a partial view of the world, based on a single dimension which usually does not allow us to see the full picture in real life. Let us take additional dimensions of analysis: # weighted podium, total number of games won, total number of games (which correlates with been able to qualify to final phases) and finally the number of times the team has played a FIFA World Cup. That gives us the following picture: 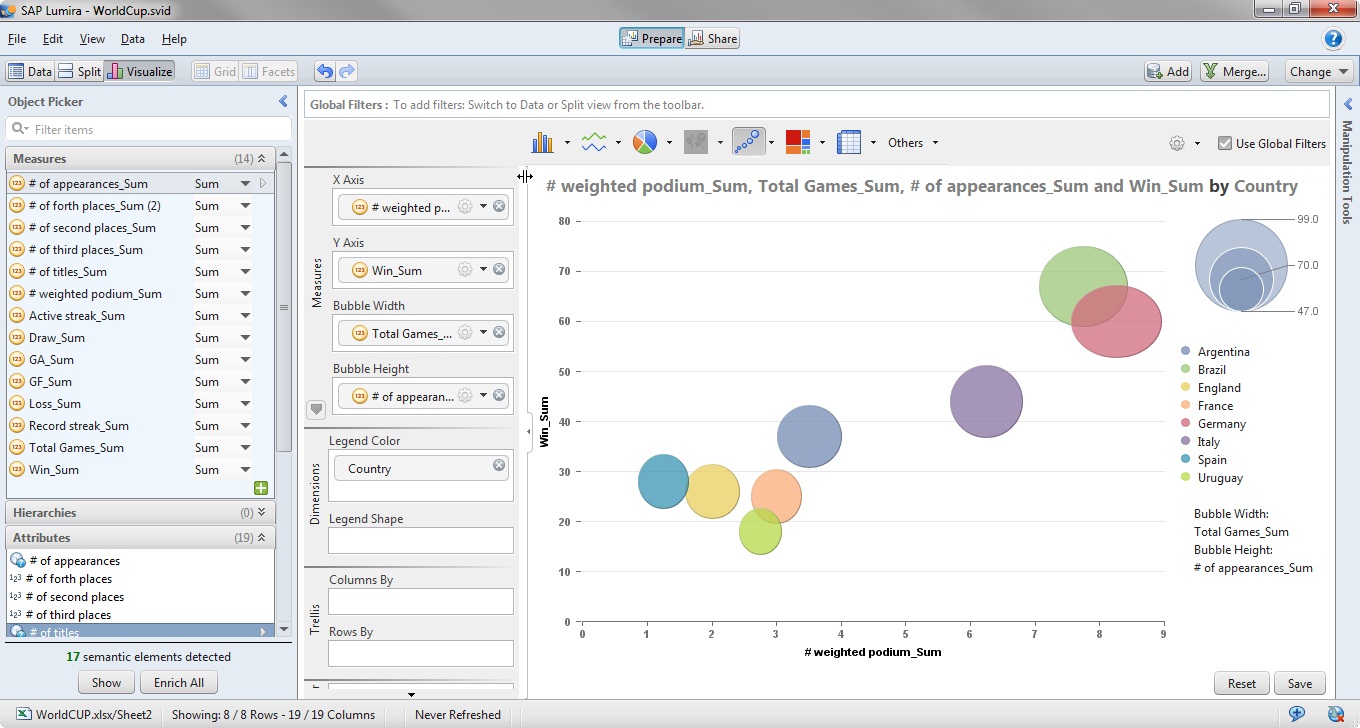 And although my Spanish friends would never agree with this chart, it states clearly that top three teams ever are: Brazil, Germany and Italy (in alphabetical order). So, in order to avoid first impressions, let us dig deeper on those top 3 countries and evaluate then by: number of victories in games, number of scored goals and finally by weighted podium: 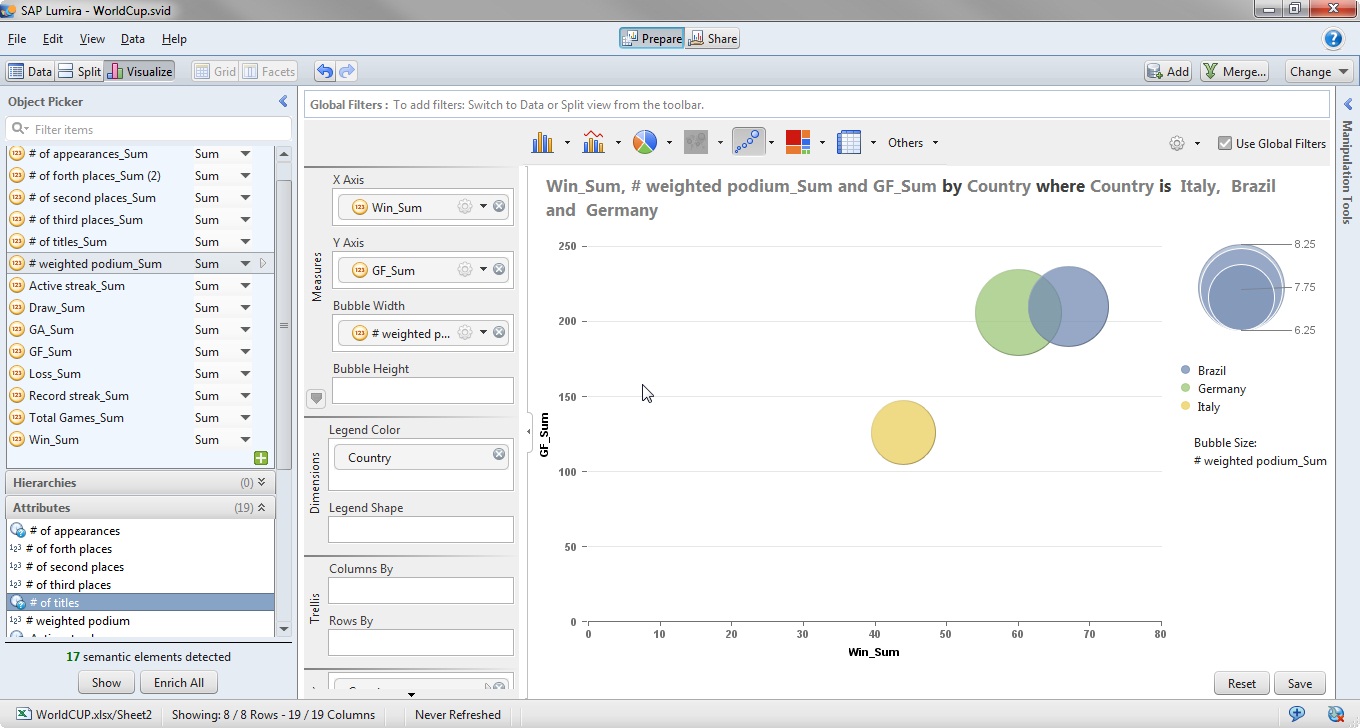 So as you can see, using the given criteria we can conclude the best team ever in FIFA’s World Cup is Brazil. Clearly, we could also perform different analysis as, for example, which teams collaborate more for the total number of scored goals while avoiding suffer goals. In that case, best combination would be bigger square (meaning more scored goals) with lighter color (meaning less suffered goals): 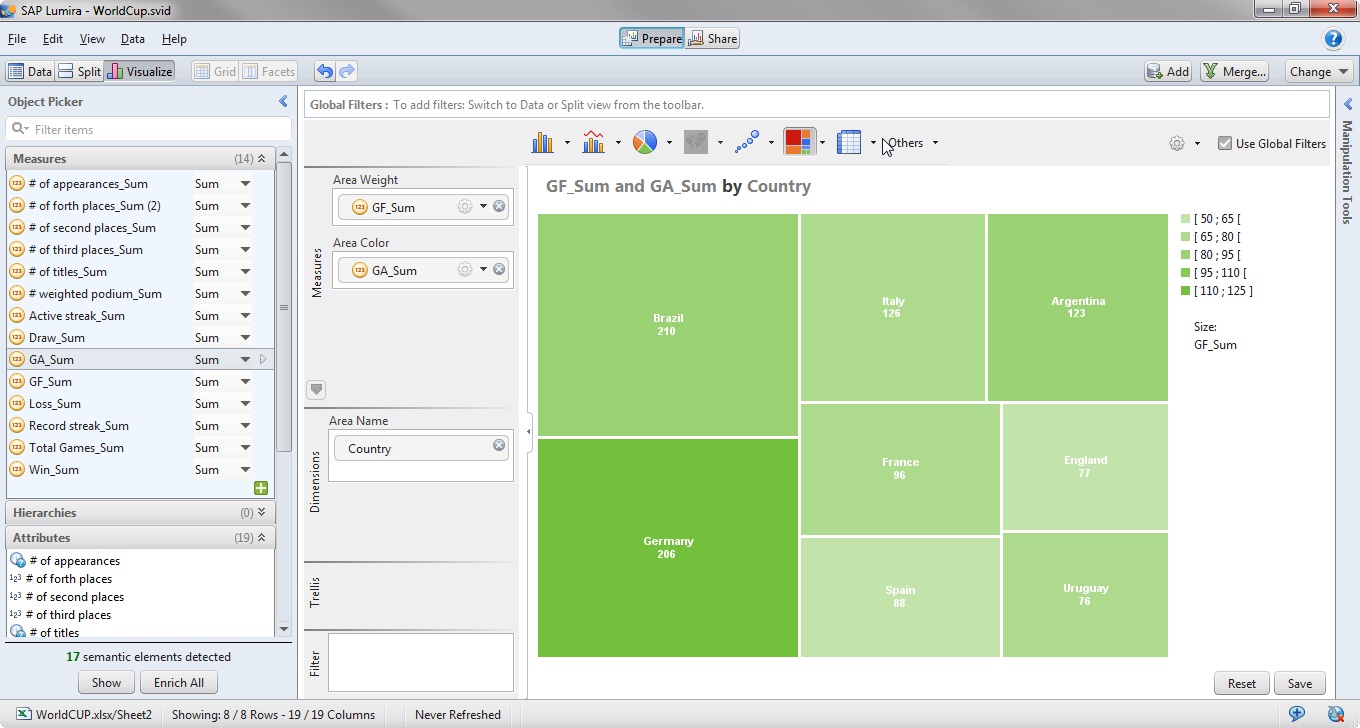 Or you could, for example try to answer which language does soccer really speaks: 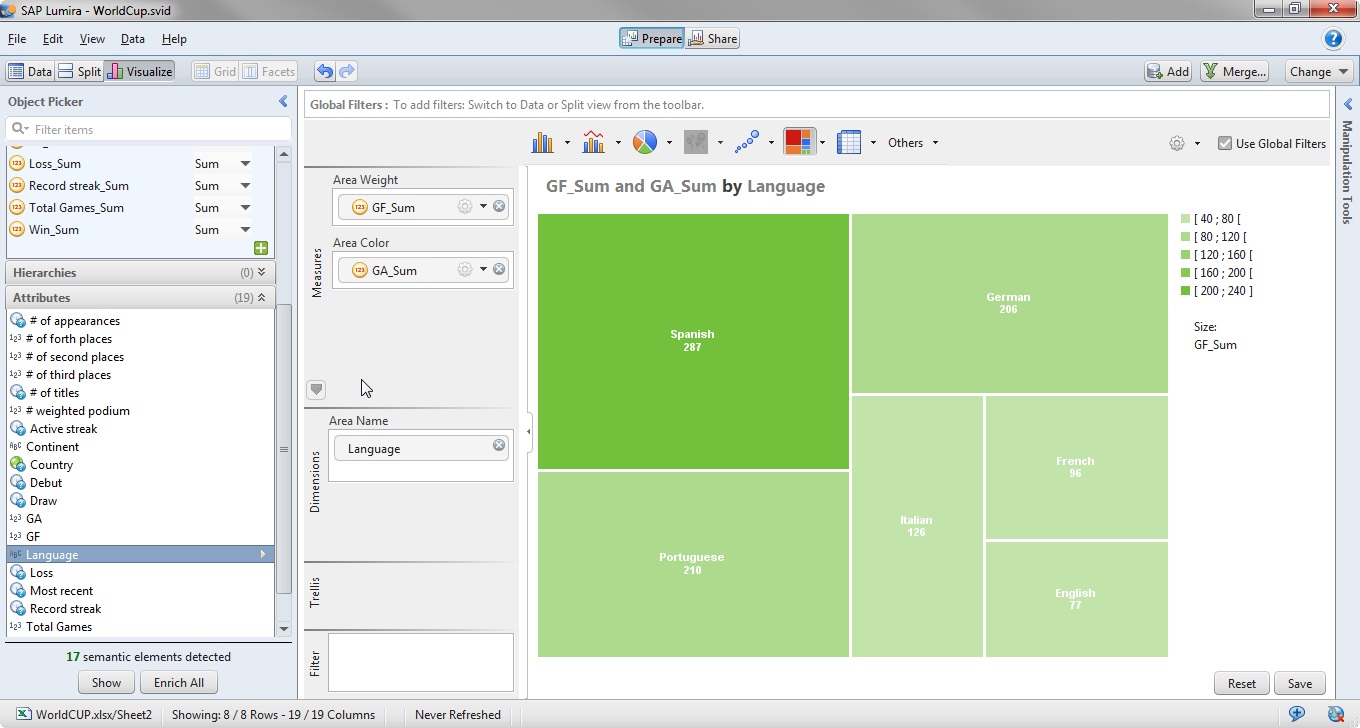 Well I do hope nobody is really taking this serious, All conclusion regarding soccer are but a joke, the only truth in it is the power of analyze and visualize data provided by SAP Lumira.

It is really good and could you pleae help me for similar activity! I have installed SAP Lumira and intention of doing the same.

I believe installing Lumira and giving it a try is a great way to start. The tool is intuitive and I think you can get a good understand of it simply by clicking around. Fell free to post your questions on SCN, I'll answer it if I can 🙂