I accessed publicly available World Bank data via below link.

Below I have described how I have used SAP Lumira for my analysis.

At first, we have to work on the raw data available to us; we have to make it ready for consumption for visualization. 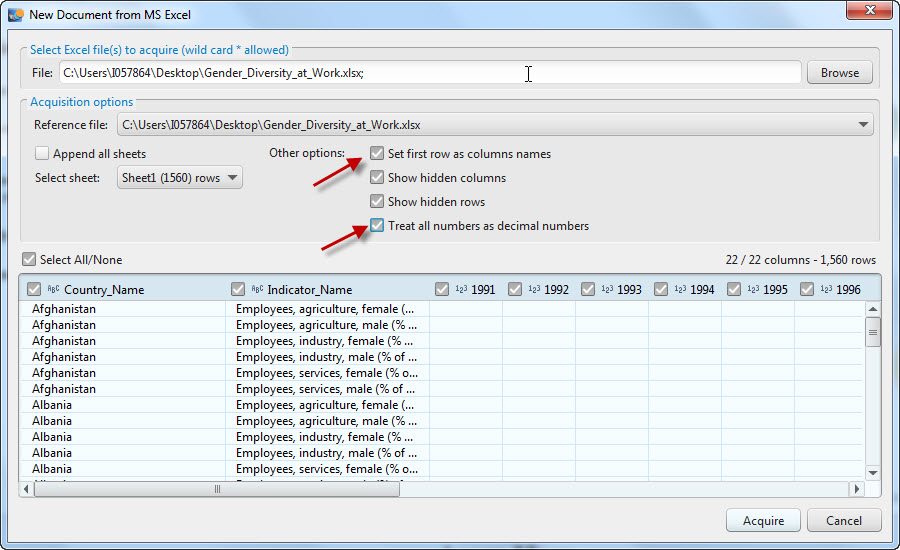 As someone wisely said, when you indulge into a similar exercise please realize that we don’t own the data, put efforts to first of all understand the data and then model it with data manipulation features available in SAP Lumira. Data cleansing, manipulation, filtration can all be done in SAP Lumira itself.

Data has been pulled in the following dimension and data is available in columns per given year ranging from 1991 – 2010 for different countries.

First of all I created Geographic Hierarchy using the name option; SAP Lumira comes with internal geographic repository, which helps in identifying the geographic location in the data by name, or by latitude&longitude coordinates. One can identify Country, Region, Sub region and city.

When I try to identify Countries via names, some of the countries were identified implicitly for which the mapping was 100% and for some we had to choose who had reasonable percentage of mapping and some were not found at all, so I manually picked some and for others I changed it to “not found” then later I filtered and excluded those which were unresolved (Data against which countries could not be identified). 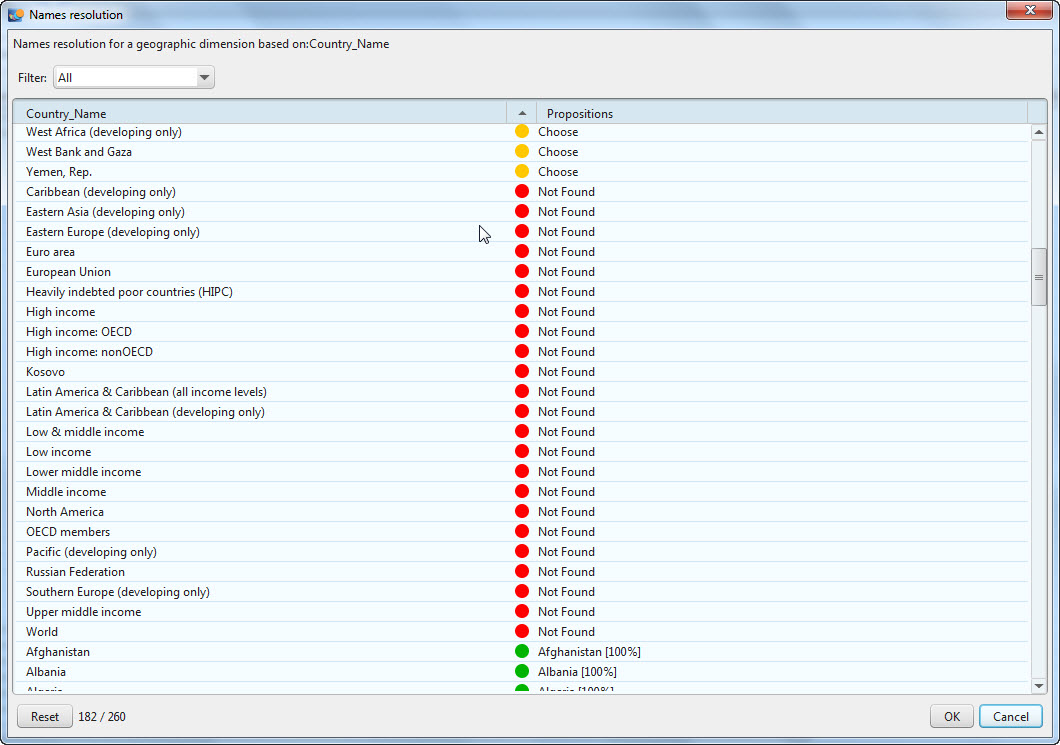 I then used manipulation tools available on the top right corner of the screen to prepare calculated columns, i.e Decade (1991-2000) average and Decade (2001-2010) average and then later I used these two calculated column to prepare another column “Average of two decades” and then later I excluded all those values for which I get empty values for the final column Average of all these years. I also worked on “Indicator_Name” and using string function and I made two additional columns which identifies employment sector type (Industry, Agriculture, Services) and gender (Male/Female)

Employment among men, women across different sectors in different countries.

Here we are analysing average percentage of men and women employees in different countries across different employment sector. In agriculture sector, we could see maximum variation in gender diversity for different countries whereas in services sector, we see this is the least.

For Indonesia we see the gender diversity is fairly good across all the sectors.

In Venezuela, % of employment among women is more than men in all sectors.

In services sector % of employment among women is more than that of men in most of the countries.

Gender diversity in the Industry sector 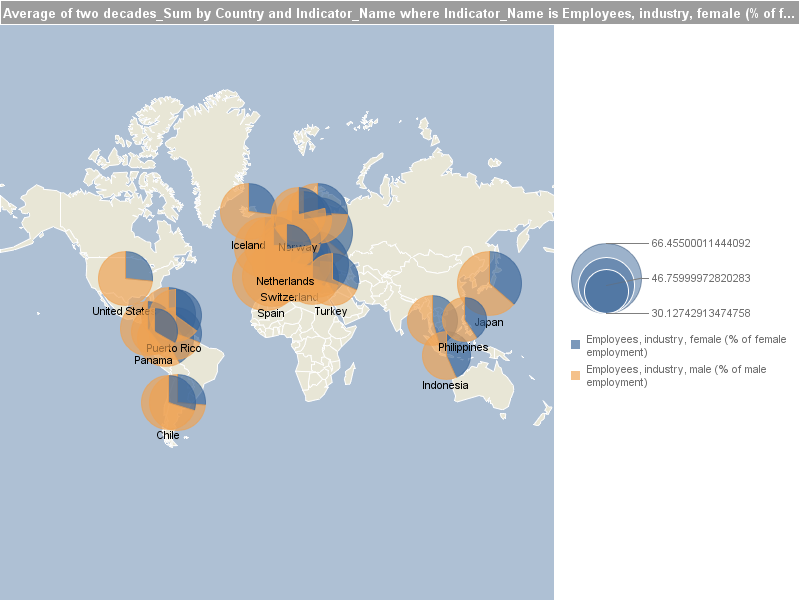 We see Europe, America’s needs to improve on this and APJ is doing fairly well

Philippines and Indonesia is best among the countries shown in the map.

In the next chart we could analyse that among employment sectors, agriculture is the least women friendly sector. 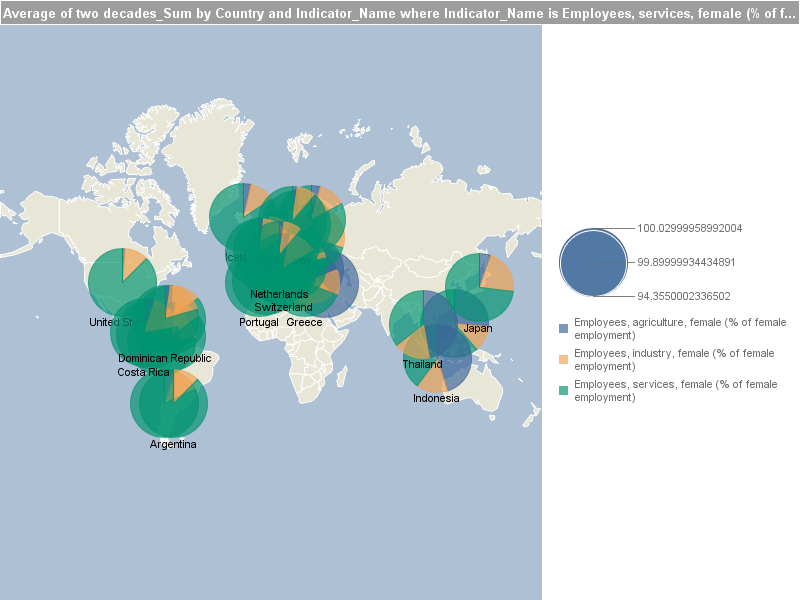 Let’s further see for two decades (1991-2010), what all countries have worked on to offer equal employment opportunities for women. 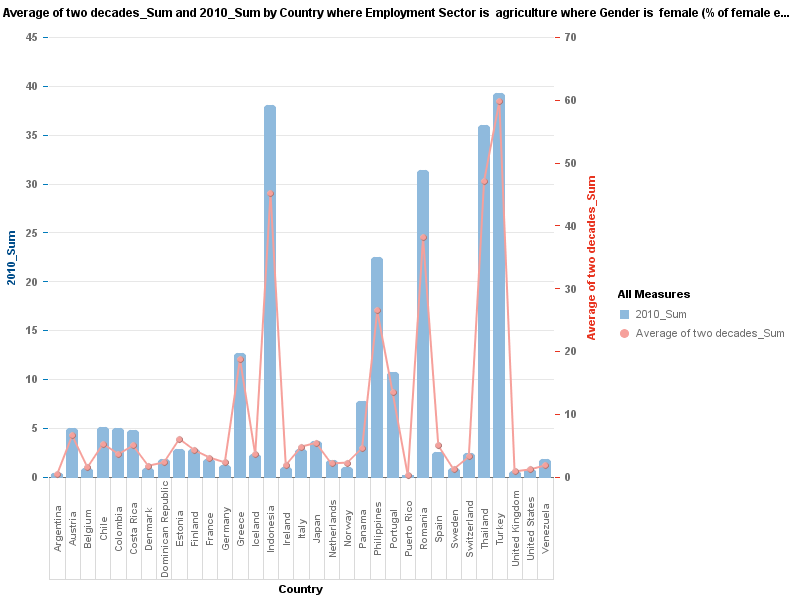 And In the end I have used Bubble chart using the following.

Here we could analyse how different countries have performed from 1991 to 2010. 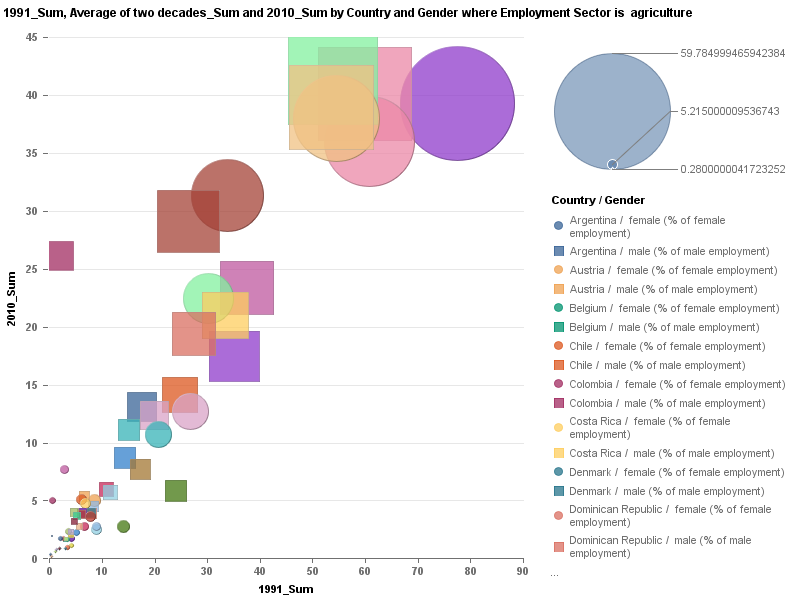 Disclaimer : The data was pulled from world bank website and the analysis has been done for demo purpose only, there could be error in the data or analysis done, Kindly use the data at your own risk.

Nice, my entry is also in similar topic. I liked the maps.

1. Analysis could have been better if there was a further drill down within industry and services sectors on the basis of "type of industry" or "type of service". Ofcourese this depends on the raw data available ...in this case from WB.

2. Considering that India has seen huge changes in the past decade it would be nice to see as to how the data varied between the two decades considered for analysis.