So here we are, the new football (soccer) season is underway, with less than two weeks to go till the start of the English premier league. As it will be the first time that my team, Cardiff City, will be competing in the premier league I thought it was more than suitable to produce some analysis based on the topic. There is a huge amount of interest over the summer months, or “transfer window” as we call it where the back/front pages will be filled with gossip, who will move where for what price. As well as interest there is also a huge amount of money involved in football transfers, in the UK since the start of the EPL the figure stands in the billions of pounds, this is big business!!

As an avid football fan, I’ve put together a list of the past two years worth of transfers to analyse who the big spenders are, who are the most active and what trends exist. The first flat file contains, the type of transfer, the fee, club from and too, the value, a count, date, country from and country two. A second sheet then contains club and performance statistics to merge later on to put together some additional calculations.

So firstly who have been the big spenders over the last few seasons, the data is from 01.07.2012 through to 06.08.2013. It’s clear to see the top 10 is filled with the majority of the big names who are finishing close to the top of the league, but also some emerging names in the EPL such as Swansea, Norwich& Southampton have spent relatively large sums of money, maybe this is due to surviving the first year in the premier league with the vision to become stabilized in the division. It’s also interesting to see some of the teams that are spending lesser amounts of money that teams in division below them but still performing very well such as Fulham and west Bromwich! They don’t even make the matrix! 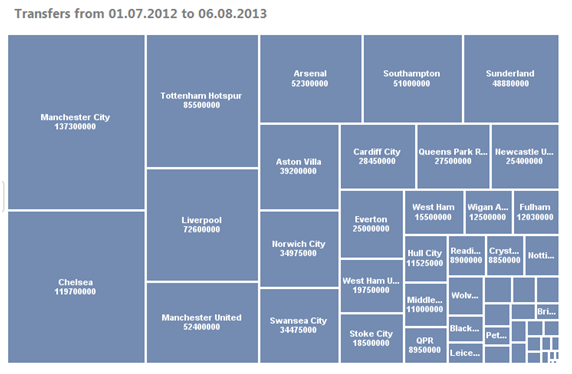 From the following Bubble chart we can look at the big spenders and their transfer activity, and the average amount they spend on a player. As we can see here again the chart shows the big clubs spend large sums on a relatively small amount of players, where teams from lower divisions tend to spend less on a higher frequency. Also interesting to see the average player spend(size of the bubble), would clubs who would be selling a player look to increase the selling value from this? 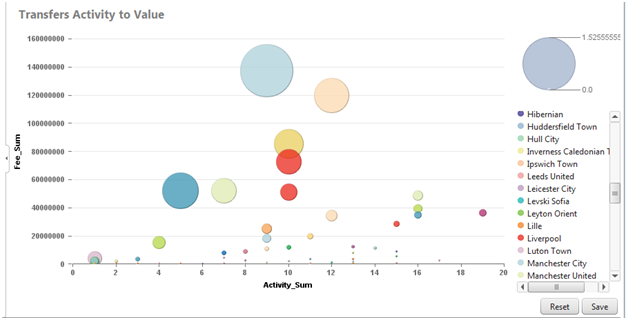 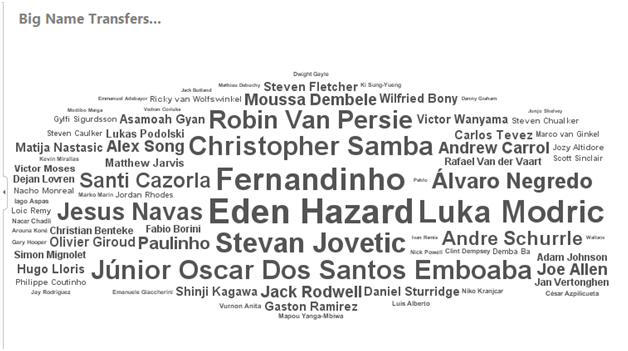 At various points in the season we often hear our national team is under performing due to an influx of players from overseas, how does this show within players leaving and heading to the UK. Note, I haven’t got nationality of the player in our data set to filter by, just the source club location. 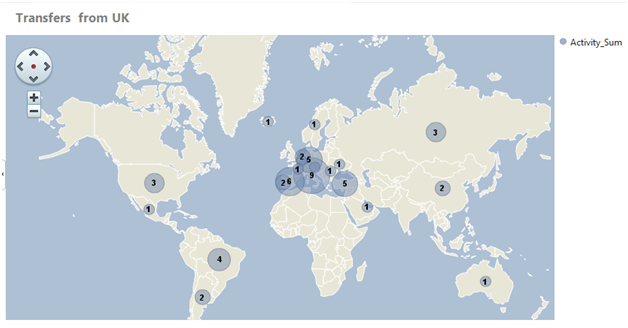 As we can see there is a much larger influx of players coming to the UK than out. How do these compare in value, which countries leagues obtains the most value from British clubs, as we can see here France, Spain & Italy are the premier leagues biggest leagues for players.

Lets also have a look at what typically happens when a club gains promotion, take into account my club Cardiff City, you can clearly see an increase in transfer value over 50% increase in spend from last year, does this tend to apply across all leagues?

As noted previously there are many transactions and player movements throughout the duration of the premier league. As we can see here the majority is players moving on free transfers when they finish their contracts or are free agents.

So how do each of the league compare between activity and value, which managers will be the most active over the summer. As shown the championship is the most active league in terms of transfer activity, notably there are four more clubs in the division which could skew the figures some what. 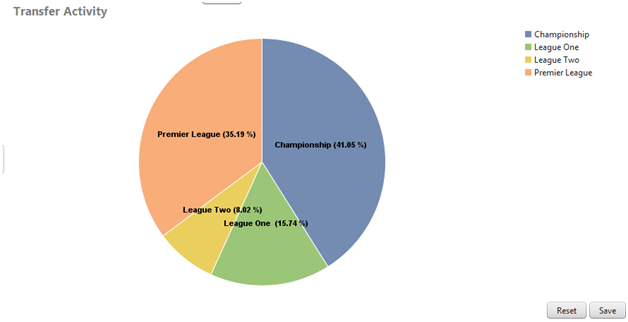 Interestingly if we contrast this view into value its clear how big the premier league actually is, league one and league two’s total doesn’t even make up a % of total transfer spend!

Lets add another data set to compare transfer value against performance with some simple calculations. I’ve added a new sheet with league position, points, trophies won and goals scored. Merging the dimension on the sold to club provides use with an extra level of analysis.

Of course transfers aren’t the only part of a football clubs performance over the season but it can give as a good indicator into who is spending their money wisely and over performing. As we can see from the following chart the points per pound calculations indicates: Clubs such as West Bromwich obtain some key loan signings  to perform throughout the season. 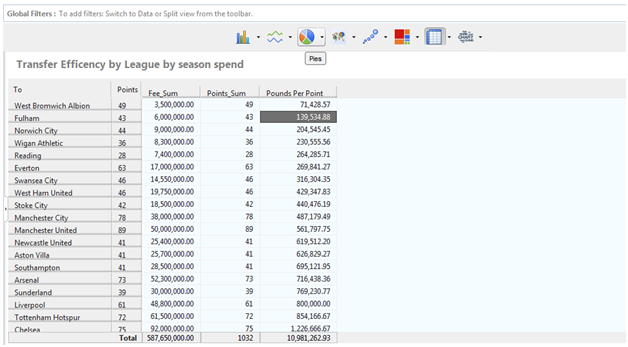 As we can see the following overview information has provided some nice analysis charts, though with some further data such as player nationality, net spend, individual player value, age, player pro zone stats, 10 year history would provide a enormous detail of analysis for football clubs, moneyball anyone?

Though what is clear is that Lumira offers an outstanding platform for users to quickly, intuitively and correctly understand their data offering further insight.

This is a great post and glad to finally see Lumira used for Premier League data discovery!  Is the source data something you have been manually maintaining or did you find an online source for the transfer details?

I noticed the color palette in the bubble chart gets a bit confusing with so many values.  My first reaction was that Huddersfield Town was the big spender there 🙂 ... fortunately Man City is listed on the legend as well so I suppose that's actually who the biggest bubble represents.

Best of luck to Cardiff this season and hopefully they can stay up!

Thanks for the feedback; the data is from a few EPL web sites which just show the player, transfer value type and club moment, I had to then manually add a few columns to get a better insight such as country and a few joins against the clubs performance form the transfer year. With only two years worth of data I think it’s still quite a light analysis if I could gain the granular details since the EPL started in 1992 it could offer
some great analysis, if you take the current 20 teams transfer history since
1992, it almost adds up to 6 Billion pounds worth  of transfers.

I think the best thing from the exercise is highlight the ease, simplicity and intuitiveness of Lumira it will really add value to a lot of our customers especially round geospatial specific data ,plus the EPL is a nice understandable data set to demo .

I think Cardiff will need all the luck we can get, lets hope they do stay up 🙂

Could you also do some scouting stuff on Lumira please? Might help my team Chelsea (in the future)!

If Arsene's watching this, he might just hire you!