SAP Lumira offers easy and creative ways to play around with data.A layman can just install and start using this tool without any tutorials. For Data Geek challenge, I have used Lumira to extract information out of the data on Olympic Medals sample data.

With SAP Lumira, I simply started working on the data set directly. Right away I was able to grasp the basic features offered by the tool.

So I started with my analysis of the data

How do the different countries stand in medal tally?

Before coming to countries, One needs to find which country does the winning athlete belongs to. But when I dug into the data, I was disappointed to that country was represented by some country code 😕 (Something like RU1, AHO,etc…). After some research I was able to find that these are IOC(International Olympic Committee) country codes. I found a list of these codes and got it arranged into an excel file.

From here it was a cakewalk. I was able to load another data set(along with the initial Olympic Data). Merge the two data set and get “Country Description” from the country codes 😀 .

Now, next thing was to find a way to count # of medals won by each country. But I could not put any of the available fields into the Y-axis as none of them was a measure. But after clicking here and there I found that I can convert existing fields into measures… 😎 …

After this I simply dragged my new measure into the graphical output. Which quickly gave me the total count of medal tally for all the countries for all the years.

Now one simple task remained of adding Country to the Output, which is nothing more than dragging and dropping these fields in the output. This gave me the following output screen. 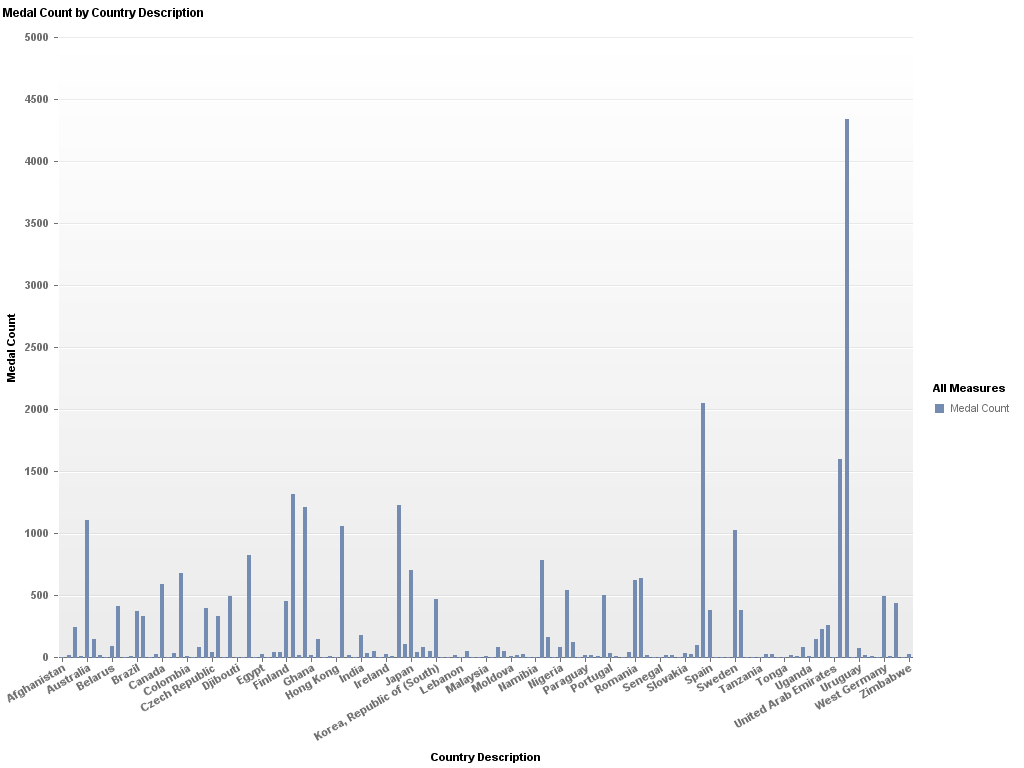 But this doesn’t look impressive right?

I thought to myself, How about a pie chart? 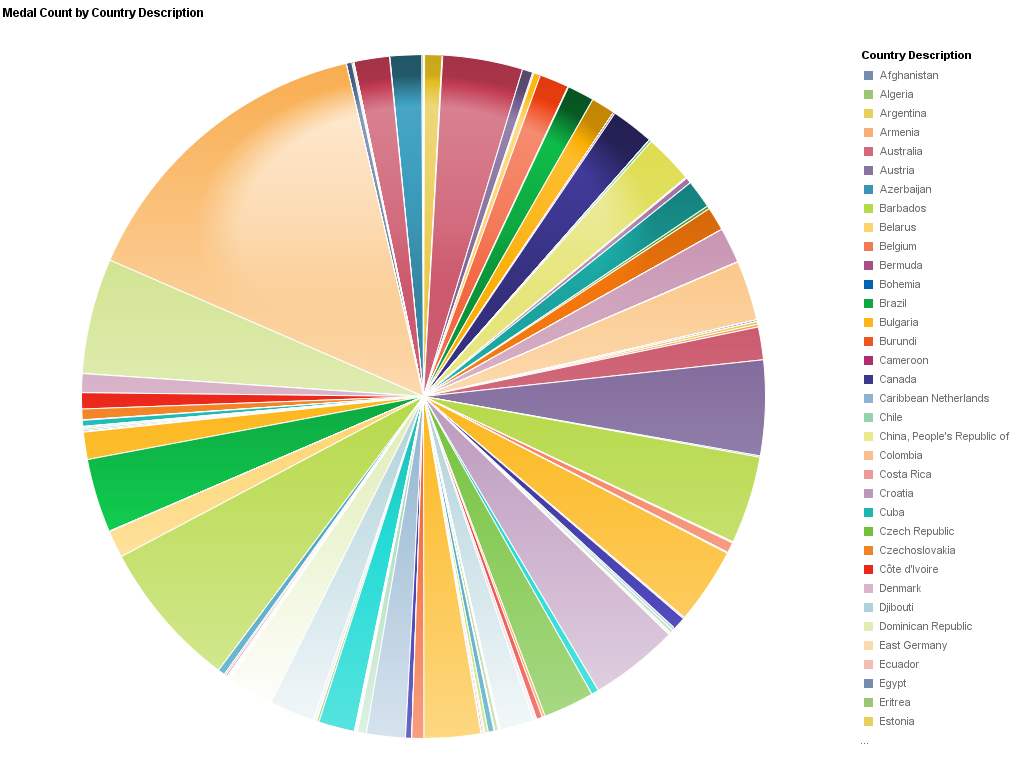 Now this is one gives a better picture. Moreover, If I hover my mouse over the report, I can see the percentage as well. 😎

Having achieved this I wanted a deeper analysis on largest medal grabbing country, United States of America. With this I come to my next question.

How has USA performed in Olympics over the years?

For this analysis, I knew that I need to filter the data for USA. But I was not sure how to achieve this? I was toying around and I clicked on the USA in the pie chart. I was able to see two new buttons on the screen. One is ‘Filter’ and other is ‘Exclude’. I click on Filter to find that I can now just see USA data. 🙂

Next thing was to get the Year into picture. Simple – Drag and Drop 😆 . Now I was getting hang of Lumira.

I changed the graph type again to Graph to have a better analysis of the data. 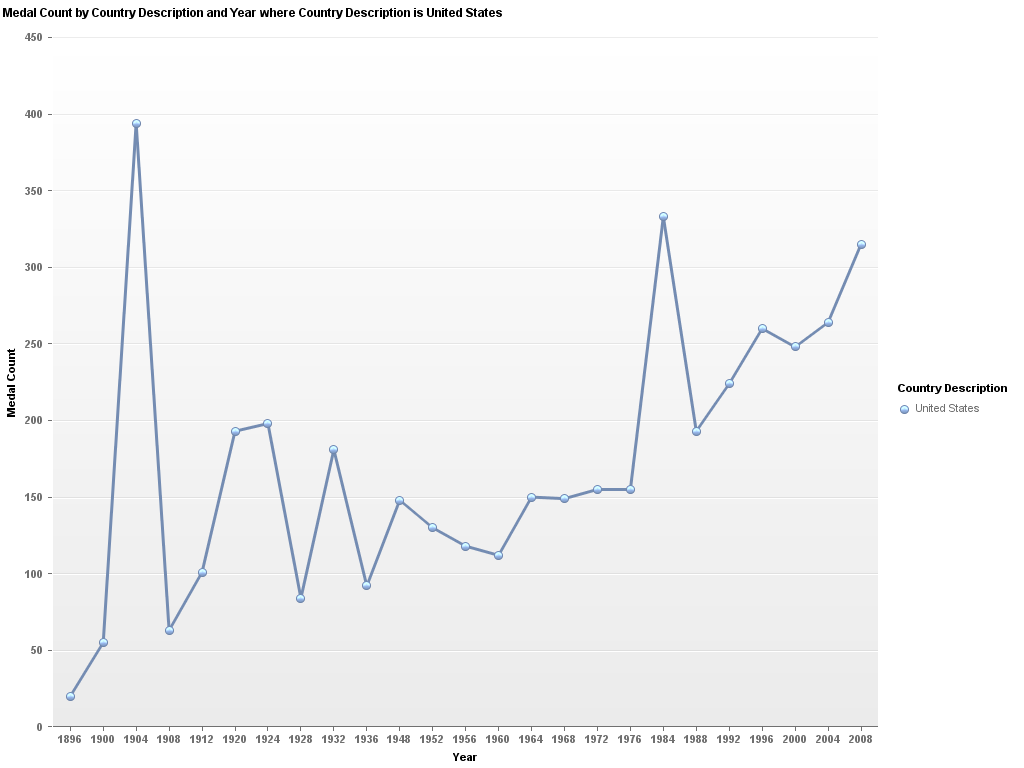 I got the countries’ medal tally already, I just added Medal Type and filter it for Gold. I get all the Gold medal tally for all countries.

After looking here and there, I found a way to restrict data for top 5 countries. In the measure Medal Tally I was able to add “Rank”, I ranked Top 5 Medal Tally based on Country Description to get this one. 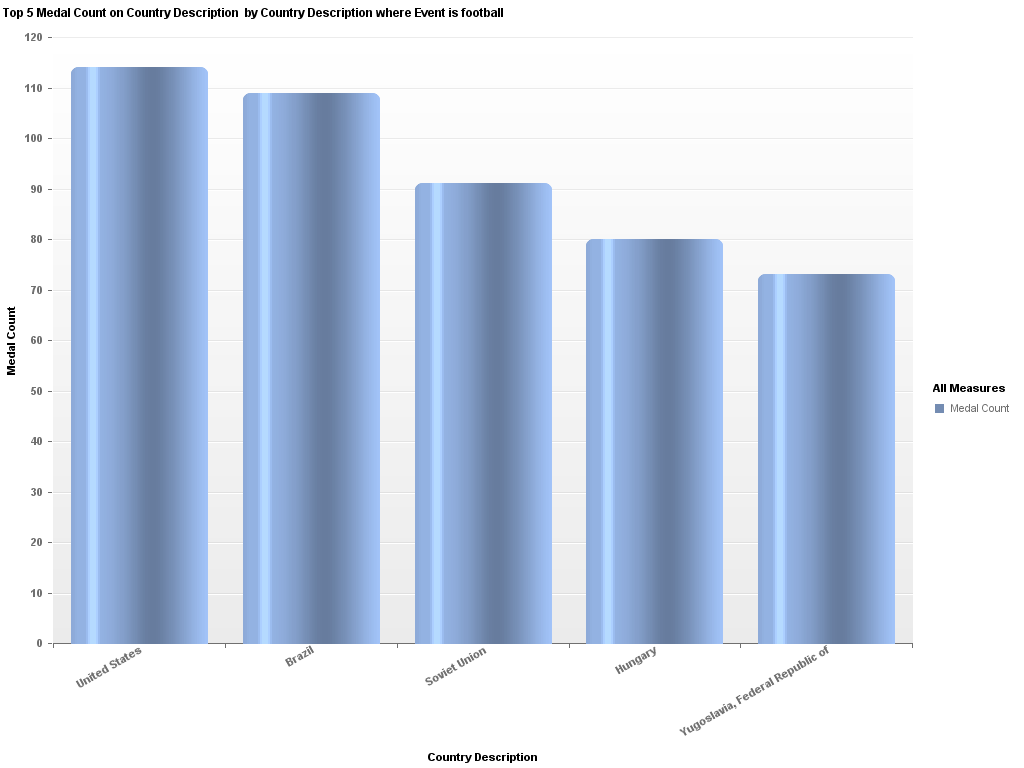 Top 5 countries in Olympics for the Event Football?

I filter the the data for Event Football, and rank top 5 countries. Now it sounds simple. Isn’t it? 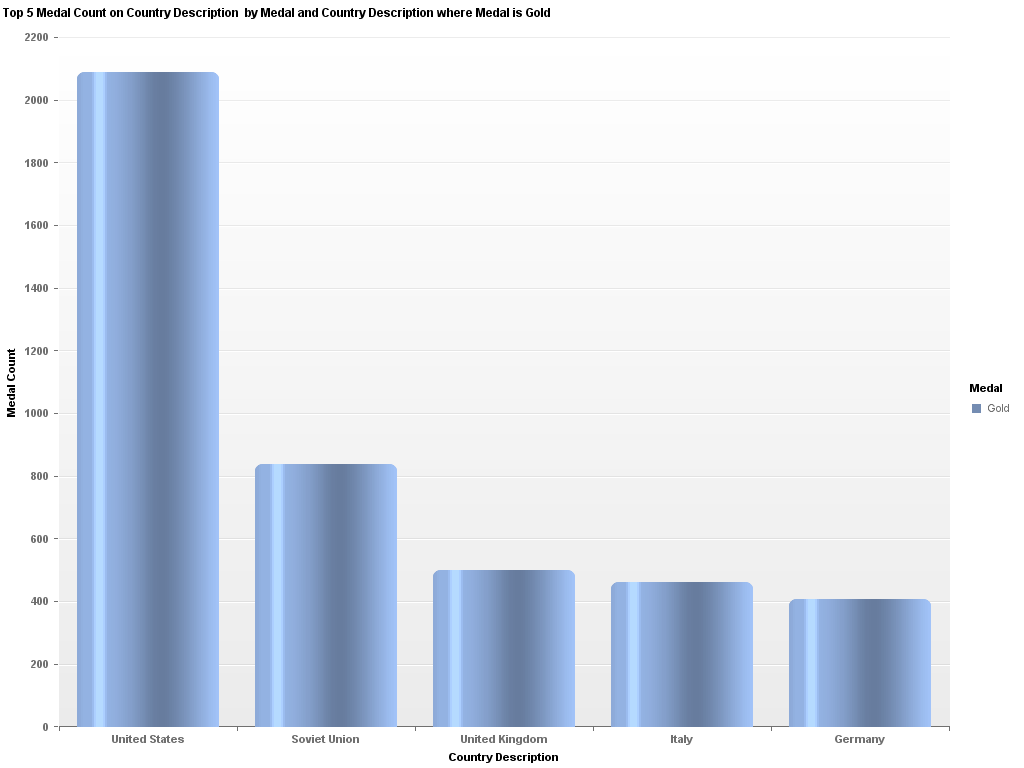 I thought to myself about going to the next level, Now I wanted

How much favorable is playing at home?

The question was a tough one as it does not directly speak about the stats. Home advantage is something that everyone knows about, but how to measure this? 😕

Let’s take total number of medals won as a measure of excellence in Olympics. Now I had to put one more field in the output which is Host Country, but I am not having this in my data set 🙁 , I have Host City instead. Lumira comes to my rescue. I was able to build a Geographic Hierarchy on the City field(Lumira builds the geography automatically). Though I did not really need Hierarchy, but I got an easy way to get Country data from ‘City’.

After this I was able to get medals won by each country , for each host country. 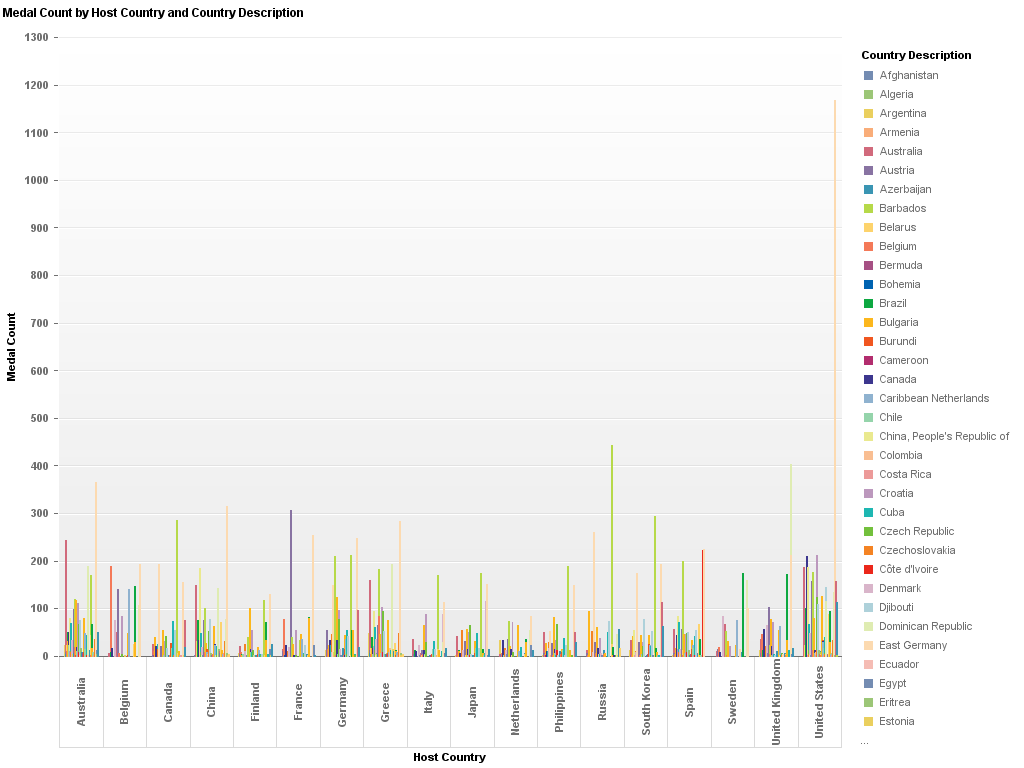 On Closer examination of the report, it could be seen that for each Host(barring exceptions), Home Advantage was tremendous

For example, when the Olympics were held at Moscow in Russia(then Soviet Union) the report looks like 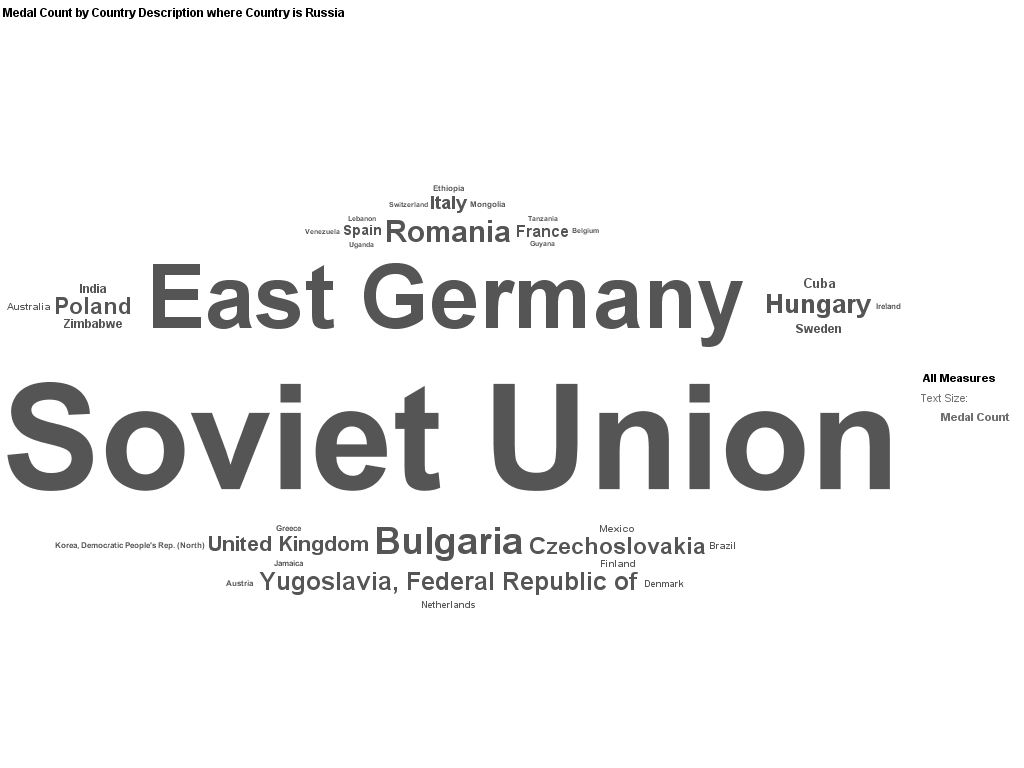 With this I come to the end. I came to the conclusion that one does not need to be a data scientist to analyze data on SAP Lumira and after taking on the data geek challenge I was able to get deeper analysis on the Olympic stats. This also took my interest in Olympics to the next level. Hope that my home country, India fares well in the coming Olympics at Rio…

I could go on and on thinking about different analyses and ways to visualize the data in Lumira… I couldn’t believe that I was a Data Geek already 😉 . 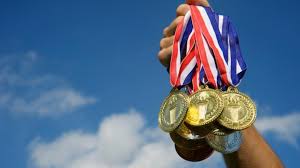