It is often very valuable to understand how to use this field to find out certain things about the MIC’s in the system.  Unfortunately, I have never seen an SAP help file or document that provides the means to decode this field and all the values for each character position.  I searched before writing this document and found several threads that explained parts of it and a few that had a list of the indicators, (actually, mostly old threads in various forums where I had responded!).  But I didn’t really find a good, complete document.  So I though it was time to put one up.

Knowing how to use this field can be especially valuable during spec writing, programming, data gathering, troubleshooting, verification of data loading, report writing, data analysis, and exporting to Excel or other external application, etc…

If you look at the field QPMK_STEUERKZ in any table view transaction you’ll see something like the screen shot below. 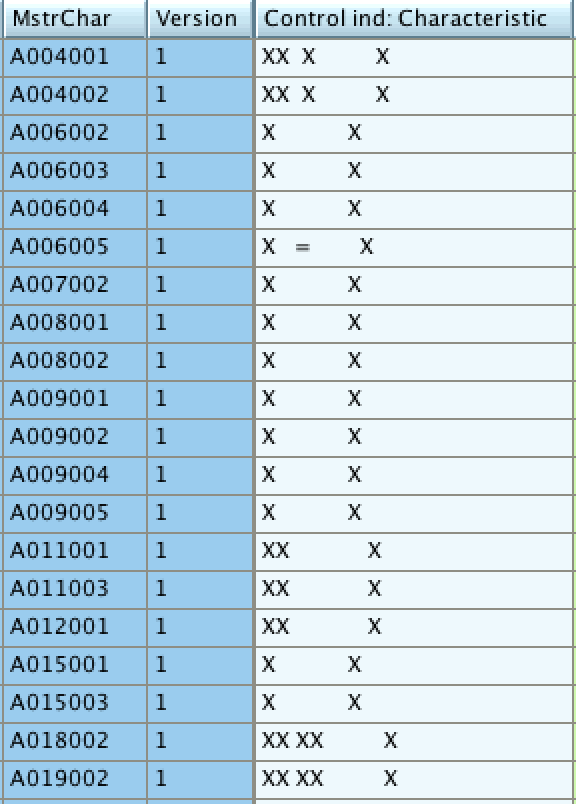 Each character of the field has meaning for a specific control indicator.  In most cases, the indicator is either selected (X) or not (null).  In a few cases, other characters might be used to indicated specific choices.

(Yes.. I know.. SAP could have just assigned 30 more single character fields to the table, given really nice help files on each field, and saved us a lot trouble from having to break this field apart and determine all the values for ourselves when ever we need to write a program.  But they didn’t, so get over it.  Plus it helps to keep consultants in business.)

Over the years, I have decoded MOST of the positional characters, but not all of them.  Some of the character positions I believe are not used and could be utilized for future releases.  Below is my list of the positions, their meaning, and notes on any special characters or usage that I am aware of.

Please… if you can add more information about any of the character positions or how they are utilized, or if you think I’ve gotten any of these wrong, PLEASE, let me know with a comment or message.  I will be sure to update the chart and credit the person making the contribution.  It would also be nice for folks to leave comments on how they used this info.  Was it in a report?  Data extraction?  etc..

Thanks!  I hope you find this information valuable.

* Inferred from Table TQ27 and related F1 help.  I was not able to directly verify these fields by setting up MIC’s to reflect these values and then verify directly in the table QPMK.  But I believe them to be correct. – Using the TQ27 to figure out the ones I had missing was suggested by Martin Hinderer.  Thanks Martin for the suggestion to help fill in some of the fields.

** updated from information from Marc Werner.  Thanks Marc!

I read once that table TQ27 contains the information on this field. There is e.g. the information that for position 10 the setting "Synchronisation is active" is set (fields of this table seem to be in the same order as within the STEUERKZ).

Maybe this helps to complete this document?

Thanks Martin!  It looks like the fields match up with the control indicators but some of them I don't know how to actually confirm.  So I'm going to mark these as having been inferred from the table TQ27.

Thanks for the lead!!!

Good one.. I used to refer only first 2 fields to differentiate Quant. & Qual. Characteristics. Its nice explanation about all characters.

Of course, its bit tough to come across all characters.

Fantastic work Craig. Never thought of even exploring about such table. Only known thing to me was that we made the master data for MICs with several X but did not know about their significance in so much detail.

Thank you Nitin.  I hope it comes in handy someday for you.

please have a look to documentation on the report RCPTRA01.

We used this documentation for copying inspection plans from our old system (VAX).

Yes, I've used that program.  But that doesn't really have anything to do with this topic does it?

That does have a fairly thorough overview of the control indicator settings...

I'll go through it again but I didn't see where it explained how the values were stored.  I might have missed something though.  Wouldn't be the first time!

Interesting....the relevant section starts with  "BIPMK - Inspection characteristics" and does contain information about characteristics for operations in inspection plans beeing loaded to the system (so to my undestanding not referenced MICs, but ones directly added to the plan).

I agree to John's statement, but it raises some questions. Lets take a look at inspection scope (Position 7):

The information in this document here states : = is Fixed, + is Larger, - is smaller, Null is No Scope

The information in the upload program documentation states:

This indicator can have various values:

I would assume therefore that the program uses a different syntax than the SAP table where the information is stored. Nevertheless it might add some more value to this SCN document. To be verified...

I did some more investigation:

I am not sure how the values + and - came into the document, I would assume that Craig provided them with the initial version? Which brings me to the assumption that in this case either both values (+,- or <,>) are working, or that we might have to correct this here. Within the system I am having here the table QPMK has (<,>) at this position.

Craig S can you confim that?

I will try to double check that this week.  The values I have posted came from a document I had for my own personal use from several years back.  Possibly as far back as 3.1 or 4.0.

Is it possible that SAP changed these along the way?  I'll see what I can find out.

IN QPMK-STEUERKZ i have found value 'XX   ' I know it is a quantitative indicator.

Another case is 'X    ' it is a qualitative indicator.

So what is the first char???

No.  the first character is qual or quant.

In below examples I use ^ to represent a null value.

X^ is Quant  with "record measured values" not set.

^^ is Qual with "record measured value" not set.

I do not believe you'll find the condition of ^X which would be Qualitative with "record measured values" set.

If you do have a qualitative characteristic where QPMK-STEUERKZ starts with an "X" in the first characteristic I would be very interested in seeing the QPMK entry in a screen and a second & third screen shot seeing the 1st and 2nd page of control indicators.  Making sure that in all screen shots you can see the mic and version numbers.  But your QPMK table example MUST be exported to Excel and displayed in a non-proportional font.

Be very careful when you display and look at QPMK-STEUERKZ.

In this shot it looks like the first characters X for both the quant and qual MIC.

This is the same data exported to Excel.  The Excel sheet is using an Arial 10 font by default.

In this screen shot, I selected column E and changed the font for that column to Courier New 10.

Thanks Craig for your explanation.

Now it's much clear.

So i can move  qpmk-steuerkz to structure QMKST and have result.

I have no clue about the moving this stuff to a structure as I'm not an ABAP'er.  But I would assume you can copy it into a structure and than parse it as needed to use the data.

I bellieve the standard function module QSS0_QMKST_RQMST can help...

If you fill in the import parameter QMKST_IMP using same values and positions of QPMK-STEUERKZ like below:

After executing this function, it will give you the translation in the export parameter RQMST_EXP: 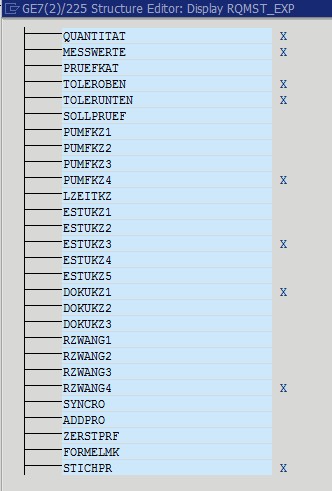 Fantastic!!  You mentioned this could be valuable "one day"... This was valuable TODAY!!!

It will also make it easier to download (read) the data when using SE16 instead of SE16N.

I'm not sure what point you are trying to get across.

I think you mean that when programming you can use structure QMKST to pull out the values of the control indicators from those three objects?  Is that what you are saying? That was discussed I think in the comments above by Vicente.

All three of those objects can have different values depending on configuration and design.  The values in QAMV and PLMK are copied in when those objects get created.  PLMK values can change if the MIC is unlocked in the plan and control indicators modified. QAMV values will reflect the settings the time the QAMV record was created.  PLMK or OPMK values could have lone since been changed/modified.

The blog was originally intended to provided info on how to read this data primarily via table review in SE16. Not via programming.  To write a report, yes the programming structure can be used.  But I had often been asked where this data was stored.  Hence the blog.