Can Your Birthday Help You Play Major League Baseball?

As a follow up to my last blog, 6 Ways That Numbers Can Lie To Us, I wanted to investigate a fascinating phenomenon about how one’s birth month relates to success in professional sports. The book Outliers by Malcolm Gladwell found that a disproportionate number of Canadian-born National Hockey League players were born in the first few months of the year.

I wanted to see if a similar pattern held true for Major League Baseball players, so I did some quick analysis. The chart below shows the birth month of every U.S.-born MLB player who played from 1965 to 2012. The results and implications are pretty interesting. 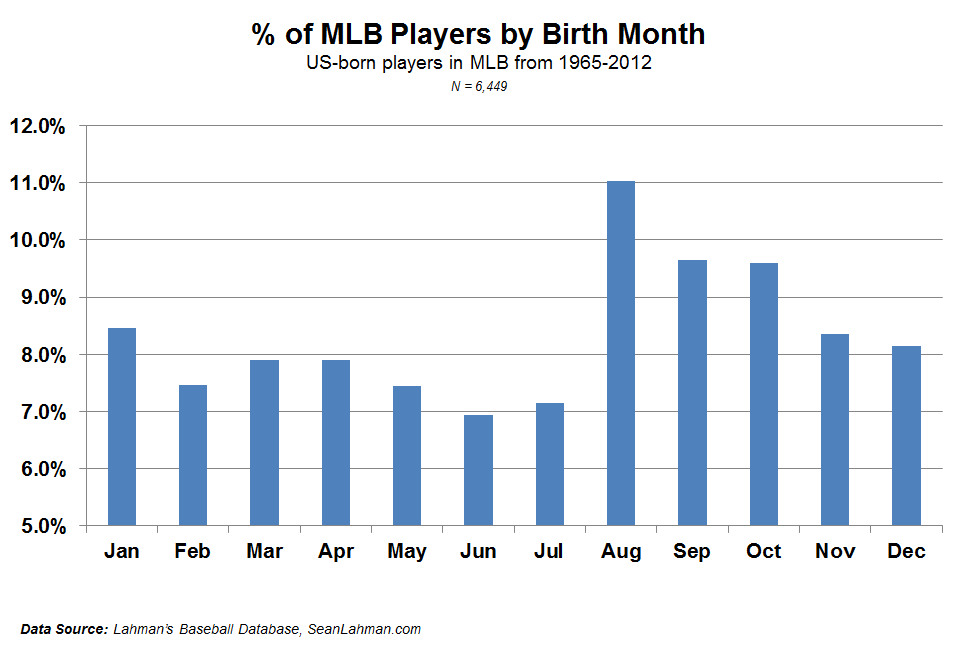 What Does This Chart Say?

Based on a sample size of 6,449 MLB players, 11% were born in August compared to only 7.1% in July. September and October also have relatively high percentages. Furthermore, the overall rate of US births is more evenly distributed across all 12 months. So why are so many professional baseball players born in August-October?

Why Is This Happening?

This could well be an example of a self-fulfilling prophecy. In the United States, the Little League Baseball cutoff date (until 2006) was July 31st. This means that kids born on, say, Aug. 1, 1990 were playing in the same league as kids born on July 31st, 1991. In other words, the August babies were almost 1 year older than those July babies, but playing on the same team. For little kids, that age gap can mean a huge difference in physical maturity and achievement on the field. When it comes time to pick the all-stars and tournament teams, the older players will often be selected because they are simply the biggest and strongest. This puts them onto an “accelerated” path, which includes better coaching and training, more practice time and more competition against good players. Many years later, those kiddie All-Stars actually do become the best players because they’ve been placed in the best possible environment to succeed since they were little.

Note: In 2006, Little League Baseball changed the cutoff date to April 31, so in a few years we’ll be able to refresh the data and see if there’s now an advantage for kids born in May 🙂 .

How Does This Apply To Business?

While technology can do incredible things, it’s the human element that still matters most. In this case, an arbitrarily chosen end point (the cutoff birth date) had a long-term, systematic impact on the success of a group of people. Similarly in business — as we enter the era of big data — your information will always be bound by specific parameters.

Make sure to always question whether those parameters are arbitrary or based on sound analysis. It could have a significant impact on the quality of your decisions.

The other important lesson for business is that great employees are made, not born. Do everything you can to put them in a position to succeed, and you can reap the benefits.

This may explain why my older brothers, who played baseball for years while growing up, didn't make it.  They were born in May and December.

They did have a fellow baseball player who did play for the Kansas City Royals for a little while, and I am not sure when he was born.  I will have to ask.

I wonder if the same is true for NFL players.  Interesting!

"important lesson for business is that great employees are made, not born. Do everything you can to put them in a position to succeed, and you can reap the benefits."

I have rekindled my love of baseball most due to my son who has played little league for the last years (he just turned 7).  It appears the odds of playing in majors are stocked against him given he has a March birthday and is one of the youngest on the team but you never know 🙂

Thanks, Jarret. Glad you liked it!

One of the things I'm interested in studying is how those "younger" players perform once they get to the majors. There was a recent study on NHL hockey players where they found that those younger players did significantly better than their "older" counterparts once they actually entered the NHL. So there may still be hope for your son 🙂

It's the effect of competition making you stronger, IF you get through.

This applies to individuals as it does to businesses. That's why weak industries protected against foreign competition get weaker and weaker over time, because they lack creative destruction and create little incentive to improve.

Interestingly that looks heavily weighted to the school / academic year.

If you were born in August / September you will be the oldest player in your academic year by quite a margin.

Thus potentially up to 8 months more physically advanced than other players at the time, meaning a stronger body etc and a physical advantage !

Those born in April / May / June will be the youngest !

Never mind the baseball leagues, i would suggest this could be applied to most sports !

Thanks for your thoughts. This "birthday bias" effect has also been shown in Canadian-born NHL hockey players. However, the months that are most prevelant are January, February and March, because the cutoff date for youth hockey in Canada is January 1st. See a detailed description here.

The same is also true for European soccer (see here).

There is no European Soccer, Chris. It's "Football" (as opposed to "American Football", which doesn't seem to involve much foot anyway 😉 )

Otherwise: Excellent points to provoke some thought about interpreting data!