By next June soccer matches from the 2014 FIFA world cup Brazil will be the topic of discussions everywhere, we should be prepared to impress friends and family of our soccer knowledge.   Thanks to SAP Lumira let me give you some FUN facts that will come handy in a crowded room of fans watching a game or while trying to impress your colleagues or spouse.  Actually, let’s go even further; let’s use SAP Lumira with the FIFA World Cup data of tournaments since 1930 to suggest the Quarter finalists and even the semifinalists in 2014.  I should point out that is taken more time for me to write this blog than downloading, installing and using Lumira, good one SAP!!

Let’s start with the FUN Facts 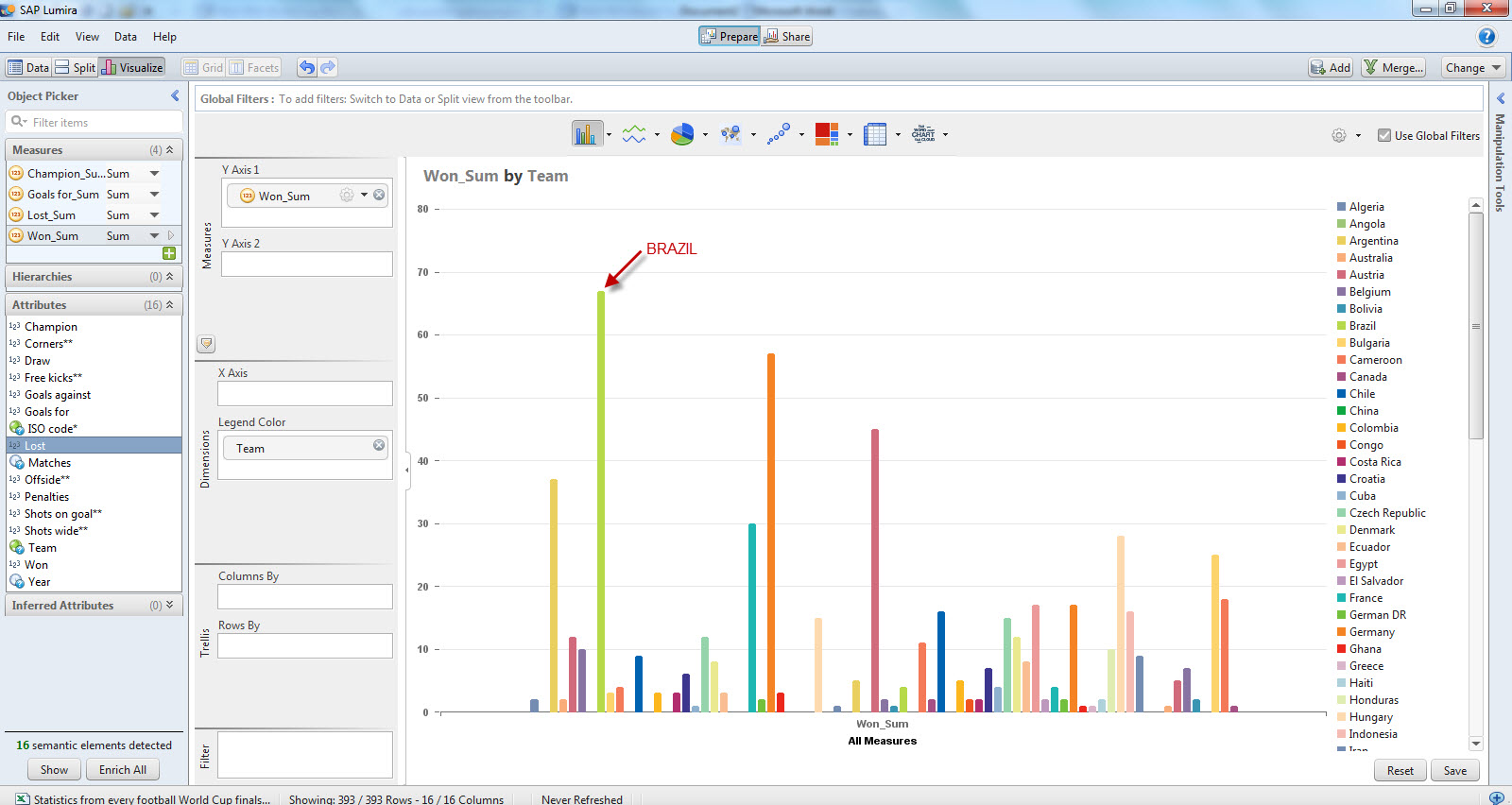 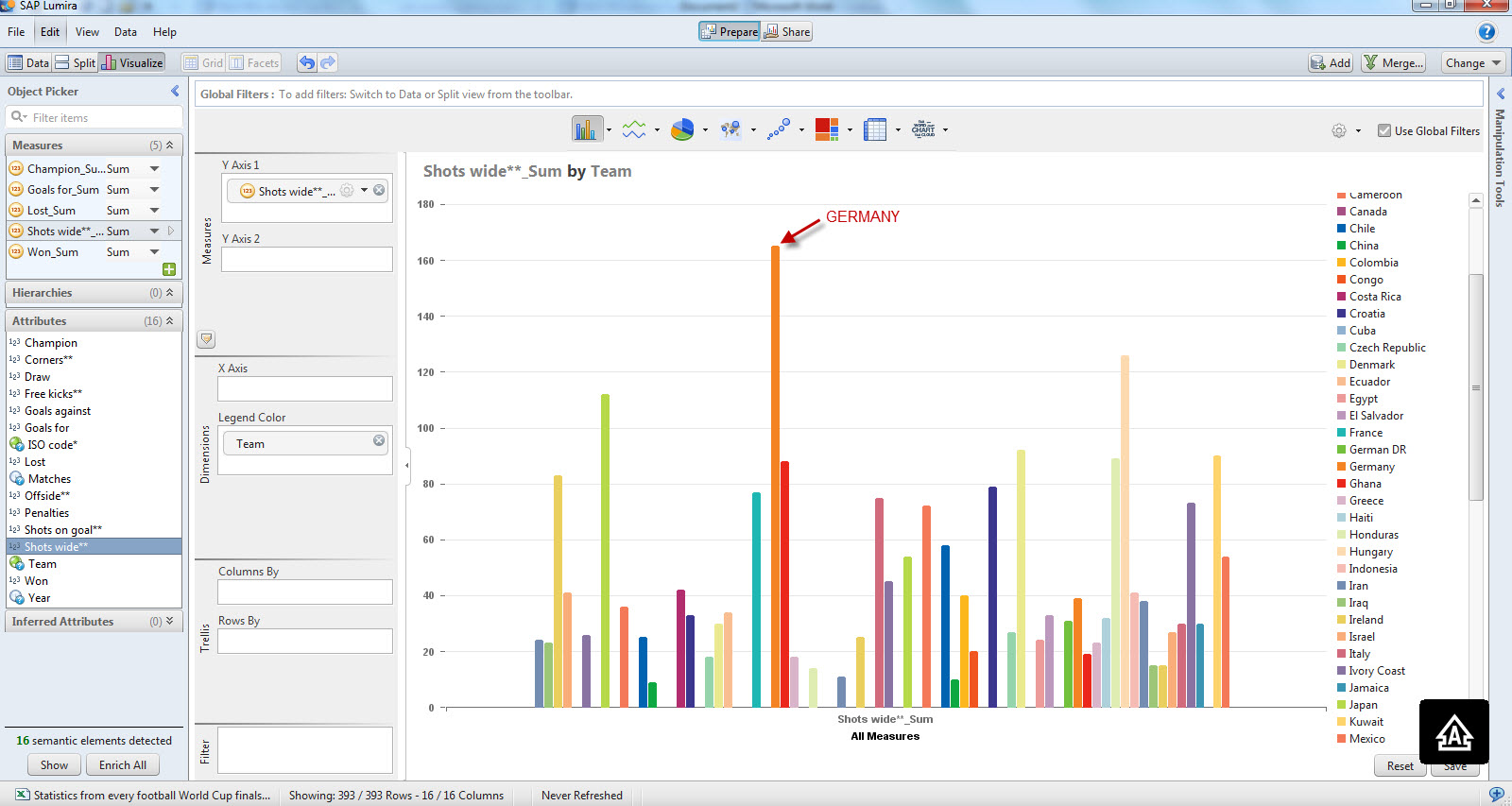 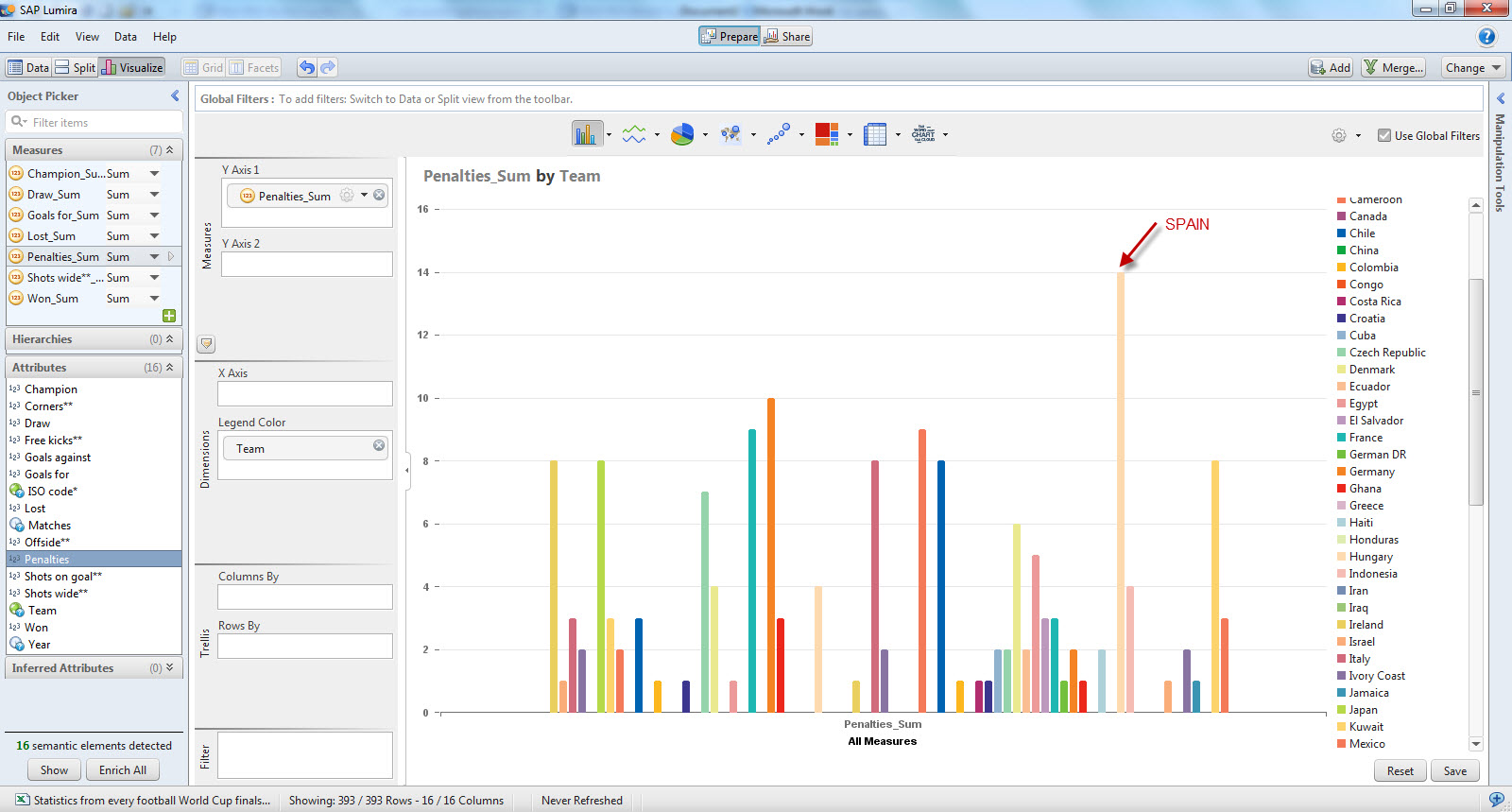 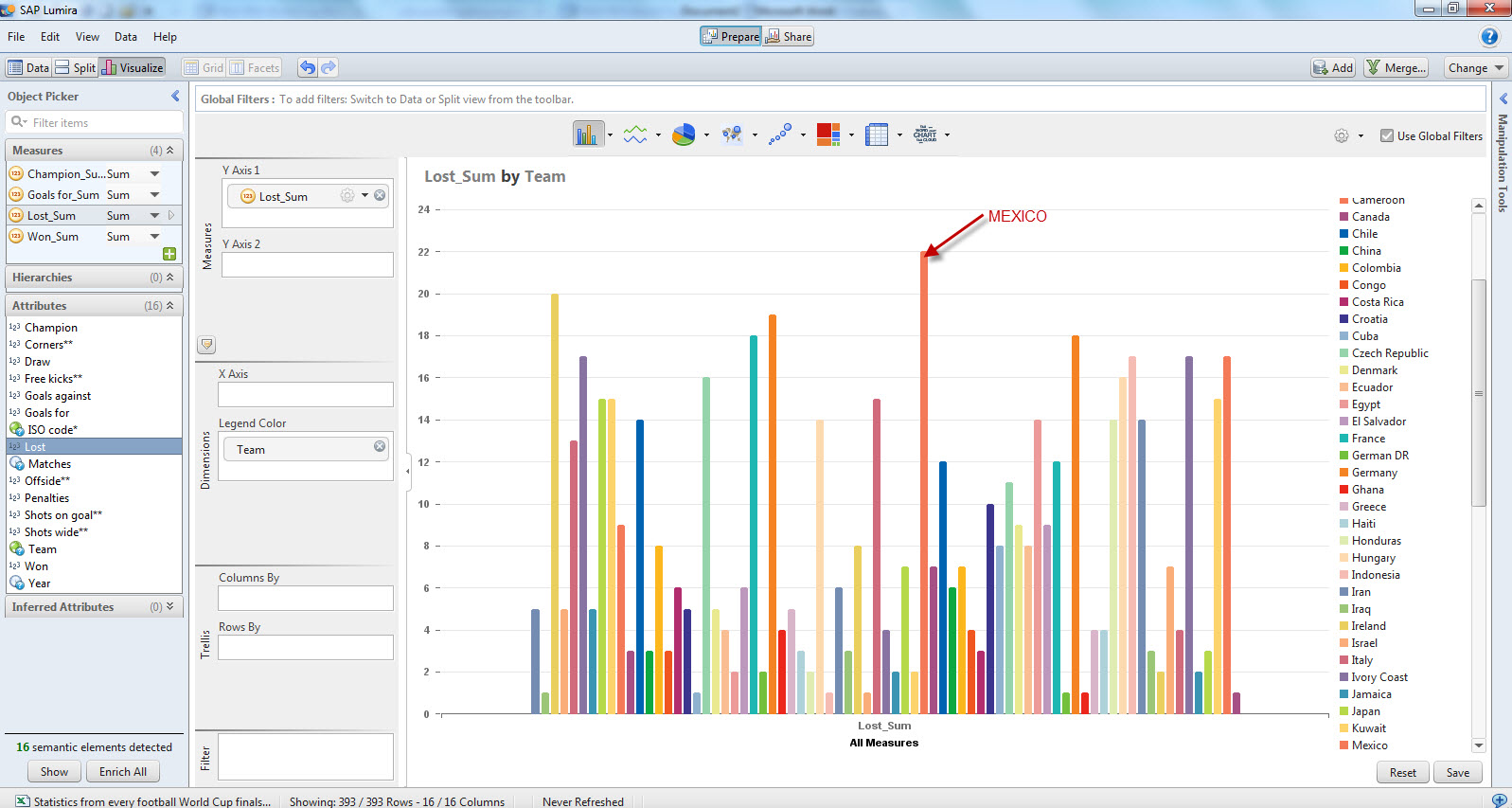 Let’s be very un-scientific and try to pick the 8 semifinalists, the data since 1930 is very limited but we can try. If you look at the sum of goals for add the sum of won games, then add championships won, best performers are the following 8 teams

Just for fun I looked in the Fifa site to find out who is doing well in the qualifying games and Netherlands looks very strong.  So I go with Netherlands. 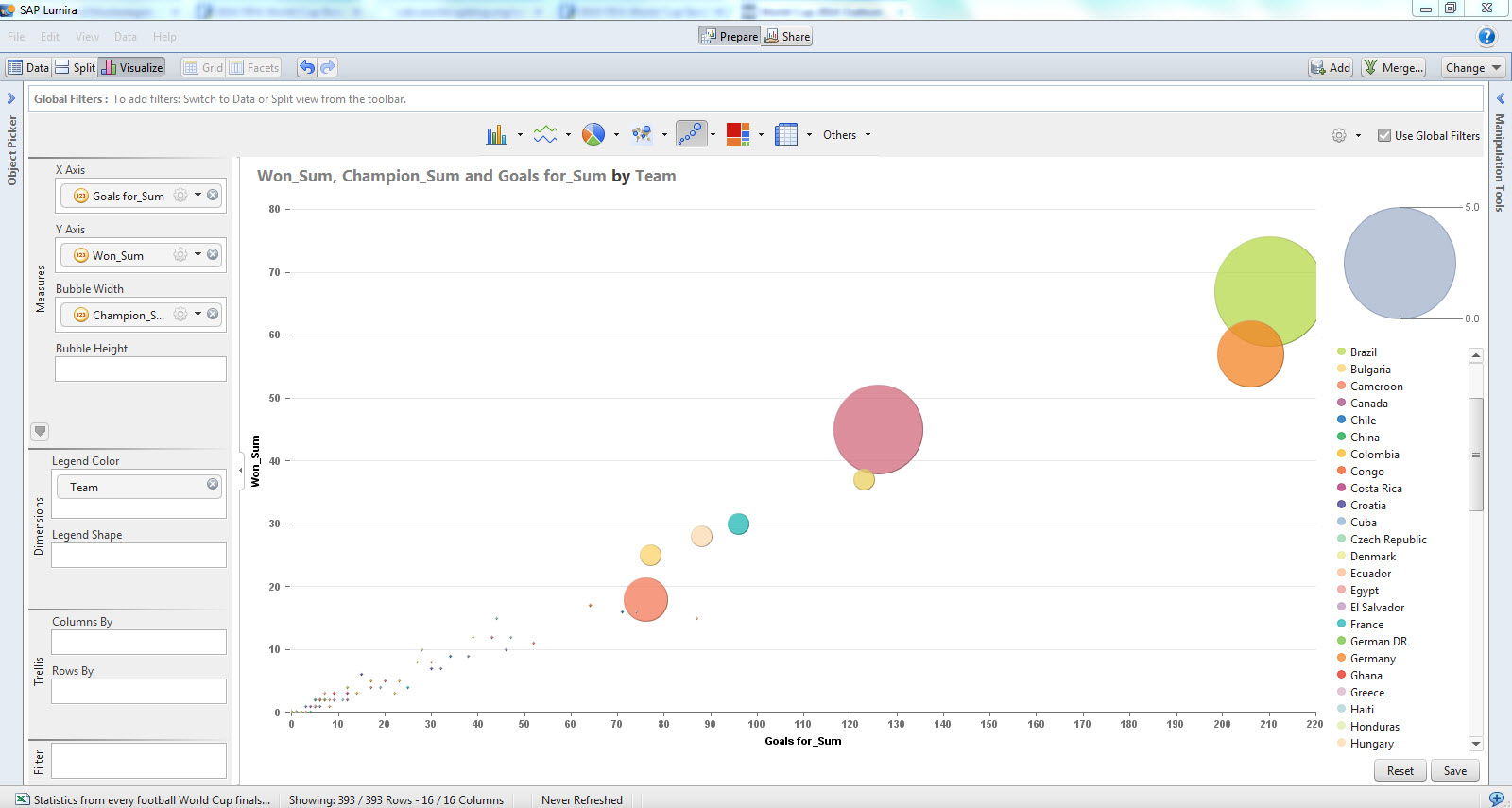 For the Quaterfinals if we compare the sum won games vs lost games and add teams that have won championships.  Then, look at the ones that have performed above average we see that the semifinal could be. 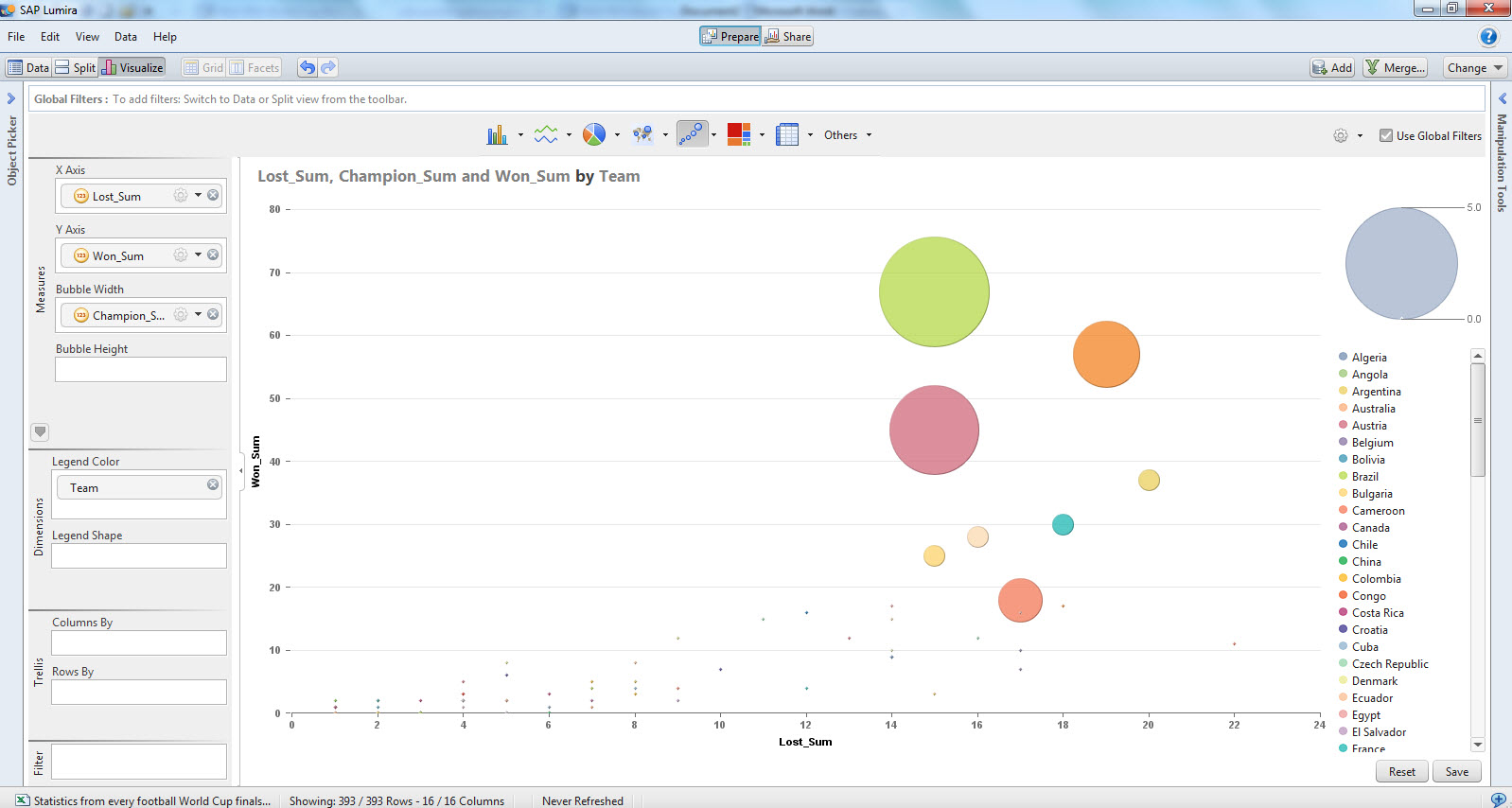 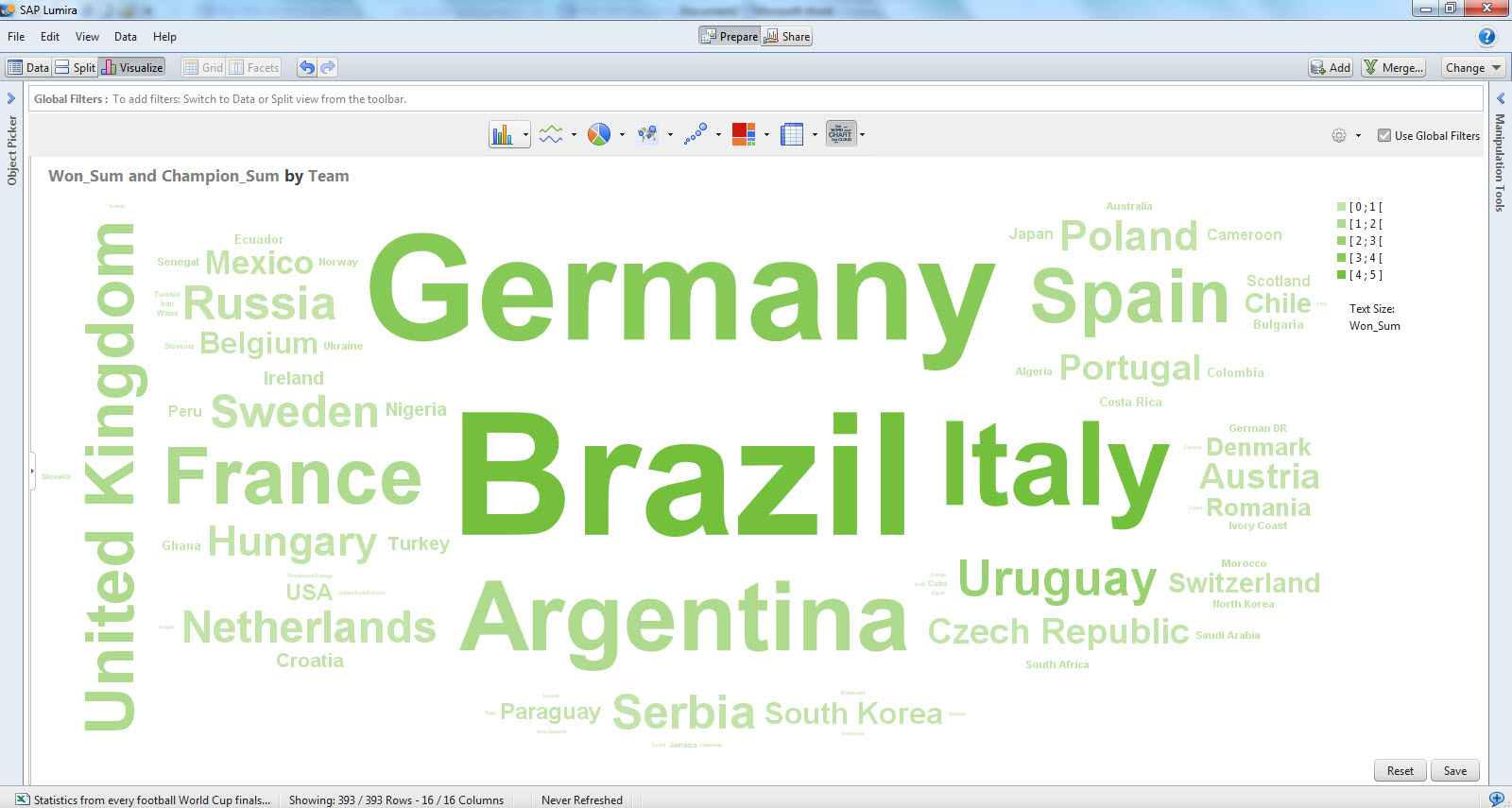 Feel free to reach out to me if you would like to have the FIFA data file, I cleaned it up and I will be glad in sharing.  Maybe I will give the SAP Predictive tool a try a friend told me that I could potential do a Mutlivariate Regression Analysis with some statistical tool to do a better estimation, the name itself makes me to run away but maybe the SAP predictive tool will be as cool as Lumira.

this is good too. One more interactive analysis sample. thanks for this Kenny

Great Blog... This could be quite useful next year, when we will be surrounded by soccer talk.  Excellent data for analysis.

It'd be good to have some trend analysis, since very old historical data is not really as informative as the current trends. For example, you mentioned the qualifying matches data from FIFA, which is quite relevant I'd say. Just remember that the host doesn't participate in the qualification, so you won't see Brazil in those statistics. 🙂

You are right. Unfortunately the only data I could download from the FIFA site was historical, worldcup data since 1930.  It would have been great to do some analysis on current trends.

Nice!
The problem for us (Brazil) is the Olympics 2016: Analysing the 2012 Summer Olympics medals with SAP Lumira 😆