Getting an Update on BI4 Maintenance Strategy – ASUG Webcast

Christopher Vozella and Saroj Parmar, SAP provided this ASUG webcast earlier this week. They discussed how SAP delivers fixes for BI4, and what is the strategy points behind it. 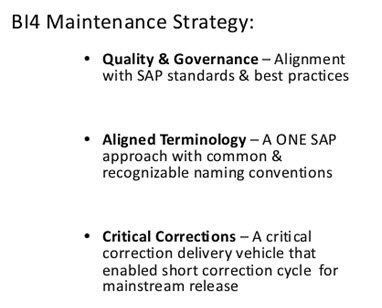 Figure 1 shows an overview for the maintenance strategy

How align with SAP across products – first requested item

What are the standards, including the quality and governance program; this is why SAP does ramp-ups 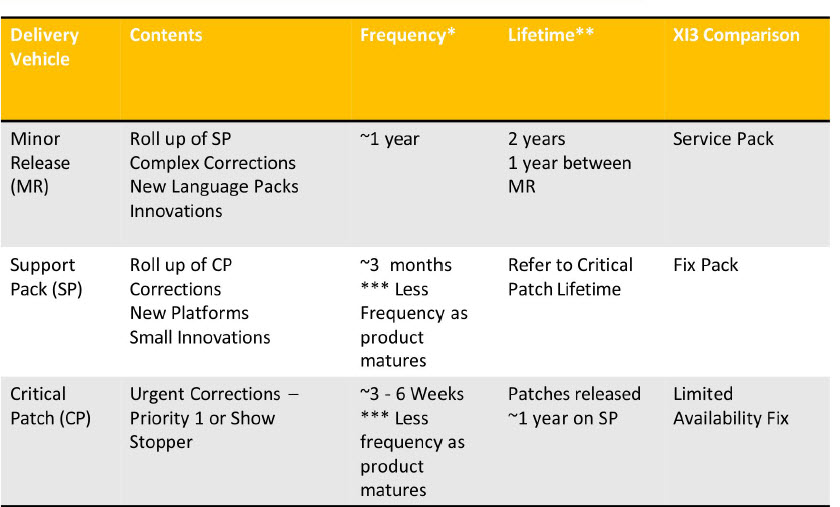 A minor release is a larger release/rollup of SP corrections, generally around 1 year, with 2 years support with a 1 year between a minor release 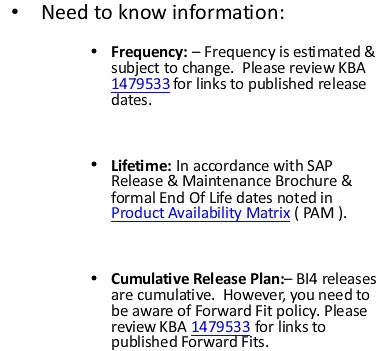 Frequency is an estimation. Review the KBA will give you information on the published release dates.  Customers will put messages in – this is the KBA to check the guidance.

Lifetime is a common question.  How long will SAP support my product?  Use the Product Availability Matrix which has formal EOL dates for the products and for the maintenance life cycle.

If you have a go live issue is covered KB 166157 outlines requirements.

Business case needs to be included. Always go through a message, Chris said.

When a critical patch is raised, coordination occurs with development and IMS. Figure 5 shows the Patch Priority Paradigm, which is a visual representation of low to high.

Minor releases should have the highest number of releases. 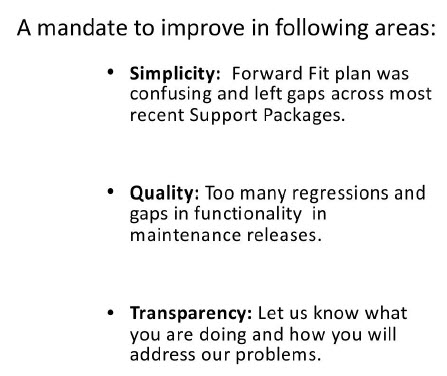 Figure 6 shows their 2013 focus, including simplicity around Forward Fit plan.  SP4 and 5 was confusing.

Forward Fits should not be complicated, says Chris.  They are simplifying the Forward Fit plan starting with SP6

With transparency, they are still making improvements to Service Marketplace

Saroj said they received strong feedback from customers about regressions, as a result they made changes to Forward Fit plan to address this.

Starting BI4 SP6 they made changes to Forward Fit.

Every fix on previous fix on SP get forward fitted to the highest SP and patches (see Figure 7).

Customers should not have to think about it – take the latest release and not lose any fixes.

The patches delivered on previous lines get forward fitted to unreleased lines.

Anything on 5x 6x get Forward Fitted to SP7 line.

Patch 6.1 is where SAP got caught up. 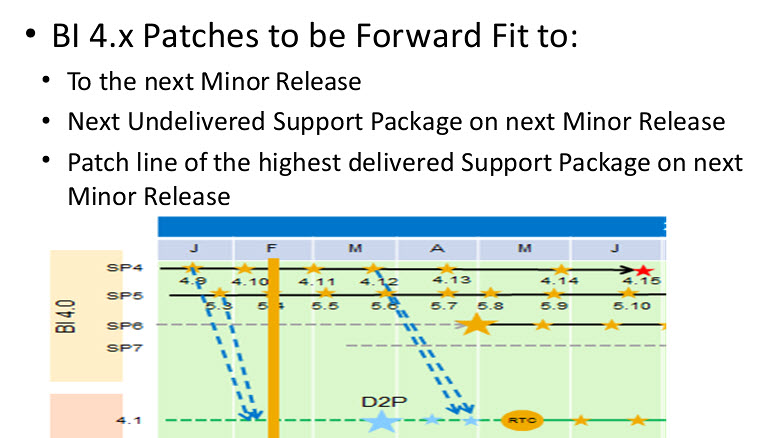 Patches are delivered to the highest patch line

There is a code cutoff; there is a period in the project release lifecycle where they stop taking changes in that maintenance line.

During that time, there is no new changes that go in; there may be a time period where patches are missing due to code cutoff period to stabilize the release.

These changes will get forward fitted to the first patch to “catch up”.  There is a maximum gap of 3 weeks when it is released. 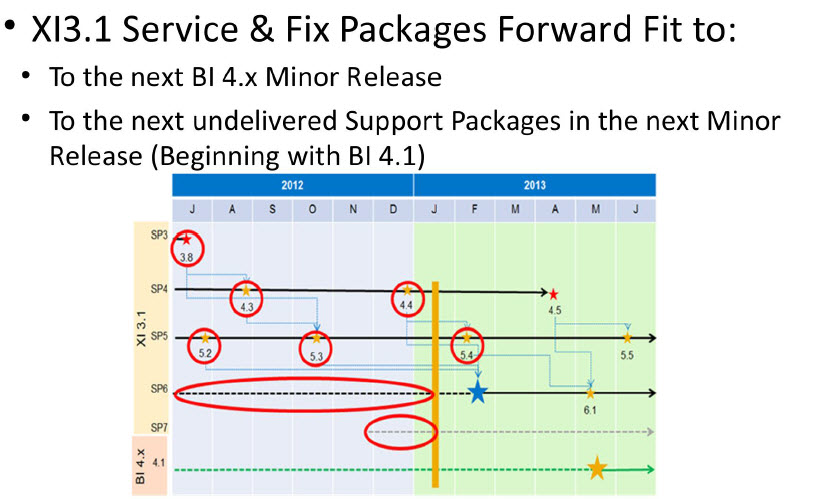 SP’s are cumulative; if you take SP1 you can jump straight to SP6 – you don’t have to go sequentially in 4.x

Patches are cumulative as well.

Q:  When we have to patch hundreds of workstations (eg. Clients, CR4E, CR-2013, etc)  in different regions for our Company…is it “Best Practice” to patch the BI Platform Servers first, then the desktop clients.? Any risk / issue with having the out-of-SYNC.?

A:  good question.  Best practice is always to keep them in alignment.  I believe we have a KBA on the topic – will double check.  There will not always be a problem when not in synch but definitely a best practice.

Q:  Which SPs and FPs are included in SP7? What is the cut-off for Sp7?